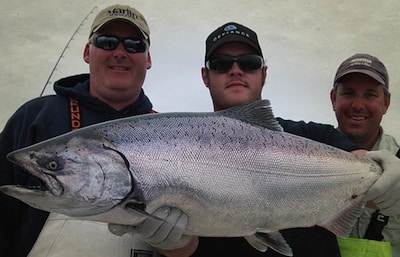 Fishing opportunities look promising for chinook salmon in Washington’s ocean waters and the Columbia River, as well as coho in coastal bays and rivers, according to preseason salmon forecasts.

Forecasts for chinook, coho, sockeye and chum salmon mark the starting point for developing 2012 salmon-fishing seasons in Puget Sound, the Columbia River and Washington coastal areas. The forecasts were developed by the Washington Department of Fish and Wildlife (WDFW) and treaty Indian tribes. Fishery managers have scheduled a series of public meetings over the next few weeks to discuss potential fishing opportunities before finalizing seasons in early-April. A meeting schedule, salmon forecasts and information about the salmon season-setting process are available on WDFW’s website at wdfw.wa.gov/fishing/
northfalcon.

“Over the next few weeks, we will work with tribal co-managers and constituents to establish fishing opportunities on abundant runs of hatchery salmon while ensuring we meet or exceed conservation objectives for wild fish populations,” said Anderson.

Anderson noted that state budget reductions over the past three years are also a factor in designing fisheries that can be managed effectively with a reduced staff. State general-fund support for WDFW has been reduced by $38.2 million, or nearly 40 percent, since 2009.

As in past years, salmon-fishing prospects in 2012 vary by area:

More than half of the chinook anticipated this year — about 353,000 salmon — will be “upriver brights” headed to the Hanford Reach area and the Snake River. That would be the fourth largest run of upriver brights since 1964, when fishery managers began keeping detailed records, said LeFleur.

While the chinook run is expected to be up, the forecast of 317,000 Columbia River coho is about 45,000 fish below last year’s projection.

“I’m expecting salmon fisheries to look a lot like last year,” said LeFleur. “We had some great fishing in 2011, especially for fall chinook in the mainstem upstream of Buoy 10. Anglers fishing that section caught a record 28,300 chinook last season.”

• Washington’s ocean waters: Nearly 191,000 hatchery chinook are expected to return this year to the lower Columbia River. Those salmon, known as “tules,” traditionally have been the backbone of the recreational ocean chinook fishery. The 317,000 coho salmon bound for the Columbia River also account for a significant portion of the ocean catch.

“It’s still early in the process, but we will likely have an ocean salmon fishery similar to what we have seen the last two years, when we had an abundance of chinook in the ocean but low numbers of hatchery coho,” said Doug Milward, ocean salmon fishery manager for WDFW.

• Coastal bays and rivers: Strong returns of wild coho salmon are expected this year to many of Washington’s coastal streams, including the Queets, Quillayute, and Hoh rivers, as well as to Grays Harbor and Willapa Bay area rivers, said Pat Pattillo, salmon policy coordinator for WDFW.

“If the wild runs come in at forecast, fishing opportunities for coho in those areas should be great this year,” he said.

• Puget Sound: Overall, coho returns to Puget Sound are expected to be lower than last season. About 732,000 coho are forecast to return to Puget Sound streams, 249,000 below last year’s forecast.

But there are some bright spots for coho in the Sound, including returns to the Nooksack and Samish rivers, said Steve Thiesfeld, Puget Sound salmon manager for WDFW. Coho returns to those two rivers are expected to total about 88,000 fish this season.

Thiesfeld said another bright spot for anglers is Baker Lake, where an abundant sockeye salmon return of about 35,400 fish is expected this season.

Meanwhile, summer/fall chinook salmon returns to Puget Sound are expected to total about 224,000 fish, slightly below last year’s projection of 243,000. The bulk of that return is hatchery chinook.

To protect low returns of wild chinook to the Skagit, Snohomish, Stillaguamish and Green (Duwamish) rivers, fisheries throughout Puget Sound will likely be limited to those that focus on hatchery chinook, said Thiesfeld.

State, tribal and federal fishery managers will meet March 2-7 in Sacramento, California, with the Pacific Fishery Management Council (PFMC) to develop options for this year’s commercial and recreational ocean chinook and coho salmon fisheries. The PFMC establishes fishing seasons in ocean waters three to 200 miles off the Pacific coast.