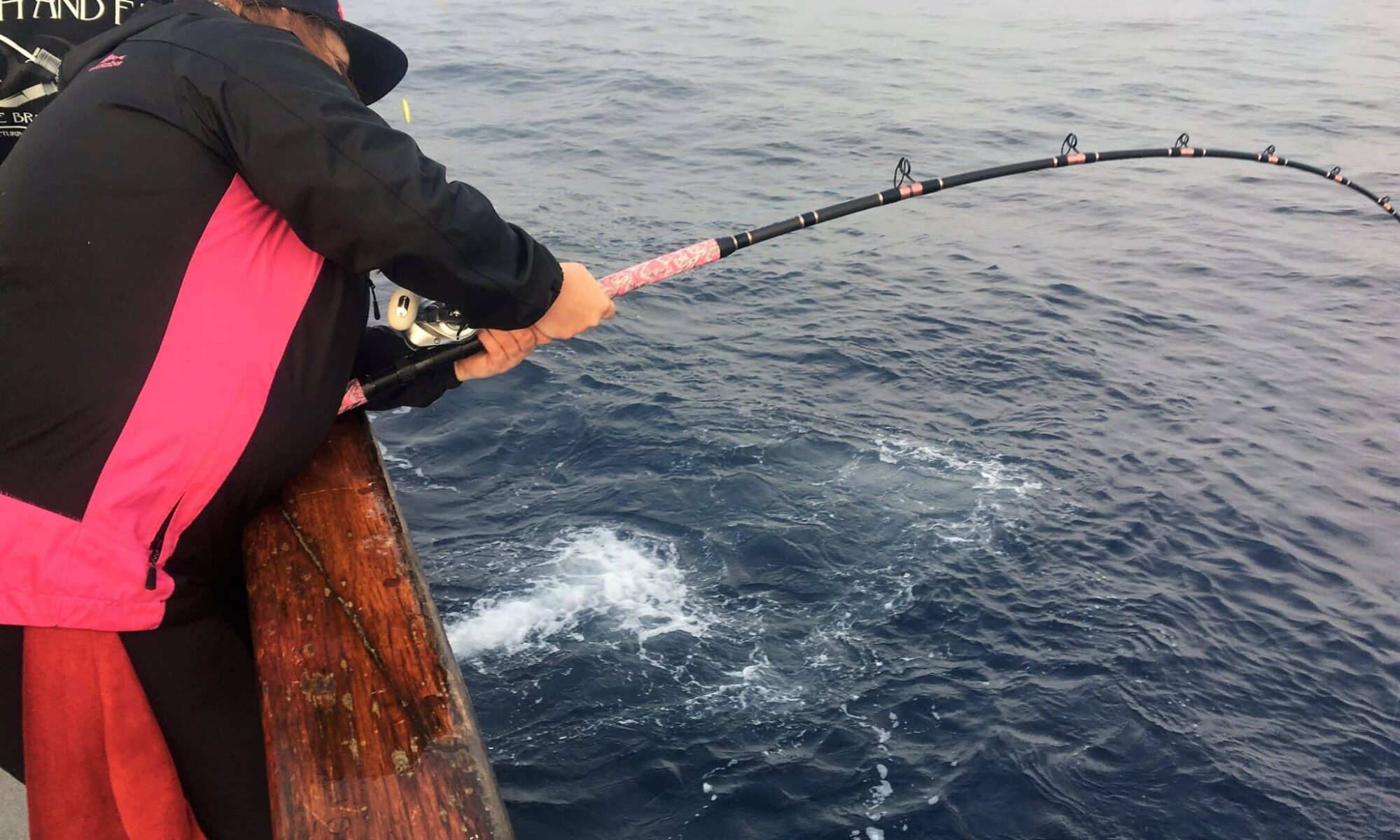 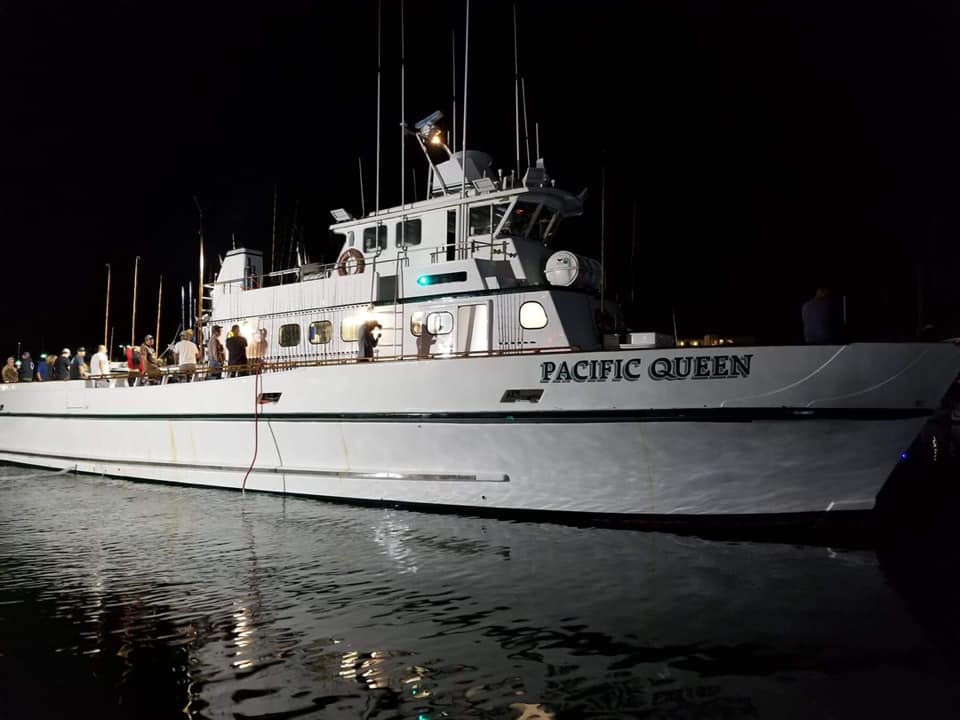 Friday night I boarded the Pacific Queen out of Fisherman’s Landing in San Diego.  I was heading out on a 1.5 day trip bound for Punta Colonet…a little over a 100-miles south, just off the coast of Northern Baja Mexico.  Leading our trip was Capt. Gavin Harbour. I’ve come to really admire Gavin’s prowess when it comes to these Punta Colonet trips, so I was excited about getting out with them again.

The next morning, we got into the zone around 7:30 am and started looking around.  It was really foggy, but I saw 4 or 5 other boats in the area.  I had chatted with Capt. Adam Williams of the New Lo An after their trip the previous weekend and he had told me the water was cold and green.  Gavin said the temp had come up a bit and the water looked clean and blue…a hopeful indicator of how our day might go. 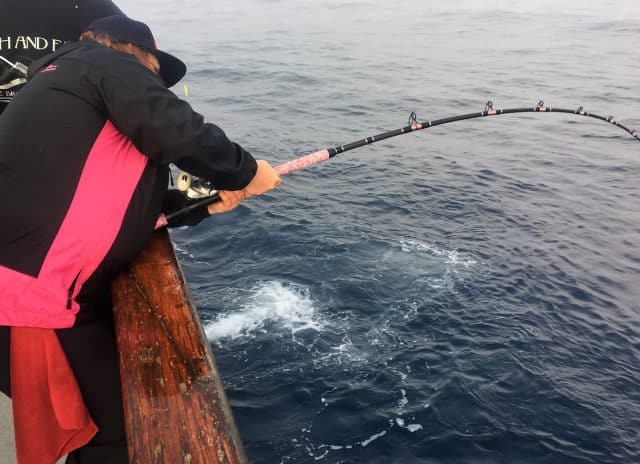 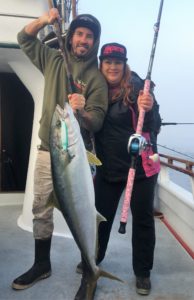 It didn’t take long for Gavin to find a school and we started our first drift of the day.  He said the depth was around 200-feet, and that he was seeing scattered fish marks towards the bottom.  Most people were fishing full size heavy yo-yo jigs.  Kelly Auburn Castaneda (above and right) was the first angler to hook up on that drift and put us on the board early with the target species (yellowtail) to start the day.  She hooked up on the mint/white full size heavy from our trip sponsor 187 Jigs.  Mixed in with the yellows were a few bonito.

We got going and quickly found another school.  Same result.  One more yellowtail hit the deck. 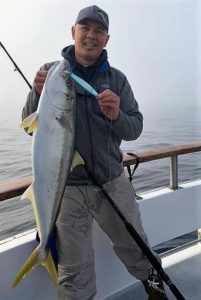 I had started the day fishing a green mackerel colored 187 Jig, but decided to cut it off and and switch up to the same mint/white jig that Kelly had put to good use.  It was a good call, and I broke the ice on my trip on our third drift of the day.

At that point, the sun was starting to burn off the fog.  I don’t know if it made a difference, but it started getting good and we were putting more fish on with each drift.  By 10 am, we had a total of 60 fish for the boat!

After that high point of the morning, Gavin said we had hit the same school a few times now and they stopped responding to our efforts.  He wanted to give them a break and see if we could resume work on them later in the day.  We switched over to rockfishing. 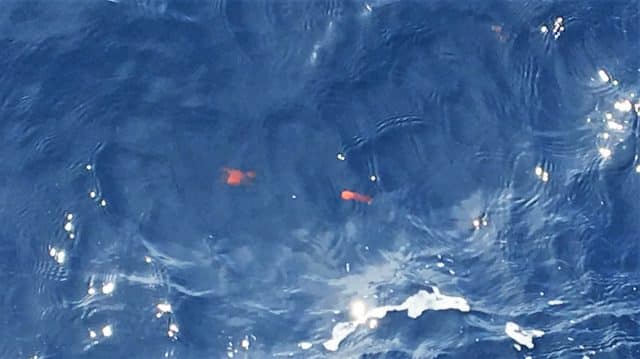 It was a slow go to start.  We fished deep, 400-feet plus, so the crew was recommending a minimum of a 12-ounce sinker.  Sixteen was preferred.  There was a lot of red crab in the water.  Even though there were fish there, they didn’t want the cut squid we were using for bait. 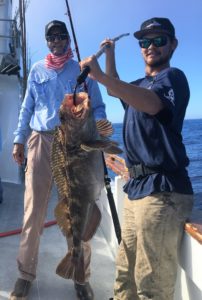 Gavin made a move to the other side of the bank.  I immediately noticed the lack of crab and the fishing was much better.  Nice grade vermilion rockfish were the primary catch with some starrys, bocaccio, and whitefish mixed in.  The only disappointing thing was the lack of lingcod.  I want to say that only 2 legals were caught.  Bob “Dart” Fletcher was one of the lucky anglers to score one (right).

We filled sacks for a couple hours rockfishing before we turned our attention back to yellowtail.

The bonito were much thicker in the afternoon and it was a challenge to get past them to reach the yellows.  Again, you were doing yourself a big favor fishing the full size jig.  It was pretty hit and miss, but we had one big stop for 25.  We finished the trip with 90 yellows and 150 mixed rockfish for the 24 anglers on the boat.  Definitely the mint/white was the best color jig for our trip.  Various red crab patterns also produced well.

Thanks so much to Capt. Gavin and the excellent crew of the Pacific Queen for a great trip.  They’ll be doing these trips every Friday through at least February.  It’s a fun trip and one of the best options available to us this time of year.  Passports are required so be advised. 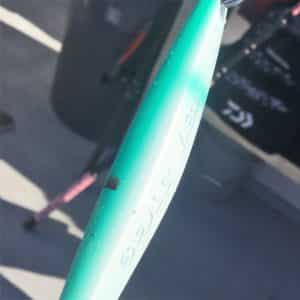 Thanks also to 187 Jigs for sponsoring the trip.  There were at least 14 yellows caught on that mint/white jig (that I know of) and I’d highly recommend grabbing a couple for your trip.