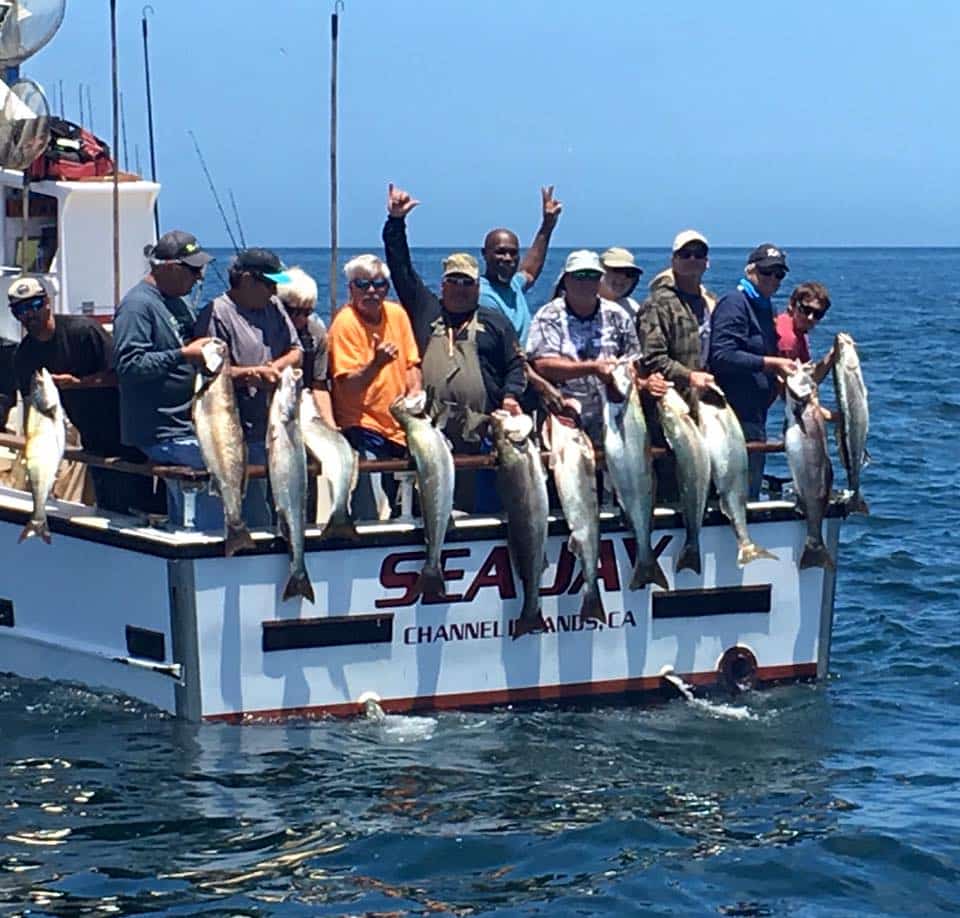 Lately, all the talk has been about the bluefin, but white seabass, aka “ghosts,” are still very much in the mix.  The next several days (including this Father’s Day weekend) are primetime to chase them due to the current moon phase.

Great timing by the way; the limit just went up to 3!

Of all the fish we catch, the white seabass may be the most elusive one out there.  Sure, bluefin tuna are notoriously finicky biters, but seabass are definitely their own form of frustrating.  I know a lot of really salty anglers, and if they have one fish that still eludes them, chances are it’s this one.

I caught my first one by accident.

It was 2011, and I was fishing the afternoon halfie on the New Del Mar out of Marina Del Rey.  Barracuda was the target fish of the day (remember when they used to come to Santa Monica Bay?).  I had spent the morning volunteering with MDR Anglers for their Kids’ Day At the Dock.  When the event was done, many of us made our way down to ride the boat.  Several kids did as well.  My own two kids, Jacob and Juliana, met me there when their mom dropped them off.

Since there were a lot of kids and non-angling parents onboard, the method of choice for the cuda was flylining a bait.  I tried to throw a jig, but each cast would return a macrame of snagged lines.  I figured I’d drop down a leadhead to the bottom and see if I could find a sandbass.  I found a seabass instead.

Seabass seem to be forgiving of the unsuspecting angler…less so to those of us intending to actually catch them.  I tried 7 more times before I got my next fish.

Two years ago, I caught a relative bounty of seabass with a tally of 6 for the year.  At that point in the developing El Nino, the warm water hadn’t really reached as far north as the Channel Islands.  I caught all of my fish up there over the course of 2 awesome trips, once each on the Pacific Islander and the Ranger 85.  The Ranger 85 trip produced my current personal best with a fish that was estimated at close to 50-pounds.

Moon Phase and the Seabass Bite

I’m bullish about the opportunity for this weekend and beyond. Sunday marks the evening of the full moon.  A few days before and after the full moon are typically the golden window for the ghosts to bite.

I had the opportunity to chat with Capt. Greg Obymako of the Pacific Quest this week.  Oby has had a hot hand on these fish for several weeks now.  I asked Greg if he thought moon phase affected them biting…

On the full moon though…squid are spawning out on the moon, so there’s more dead squids for fish to eat.”

So there you have it.  The overnight boats fishing Catalina like Greg’s Pacific Quest are a good bet.  The Commander and
Eldorado have trips leaving tonight.  I like the day boats up north out of CISCO’s (Aloha Spirit, Sea Jay, Island Tak) and the Island Spirit, Amigo, and Pacific Dawn out of Ventura as well.  There’s also a great trip leaving Wednesday night out of 22nd Landing aboard the Fortune that I think will offer a great shot.

Lots of opportunities to land one of these great fish and boats waiting to put you on them.  Get out and get one…or three!  If you need a refresher on rigging up, check out my previous article here on BD.  Good luck if you get out there.