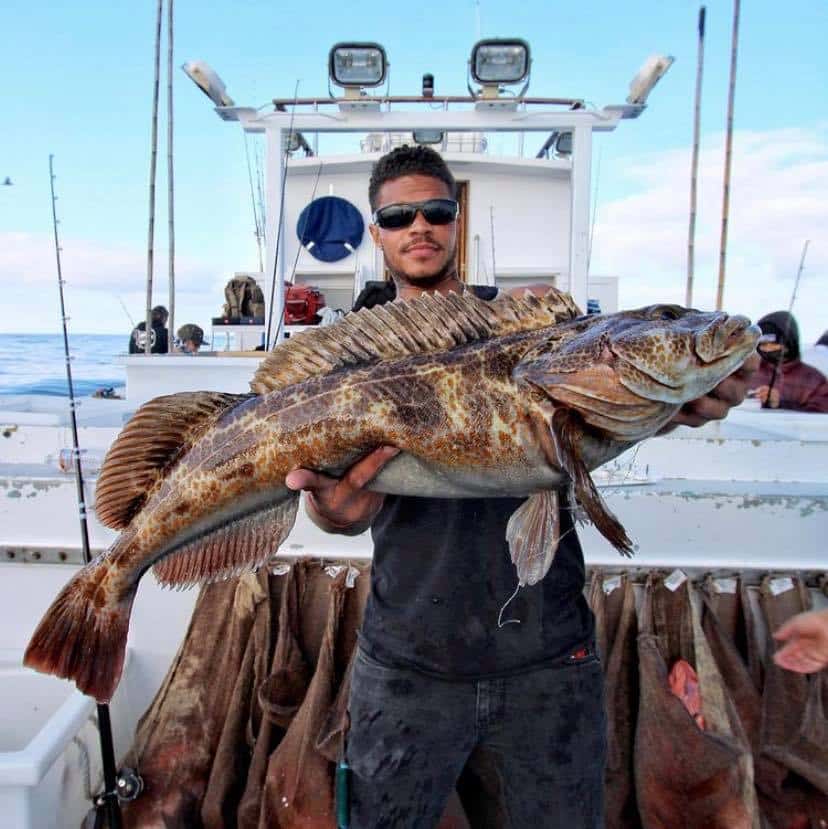 We’ve definitely moved on from the Fall fishing season.

There are still boats fishing 1.5 day or longer targeting bluefin.  The counts are up and down, but there’s still good fishing to be had. 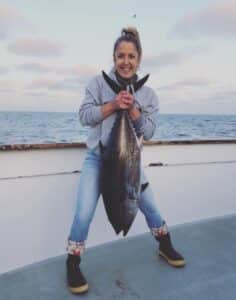 The Pacific Queen just returned from a 3-day trip yesterday (Monday, November 30th).  They had daily limits for 25 passengers over the course of all 3 days of the trip (150 fish).  The picture (right) is from a previous trip, but it’s representative of the grade of fish being caught…that schoolie variety of 25-40-pounds.  You could probably get away with bringing just a 40# flyline setup (and a range of fluorocarbon leader), but I’d still bring maybe a 60# setup for a rubber band rig, and as heavy as you’ve got for a flatfall rig.  Two more rods…better to have them and not need them, than leave them at home and wish you had them.

The overnight and full-day scene doing “normal” offshore fishing has dried up.  The full-day San Diego boats have ended their offshore season.  The Liberty is taking a break before starting boat work.  The San Diego is back to fishing the Coronado Islands.  They just made the switch, so they still seem to be finding their way, but it wouldn’t be a terrible thing if you ended up catching a lingcod or a structure bass at the islands if the yellows don’t want to go.

Speaking of lingcod and structure bass…

If the opportunity presents itself, I’ll definitely get on one more tuna trip…but it’s not a priority for me.  To be honest, I’d rather go on an island trip right now.  You can count on going rockfishing, and may get a shot at yellows.  It’s been a while since the boats have been harassing the bottom critters, and there are some big ‘uns getting found.  My buddy, Damien Parker Barranco, put on a charter last week before Thanksgiving on the Freedom.  The water has cooled down and they were able to make live squid.  Whenever you have the candy bait, good things happen.  They put in their time drifting for lings and pried this massive lingasaurus from his perch deep amongst the rocks off San Nicolas Island.

The local boats are getting in their bottom fishing as well. 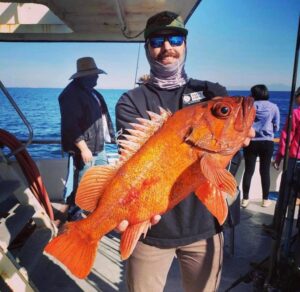 Capt. Mitch Christensen on the City of Long Beach found this huge 8-1/2-pound red (left) on Friday (November 27) in just 22 fathoms of water.  That’s an amazing quality of rockfish at that depth, especially on just a half-day trip.

Structure bass fishing is more of a January/February thing, but it’s fun.

If you want to get in on it early and are willing to brave the cold, there are weekend twilight trips doing it.  My buddy Marcus Fain went out on one recently on the Redondo Special and got in a limit of bass.  As a bonus kicker fish, he managed to bring a monster (he estimated 200-pounds!) black seabass to leader before they released it. 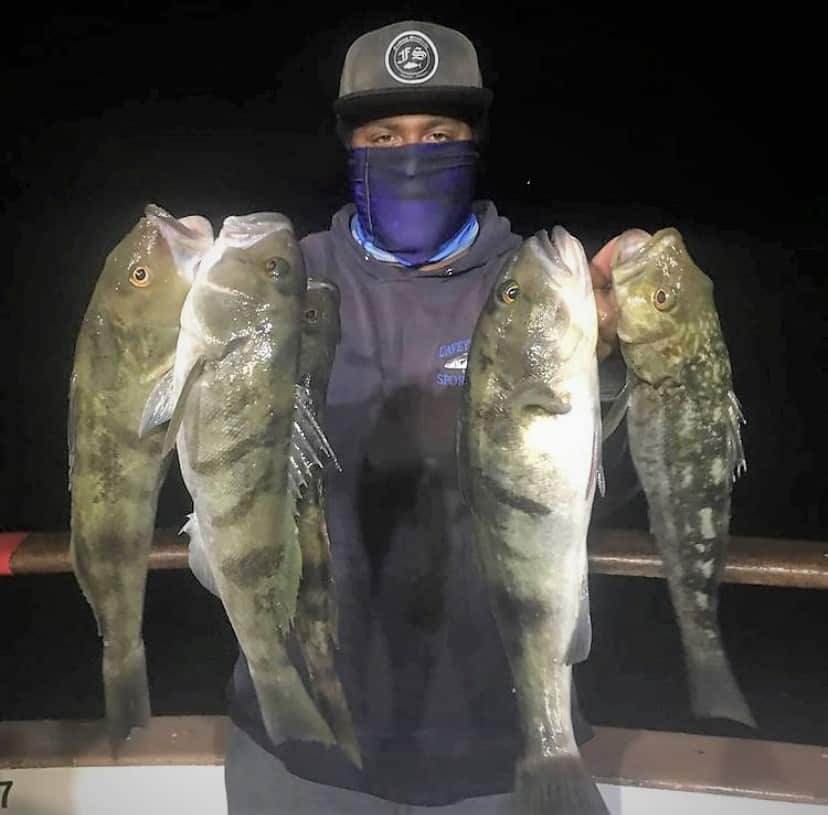 I was really busy this week and only got out briefly Sunday morning.  Went out to the Bumhole, and put in a couple of hours by myself.  It was cold…about 37-degrees and I took a skunk.  I guess that’s why none of the locals bothered to come out.  It appears like this run is all but done.  I got a tip on a spot near a hatchery upstream.  Ken fished it the weekend before and caught a couple of fish.  I went up there though and didn’t see it myself.  It looks like it’s over. 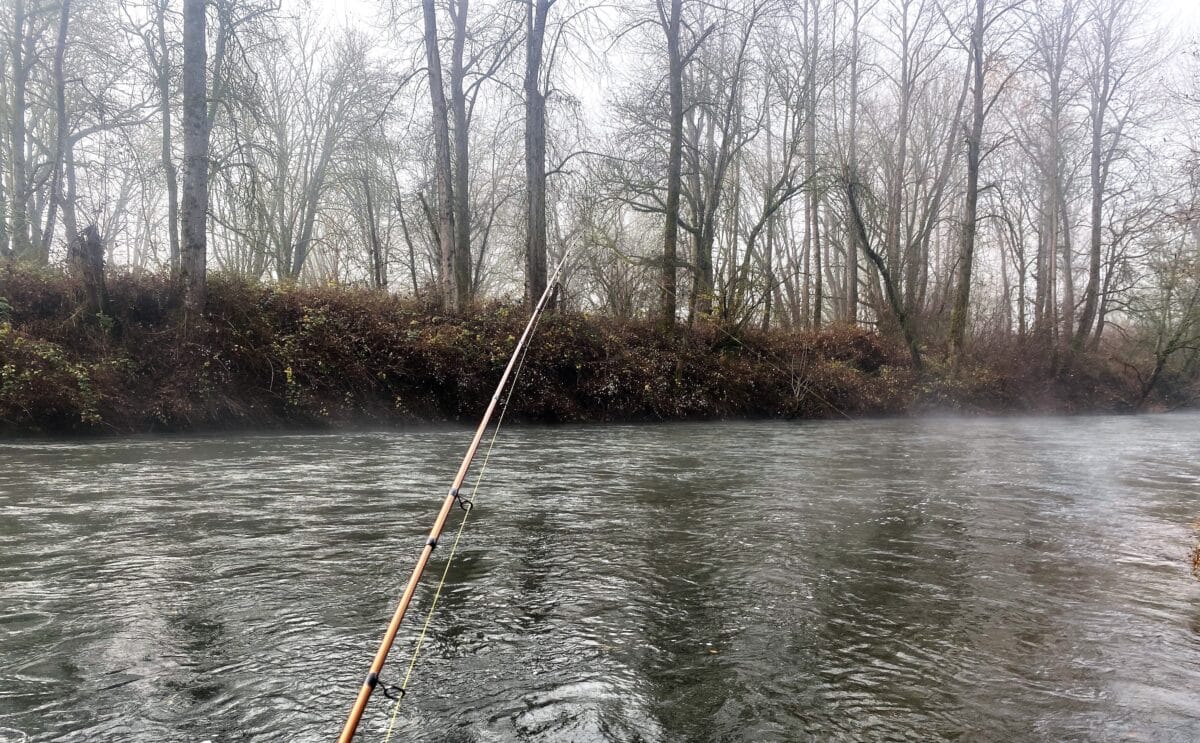 So it looks like I’ll be coming up short on this final quest.  Oh well.  Gives me a good reason to come back next year.

I’m almost done up here and plan to come down soon to scout out a new place to live back in SoCal.  Naturally, I’ll look for fishing opportunities along the way and keep you all posted on what I find.