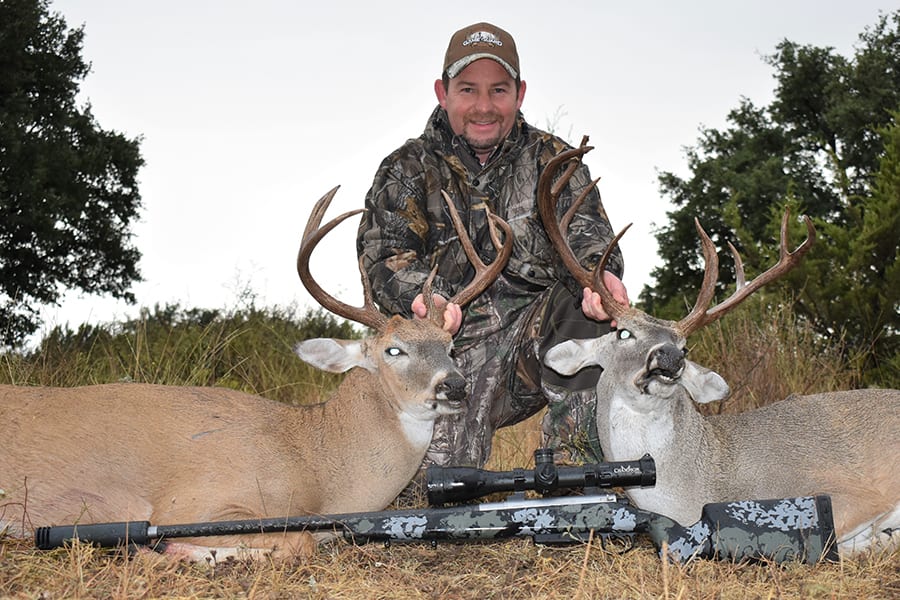 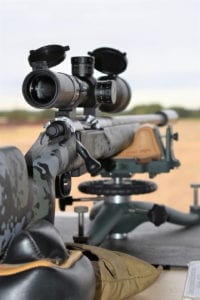 Peering into the scope, the buck’s large silhouette is easily recognizable from the does under the dim fog of early morning. With the turret set to two, all that’s left is to wait for daybreak to verify if the deer is indeed the short tined ten-point we’ve been after. Management bucks as in the case of this corn hog, are typically mature breeding age deer with genetically inferior antlers that ranch managers don’t want passing down their genetics through the deer herd, instead offering budget hunts for bucks not deemed trophies. Clearly the boss of this feeder, it stands firmly under its center posturing against any others that venture too close. “You ready?” whispers my guide Geoff lowering his binocular. “Yep,” I reply, slowly sliding my finger around the trigger. Woomph the muffled report from the silencer slumps the one-hundred-sixty-pound deer in a heap. 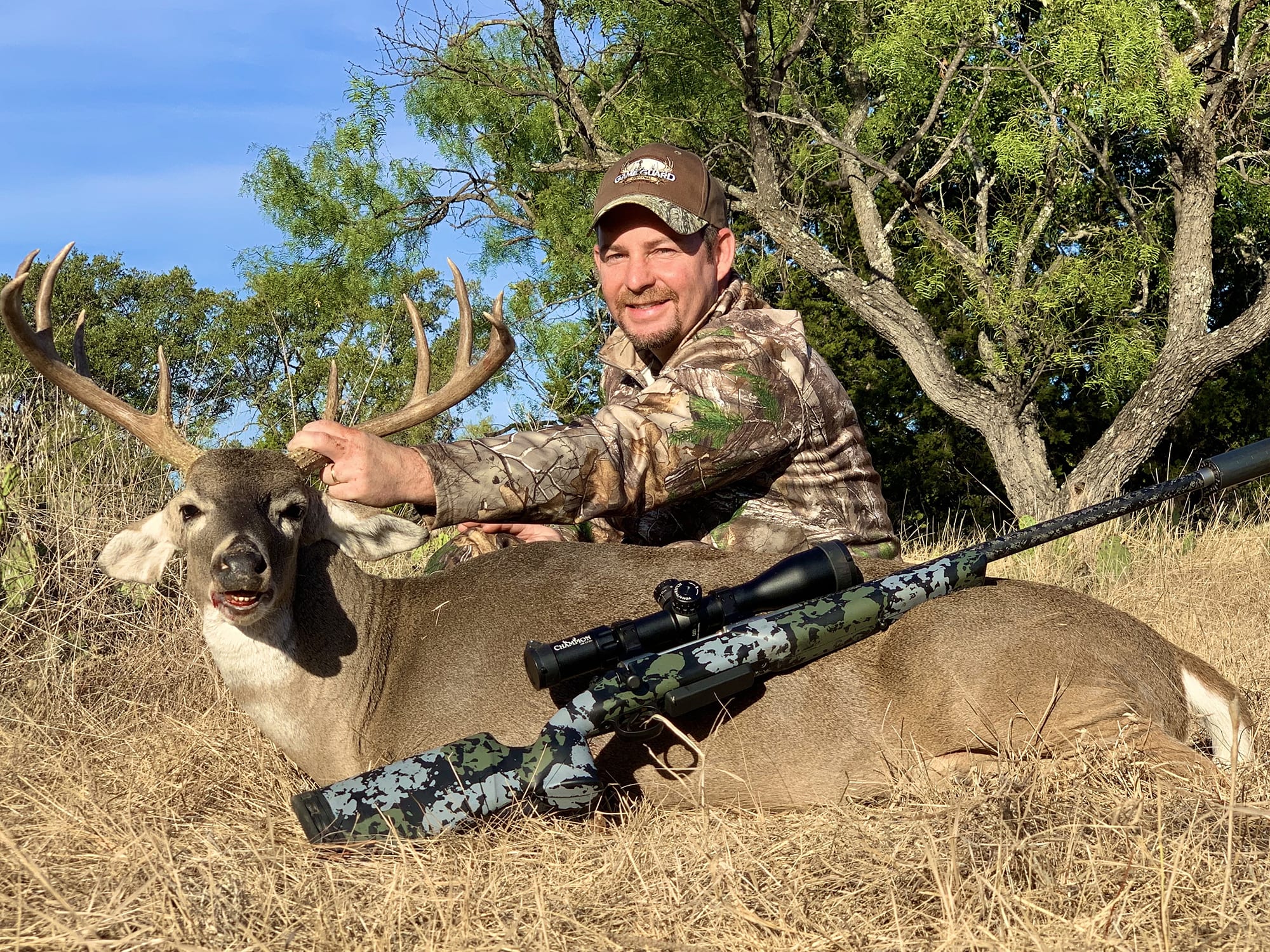 “Congratulations!” whispers Geoff, as I pull back from the scope to see the bright white belly of the buck facing our stand. It’s the third one that’s dropped in its tracks from almost 200 yards. Have I become this great of a shot? Unlikely. Like my friend’s reply to the photo I texted to him of myself with the deer -“It must be the gun.” 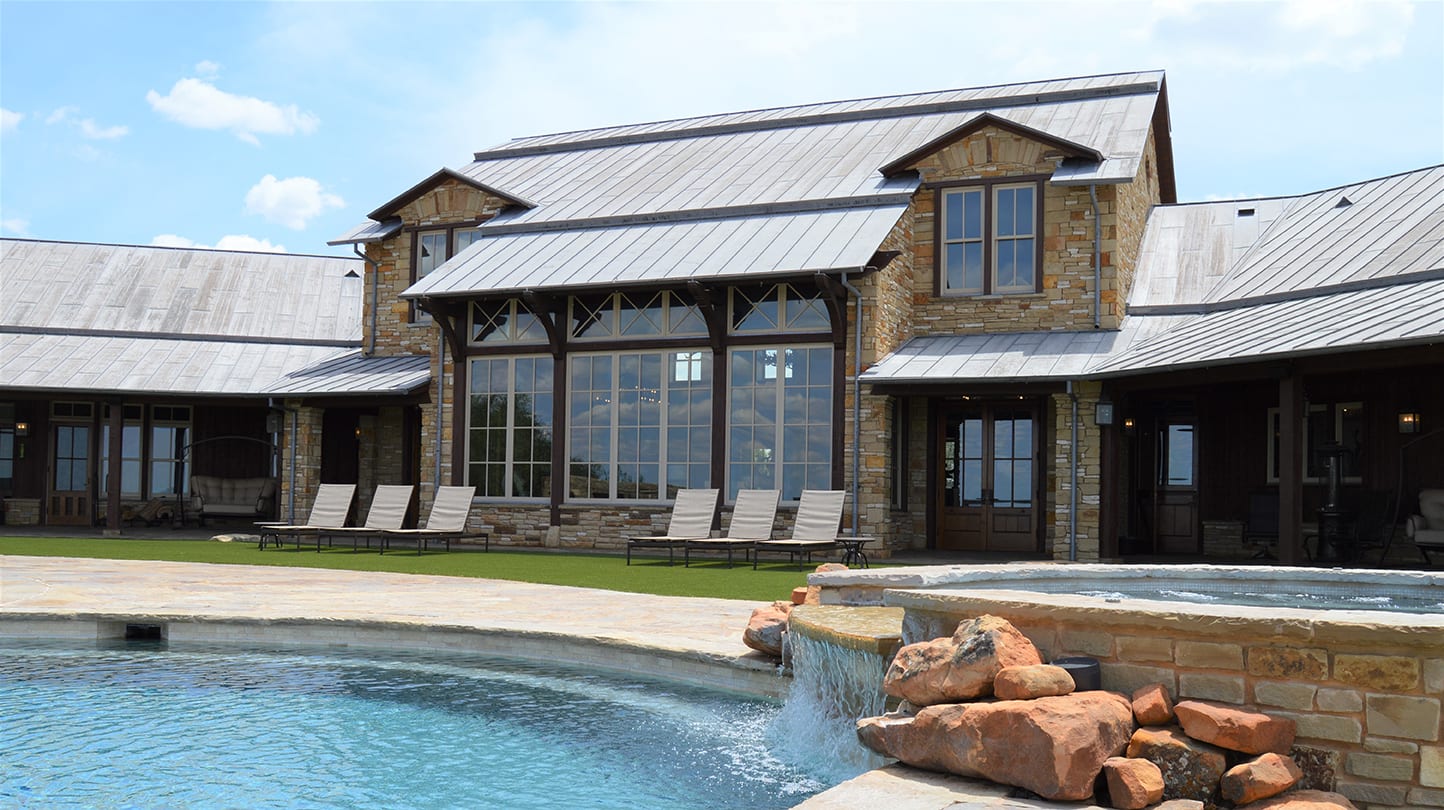 I’m at the Champion Ranch in Brady Texas, an 8,000 acre hunting ranch located in the geographical center of the state of Texas where guests can pursue a variety of exotic and native game ranging from whitetail to wildebeest while enjoying first-class amenities that include fine dining, rock waterfall pool, and onsite long-range shooting and reloading school. 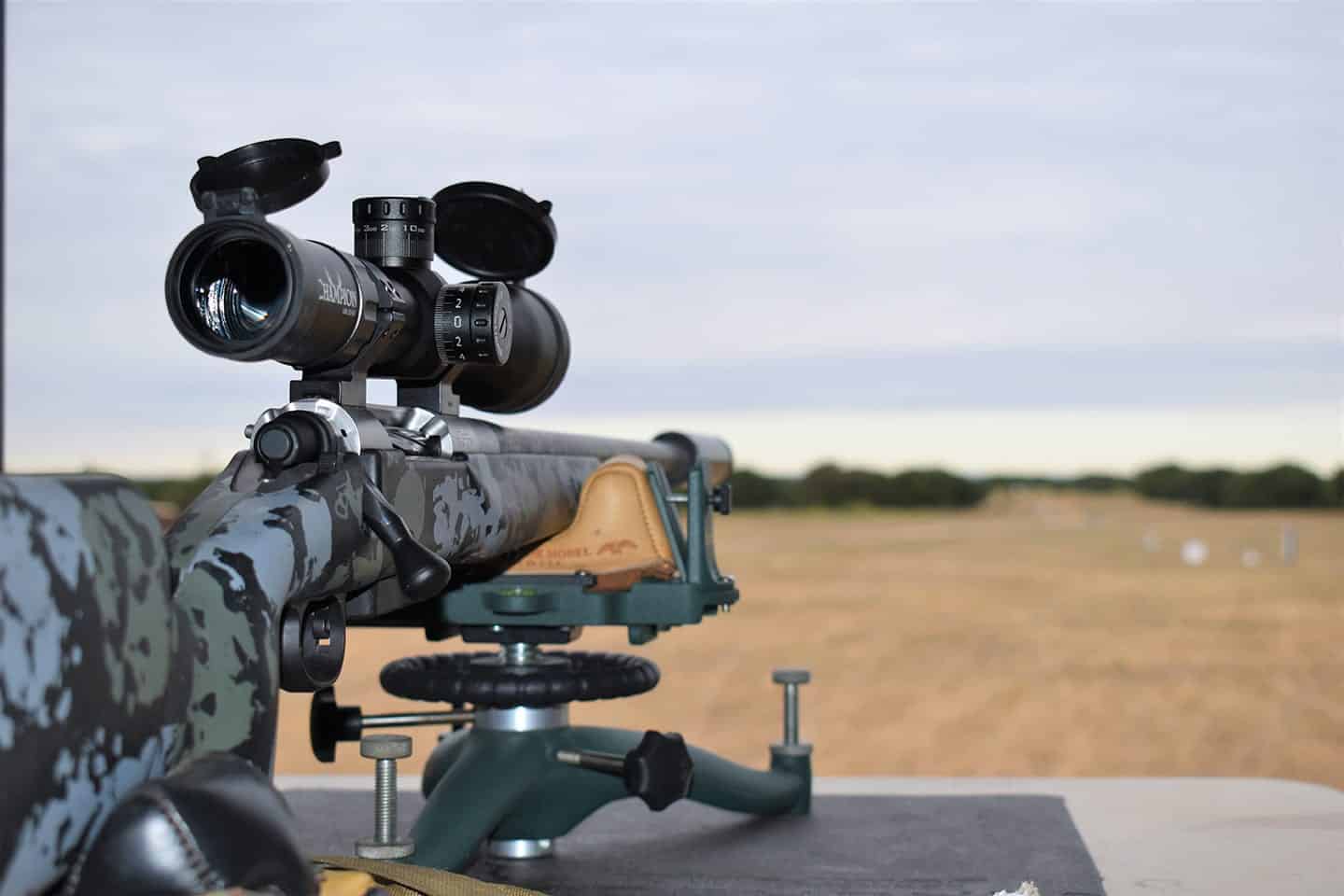 At the invitation of owner Joel Swan, my job for the weekend was to field-test his sister company Champion Arms’ latest creation – the Champion Arms Gen2 hunting rifle. Chambered in .28 Nosler the first thing I noticed about the gun was its smooth Iota Kremlin composite stock coated in a KUIU esque olive camo pattern. Topped with a US Optics 2.5 – 20 X 50 scope that’s manufactured exclusively for Champion Arms, the gun’s hardware is comprised of a Stiller Precision Firearms action, H-S drop magazine, adjustable 8 ounces to a pound and a half Timney Calvin Elite trigger and a 24” Proof Sendero Light carbon fiber barrel that sent 195 grain Berger EOL reloads out to a 1000-yard targets with deadly accuracy from a less than great shooter like myself. For hunting, Berger’s stats show the bullet moving at 3050 fps for up to 200 yards with 2″ to 5″ of penetration before rapid expansion which explained why all of the Texas whitetails I shot were immediately dead after impact. Not to mention the optional .30 Cal Omega 300 silencer from SilencerCo attached to the model I was using made earplugs a forgotten inconvenience of shooting large hunting calibers. 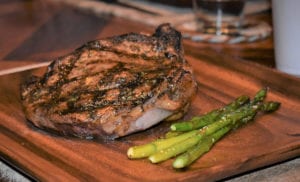 “We built this gun out of necessity for our clients,” explained Swan between bites of a delicious ribeye steak prepared by the ranch’s Executive Chef Aaron Chavez. “I’m a huge fan of long-range shooting and have had custom rifles built for me personally, but after many discussions with our clients, I realized we share a lot of the same problems with having custom guns built ranging from performance to delays, so Champion Arms was basically created out of a necessity to provide clients with top-end hunting rifles that could perform to the level we all expect.”

The following morning, Geoff and I struck out before sun up to one of the dozens of deer stand locations throughout the property known as Cool Breeze. Most of the large box blinds on the ranch are identical, each anchored into hard hill country rock with railed stairs leading up to the door platform. Once inside twin swivel chairs made for a comfortable sit during long periods waiting for deer movement. After daybreak, we glassed several trophy bucks that began filtering down from the cedar breaks to the oak hammock where the feeder was located. One being a magnificent ten-point with tall G2’s well north of 150-inches yet barely 3 and a half years old. A stunning example of the ranch’s strict management practices. As we waited and watched over the next hour or so, several more bucks began to congregate near the feeder. Before long Geoff spotted an old gnarly horned eight that Joel had shown us trailcam photos of. “That big eight Joel saw is coming in from the left,” he hissed. “I don’t see him,” I replied. “Just wait, he’s standing behind the mesquite watching.” The old buck that we would later age at six and a half years of age was much warier than the younger bucks that hadn’t made their way onto the ranch’s hit-list as of yet. Yet after several minutes it cautiously stepped into the open. While its antlers were small in comparison to the trophy deer, its body dwarfed everything else displaying a deep brisket with short thick legs and dense muscling around its neck. “Safety’s off,” I whispered, letting Geoff know that I was ready. “Bout 180 yards,” he replied. Again only the muffled report and slight recoil was the reaction to squeezing the trigger that left another buck dead in its tracks. 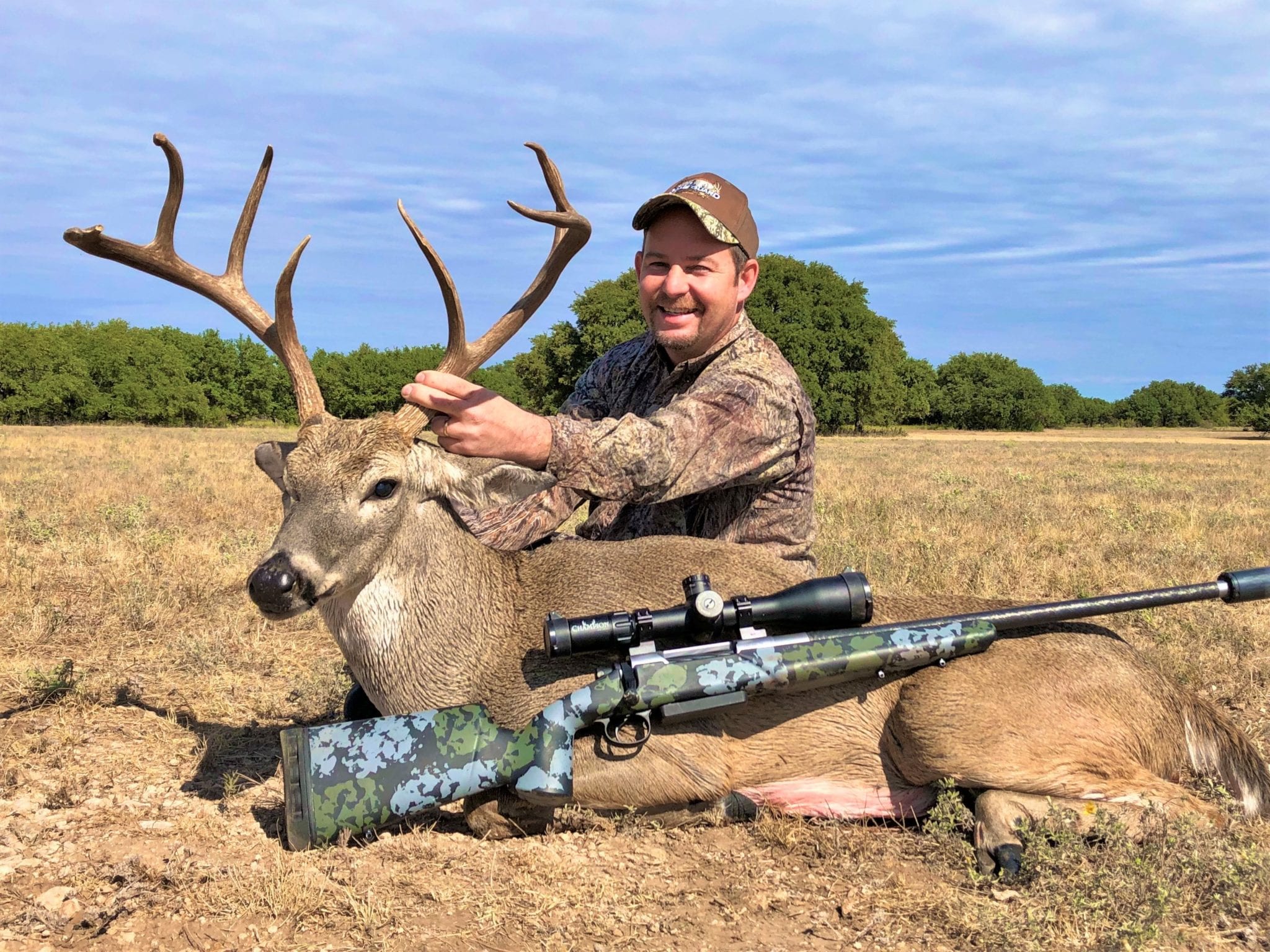 After a week of hunting with the Gen2 I must say the rifle was all that a North American big game hunter needs. Dialing the scope’s turret to the correct yardage then taking shots that stayed consistently zeroed in for as far as my binoculars could determine a buck from a doe made the experience quite pleasurable. Retailing for around $7250.00 the price comes at a premium, but for a whitetail hunter, it’s a high-quality custom rifle that’s simply a must-have.

By trips end, I’d taken four beautiful Texas hill country bucks, stayed in a five-star hunting resort, and hunted with one of the most accurate yet effective weapons I’ve held to date. The venison will soon be processed and shipped to my home in Florida where breakfast sausage and cubed steaks will remind me of the incredible experience of hunting the Champion Ranch.

For more information on Champion Ranch and Champion Arms visit their websites.