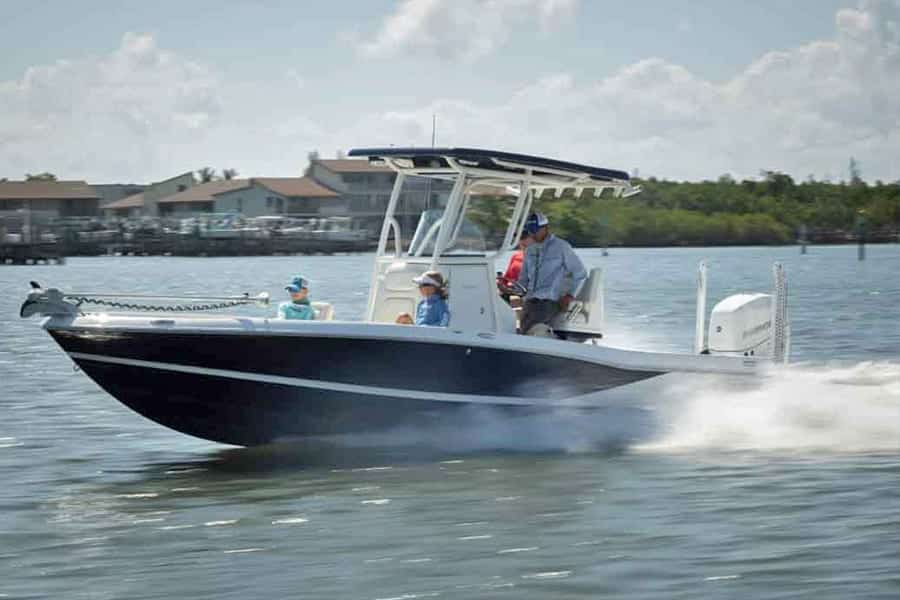 Earl Bentz is back in action with his newest creation, Camas Boats.

At the National Marine Manufacturer’s Association (NMMA) industry breakfast during the International Boatbuilder’s Exhibition and Conference (IBEX) this fall, the NMMA announced that Earl Bentz was a Hall of Fame Award recipient.

This came as a shock to no one. Bentz won nine national titles and two world championships during his racing career with Mercury Marine, managed Hydra-Sports Boats in the 1980s, then founded Stratos Boats and after that Triton Boats. A giant in the boatbuilding industry? Heck yes. But after 50-plus years in the world of fishing boats, Bentz retired.

About a year ago Bentz announced that he wasn’t quite finished building boats yet. His new venture: Caymas Boats, a line including a 21’ bass boat, and 26’ and 28’ bay boats. There’s no doubt we’ll be hearing more and more about Caymas as time goes on, so let’s take a quick peek at the 26 HB.

The Caymas is built with a patented Michael Peters Yacht Design hull, the Stepped Vee Ventilated Tunnel (SVVT). The SVVT has twin steps with a vertical sidewall tunnel and a centered aft tunnel. Like most effectively-designed stepped hulls, the wetted surface is reduced to cut drag, gaining an efficiency boost. In this case, Caymas claims a 15-percent increase in speed. Meanwhile, the sidewall tunnel is meant to increase lateral resistance, thereby improving handling and directional stability. The aft tunnel boosts stability and reduces roll and pitch. Interesting side-note: SVVT is the same design chosen by Viking Yachts for their new Valhalla line of center consoles, a development so impressive we called it out as one of the top three announcements at the Miami Boat Show last winter.

Since Bentz was one of the first builders to offer a no-wood boat back when he was at Triton, it’s no surprise that the Caymas is also 100-percent composite. The transom is cored with Tri-Core, the boat’s backbone is a foam-filled stringer grid, aluminum backing plates are laminated into the glass for heavy attachment points (like seat bases, cleats, and T-top supports), and the package gets backed with a limited lifetime warranty to the original owner, a 10-year transferrable structural warranty, and three-year coverage that’s more or less stem-to-stern.

As one might expect from a Bentz-boat, the Caymas is riddled with fishing features. There are rodracks under the gunwales and locking rod/stowage lockers under the bow seats, four flush gunwale holders (and an option for two more), four rocket launchers on the back of the leaning post plus seven on the hardtop, and four more vertical holders integrated into either side of the console. A 35-gallon transom livewell comes standard, and a second identical compartment can be plumbed as an option. If there’s anyone thing someone might argue is on the thin side it might be fish-stowage capacity, as there’s a single 40-gallon macerated box under the center section of the U-shaped forward seating. Truth be told the light tackle anglers this boat is aimed at pleasing usually don’t need anything more to ice down their slot-reds or a mess of specks or stripers. But if an angler sees the right weather-window and points the bow for offshore destinations ISO tunas and the like, carrying a fish bag will be in order. And if you plug the box, you can always pull your food and drinks out of the (optional) 65-quart slide-out Yeti under the leaning post, toss them into the integrated 31-quart cooler under the forward console seat, and get that Yeti all slimy.

What about performance, and on-the-water mojo? We haven’t had the opportunity to pull a Caymas off the dock just yet and none of the engine manufacturer performance reports have been released as of the time of publication. Internet scuttlebutt pegs top-end with a 400-horse outboard (the max power) in the upper-mid 50s and cruise in the upper-mid 30s, but we’d stress that these figures are no more than rumor and ask you stay tuned – as soon as we get the opportunity to run figures of our own we’ll post an update, as well as an assessment of how the Caymas handles the waves.

In the meantime, as you hit the fall and winter boat shows, keep your eyes peeled for the Caymas 26 HB. With 50-plus years of fishboat-building experience at the helm, we’re thinking that this is one bay boat you won’t want to miss – and we’re pretty dang sure Earl himself would agree.