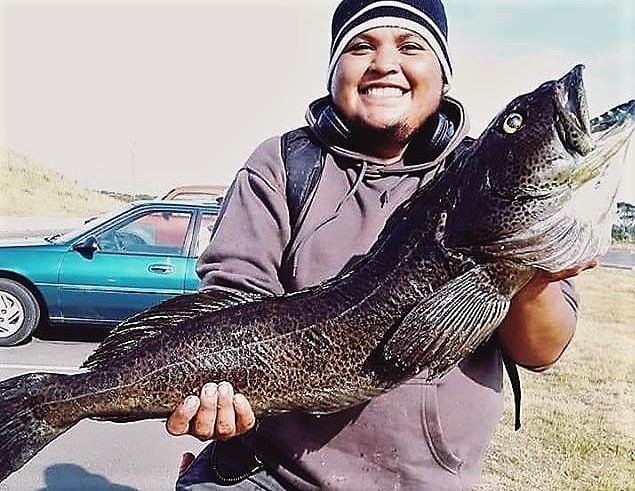 While we were there, we met up with my cousin, Henry Samonte, and his two daughters, Tamsyn and Ella.  My father Jose, used to gather up my extended family (cousins, aunts/uncles, grandparents) for epic clamming and fishing expeditions to the San Juan Islands when we were little.  I was able to find a picture of one of those trips (right).  That’s me in the center with my dad (seated on the ground) and little brother Rob to the right.  Those are two of my cousins, Tony and Winston to the left.

In a spur of the moment homage to my dad, Henry and I planned a fishing and clamming trip out to Whidbey Island with our children.

You can read the details of that trip HERE, but to make a long story short… 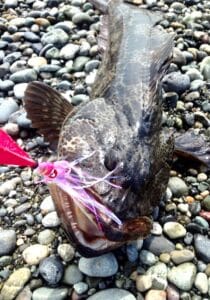 On that trip, I caught my first ever shore lingcod (left).  My son Jacob caught a pink salmon off the jetty.  All the more remarkable was that both of these amazing catches happened in the span of about 15 minutes when we first arrived in the spot!  We were targeting salmon at the time (nice work Jake!).  Pink salmon (aka humpies) run in odd-numbered years.  They’ll bite at anything pink.  You can see I caught the ling on a pink Buzz Bomb lure that I rigged up.  Even though the ling was an accidental catch, I knew it was a really good one.  I just didn’t realize how good.

Seven years later, I’ve come to realize it was a unicorn of a catch.

Since I’m back up here in Washington State right now, I’ve set out to see if I can catch a unicorn again.

The following is what has transpired so far in that quest…

In Part I of my West Coast Fishing Odyssey, I talked about how I smashed the black rockfish at the jetty off Humboldt Bay, by Eureka, CA.  I had found some videos on YouTube about fishing off the jetty in Westport, WA.  In the videos, the environment looked similar to what I found in Eureka, so I wanted to give it a go once I got up here. 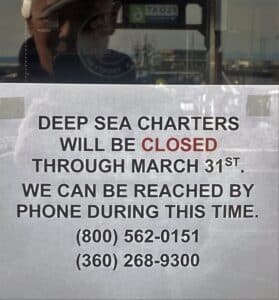 Westport is similar to the Fishermans Landing/Point Loma/H&M part of San Diego in that it is the central hub of the sportfishing boat fleet here in Washington.  I had 2 goals when I went out there.  One was to scope out the jetty and see if I could get lucky catching a ling.  The other was to check out some of the sportfishing operations and figure out when I might be able to fish with one of them.  I struck out on both.  I skunked on the fishing and all the fishing operations were shut down because of the coronavirus.

I’ll give Westport another try or two before I return to SoCal.  This week, I wanted to see if a return to the original spot where I caught that ling might lead to the same result.

Last Wednesday (March 25th), I set out to find out.  When I left my mom’s house in Des Moines, it was pouring rain.  I brought my AFTCO rain gear with me up here though, so I was undeterred.  I caught the ferry at Mukilteo and made the short ride across Puget Sound to Whidbey Island.  I got over there around 11 am.  I lucked out and it appeared I was on the good side of the rainstorm.  It was beautiful out there on the island.  I wasn’t in a big hurry to get to the spot because low tide wasn’t for another couple hours. 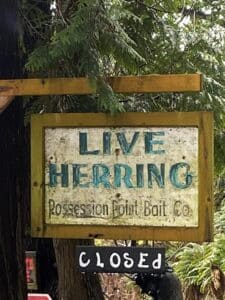 When I went to Westport the previous week, I brought 2 setups.  A heavier setup that I planned to use for a bait and wait type rig, and a lighter setup to cast around and see if I could find fish that way.  In trying to figure out where I might be able to get bait, I found a retailer on Whidbey that sells herring.  That spot was close to the ferry landing in Clinton, so I set off to find it first.

I found it, but despite Google saying otherwise, Possession Point Bait Company was closed (again, probably due to the virus).  Oh well, I guess I’d have to make it happen on plastic.  Good find though…I had no idea they had live herring.  I’ll be sure to bring a bucket next time.  Some live bait may just be the ticket.

I poked around a little at a nearby beach, but it didn’t look fishy.  I pushed on.  It was about an hour’s drive to the spot.  By the time I got there, it was just after the bottom of the tide.  I had some lunch and started rigging up. 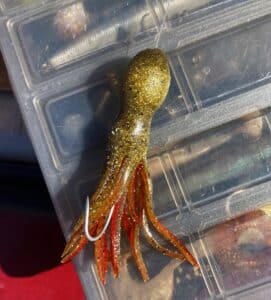 I picked up this cool little jig in the landing store in Newport, Oregon.  It weighed an ounce and looked like a baby octopus (right).  I tied it on with 25# fluoro and tied a 3″ Gulp minnow about a foot above the jig.  I tried casting from the shore, but it was too early.  The tide hadn’t risen enough.  On top of the lack of water, there was thick kelp near shore.  After I lost my first setup to it, I stopped to re-rig and try from the jetty instead.

The jetty presented its own challenge.  The rocks looked treacherous and were covered with some kind of mossy growth.  Luckily there weren’t any waves to speak of and the rocks were dry.  Even then, it was rough going.  I slowly picked my way to just past the kelp line and set up shop where there was a stable platform to cast from. 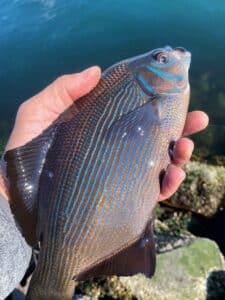 The water was clean and clear.  It was easy to see where the gravelly sand gave way to the kelp and bigger rocks of the jetty.  I tried some longer casts but didn’t find any further out structure.  At this point, I didn’t see any fish in the water.  Often they’re hiding in the rocks waiting for something to ambush, so I kept at it.

Eventually, though, I started to see packs of 3 and 4 fish swimming through.  I thought they were black rockfish, but I couldn’t get one to go to confirm.  I downsized to 15# fluoro and got one on the Gulp minnow.  I found out they were striped sea perch, aka rainbow perch (left).  After the first one, it was pretty steady on them.  It was nice to catch, and I was having fun, but it wasn’t the target fish.  I switched up again to a 5-inch swimbait and worked the edges of the kelp and rocks.  After putting in an hour plus on the swimbait, I called it a day and left to catch the ferry back.

Once I got back home, I discovered that as of midnight, a halt to all recreational fishing would go into effect until April 8th.  I was lucky to get in any fishing at all.  I guess I’ve got some time on my hands to plot the next mission.

You may be wondering what that featured picture is at the top of this post.

Well a kid going by the handle of lil_chalupa_crabber15 hit me up on Instagram.  He works on a commercial crab boat in No Cal, but he previously lived in Westport.  He’s holding his personal best 15-pound lingcod…off the South Jetty there at Westport.  I had the right idea, but I need to make some small tweaks and get lucky.  I’ll keep you posted.

Hang in there and stay safe Salties.  Good luck when we all get back out there! 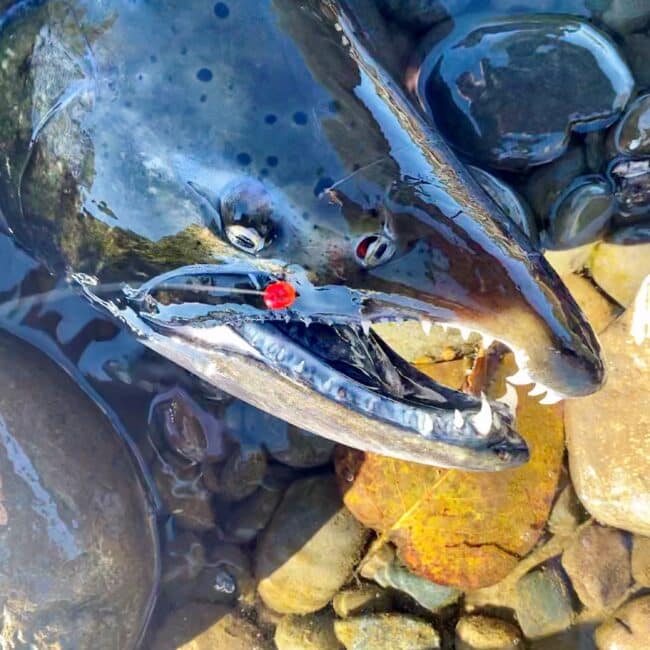 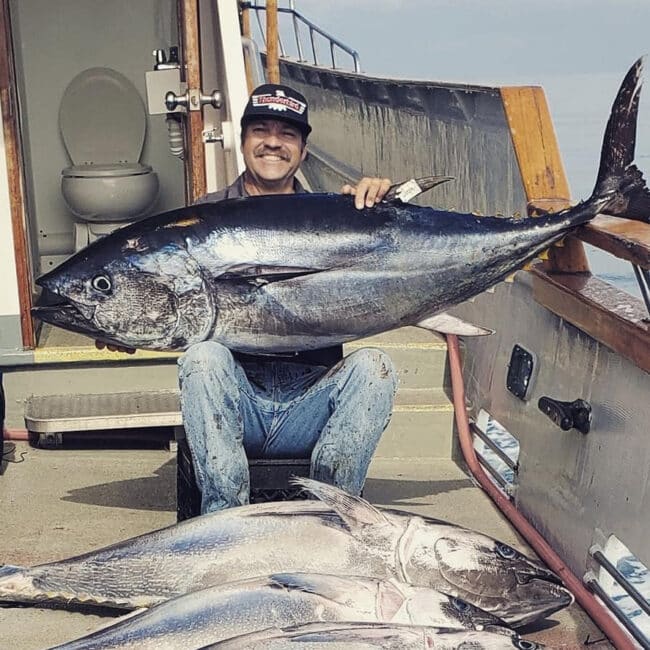