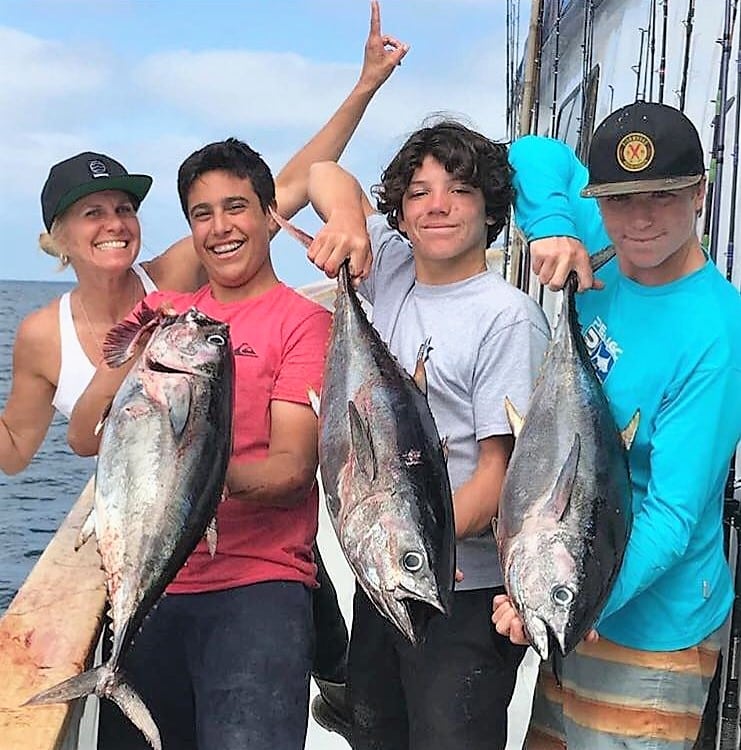 I’m hoping people got out offshore this last week because it was pretty epic.  I reported last week that there was some good sign of yellowfin.  These fish had been noticeably absent since June, then abruptly they exploded back on the scene this last week.  Mixed in were some of the catchable size bluefin, paddy yellowtail, and even a smattering of dorado.  It was a welcome change to the big bluefin or bust kind of fishing that had typified what was happening outside.  Trips from the full day range out of San Diego to multiple day trips were all getting in on it.  It was the perfect end of summer activity before back-to-school, just like these young anglers (top) enjoyed aboard the Liberty out of Fisherman’s Landing this last week.

You Said Something About The Pier?

I’m currently up visiting my mom in Washington State as she is celebrating her 80th birthday this week. Every time I visit up here, I’ve been hitting my local pier hoping to be there when the salmon started running. Well, it happened this week. Pink salmon have been the main target, but there have been a smattering of kings and silvers in the mix. Pretty exciting stuff if you are willing to go elbow-to-elbow with other anglers to try your luck at the public pier.

It got me thinking, I wonder if anything good is happening back in SoCal at the piers.

A couple weeks back, I wrote about fishing for leopard sharks off the sand. When I did that, I fished with Ben Hervey-Murray, of the guide service California Sea Fishing. Before I left for Washington, I was looking for a change of pace and tried to see if I could replicate that trip on my own. I got a little side tracked though. I went to Redondo Pier to try and make mackerel when I found they were catching bonito off the pier! Anything shiny (Krocodiles, Kastmasters etc.) will work, but the guys having the best success at it were fishing a sabiki setup with the bigger flies on them. The bonito pictured (right) was actually taken at the Oceanside Pier this week, so Redondo isn’t the only pier with bonito action right now.

Whenever I head out fishing from San Diego, I typically leave early to avoid traffic. To kill time before heading to the landing, you’ll usually find me at the Shelter Island Pier. I just throw plastic when I go. Last time I was down there a few weeks back, I caught 5 spotted bay bass and 3 short halibut throwing a dropshot fluke to match the abundant smelt typically found by the pier.

The “pro” pier guys though are bringing a dip net and making live bait. One of the pier regulars told me his personal best there was 31-inches!

Making live bait and then using it to go big is always the pro play at the pier.

Which brings us to the pier catch of the week…maybe the whole summer.

This tank yellow was caught just this last Sunday off Crystal Pier in La Jolla. I’m told it was caught on a flylined mackerel. After posting this picture to my facebook page, another angler posted a picture of a 45-pound yellow caught off Manhattan Beach!

It’s not a high percentage deal obviously, but if you missed your boat or funds are low don’t overlook heading to your local pier. You might just get lucky. Good luck if you get out there.