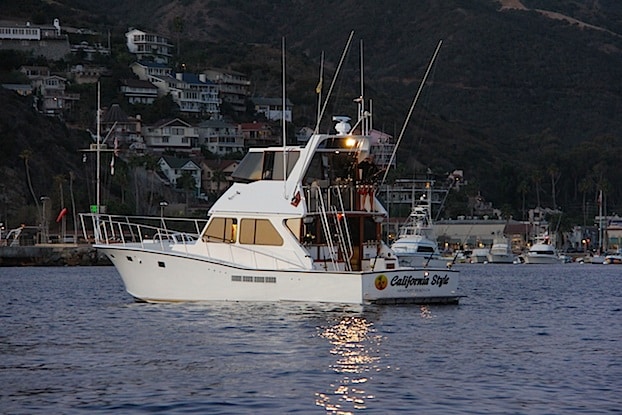 The team on California Style took the lead in the 2012 Catalina Classic with the first qualifying fish of the tournament. Christian Petersen hooked the striped marlin just after 9:30 a.m. on Day One of the Catalina Classic. The crew was fishing out by San Clemente Island when they got the fish to bite a jig.

When California Style got the fish to the boat about 30 minutes later, they were faced with the tough decision of boating the striped marlin or releasing it. To count as a qualifying striped marlin, the fish must measure at least 80 inches or weigh 145 pounds. The crew’s captain, Burl Gregory, and gaff man G.J. Sacco made sure the fish would qualify before deciding to boat it, which they did. With the fish secure, California Style kept on fishing, hoping they’d hook another one.

Several of the boats in the 27-boat fleet saw striped marlin tailing on the surface over the course of the day, but there were no other qualifiers landed. That meant California Style would take home the daily prize and move into first place for the overall standings.

The clock was well past 7 p.m. when California Style finally made it back to the Green Pier in historic Avalon Harbor to hoist their fish up onto the scale. A crowd gathered to see how much the qualifying fish would weigh. The fish weighed in at 142.5 pounds. The Catalina Classic and the Avalon Billfish Classic are the final two tournaments in the California Billfish Series presented by COSTA. The fleet is out there today hoping to land a bigger fish or tally enough striped marlin releases to take home their share of the $154,000 in cash up for grabs.

The fleet has enjoyed clear weather, and the sunny conditions make it much easier to spot tailing marlin on the surface, which will help the crews as they put their best spotters in the gyroscopic binoculars.

To keep up with all of the action, follow the live scoring on the California Billfish Series website by clicking HERE.

For more information on the California Billfish Series, visit www.CatalinaClassic.com.