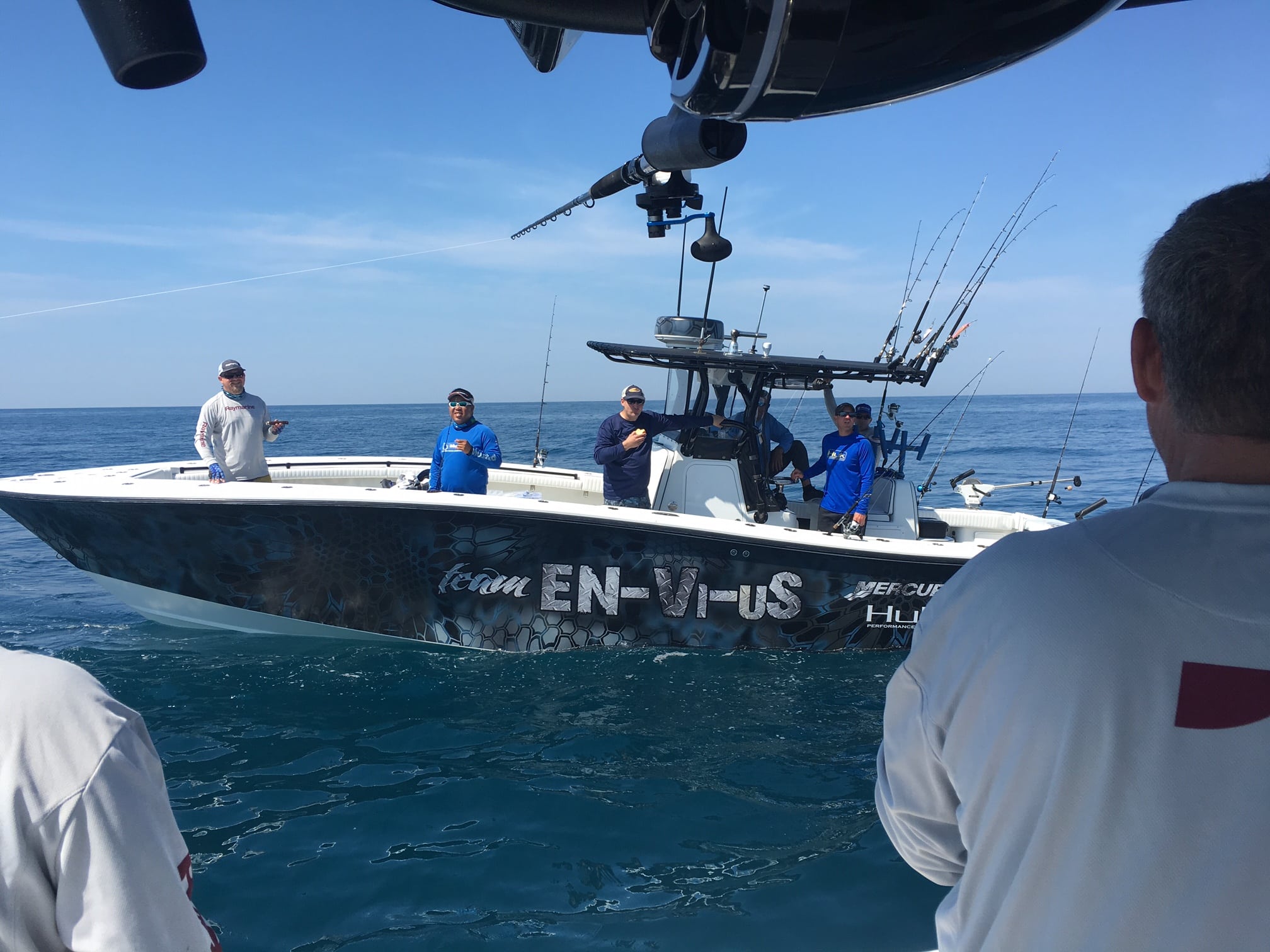 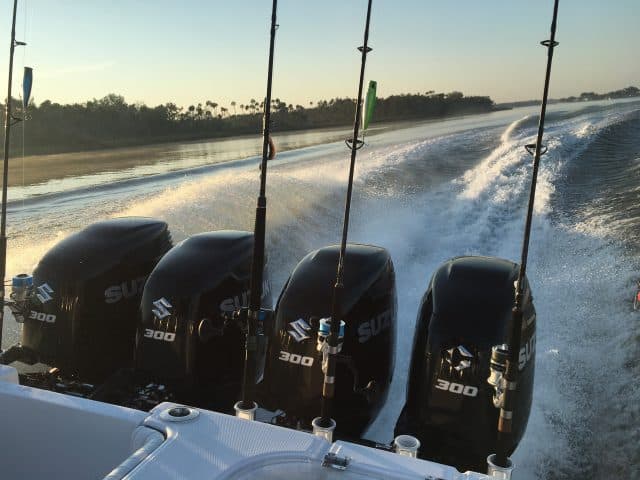 This is the third installment of a multi-part story.

Day two on Crystal River started out much like day one, dark, humid and ripe for attack by swarms of biting insects. As on the previous morning, a group of tired Cast and Blast attendees had assembled and as they milled about by the great fiberglass manatee, box lunches were again the main topic of conversation. But this morning’s tone was different, darker, rumor had it that a particular side dish had made someone sick and people were scared. When eating my sandwich the previous day I’d noticed a small container full of what appeared to be some sort of mayonnaise based mush, but was forced to forgo it due to my box lacking dining utensils.

Glad that the packaging oversight had allowed me to dodge a potential bullet; I checked my current lunch box and found another suspect container, this time accompanied by a plastic wrapped spork. Upon closer inspection the container proved to be full of potato salad, which several people in the group assured me was safe to eat as the tainted pasta salad had been the culprit. Several other people argued that they’d heard the pasta salad was fine and it was actually the potato salad that was bad. After polling a few more people it was clear that most were were split into two distinct camps, both of them claiming their preferred side salad was delicious and the other potentially poisonous. Despite their strong opinions on the subject, it soon became clear that no one actually knew who had gotten sick and since all of the previous day’s attendees were again present and without gastric complaint, the whole thing was likely just a rumor someone had started to divide and unnerve us. Suspecting it might be the work of one of the Birkenstock wearing, manatee loving, anti-fishing, enviro-tourists I’d previously encountered in the bar, I erred on the side of caution and tossed the little container and its associated spork in the trash.

When the day’s boat assignments were handed down I was told that I’d need to get a ride over to the marina as I was going to be boarding a boat that was too large to make its way through the small canal by the hotel. Hitching a ride with Cuda Brand’s Mike Donigian and Rick Constantine, my table mates from the previous night’s dinner, I wedged myself into the back seat of a minivan stuffed so full of gaffs, pliers, knives and other sharp implements that I didn’t even bother buckling my seat belt as it was clear that even a minor fender bender would likely result in major and probably life ending impaling. It was a short drive to the marina and after carefully extracting myself and my lunch box from the confines of the rolling cutlery shop, I followed Mike and Rick down the wooden gangway that led to the marina. 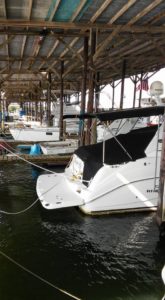 The boat slips at “Pete’s Pier”, as the huge sign on the side of a tall metal building claimed it to be, were constructed of a series of wooden walkways that were affixed to pilings and covered with a corrugated roof. Rather than being tied directly to the dock, the boats were loosely tethered between pilings with enough slack to allow them to rise and fall with the tide. While these wooden walkways looked cool and rustic, they also looked sketchy as hell. The tide being fairly low, the walkway stood at least two feet above the water allowing for a good look at the woefully under built and weather worn supporting structure.

As we made our way to where our boat was tethered, we stepped over broken boards and laughed nervously every time a loose section of dock would sway precariously underfoot. Arriving at the far end of the structure, where three giant center console boats were tied side by side, I was told I’d be fishing on the middle one; Captain Ron Mitchell’s brand new 39-foot Sea Hunter. The boat being bigger and nicer than any center console I’d ever seen, I looked around the port side of the boat just in time to catch a glimpse of a submerged dark shape as it slid menacingly back into the shadows below the dock. 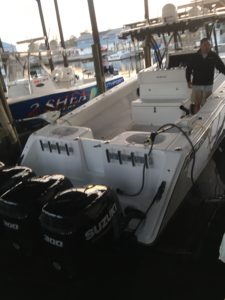 Not sure what I’d seen I turned to ask if anyone else had gotten a better look, when out of nowhere there was a deafening crack and the dock along the starboard side of the boat collapsed. A huge splash followed and a number of people, myself included, scrambled for safety while one person was left to bob amid floating tackle and lunch boxes between the boat and the broken dock. My first thought was that this was no accident. It had clearly been the work of that lurking shape that I now realized was likely the same manatee that’d attacked us the previous day. Expecting a second attack, followed by a froth of water and bright plume of blood, I prayed they hurry as Captain Ron and his mate dragged the soaked and startled Ray Gardener through the boat’s dive door as if he were a large tuna.

To all of our surprise the Yo-Zuri rep came away unscathed from the ordeal and once the rest of us had safely boarded the boat, we left both the run down marina and its floating saboteur in our wake. The slow speed trip through the manatee confrontation zone feeling all the more dangerous. Once past it, Captain Ron put the pedal to the metal and the four 300-horsepower Suzuki motors had us screaming along at close to 60 MPH. Between the roar of the wind and the rock music blasting from the boat’s eight 10-inch sub-woofers, the 50-plus mile run to the fish grounds went by in a blur of speed and adrenaline.

Once we slowed down and I’d regained some of my hearing, I got a chance to meet my fishing partners for the day. The crew was made up of Mike Donigian, the now wind dried Ray Gardener, Saltwater Sportsman and Sport Fishing Magazine’s Dave Morel, Jim McGowan of Raymarine and Brad Wiegman a remarkably energetic writer, photographer, and social media personality. Our plan for the day was to target red snapper, which they referred to as “American Reds”. The officially endangered, yet surprisingly prolific, species being currently out of season we’d be releasing any we caught. Along with the snapper, we were told to expect a variety of other species including gag grouper, seabass, grunts and a litany of assorted whatnots. 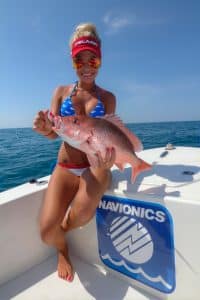 Having had quite enough bait fishing the previous day, I took a pass on the proffered shrimp baited spinning rods the crew was passing around. Instead I headed to the bow and grabbed one of the conventional rods I’d spied on the way out. The combo was a new Okuma Tesoro reel mounted on a 7-foot medium heavy Okuma graphite Rod. The reel was filled with 50-pound Yo-Zuri spectra so I attached a short fluorocarbon leader and tied on a 7-inch Savage Gear Sand Eel I’d found in the tackle locker.

My first cast resulted in a bite on the sink and after a brief but spirited tug of war I lifted a six-pound snapper over the rail. The fishes bite and fighting style was very similar to that of a calico bass, so I felt right at home. After catching and releasing a few more fish alone in the bow, Ray Gardener walked up to ask me where I was from because, pointing at the conventional reel I’d just cast, “people around here don’t use those things like that.” Telling him I was from California, we shared a laugh and discussed just how different the fishing styles were on our two coasts. 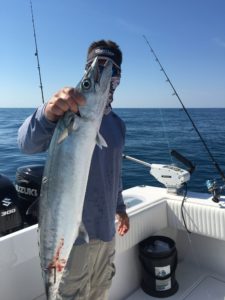 The bite slowed down a bit after the initial flurry and just as Captain Ron was preparing to pull anchor and make a move, one of the live baits they’d been fly-lining got bit by something other than a snapper. Dave Morel grabbed the rod and after a few solid runs, he used the Okuma spinning set up to bring a 10-pound king mackerel close enough to gaff. Once the fish was aboard, Captain Ron and his mate, who are known as the Bandit Fishing Team, proved their worth as kingfish tournament pro’s by deploying a six rod trolling spread faster than I could re-tie a broken leader. With a combination of live bait on the outriggers and rigged ribbon fished dragged on the downriggers he boxed the area to make sure the fish didn’t have any hungry friends.

The rest of the day was spent hopping from reef to reef, some producing good bites and others not panning out. We ended our day fishing a reef that produced several nice gag grouper, which bite and fight a lot like sand bass. The problem was that the trigger fish were also active at that spot and made short work of any Sand Eel that made it to the bottom without getting a bite from a snapper or grouper. Once I’d gone through the last of the lures, I put my rod up and sat back to watch.

Captain Ron kept us entertained with stories of kingfish tournament victories and insanely long runs in rough conditions, sometimes crossing state lines in search of that one big bite. One of the highlights of the day for me was spending the better part of an hour picking Jim McGowan’s brain on how to best utilize the features in the Raymarine eS98 I have on my boat and hearing about all the bells and whistles offered by their new Axiom unit. I don’t have time to detail this next generation technology here but recommend you check it out online. 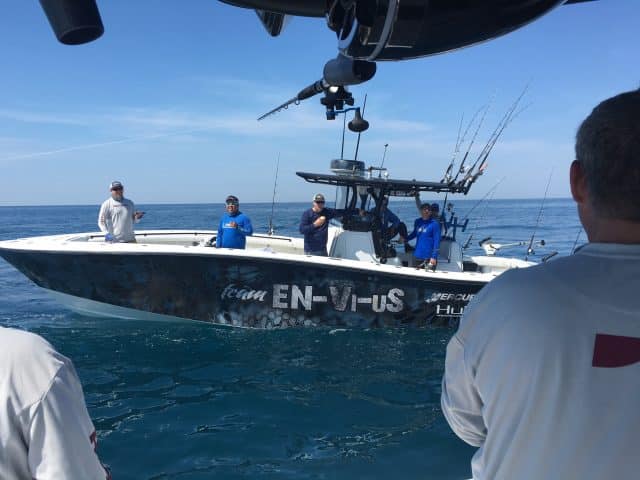 With not a breath of wind on the water, the intensity of the afternoon sun drove more and more of us to seek shelter under the boat’s large T-top and there was only Brad Wiegman fishing. Seemingly impervious to the heat, he stayed at the rail catching fish after fish until our supply of shrimp had been completely exhausted. It wasn’t until browsing through Facebook the week after the trip that I realized he’d somehow managed to film multiples videos and several on the water interviews with the captain and the tackle reps all without breaking his fishing stride. I was truly impressed by his diligence and efficiency.

The ride home was uneventful and by the time we returned to the marina the dock had been repaired enough to show no signs of the sabotage and manatee feeding frenzy that had been narrowly avoided only hours earlier. Nervous, everyone lingered on the boat once it docked not waiting to be the first to test the hastily completed repair. Just as it seemed we were at the point of drawing straws to see who would go, Ray Gardener sacrificed himself for the second time that day, this time not ending up in the water. The rest followed suit, making sure to keep a safe distance between them out of fear of overloading the unstable structure. I was the last off the boat, keeping a particularly watchful eye for any floating objects lurking in the shadows.