Carolina Skiffs have always been well known for their ruggedness, simplicity, and reliability. Now, the JLS series gives these skiffs a new twist.

Carolina Skiff has been building boats for around four decades, has held the pole position as number one in market share among fishing boat builders, has offered three different brands of boats (Carolina Skiff, Sea Chaser, and Fun Chaser), and has produced flat-bottom boats, V-hulls, and at times even pontoon boats. There are a lot of Carolina Skiffs out there on the water. How many anglers reading this right now can reminisce of early fishing experiences on one? Lots of us. And for 2020, Carolina Skiff has a new line of offerings that break their usual mold: the JLS series.

The JLS is, in some ways, a combination between their old splatter-interior J series and their more up-scale linered offerings. They retain the relatively simple and straightforward design and have a modified-V bottom (Carolina Skiff isn’t specifying the exact deadrise, though you can see from the pics that it is indeed moderate). But these boats have full inner-liners, as opposed to add-on pieces-parts for decking.

There are a number of advantages to having the full liner, including producing a stronger structure, offering integrated features and compartments, and of course a cleaner overall look. This means that the JLS series boats come with a lot more standard features (including an 18-gallon livewell, a removable 70-quart cooler, six vertical rod holders in the console, and enclosed overboard-draining stowage compartments in the bow) as opposed to many previous Skiffs. That said, in stock form, these are still on the Spartan side compared to many modern boats.

The list of downsides associated with going to a linered build is short, consisting of additional weight (the old J 16 weighed under 1,000 pounds but the JLS 162 hits 1,372 pounds, for example) and—of course—cost. Prices are something Carolina Skiff doesn’t publish, though we note that a little digging turned up pre-tax and rigging prices ranging from $20 to $25K for the smallest model. That still seems more than reasonable, in today’s boat market.

These JLS models can also be significantly jazzed up as opposed to what many people are used to when it comes to Carolina Skiffs. The rubrail has a black insert, cleats are stainless-steel flip-ups, running lights are LEDs, and the steering wheel is stainless. While the options list isn’t huge, it does include touches like two-tone hullside gel coat or hull stripes, multiple color choices for a Bimini top, a second livewell (in the console), a Bluetooth-equipped stereo system, and bow-mount trolling motor rigging. True, gunwale “rodracks” are Velcro, console holders are plastic rather than stainless-steel, and the helm on the 178/192 has a flip-back cooler seat rather than a leaning post (the 162 comes with a framed seat but no backrest), but overall the fit and finish of these boats are well above what one has traditionally thought of as a “skiff.”

Now, back to those of us reminiscing of the good ‘ol days on an old-style J-series Carolina Skiff—along with the fond memories you probably recall getting soaked with spray and banging your fillings out in a chop in a boat that seemed stripped of all features related to personal comfort. The best news of all is that with the new JLS series, those recollections will remain just that—distant memories. Because the JLS is a whole new kind of Carolina Skiff. 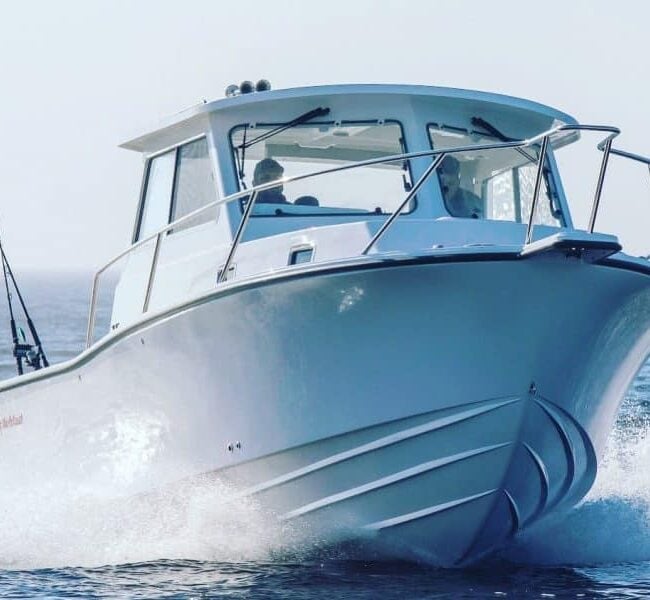