Capt. Brad Philipps reached a milestone by releasing his 25,000th billfish on February 2, 2013, aboard his 40 ft Gamefishermen Decisive off the Pacific Coast of Guatemala, Central America.

Philipps has won The Billfish Foundation‘s Release Captain of the Year Award for the past 11 consecutive years and is widely recognized as one of the most prolific billfishing captains of all time. What makes it an even more special accomplishment is that more than 23,000 of these fish have been released together with his longtime first mate Kennedy Hernandez in the cockpit, fishing in Guatemala.

They first fished together on the Pelagian, and for the past eight seasons they have been on the Decisive, out of his own operation, Guatemalan Billfishing Adventures. 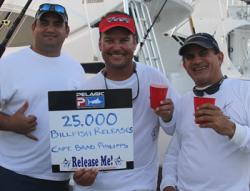 He has caught every species of billfish that swims, caught over 100 giant bluefin tuna up to 1,300 lb and released several Pacific and Atlantic blue marlin of over 1,000 lb in size.

The IGFA applauds and encourages anglers who practice catch and release fishing – so much so that in 2012 the Board of Trustees codified IGFA Release Rules as part of the International Angling Rules, which are currently available in seven languages.

The IGFA has also put forth a set of Release Recommendations, which are intended to help more anglers properly land and handle fish that are destined to be released, ensuring that there will be more and bigger fish for the next generation of anglers.