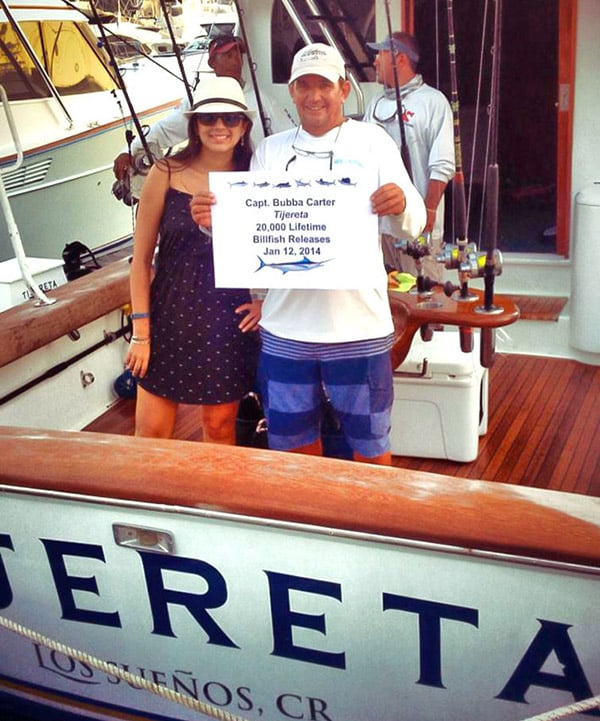 January 12, 2014: To the delight of big game anglers everywhere, news reverberated across the web that Captain Bubba Carter, who currently fishes out of Los Sueños, Costa Rica, released his 20,000th billfish! A multitude of his friends and fans eagerly jumped on line to congratulate him and share in his celebration. This 57-year old veteran Captain currently is operating his Island Boatworks charter boat, Tijereta for charter out of Los Sueños throughout the year.

But he acquired his love of fishing and boating as a child when his father ran a fishing charter boat in the summer and built houses in the winter on Hilton Head, South Carolina, making fishing a natural step for Bubba Carter. His first offshore fishing trip was with his father when he was six years old. By the age of thirteen, he was occasionally working on his father’s boat and then at 15, the legendary Buddy Hester offered him a summer job working as a deckhand out of Hilton Head. By the time he reached 18, he had decided that he would rather be fishing than building and qualified for his captain’s license. Fishing became his full-time career.

When he had reached his 22nd birthday, he had saved enough money to purchase a 36-foot Rybovich, which allowed him to begin fishing Florida, the Carolinas and the Bahamas. He fished for four seasons out of Hilton Head before moving to Oregon Inlet, North Carolina; followed by Singer Island, West Palm Beach, then the Bahamas, Isla Mujeres, Mexico, St. Thomas then Caraballeda, Venezuela, Costa Rica, Panama, Magdalena Bay, Cabo San Lucas and Australia, finally returning to Costa Rica. There are only a few Captains who have traveled to so many areas to satisfy their consummate passion for big game fishing while gaining an unprecedented level of experience, knowledge and expertise during the journey. Captain Bubba Carter is one of those few. Along the way, he has achieved many awards, recognitions and nominations; he has been featured in sports fishing magazines, fished in hundreds of tournaments, and appeared on ESPN! The first time I met Bubba Carter was in November of 2001 out of Magdalena Bay while filming Guy Harvey’s “Underwater Realm Magical Encounters: The Striped Marlin“. Captain Bubba Carter was there aboard the 115′ God’s Will, and a 48′ Sport Fisher, God’s Favor, a mother ship operation. This pair was formerly known as the Hooker and Madam and had been owned by Jerry Dunaway before he sold the entire operation to Craig Morgan from West Virginia in 1999. Our company, Baja on the Fly, was hosting six, six-day live-aboard trips to catch striped marlin on fly each season lasting from late October through late November. During the six-week period, we found ourselves fishing the same waters as Captain Bubba Carter, but he and I had different goals. I shared my knowledge of the local waters and he shared his fishing expertise and by the end of the month we had become friends, as often happens while at remote fishing spots.

Coincidently, one of his guest anglers, Charlie Tombras, of Knoxville, Tennessee, an avid fly angler, was attempting to add another light tippet fly rod record for striped marlin to his accomplishments. No stranger to extraordinary feats with his flyrod, in 1994 Tombras had landed a 208-pound Atlantic blue marlin on 20-pound tippet which still stands as one of only a handful of blue marlin ever caught on fly, as well as other IGFA billfish records to his credit.

During the week Tompras was on the boat, he landed a 94-pound striped marlin on 6-pound tippet exceeding the existing record of 78 pounds and establishing a new IGFA record that is still in the record book today. One day, they fished 6 hours and 45 minutes, and were hooked up all but 45 minutes of that time. During that period, Tompras hooked two marlin on 8-pound test; one pulled the hook after three hours, and the other was light by four pounds. The following day, he hooked six marlin on 8-pound, but four got off and the line broke on the other two.

Both Captain Carter and I returned to Magdalena Bay in 2002 for the annual striped marlin show but unfortunately the stripers were among the missing that year. Our paths didn’t cross again until last December when we bumped into each other at a Tuna Club luncheon. Carter was there as a guest speaker. He described his use of dredges and daisy chains along with his aggressive trolling tactics; he also shared his billfish techniques with the Tuna Club members and guests in the crowded the room. His presentation silenced the group as they listened intently.

I accepted an invitation from Tuna Club member and friend Pete Wishney, who had invited Carter to speak, to stop by his San Clemente home the following weekend to catch up with Carter and hear about the recently discovered blue marlin fishery off the Costa Rica west coast.

Based on Bubba’s enthusiastic description, it definitely sounds as though the area may be at the top of the list for anglers wanting to add blue marlin to their species list.

Apparently last season the blue marlin bite was been incredible at the offshore seamounts about 100 miles from Los Sueños. The offshore trips are all overnight, multiple-day and some trips produced as many as 25-plus blue marlin during the two days of fishing. Carter commented.

“If you want to catch blue marlin, this season is the time to do it in Costa Rica. It’s unlike anything else I’ve ever seen.”

Captain Bubba Carter has earned the respect of anglers worldwide. With over 20,000 billfish released, plus eleven (11) 1,000+ pounders weighed in with the largest weighing 1,234 pounds, eighteen World Records, a Fantasy Slam five — (5) Billfish species in one day, a Super Grand Slam in the Atlantic AND the Pacific Ocean, the 2006 AFTCO Trophy for the most tagged and released Billfish in the world, and he was named the Billfish Foundation Captain of the Year 2006; he was also nominated Captain of the Year 2011 by the Edge Magazine. All of the above was accomplished during his career, which spanned more than four decades during which he traveled to eight countries while he was captain aboard seven different boats.

Carter offers the following advice to anglers wishing to up their game:

“First, fish in a target-rich environment. If you only have only a couple shots a day it will be difficult to improve. Go where the fish are plentiful — places like Guatemala, Costa Rica, Isla Mujeres, Mexico and St. Thomas.”

“Practice makes perfect they say and in the billfish game it’s a must! The more shots, hookups, catches and even losses, the more experience a fisherman can acquire that can only be learned from mistakes while on the rod.”

And finally, “Fish with crews who are willing to teach and will let you hook your own fish. Listen to them, practice your techniques, learning from your mistakes and you’ll become a better angler.”

Throughout his career Captain Bubba Carter has fished on some of the most productive fishing grounds on the planet. Intelligent and easy-going, he always seems to be in the right place at the right time for that catch of a lifetime that remains a cherished memory for his clients and guests who have had the opportunity to fish from his cockpit.

Putting his accomplishment into perspective, many people have fished an equal number of years, and yet have fallen woefully short of the number of releases that Bubba, Ronnie Hamlin, Chris Sheeder, and Brad Philips have managed to tally during their outstanding careers.

“20,000 billfish took 45 years, seven boats, eight countries and probably only a little less money than Obama’s last vacation — plus more blood, sweat and years than a Steven King movie; however, it finally happened!” I know Ronnie Hamlin and Chris Sheeder, Brad Philips have all caught many more than that. However, I’m still fishin’, boys, so don’t slack off!”

Congratulations to my friend, Captain Bubba Carter, for earning his way into that very elite club!