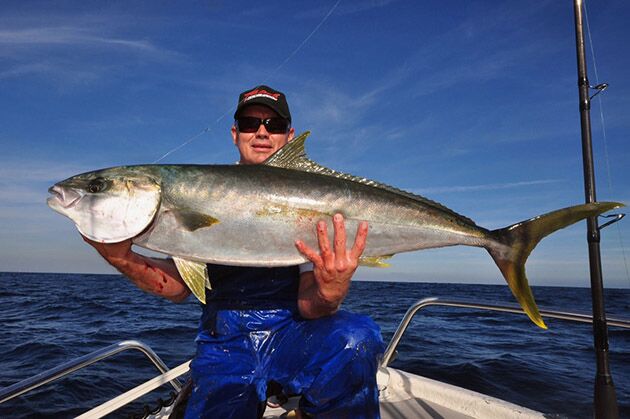 The California yellowtail (aka “Hamachi” for sushi fans) represents a trophy for any West Coast angler. These medium sized jacks are a close relative to the amberjack and qualify as a true game fish by almost any measure. They prowl both near shore and offshore waters, eat both live baits and lures, and pull like a freight train. To top it off, they make excellent table fair both cooked or served as sushi. 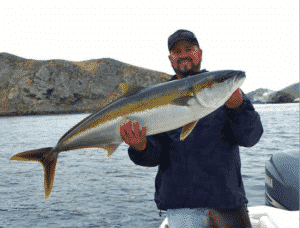 Yellowtail can be found from Central California all the way to Cabo San Lucas and throughout the Sea of Cortez. For California anglers, the prime season for catching yellowtail is from spring until fall. That said, it’s not uncommon to catch a resident “mossback” monster during just about any month of the fall or winter.

These scrappy fighters typically range from seven to twenty -pounds. 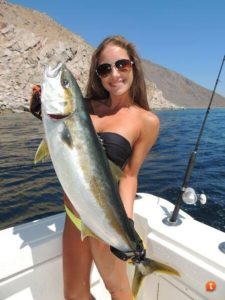 However, it is not uncommon to run into a thirty-plus pound “mossback” model at one of the coastal islands or along the California/Northern Baja coastline.
Mid March typically brings large schools of eager, medium size fish (12-20-pounds) migrating up the coastline from Mexican waters. Savvy SoCal anglers carefully watch fish counts from party boats and blogs waiting for the signs that the fish have shown up to kick off the fishing season. 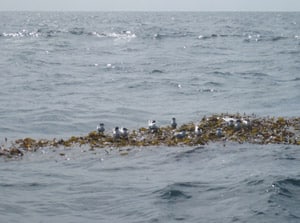 As the summer months approach a second body of fish will migrate north through offshore waters and can be found lurking underneath floating mats of kelp (kelp paddies) that have broken loose from the Northern California coastline. This offshore fishery brings anglers in boats of all shapes and sizes searching for these fish-rich kelp paddies. By July, these same kelp paddies will be holding tuna, mahi-mahi and even striped marlin. 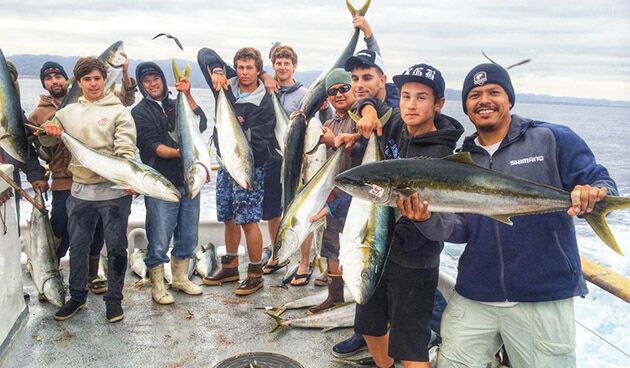 Perhaps the best trait of these great gamefish is their accessibility. Yellowtail can be caught from boats large and small, both charter and private. For new anglers the best option is to hop a ride on one of the great party boats out of San Diego. Boats like the San Diego out of Seaforth Sportfishing or Malihini out of H&M Landing specialize in chasing yellowtail from La Jolla to well below the Mexican border. If you’re looking for a more personal experience, there are a variety of six-pack charter boats that that stay on top of the bite from spring through fall. All of these boats offer plenty of experience and all the gear you need to get started. 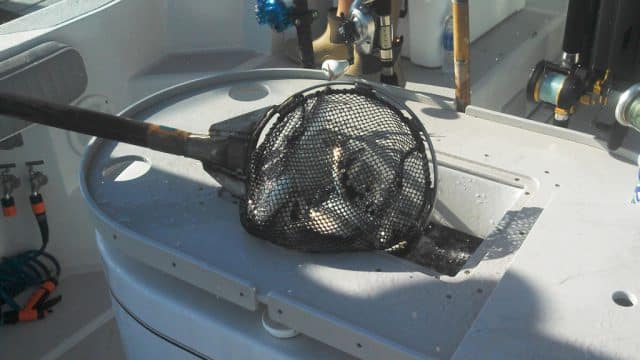 Yellowtail can be caught using a variety of tactics but the most common is live bait. California anglers are blessed with “bait barges” that are loaded with live sardines, anchovies, squid and mackerel. Nearly every boat leaving port in search of yellowtail will “tank up” with a load of hot live bait. Gear for live bait fishing is very simple. A medium weight, 7 to 8-foot conventional set up loaded with 25 or 30-pound test makes for a perfect set up. While not always necessary a short 3 to 5-foot fluorocarbon leader can help in a picky bite. 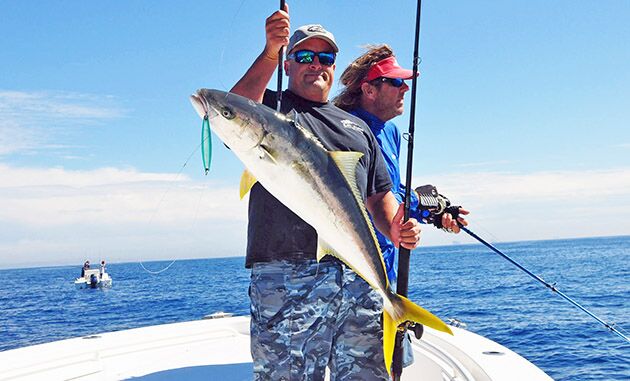 The other method of catching yellowtail that is preferred by many anglers is “on the iron”. Iron lures are as uniquely Californian as the fish taco. Iron lures come in many shapes, size and colors but generally fall into two categories, “surface iron” and “heavy iron”.

Fishing “the plug” or surface iron is considered by many (myself included) as the epitome of California sportfishing. Surface iron lures are made from a combination of light metals and painted to match local baitfish. These unique lures “swim” along the surface with side-to-side wobbling action and occasionally “kick” out to the side with a quick motion. 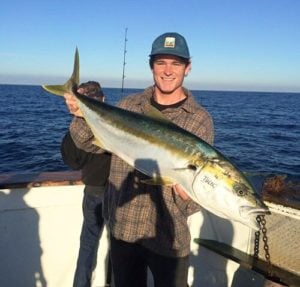 It’s this kick that drives predators crazy and the visible surface bite that makes anglers scream.

Surface irons are generally cast on a conventional rod and reel setup known as a “Jig Stick”. A jig stick is a light to medium weight rod ranging from 8 – 10-foot (typically a 9-foot rod such a Calstar 90J or Phenix PHD928MH) matched to star drag reel in the 20-size class.

Jig sticks have a soft tip that shuts off about mid-rod. This soft tip allows skilled anglers to lob, toss and fire these light lures sixty yards, plus at a variety of lofts to use or combat the wind. Many times yellowtail (or bass and barracuda) will pop up 50-60 yards from the boat and skilled jig tossers are the only ones who can reach these fish and score an awesome local trophy.

Heavy iron lures generally smaller and stockier than surface iron. Heavy irons are made from a blend of heavier metals and are designed to sink quickly. Most anglers use a stout 7-foot rod matched with a reel spooled with 30-50-pound test. 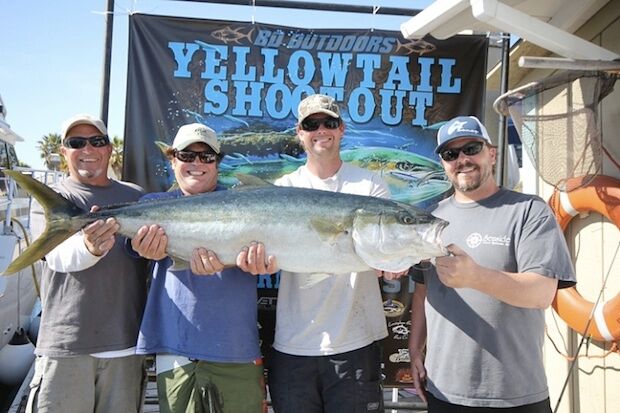 Anglers break out the heavy iron when the fish are down deep or suspended. Many times the fish will hang around deep-water pinnacles in 100-300-plus feet of water. When fishing these spots the captain will position the boat upwind of the spot far enough to give the anglers irons time to sink to the bottom. Once the angler feels the bottom they will immediately put the reel in gear and wind as hard as they can. After about 100-feet of this intense winding, the reel is again put into freespool and the process is repeating. This technique is known as “yoyo” fishing for obvious reasons and can be downright deadly for fish holding tight to structure. 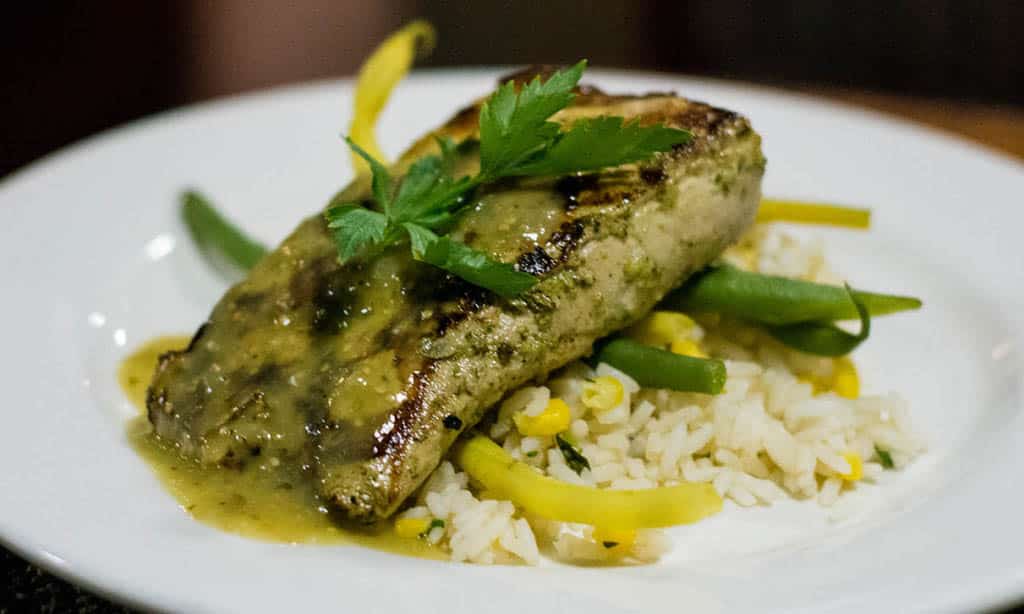 Once you bring your hard earned catch home and prepare it you’ll be equally impressed with its flavor and versatility. Fresh yellowtail is awesome on the grill, made as ceviche, raw or just about any other way you can think of.

We invite you to come on out to California and see what all the excitement surrounding this great fish is all about!