I got a text yesterday.  “So this just happened…”

It was from Josh Lish, a commercial fishing buddy of mine who runs out of Oceanside Harbor.  He sent me pics that I viewed on my phone.  We’ve been catching bluefin in excess of 300-pounds this year (see my post from last week!).  So, I have to be honest, my first reaction was “265…that’s nice.  Congrats buddy.”

Josh said he thought it might be a California state record yellowfin tuna.  I know the world record is 427, caught by Guy Yocom on September 18, 2012.  Guy famously collected on a $1 million dollar reward for catching the fish on a Mustad hook off of Puerto Vallarta.

The California Department of Fish and Wildlife lists the current California state record yellowfin tuna as 239-pounds caught off Catalina Island by Ronald Howarth on November 24, 1984.

Josh was out fishing with his buddy Nicholas D’Amato on the St. Nicholas when they got a call on the radio.  It was another buddy, Bo Scanlon, also a commercial fisherman, out of Vista, California.  Bo was fishing solo on his boat, the M Too.  He had hooked into something big and called Josh to come and drive his boat while he fought whatever it was on the end of the line. 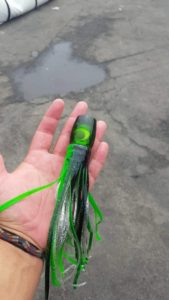 Although he’s a commercial fisherman, the goal yesterday was to catch and release the first marlin of anyone in the Oceanside Anglers Club.  It had been a slow day.  No sign of fish all morning.  He was in 68-degree water on the 312 when he got bit.  Bo didn’t see the bite, but judging by the load on the rod and how fast it was taking out line, he knew it was something good.  He called in Josh and did the best he could until the cavalry arrived.  It was an hour and 15 minute struggle that kept him pinned in the back corner of the boat.

Bo: “In all honesty, I would not have been able to land that fish without Josh’s help.  He drove and kept us positioned so I could stay in that back corner and he stuck the first gaff into that fish.”

Stoked, they returned to Oceanside, knowing that something special had just happened.  When they weighed it back at the dock (below), they found out just how special. 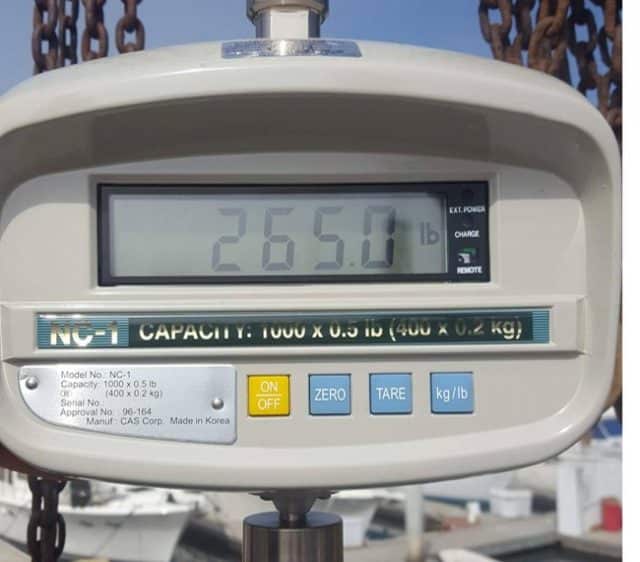 Hopefully, Bo and Josh get their California state record yellowfin tuna certified.  Either way though, it was definitely a day they’ll remember the rest of their fishing days.  Good luck guys!

Speaking Of That Fish From Last Week… 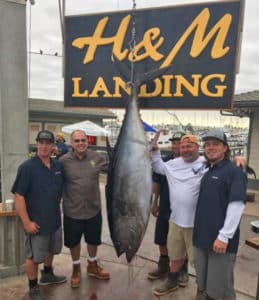 You’ll remember that last week we were talking about the 345.1-pound bluefin tuna caught aboard the Ranger 85.

Capt. Robert Gray (far left in the picture at right) was out on their subsequent 3.5-day trip and he wasn’t able to get back to me in time to include his comments in my article.

The story he ended up sharing with me was pretty cool, so I wanted to share with you all too.  Enjoy!

“A lot of our people had the gear for big bluefin so we went to Clemente to look for BFT Day 2.  We hooked one on a jig early am and landed it on 80#. It was a 160-pound BFT.

We found another school shortly after.  Started throwing bait and the fish started blowing up all around the boat!  We saw fish from 80-pounds to over 200 boiling on sardines all around the boat.  We hooked 4.  Two guys got spooled, 1 broke off and 1 stayed connected.  While fighting that last fish we put the kite out and I went to go help our angler on the bow fighting his fish.  Joe (Roder, the angler) happened to be standing right next to me, so I asked him to hold the rod for me.  Next thing you know, he’s on and the fish has almost spooled a Makaira 50 loaded with 130# braid!  After a 145 min fight, the rest is history.”

Talk about being in the right place at the right time!  Congrats again to Joe, Capt. Robert and the Ranger 85 crew.