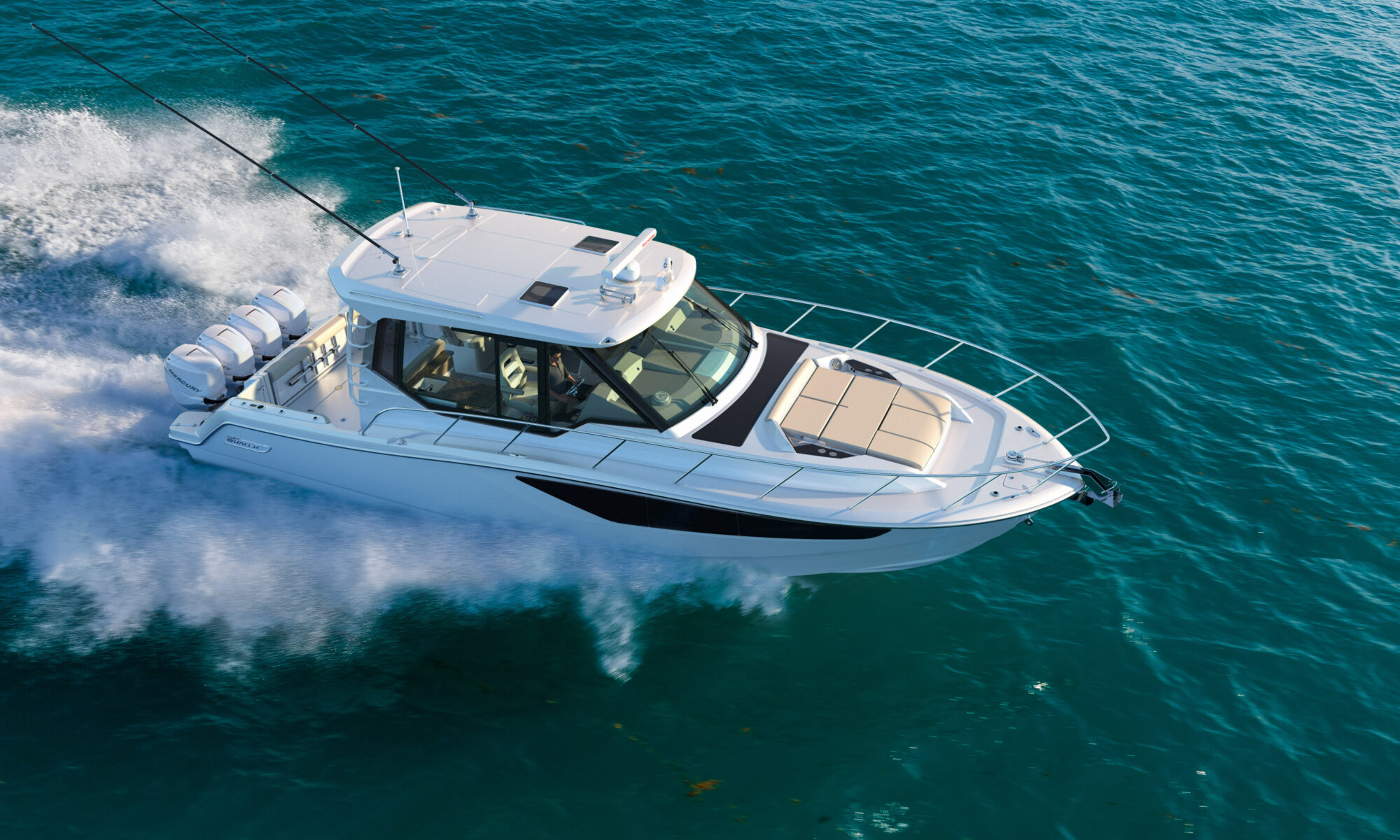 Unsinkable? Sure, but that’s just the beginning of the Boston Whaler story including the 405 Conquest.

We all know that Boston Whaler boats of all shapes and sizes are unsinkable, ranging from small models like their 15-foot Whaler to mid-sized models like the 230 Outrage, to big and beefy boats like the 345 Conquest.

Shocker alert: their newest offering, the 405 Conquest, is built with their same glass-foam-glass sandwich construction method and this one’s unsinkable, too. We love that, but as important as this detail might be, it doesn’t even begin to deliver the full story on this boat.

The moment you step aboard the 405, you’ll note that the boat dedicates a lot of its footprint to the cabin area. The helm deck is huge, and the lower cabin is spacious enough to house a fully-enclosed private stateroom forward, a saloon with a dinette and a compact galley, a fully enclosed stand-up head with a separate stall shower, and a roomy mid-cabin berth that’s capped off with a privacy curtain. Added bonus: overhead rodracks are integrated into the mid-cabin for six rigs.

As is always the case with cabin boats, expanding the cabin means losing space in the cockpit, which Whaler has further changed by designing in options for a sort of bump-out in the transom. This can house either a rigging station with stowage, a sink, and a 40-gallon livewell, or an outdoor galley with a reefer, electric grill, and sink. If you don’t opt for the rigging station, and you’ll be left with a single 19-gallon livewell in the port side of the transom.

Considering these arrangements, will the 405 Conquest be the pick of the die-hard, blood-and-guts crowd who want to maximize cockpit space and sheer fishability? Probably not. But this is a nod to reality from Boston Whaler, as these folks know darn well that while the people buying their boats like to fish, they also like to cruise or spend family time aboard—and they consider being comfortable just as important as those fishing attributes.

To check all the luxury-factor boxes, Whaler goes the extra mile. Yes, of course, there’s a Seakeeper gyroscopic stabilization option (you’d be nuts to order the boat without it), and things like a 5200 BTU air conditioning system, a Fusion RA770 stereo system, two flat-screen TVs with Apple TV integration, and a helm-deck wet bar with a refrigerator, sink, stowage, and 120-v outlets. But look a bit closer and you’ll quickly realize that Whaler has also used high-end items like Ultraleather and Omnova SofDura (with PreFixx protective coating) upholstery; real satin-finish teak in the cabinetry, doors, and soles; and Corian in the countertops.

One of the more interesting touches Whaler uses is the refrigeration for the coolers and fishboxes, which is a glycol system that eliminates the need for the usual freezer plates. It was sunny and 85 degrees in Miami when we were on this boat, and we can attest to the fact that it’s thoroughly effective. Whaler also says that it’s more energy-efficient than common plate systems and gets cold enough to make a brine slush in the 72-gallon in-deck fishboxes. Combine that with the 55-gallon drink box integrated under the port-side helm-deck seat, and you basically eliminate the need to buy and haul ice before every fishing trip.

And yes, Whaler does take care to include all the other must-haves for anglers. There are five flush gunwale rod holders (the sixth is lost to the dive door in the port side); five across the transom; under-gunwale racks; three rocket launchers down each side of the hardtop supports; toe-rails with downrigger ball holders in the cockpit; and the standard electronics package includes a pair of Raymarine Axiom XL 16” displays, an RV-1000 Realvision sounder (with 3D), and a B275 one-kW through-hull transducer. Oh, and did we mention that quad Mercury 300s also come standard? If that’s not enough oomph for your taste, you can upgrade to quad 400s. They’ll get you cruising speeds in the low to mid-30s, and a top-end breaking 50 mph.

You’ve gotta love how Boston Whalers take buoyancy to a completely new level, no matter what size model you’re talking about. But in this case, Whaler’s unsinkable nature barely scratches the surface. Do you want to dig even deeper? Check out the 405 Conquest.