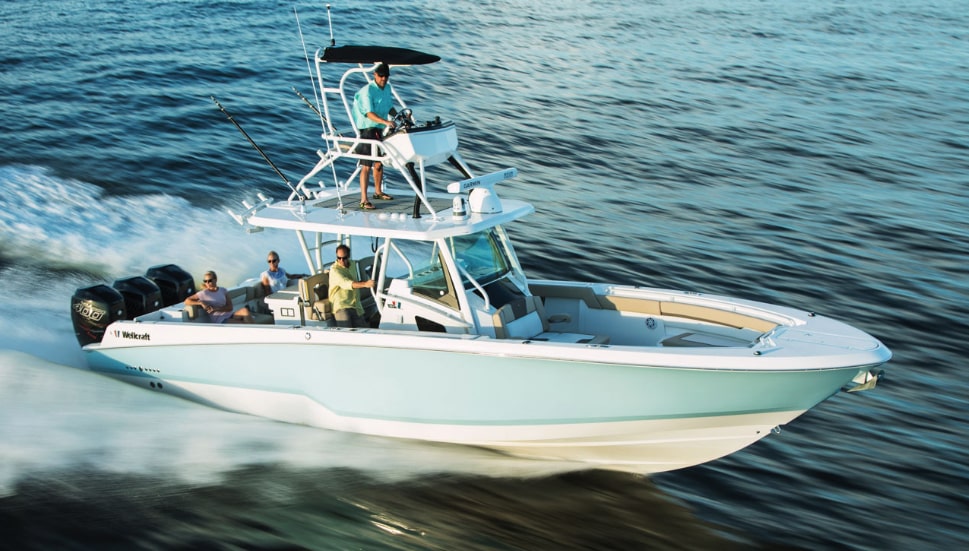 The Wellcraft 352 Fisherman is not what you were expecting.

I’m walking along at the 2018 Fort Lauderdale International Boat show, drooling over the monster convertible fishing boats along the docks and the red-hot center consoles in the convention center, when a boat stops me in my tracks. This is no easy feat, even for a 35-footer with triples strung across the transom. These days, three outboards on one transom seems almost mundane. True, these are Mercury Racing 400Rs and at 1200 horses, the boat does carry more juice than your average triple-engine fishing machine. But what really grabs my eye are the pipes. Because setting all other factors aside, you won’t find a center console on the water with pipework that matches up with what’s on the all-new Wellcraft 352 Fisherman.

The first eye-grabber is the built-in aft ladder to the hard top. If you buy this boat and don’t get a crow’s nest with upper controls, someone ought to smack ya. The next stand-out is the inclusion of side-winding “kingfish style” holders, angled out from the corners of the top. Then, notice that the upper station is hinged both at the feet and also at the Bimini over the controls, so you can lower it as necessary for getting under bridges. Now take note of the fact that the forward legs are lined up with the corners of the console itself, so they don’t create tripping points. And finally, soak in the integrated lighting, stereo speakers, overhead electronics box, outrigger mounts, and canvass tracks in the hard top. That’s all great stuff that’s easy to get excited about, right? But what really pulls it all together is when you give the welds a close examination, and see consistent feathering, no bubbles or smudges, and all-around high-quality craftsmanship.

Though they’re an imperative ingredient, pipework and hard tops alone do not make for a sweet fishing boat. So as your eye wanders down onto the boat itself, you’ll want to check out the helm and leaning post. The three-seat flip-down bolster helm station is backed up with a huge prep station with a reefer, a 35-gallon clear curved livewell (there’s a second livewell in the transom), and built-in tackleboxes. There are additional tackleboxes that swing down from the inwales, and you’ll spot some smart touches like foam padding where the reels sit in the under-gunwale rodholders.

There are both side gunwale and transom doors, plus macerated fishboxes in the deck. Anglers who haul a big crew will also take note of the folding transom seats, which will be great when there are lots of people aboard, but are the one fishing sacrifice made for comfort which we spotted in the cockpit, since they do eat up a bit of space and don’t fold flush.

The bow cockpit is also a bit more inclined towards comfort. There’s a comfy extended lounge built into the front of the console and flanking bow lounges have removable backrests, which thankfully have rodholders for the receivers. But there are also a couple of pedestal table mounts up there. Blue-bloods, have fun with that – we anglers will perpetually leave the table at home in the garage, where it belongs. We will, meanwhile, enjoy the fact that the bow cockpit has low-profile grab rails, an anchor locker with a through-hull windlass, and a cooler up forward instead of just another usual stowage compartment.

When you buy a boat like this (NAP price: $253,333) you naturally expect to get eye-watering performance. No worries, people. With the triple 400Rs the Wellcraft 352 Fisherman will cruise in the upper 30s, and blast past the 50 mph mark without hesitation. You want to push harder and faster? Go for the triple Yamaha F425 XTO Offshore outboards.

What else do you need to know about this boat? Yes, there’s a small cabin inside the console, with a head and a berth. Of course it houses a Seakeeper gyro-stabilization system to radically reduce rocking and rolling. Naturally there’s pre-wiring installed for electric downriggers. What about a kicking stereo system, fresh and raw water washdowns, a 12-V outlet, and USB charger at the helm – do you really need to ask?

The unique pipework may have been what drew our initial attention to this boat, but there’s a whole lot more to be seen on this awesome fishing machine. 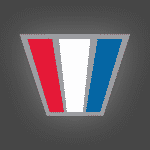 Get more great boat reviews and info from Lenny Rudow on BD.