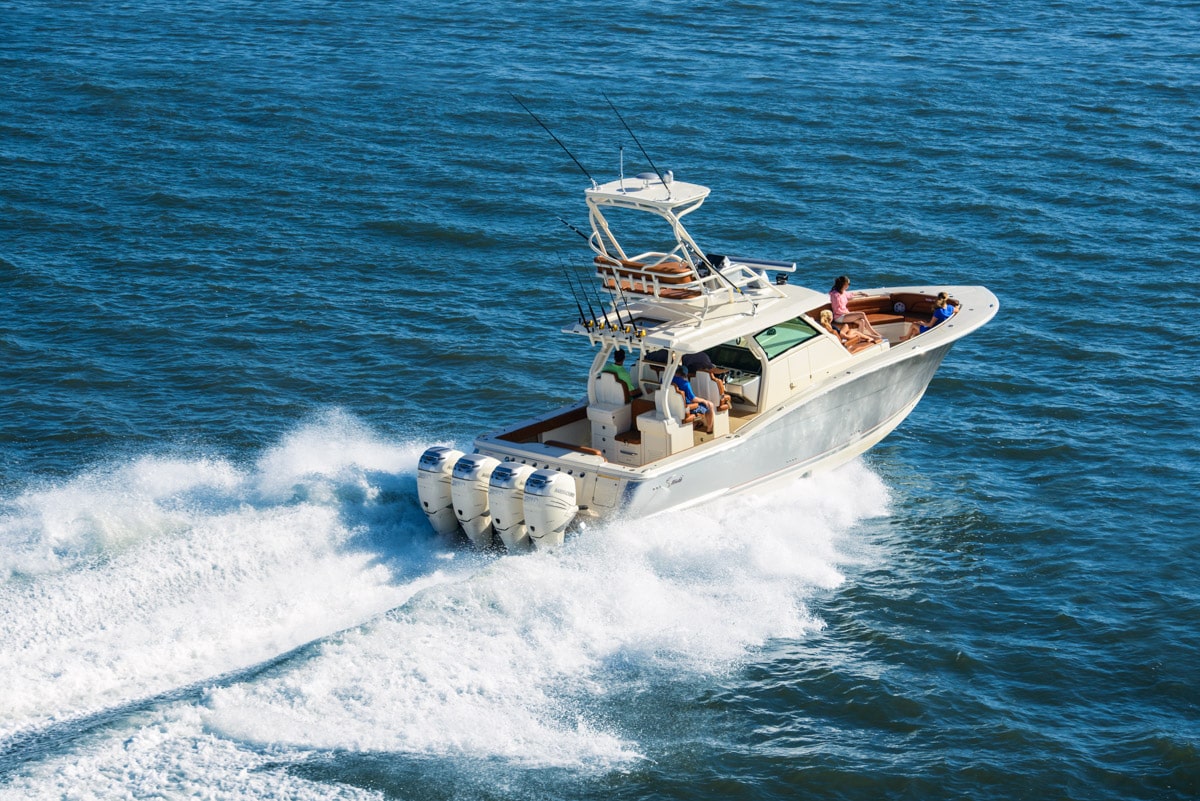 If you want a center console that can run with the big dogs while placing you squarely in the lap of luxury, the Scout 420 LXF is a must-see model.

There was a time when center console fishing boats were all about blood, guts, and glory, but boats like the Scout 420 LXF take things a step farther. Actually, this quadruple-outboard, 16,800-pound, high-tech center console yacht takes several steps beyond what most people think of, when they imagine today’s fishing boats.

Those of you with sharp eyes and a solid background in boats may have raised an eyebrow at that 16,800-pound displacement figure we just mentioned. That seems unrealistically light, for a boat of this size. Look at the Grady-White 456 Canyon, for example, which is slightly larger yet weighs far more at 24,500-pounds. Or consider the Freeman 42, which is over a foot narrower than the Scout yet still tops its displacement by 700-pounds. What gives? The Scout is an epoxy-infused hull laid up with carbon and E-Glass. The stringer system and deck are also infused. Working within the confines of modern technology, that’s about as advanced as layup gets and it results in the optimal strength-to-weight ratio.

Take that minimal weight, and add in a twin-stepped hull design with 400-hours of testing behind it. Now load quad 350’s onto the transom, and let her eat. Top end hits an astonishing 65 mph. Cruise at 4500 rpm is a hair over 43 mph. And even more surprisingly, the boat maintains close to a mile per gallon (0.9 gph) at speeds between 40 and 50 mph. You say you want even more speed? Jump up to quad Mercury 400R outboards and you’ll enjoy an eye-watering 71.3 mph top-end.

Whether you take the helm, kick back in the bow, or climb into the tower, one of the first things you’ll notice about the Scout is that the seats are uber-comfy. The upgraded textured Brisa Utrafabrics have a leathery look and feel but are durable and breathable. Multi-density flow-through foam ensures that the cushions don’t hold water, and you don’t “bottom out” against the seat-bottom. And fold-down arm rests plus fold-up bolsters make the helm and second-row stadium seating utterly luxurious.

Air conditioning vents blow a chilly breeze across the helm seats, much less into the console cabin. And inside that console you’ll find a dinette that converts into a full berth, a stand-up head, and a galley with a sink, stove-top, refrigerator, and microwave. For gosh sakes, Scout even offers a built-in Keurig option.

The most luxurious spot on the boat, however, is probably the bow. The top of the console cabin is capped off by a pair of contoured loungers that will satisfy E-Z-Boy fans. Forward, a dinette table rises off the deck to become a dinette or can be lowered and with the filler cushion, become a sunpad. And small enclosures in the sides have gasketed hatches, pads in the bottom, and USB ports in the side, so everyone lounging around up there can keep their cell phones safe and charged.

On the flip side, making the bow into an entertainment zone does come with a cost for you die-hards. This space isn’t exactly utilized for maximum fishability, and some serious anglers would prefer to have a bare casting deck up forward and a coffin box as opposed to the expanded cabin with loungers on top. Still, remember that this is a 42-footer. Most of the fishing will take place from the aft cockpit and on boats of this size the bow isn’t utilized for fishing space nearly as often.

Okay – enough about all that other stuff. How about fishing from this platform? As one might expect, Scout can build a tackle station into the back of the rear helm seating, which has tackle drawers, a rigging station, and a fold-up fighting chair. The chair doesn’t swivel so this is really still a stand-up boat, but it will come in handy when kids or small anglers are pitted against large fish. Swing the bottom of that chair up on its gas-assist struts to access the machinery space where a Seakeeper gyro lives. Or, if you prefer, the entire arrangement can be swapped out for a big aft-facing sea with a “summer kitchen” built-in, including an electric grill, a refrigerator, and a sink. Either way the 80-gallon livewell is housed in the transom and a pair of 92-gallon fishboxes are integrated into the deck.

One of the most forward-thinking fishing features on this boat is actually the washdown system. How many times have you been on boats where a washdown is located down low, and bending down to reach it is a pain in the butt? How many times have you seen the hose handle get hung on a rocket launcher or a rail to keep it within easy reach, even though the hose then gets in the way? Scout solved this issue in quite an ingenious fashion, by integrating fresh and raw water washdowns into the hardtop supports. Grab and pull and the hose comes right out, then when you’re finished sluicing off the blood and slime, it retracts right back into the housing.

So, is the 420 LXF really the ultimate fishing boat? For some people the answer will be yes, and for others, it will be no – that’s a matter of where your priorities lay. But we can say one thing for sure: this is one center console yacht that plays in the big league. 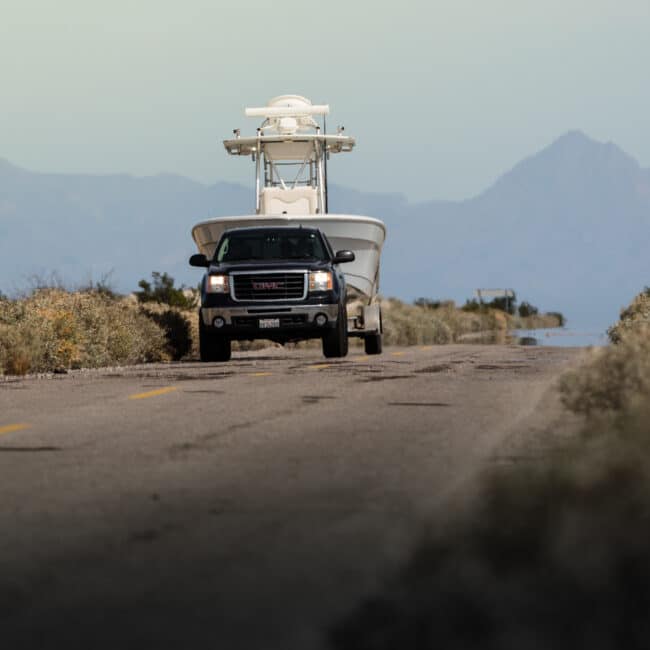 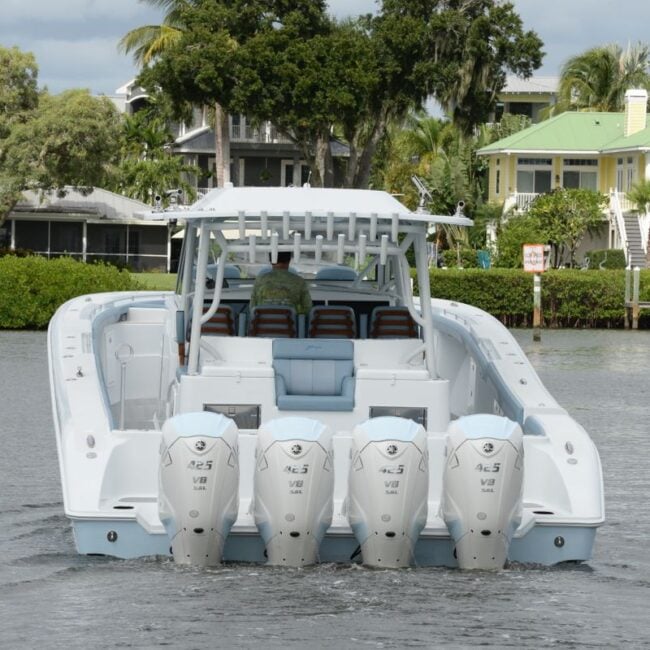