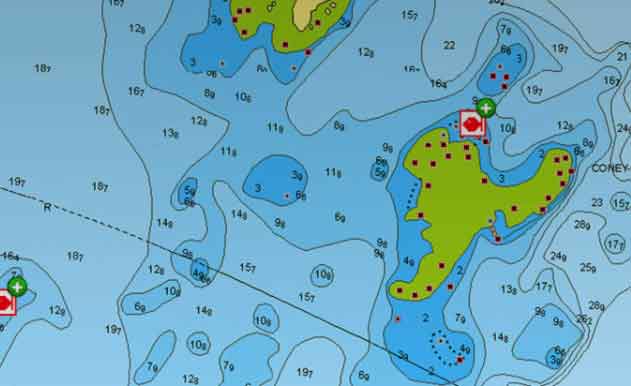 What type of digital charts live in your chartplotter? And, are they the best choice for your needs?

Okay Ahab, we’re guessing you already know about the BD free fishing charts and you surely have a chip in that chartplotter, so roll up those paper charts and stow ‘em. Yes, we know that every electronic navigational device invented by mankind says to have a hard-copy backup aboard when you first fire up the LCD screen, and that’s good advice that we’ll always take to heart. But the fact of the matter is that in this day and age chartplotters and GPS have become so darn reliable that those old paper charts and parallel rules may well remain stowed away for the entire time you own your boat. And while the accuracy of GPS has grown to be so good we can essentially call it “pinpoint,” there’s still one aspect of modern electronic navigation that shows room for improvement: digital charts. In fact, which type of chartography you use can have a rather major impact on what you see on the chartplotter screen.

Digital charts can be broken down into two main categories: raster, and vector. Raster charts are digitized (scanned) NOAA charts, and though they appear on your chartplotter screen, they maintain that traditional look of paper charts. When you glance at the screen if it looks more or less like a photo of a paper NOAA chart, it’s almost certainly a raster.

Vector charts, on the other hand, are built digitally from the ground up. This comes with a lot of advantages: they can incorporate multiple databases and information levels, offer a custom look and feel, and in many cases can be updated quickly and easily. However, that doesn’t make them perfect or even necessarily superior, at least not in all cases. They are subject to odd and surprising quirks like any other digital entity (just ask anyone who’s tried fruitlessly to zoom in on a depth sounding too small to read, only to discover that it remains that same size even as the rest of the chart grows larger), they often cost significantly more, and different varieties don’t always play nice with different manufacturers.

Raster and vector charts also share one major downfall: they tend to be wrong with rather shocking regularity. One reason is that much of the information in most vector charts comes from NOAA (and all does, of course, on raster charts) which often includes lead-line readings dating back hundreds of years. Another problem is that many surveys in the databases were done prior to GPS (remember, it’s only been around for a few decades) or with early and less reliable GPS. Finally, as you surely already know, things change out there. Sand bars shift, channels fill in, and holes get scoured out.

On the bright side, modern vector charts are getting better and better by the day—literally. The ability to upload and download more or less constant updates and the involvement of the average mariner with crowd-sourced depth readings means that our charts can get better and better every time we use our boats. The inclusion of WiFi and Bluetooth in most new MFDs has made shifting this digital data virtually effortless, and the success of the Navionics app has made it possible for countless people to not only use their phone as a chartplotter but also share the data constantly being gathered by their fishfinders with the wider world. In fact, there are now literally millions of people contributing to crowd-sourced chartography.

The latest trend? Redrawing your chartography in real-time. As your boat moves the charts redraw themselves according to your GPS position and the pings of your fishfinder. And don’t think that harnessing such advanced functionality comes at a heavy price—even some relatively inexpensive model lines (like the Raymarine Element, Lowrance Hook,  or Garmin GPSMAP) can now perform this task.

So which digital charts are best for you? First, let’s state outright that each of the many different versions out there have their own advantages and disadvantages. And in many cases the decision as to what options you have has already been made for you, by the manufacturer. When you have a range of options, however, remember to take the following factors into account:

When you know the answers to these questions, the next step is to start looking at the different individual digital chart options out there and figure out which is best for you, personally.

How To FishMarine Electronics
Top Bottom