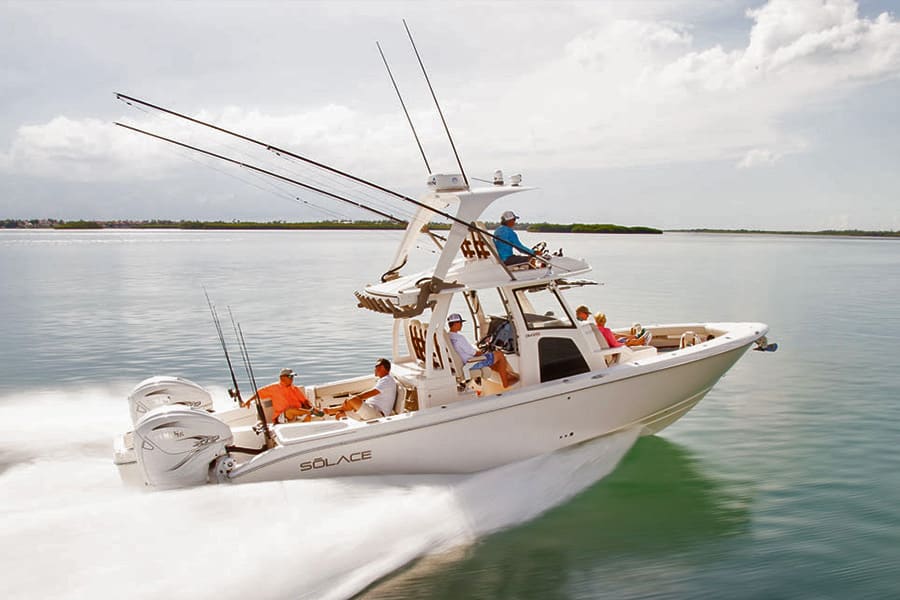 The Solace 345 is unlike any fishboat you’ve ever seen before. Period.

Month after month and year after year we check out a slew of new center console fishing boats.  Some are plain vanilla, some are more unusual than others, and a rare handful are truly distinctive. But it’s been years since we’ve run across a new center console fishing machine so ground-breaking and unusual that we could call it a completely unique one-of-a-kind boat. Meet the Solace 345.

The most unusual design trait of the Solace 345 hits you the moment you see it: the cockpit extends aft between the Yamaha F425 outboards – which provide a cruise in the mid-30s and a top-end of around 55 mph – mounted far apart towards the outboard edges of the boat. This isn’t just a walk-through transom, it’s a walk-out transom which Solace calls the “FishThru”. You can literally stand aft of the outboards as you fight fish – and the extension doesn’t end there. Swing open the door, press a button, and a hydraulically-actuated swim platform slides out from underneath.

Flanking the cockpit as you head aft there are 45-gallon livewells to either side. But these are no common livewells. They’re pressurized, fed by a sea chest system, have clear viewing ports in the hatches, and incorporate a tuna tube into each side. Rounding out the cockpit fishing features there are three vertical rod holders on each side, a pair of seven-foot fishboxes in the deck, plugs for your electric reels or downriggers, dedicated stowage compartments for a pair of five-gallon buckets, and beneath the waterline, there’s a pair of Shadow-Caster full-spectrum RGB LED underwater lights.

Now turn around and look forward. There’s a hydraulically-actuated three-wide aft-facing seat that pops out of the back of the base for the helm seats, plus a sink, tackle stowage drawers, and a refrigerator/freezer. There’s also an electric grill. We admit that these goodies will be enjoyed by many people and probably has to be included on a modern boat in this class, though we also point out that a simpler rigging station with more room for gear and fewer fancy gadgets might be preferred by the blood-and-guts crew.

Move forward a few feet, and there’s not an angler alive who won’t be thrilled by this helm. The three flip-up bolster seats rest atop Shockwave S5 shock-mitigating mounts. The flush-mount electronics flat is lockable and has enough space to support a pair of 17-inch Garmin 8617 MFDs with room to spare. Take a swipe on the screen, and play with the CZone digital switching system.

Now look up. Hopefully, no one made the mistake of failing to opt for the upper station – we say not getting it would be utterly tragic. It comes with full controls, a folding buggy top, and flip-down bolster seats with flip-up backrests.

As is the case on many larger center consoles these days, the console is blown out a bit to create a cabin as opposed to a mere head compartment, and forward-facing loungers sit atop the front section. Yes, there’s a price to pay for this design in the loss of forward deck space. And in another nod to comfort over carnage, the bow is also flanked with a pair of forward-facing lounges. Inside the console, there’s a small settee that folds down into a berth, a mini-galley with a microwave oven and a sink, and the head, all of which are kept chilled by a 6,000 BTU air-conditioning system. 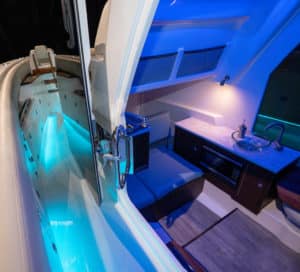 Construction-wise, the Solace 345 continues its unique streak – epoxy infusion and carbon fiber are part of the mix, but so is Innegra. This stuff is one of the most advanced fibers around, which is lightweight, hydrophobic, high flex-fatigue, more impact-resistant than regular fiberglass, and even has vibration-dampening properties. Fasteners are chrome-plated 316-grade stainless-steel, wiring is all tinned-copper, and all-aluminum gets a CeraKote anti-corrosion/anti-adhesion ceramic coating treatment.

Okay, so where did all this craziness come from? Does the name Dougherty ring a bell? In should, because this family has played a huge multi-generational role in the world of center consoles. Bob Dougherty was a legend at Boston Whaler, and a founder at both Edgewater and Everglades. His son Stephen, who apparently also has resin running through his veins, was at Edgewater and Everglades. And his latest brainchild is – surprise – the Solace 345. We’ve never seen anything quite like it.