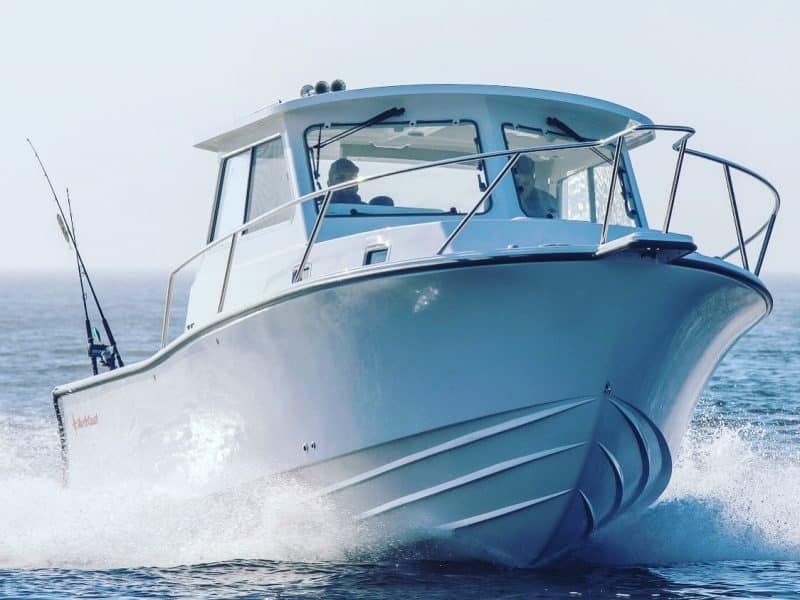 With a North Coast 285 in the slip, you’ll cast off the mooring lines come rain, sleet, or snow.

Yes yes, we know: center console fishing boats are usually thought of as the best all-around fishing machines. But let’s pose a question. What if you have lousy weather and thanks to the full exposure of a CC, decide that you simply can’t go fishing in the first place? Some young bucks may scoff at the notion, but even hard-cores will want to think twice before donning the Grundens punching through the inlet when it’s snowing and blowing. That’s why many year-round anglers and some of us who are slightly more aged prefer to maintain a certain comfort level and may opt for pilot house boats. Boats like the North Coast 285.

What sets the 285 apart from the field? Start in the cabin, because this will be interesting. Like many cabin boats of this size, the 285 is laid out with a V-berth forward, a stand-up head to starboard, and a small countertop/stowage/galley area (a microwave is optional) to port. We should note that the cabin is a bit more spacious than those found on many competitors. But if you go down below, turn around, and look aft, you’re in for a big surprise: there’s a mid-cabin berth carved out under the helm-deck. Much as we love many of the other boats in this genre, like the Parker 2820, the Defiance 290, or the Steiger Craft 28. None of these models have a similar extra berth. It nets you space for two additional people to crash out between bites on an overnighter, or the ability to go weekending with the kids aboard. True, the aforementioned models may have more emphasis placed on maximizing cockpit space, and the North Coast’s fishing arena isn’t quite as large as theirs. But if you plan on spending any significant time belowdecks or want to have weekending abilities, that mid-cabin is a significant perk.

The cabin does, of course, play second-fiddle to the cockpit from an angling point of view. And while the cockpit may not be the biggest in its class it’s certainly well laid out. In fact, the tackle station is a serious high-point, with a 40-gallon livewell, and some rather massive tackle and gear stowage: four boxes, three big drawers, plus a bulk stowage area, plus knife/pliers/rig holders, plus a cutting/rigging countertop. Again, this brings up a real differentiating factor between the North Coast and other boats in the class. By moving all of these items forward they can keep the transom rather svelte. Many of the transoms on today’s fishboats are on the bloated size, housing livewells and fishboxes that force the angler farther forward.

Other fishy perks include both fresh and raw water washdowns, cockpit coaming bolsters, two in-deck fishboxes, and four flush gunwale rod holders with the option to add another pair plus a rack of six rocket launchers to both the hardtop and the transom. 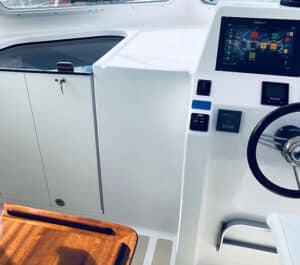 The North Coast is available with twins ranging from 400 to 600 total horsepower, the max being a pair of Yamaha F300 V-6 4.2-liter four strokes.

If you’re not terribly concerned about performance any of the packages will get the job done, but who doesn’t like the option to firewall those throttles and hit speeds in excess of 55 mph? Plus, you can cruise with the twin 300s in the low 40s at 4500 rpm. And at that speed, you’ll see a rather nice 1.4 mpg. Note that this means the boat has some very long legs—with 240 gallons in the belly, allowing for a 10-percent reserve your range is over 300 miles. Nice.

Does a pilothouse boat give you 360-degree fishability? No. Does it allow you to move forward and cast from the bow with ease? Uh-uh. But if you want to be able to go fishing come rain, sleet, or snow, and details like extra sleeping and tackle stowage capacity appeal to you, then the North Coast 285 deserves your attention.