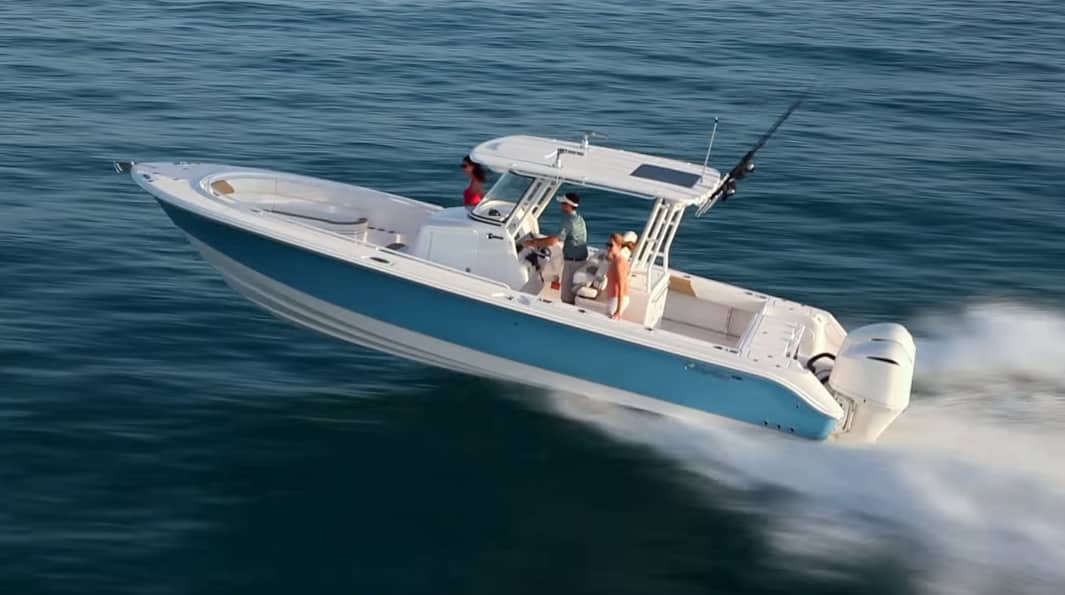 The Edgewater 320 CC strikes a balance between technology, raw power, and smart design.

Check out our article Best Center Console Fishing boats – 10 Traits to Consider, and you’ll notice that the top three items we list are boat construction, hull design, and size and weight. It’s no coincidence that these also happen to be key factors you’ll want to consider when checking out the Edgewater 320 CC. Edgewater has been at the forefront of construction and technical advancements in boat building since its inception, and continues to push for new advancements in each and every model they build. That’s why prior to looking at details specific to the Edgewater 320 CC, you’ve got to understand what their term “SPI” is all about.

Maximizing strength while minimizing weight is the ultimate goal of most boat builders, and that means finding the ideal resin-to-fiberglass ratio. Too little resin reduces strength, and too much adds weight without adding any additional strength. But finding this ideal is easier said than done, since most boats are hand-laid and the resin is more or less glopped onto the fiberglass and then manually spread around.

Not so, with an Edgewater boats. SPI stands for Single Piece Infusion. Let’s focus on the “I,” for infusion, at first. In the infusion process, the fiberglass is put in place then bagged with air-tight plastic. Tubes leading to the plastic then feed resin in as a vacuum draws it through the fiberglass, and then sucks away the excess.

That gets you the optimal resin-to-glass ratio, and it’s a great way to build a fiberglass part. In fact, many builders use infusion to form a boat’s pieces and parts, if not the hull itself. But in this case, you also have to account for the “SP” part of this equation. Prior to infusion taking place the foam composite stringers, bulkheads, and other structural parts are put in. So when the infusion occurs, all the pieces-parts are already assembled. The net result? Rather than forming and then later tabbing in the major components, or chemically or mechanically adhering them to the hull, when the resin dries the entire structure is one single, solid piece. The stringers, for example, aren’t glued to the hull but are actually a part of it.

As an angler, naturally, what we really care about is getting to the fish quickly and in minimal pain. At either end of the extreme this leaves us with two choices: you can buy a heavy-duty pig and zone out for two hours as you cruise for the canyons, or you can get a rocket-ship and arrive at the fishing grounds in 45 minutes with a compressed spine. Pick your poison. Or, pick a boat that’s built like the Edgewater – and also incorporates a variable-degree deadrise hull that has a sharp V at the bow and tapers down moving towards the transom – and get the best of both worlds.

No, we aren’t saying this boat has a perfect ride, nor would we say that of any boat on the water. In this case the down-side is exactly the same as it is with any boat that minimize weight: at high speeds, when you launch off a big wave less weight means you’re more likely to catch air and then suffer through a re-entry. Note, however, that on a boat of this size that’s much less of an issue than it is with 20-something foot boats which weigh a whole lot less and launch a whole lot more. And this issue can also be mitigated by any competent captain who’s paying attention and working the throttles.

Just how rocket-like is the 320CC? With a pair of Yamaha V6 4.2 liter four stroke F300 outboards on the transom, top-end hits 57 mph and at a 4500 rpm cruise you’ll be running at 42.5 mph. What’s even more surprising is that at this cruise, the boat makes 1.4 mpg. We’ve run plenty of boats with less LOA and the same amount of horsepower which topped out in the upper 40s and struggled to get 1.0 mph at a cruise in the low 40s. But don’t take our word for it. Check out Yamaha’s Performance Reports, which we’ve found reliably post numbers within a few percentage points of the performance data we gather on our own, and look at the numbers for a range of 30 to 32-foot center consoles with twin F300s – it’ll be an eye-opening experience.

Excellent construction and performance are great, but you can find plenty of center consoles that run awesome, yet fail miserably when it comes to fishability. One indication of how seriously a boat takes its fishing is livewell capacity. On a 32-foot center console, you’d expect to find a well like the 28-gallon one in the Edgewater’s transom. And you might expect to find a fishbox in the transom, too, like the 66-gallon box found here. What you might not expect is that Edgewater also plumbs the big box (though with a stand-pipe; we’d prefer an overflow on the side) so if you have a need for serious bait-hauling capacity, you have a useable livewell capacity with a grand total of 94-gallons. And if that’s still not enough for your taste, you can opt for another 60-gallons in the leaning post.

Other fishing features include closing rod boxes so you can avoid giving your rigs a salt bath on the way out and back, six gunwale mount rodholders and six rocket launchers on the hard top, stainless-steel toe-rails in the cockpit, a rigging station and tackle stowage in the leaning post, and a tuna-swallowing 155-gallon fishbox in the foredeck. As for the bow arrangement, U-shaped forward seating can double as casting territory if you leave the cushions and the center filler at home in the garage (where they belong).

The bottom line: Edgewater 320 CC is a top-shelf center console (and will command a top-shelf price, in the neighborhood of a quarter-mil), with excellent fishability. It does have some niceties you may or may not need like a finely-finished console head compartment, that bow sunpad, and a folding transom bench seat. But along with all that it offers a rare level of construction and performance, in SPIcific. 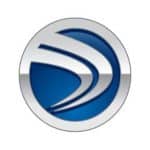 Check out the Edgewater Boats website for more info or get more great boat reviews from Lenny Rudow on BD.