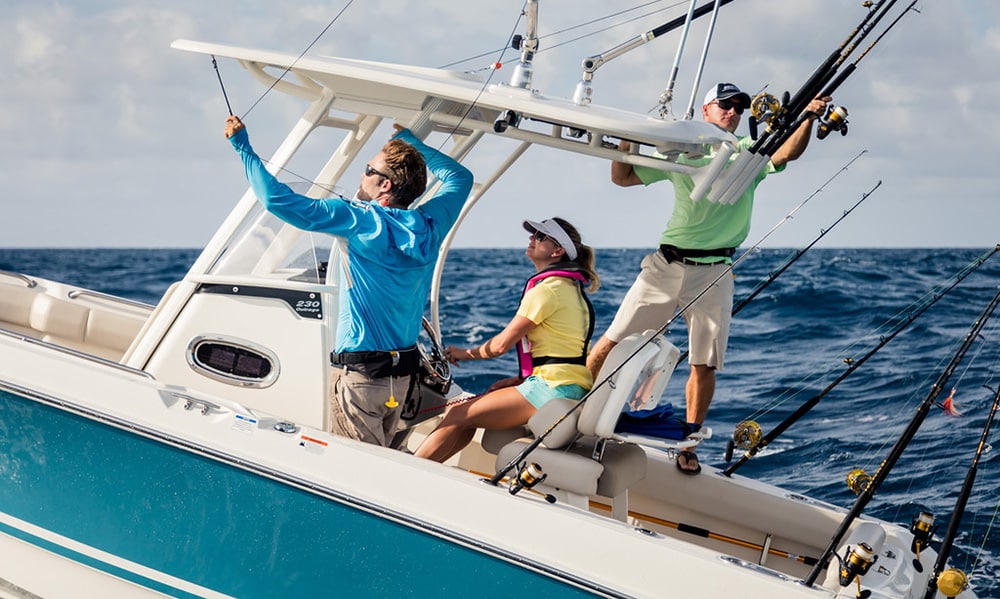 The best center console fishing boats share a few prerequisite qualities like rugged construction, good seakeeping abilities, and strong performance – all of which will be found in the Boston Whaler 230 Outrage.

Unfortunately, fishing boats also commonly share a few intrinsic inconveniences, like Spartan seating and a tendency to devalue faster than a Ming vase in mid-air – neither of which are issues on the 230 Outrage.

The first and most important trait to know about the Boston Whaler 230 Outrage, and any Boston Whaler for that matter, is the fact that their famous claims of unsinkability are 100-percent accurate. Whaler builds a hull, then a second inner hull. The two are then mated and bolted together inside of a two-piece mold. Liquid polyurethane closed-cell foam gets pumped in between the hulls, where it then expands, heating to over 400 degrees as it solidifies and bonds to the fiberglass. Every square inch of air-space is filled, the hulls are chemically bonded into a single piece, and when all is said and done you could chop a Whaler’s hull into 100 different little pieces and they’d all still float.

It’s true, a Boston Whaler is unsinkable and really tough!

This construction method checks two of the above-mentioned prerequisite boxes: it’s certainly rugged, and it also gives the boat a boost when it comes to seakeeping abilities. Even when bashing into big green rollers you won’t feel the vibrations nor hear the creaks and groans that are common on boats built with less stout methods. Added bonus: the entire boat is insulated in a big way, so every molded-in stowage compartment can act as a cooler and the in-deck fishboxes hold ice far better than the norm.

Wait a sec – if Whaler’s construction method is so good, why doesn’t everyone build boats this way? The answer is quite simple: cost. This is a time-intensive, labor-intensive, material-intensive way to build, and the net result can be seen in the 230 Outrage’s base MSRP of $109,316 (at the time of this publication). That’s before you add any must-have options, like the fishing package (including coaming bolsters, fishbox pump-outs, a raw water washdown, and transom rodholders), a T-top with outriggers, and electronics, which will together push the price up around the 130K mark. The good news, however, is that Whalers don’t devalue like normal boats. Look at ads for other boats this size that are around five years old, and most are barely worth half of what someone paid for them. But that won’t be the case when you look at the resale value of a Boston Whaler.

Run For The Deep

We still haven’t addressed one remaining prerequisite quality: performance. Max power for the Boston Whaler 230 is a Mercury Verado 350, which is exactly what hung on the transom when we ran a 230 through the open Atlantic. That produced a cruising speed of around 35 mph at 4500 rpm, while burning 13 gph. Wide-open throttle hit 51.5 mph, while spinning 6100 rpm and chugging a hair over 31 gph.

That’s more than enough zip for most anglers, but more importantly, we were able to maintain a relatively comfortable 4500 rpm cruise despite the fact that there were enough two- to three-foot lumps rolling around to launch the boat now and again. You can feel the solidity of the boat’s structure underfoot when it comes down off a wave, and in imperfect conditions that will have the captains of many 23-footers pulling the throttles back 1000 or so rpm, you’ll leave them right where they belong.

Once you get where you’re going, you’ll find all the usual required fishing accouterments present and accounted for. There’s a 16-gallon livewell in the transom which can be complemented by a 30-gallon well if you upgrade the leaning post, rodracks are under the gunwales, four rocket launchers grace the hard top, and there are vertical racks for four more rods in the bow. The bow racks are plastic; we wish they were stainless-steel but Whaler says that they hold up well and in surveys their customers are satisfied with them.

One more nice aspect to the 230 Outrage is that when you transition out of fishing mode, there’s plenty of relaxation space aboard. The bow’s U-shaped seating can be turned into a sunpad with an insert and cushion, and since the face of the console is slightly raked, the forward cooler seat allows you to lean back in comfort. Does that forward seating arrangement eat into your bow cockpit fishing space? Sure it does, but this is a fairly minor trade-off that most folks are more than willing to make – especially if you ever plan to take out the family. Added bonus: when you don’t need ‘em leave the bow cushions at home in the garage, and the forward seats function well as a raised casting deck.

Speaking of bringing the family aboard, yes, there is a head in the console. And of course, there’s also an option for a ski tow pylon. We’d caution against it and suggest using the tow-eyes for water-toy towing instead, though, because getting the pylon means eliminating those transom rod holders.

If you need a do-everything fishing machine that can handle chores ranging from chumming for mako sharks off the California coast to casting for tarpon in the Florida Keys and everything in-between, this could be your next boat. If you like spiffy performance matched up with comfy seating, again, the Boston Whaler 230 could be your next boat. And if you want a hull underfoot which is absolutely, positively, utterly unsinkable, well… you get the message.