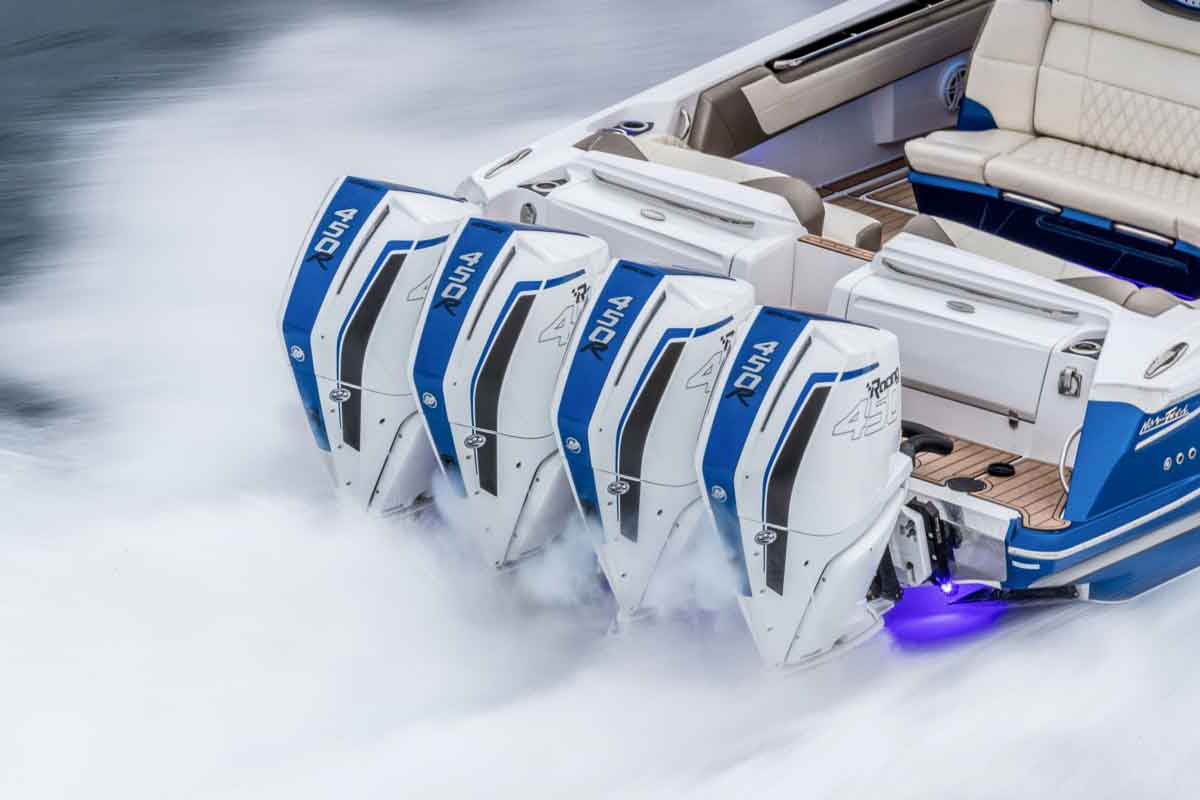 Do you want even more horsepower? Okay – you’ve got it, with the new Mercury Racing 450R.

When they announced the Mercury Verado 400 we were quite stoked, because, well, who wouldn’t want even more power in an outboard? But just in case you were wondering, no, 400 horses just wasn’t enough oomph for the folks at Mercury. As is usual, they left the initial power-boosting to the Mercury Racing department, which set aside the original 2.6 liter V-6 Verado block, picked up Merc’s newer FourStroke 4.6 liter V-8 concept and – no shocker here – added a supercharger. POOF! Gimmie another 50, please.

The uber-power comes from a belt-driven twin-screw supercharger, which is water-cooled. According to Mercury, this supercharger delivers zero-lag pressure for instant throttle response, and twin charge-air coolers increase intake air density; an electronic bypass valve can adjust for changing conditions.

The biggest surprise in checking out the engine’s specs comes when you look at its fuel constraints, or lack thereof – the 400R can run on 89-octane fuel, which will be a big relief to those who have been dealing with models demanding 91-octane fuel. Another pleasant surprise is the max RPM range, which is 5800 to 6400. Some other engines carrying the “R” designation spin up to 7000 rpm, which can be a bit worrisome when it comes to longevity. But here, again, we have another big and unexpected plus. Mercury Racing is giving the 450R a full three years of warranty, as opposed to the one-year version often applied to juiced powerheads. Nice.

While the 450R is sure to be used on high-performance boats, it’s also bound to get a lot of consideration from those running large but fast center console fishing boats.

Pushing the heavier loads of a fish-boat fully equipped for battle, the 5.44” Offshore HD gearcase will be the choice for most anglers. But it’s worth noting that the 450R can also be had with the Sport Master gearcase, intended for boats breaking the 85-mph mark.

Other features that will interest offshore anglers include a beefy 115-amp charging system, integrated electro-hydraulic steering, and shaft lengths available in a full range of 20”, 25”, and 30”. But there’s one more very important spec to consider, and that’s the weight. With the 30” shaft the 450R tips the scales at 715-pounds. That’s a whopping 237-pounds less than the Yamaha F425 XTO Offshore, and it earns the 450R a .629 power-to-weight ratio

The 450R is also available with a wide range of propellers, with choices including five-blade CNC cleavers and Max5, four-blade Revolution 4 XP and Bravo I FS and LT, and three-blade Enertia Eco XP. Other Mercury features like Digital Zero Effort controls, Joystick Piloting, and automatic Active Trim are also available. Exact pricing is tough to nail down here because of all the usual variables, but you should expect to see price tags in the $55,000 range.