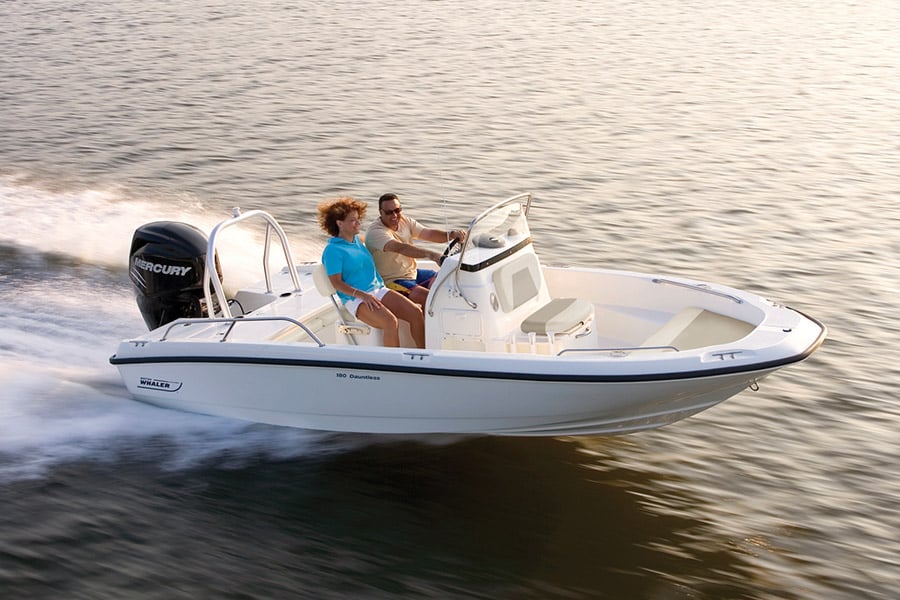 The Mercury 150 FourStroke is one of the most popular powerplants in Mercury’s lineup, and it’s easy to see why.

When the new V6 and V8 Mercury FourStroke outboard engines hit the market, they garnered the attention of the marine world. That’s a good thing, but it also overshadowed some of the other recent and arguably just as important developments in Mercury’s lineup. Yes, we’re talking about the 150 FourStroke. Although this powerplant has been around for some time, new models are substantially improved over the original and deserve a closer look.

The 150 is based on an inline, four-cylinder, 3.0-liter block that weighs in at 455 pounds. That’s slightly less than Yamaha’s 487-pound inline-four F150 outboard and is also less than other 150-horse competitors except for the new Evinrude G2 150 inline-three outboard (which weighs 433 pounds, max). It’s SmartCraft compatible, has computer-controlled multiport EFI, swings through a 1.92:1 gear ratio, comes in 20” and 25” shaft lengths, and has a 60-amp alternator.

One of the newer and more interesting features on the 150 FourStroke has little to do with the engine itself, and a lot to do with how you interact with it as the owner. Most of us who are going to run a 150-horse outboard will probably do a lot of the basic maintenance on our own. Recognizing this, Mercury came up with an interesting idea: they mounted a sticker under the cowl with a QR code on it. Snap a picture of the code with your phone, and it takes you to videos that show you how to do oil changes, swap out the spark plugs, and so on.

Another cool techy feature: since the 150 is SmartCraft Compatible, it’s also VesselView Mobile capable. That means you can pull up the VesselView app on your phone, connect via Bluetooth, and access your engine data. You can then use your phone more or less as an engine monitor, displaying rpm, fuel burn, temperature, battery voltage, and more. You can also use it to tap into the engine’s history and check on engine hours, see when your next maintenance check is necessary, keep a maintenance log, and if anything should go wrong can even display fault codes. Nifty.

Another interesting aspect of the 150 FourStroke and an important one considering the wide range of applications the engine is appropriate for is that it’s available with a number of steering systems. The expected hydraulic and mechanical cable options are on the table, of course, but tiller steering is available as well. And it can also be had with electro-hydraulic power steering in twin-engine applications (for which counter-rotating props are available).

The wide-ranging features and available functionality for this outboard will make it a good choice for those on either side of the aluminum boat versus fiberglass boat debate, in size ranges going from 17 or so feet in length up into the mid-20s. Considering its low weight and adaptability it’s also going to be a top contender for many boats in need of a re-power.

Finally, note that Active Trim is also applicable to the 150 FourStroke. Active Trim is a GPS/speed-based system that automatically adjusts engine trim to improve performance and fuel economy. It will change trim on its own as weight shifts and changes the boat’s attitude, speed changes, or the boat goes into turns. Yes, this is a cost-adding option, but it’s an available feature that those new to running a boat, in particular, may want to consider.

Just how much will a new 150 FourStroke cost you? Most of the time you’ll see this engine listing for a couple-few thousand over the $10K mark, but we see it quite a bit as part of the package on new boats of the appropriate size range, and these are usually relatively affordable packages. For instance, it’s the standard engine for a Mako 21 LTS ($39,995 including the trailer), the mid-range powerplant offered on the Lowe 22 Bay ($35,249 including the trailer), and the top power offering for a Bayliner Element F21 ($33,154). So while the big new Merc V6 and V8 FourStrokes might steal the limelight, let’s not forget about the 150 FourStroke – chances are you’ll be seeing a lot of them in the near future.