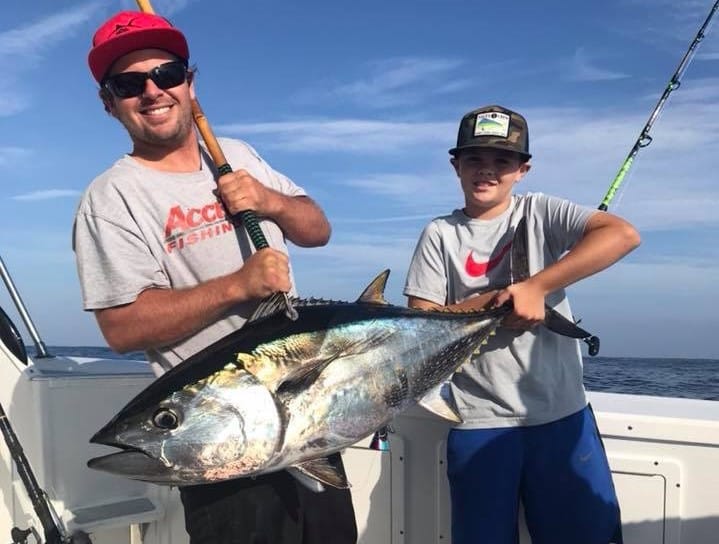 Editor’s Note: The full moon will help some and hinder others as it pulls on the ocean this weekend. Bluefin, yellowtail and seabass are liking it and could fire off the bite according to Erik Landesfeind. 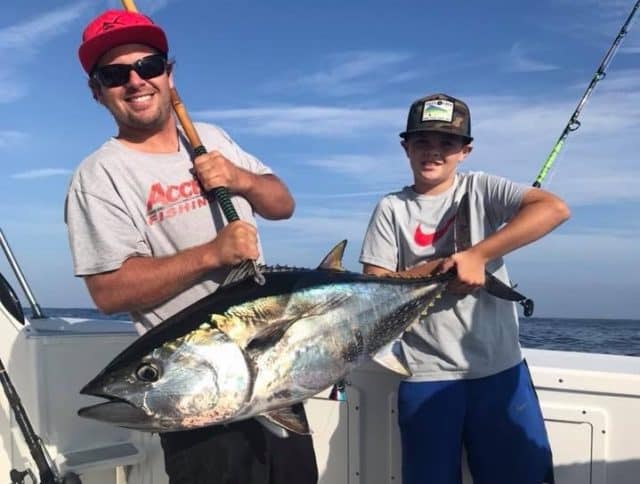 It’s been another good week of fishing in Southern California and while this week’s report sounds a lot like the last, change is coming in the form of tonight’s full moon. If you’ve been following recent reports you’ll know that the changes have already started. The bluefin that were parked on the Clemente Ridge for the better part of a month have moved on. Guys are chasing them around but reporting a lack of volume when they do find them. My guess is that these fish aren’t gone they’re just moving like they often do on the full moon. Who knows, they might pop up tomorrow on the beach or off Catalina Island.

Speaking of Catalina Island, if you read last week’s column, you saw the Fishdope chart I shared of my plans for Thursday afternoon. Well, my plan worked to an extent as I found fish, they just weren’t the size I was looking for. You can read the full report here, or just trust me that fighting a 175-200-pound bluefin on light tackle is not a fun way to spend an afternoon. One thing I didn’t share in my initial report was that those fish weren’t at the 43, they were just off the east end of Catalina Island.

While we lost all three fish we hooked, I would like to share the thought process that led to us finding the fish. As I was running the course that I showed on the map, I found several kelp paddies in a line just outside the 277. This line up of paddies indicated that there was likely some sort of current pushing them as they were not lined up in the direction of the wind. Just outside the paddies was a hard color break that went from purple water to milky blue. This indicated that there actually was a current break there, so I ran along it for a while.

While I was running I saw a swordfish boat working the dirty edge of the break. Shortly thereafter Matt spotted our first foamer and we were hooked up a few minutes after that. The water that these fish were in was green, cloudy and loaded with bait. The fish were working west fast and were around us the entire time in the mile plus that we moved when fighting the fish. Once we got to the clean water edge, the fish disappeared. The best part, we had them all to ourselves while everyone else was beating the 43 to death for tough fishing.

The moral of this story? If you run straight to the spot where the fish bit yesterday, you’re likely to drive right past the place where they might be biting today. Look around when you’re driving and focus on any color or temperature breaks as they indicate current that might aggregate bait. Don’t be afraid to run off course a bit to follow those breaks and remember there’s no rush as the gang bang at yesterday’s spot will still be there waiting for you. 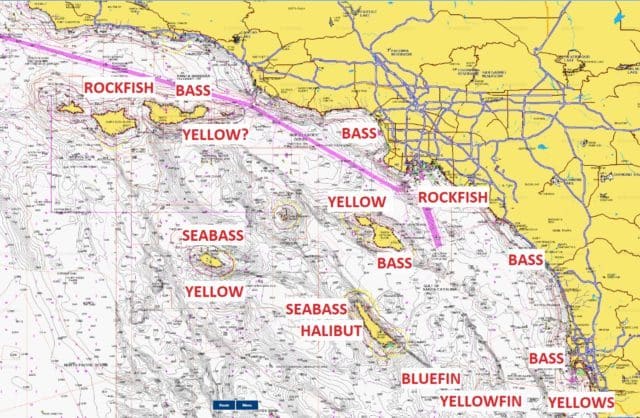 Enough about the tuna I didn’t manage to get into the boat, let’s take a look at this week’s Navionics Chart. Not much has changed around the Channel Islands this week. There are still some yellows and seabass being caught but rockfish and bass continue to lead the action. Hopefully tonight’s full moon will change things for the better. 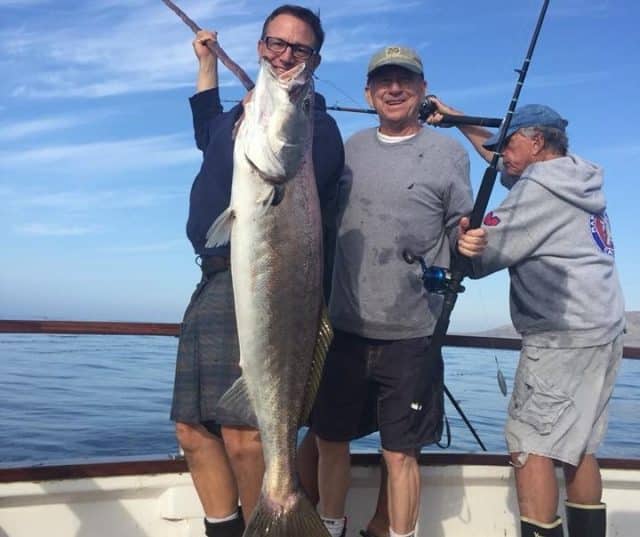 The full moon had the seabass biting for the Fortune out of 22nd Street Landing on Wednesday and the boat tallied three fish limits for the passengers and crew. The island in the back of the photo doesn’t look like San Clemente so I’ll leave it up to you to guess where they’re fishing. Better yet, buy a ticket and fish with them sometime. Smaller scores of bigger seabass and yellows continue to come for boats fishing Clemente and both the Freedom out of 22nd Street and the Thunderbird out of Davey’s Locker have fish on deck as I write this on Thursday morning.

I had a buddy fish calicos at Clemente earlier this week and he reported the bite on the front side of the island being as good as it gets. If you’re planning a bass trip to the island be warned that the full moon can often have a negative effect on the bass bite. Bass are also biting at Catalina Island along with yellowtail. 3/4-day boats fishing the island this week have had scores in excess of 50 yellows on several occasions and report good fishing overall.

Fishing along the coast has been good but inshore guys should be warned that a big south swell has things mixed up. I fished Palos Verdes on Tuesday afternoon and the big swell was power washing all of the bird shit off the rocks and stripping the wall of kelp. The swell also had Fermin Canyon up-welling and the water along the lower peninsula was ice cold, rough and very dirty. Once I made it past Point Vincente I found glass conditions, good downhill current, clean 73-degree water and biting calico bass. 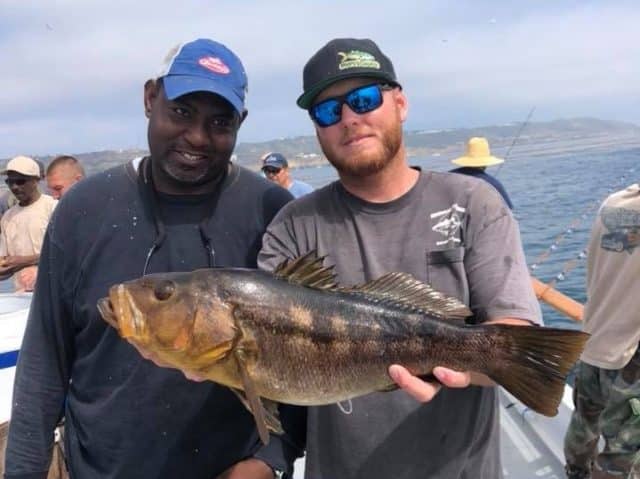 The calicos are also biting well for the 1/2-day boats fishing out of San Diego. This beautiful 7-pound fish was caught and released aboard the Dolphin Wednesday. There are also some small scattered schools of yellows all over the coast right now. We saw them at Rocky Point on Tuesday but they weren’t interested in our offerings. 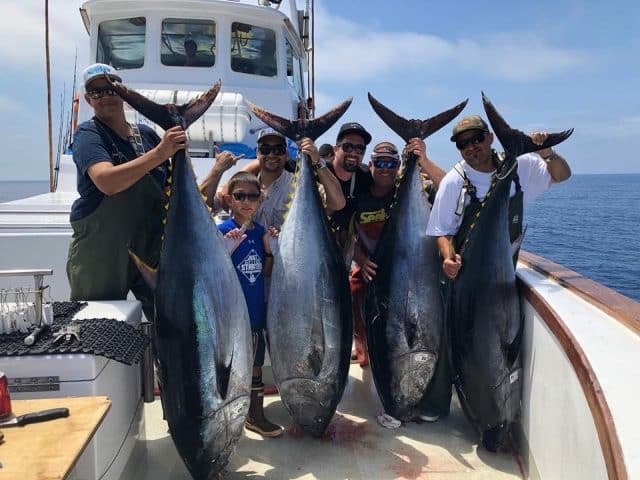 Big bluefin, like these caught aboard the Ranger 85 this week, are still biting for the boats putting their time in on them. Most of these bites are coming on the kite with a few coming on flat fall jigs in the dark. That is unless you’re fishing for small tuna at Catalina like I was, then they’ll biting anything you cast at them.

Anyway, for those not interested in giant tuna misery, there are smaller fish around to target like the one in the picture at the top of this column that was caught aboard the Sauerfish this week. There are also enough yellowfin tuna around that if they ever decide to bite it should be easy limits for everyone. There are also some big yellows being caught on kelp paddies along the inner banks off San Diego. Finally, I just heard the Pursuit out of 22nd Street Landing caught a dorado off a kelp on their way to Catalina this morning so that might expand your offshore options a bit this weekend.