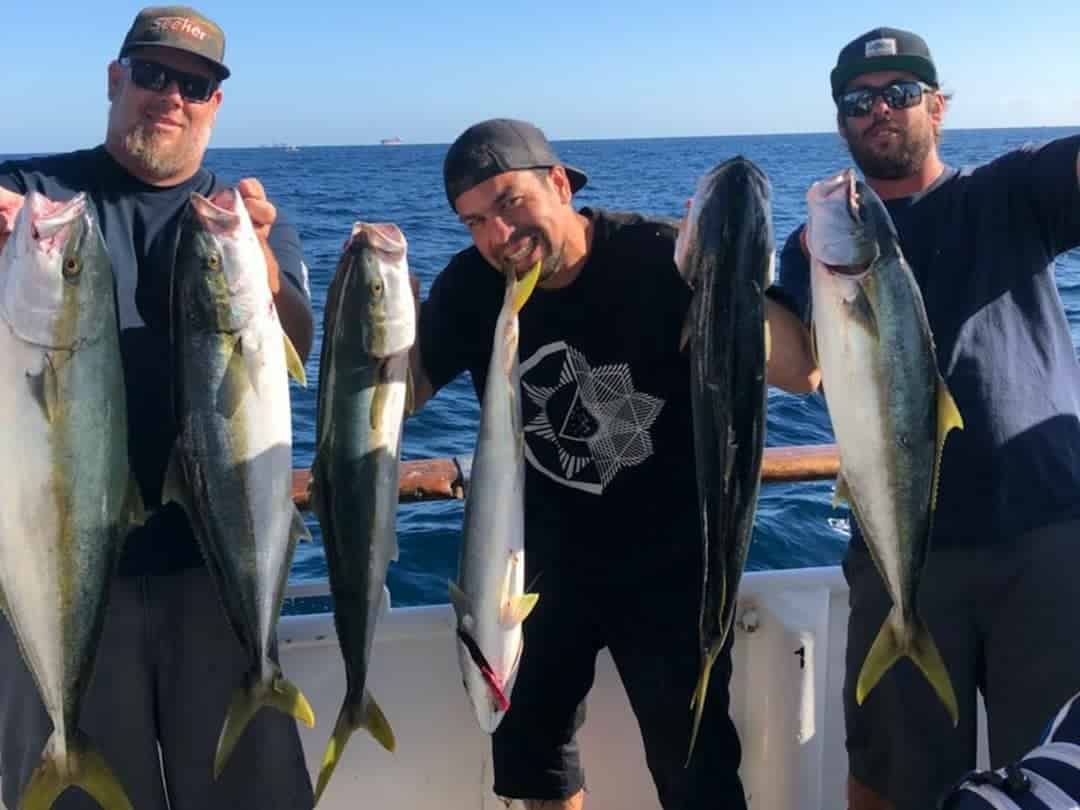 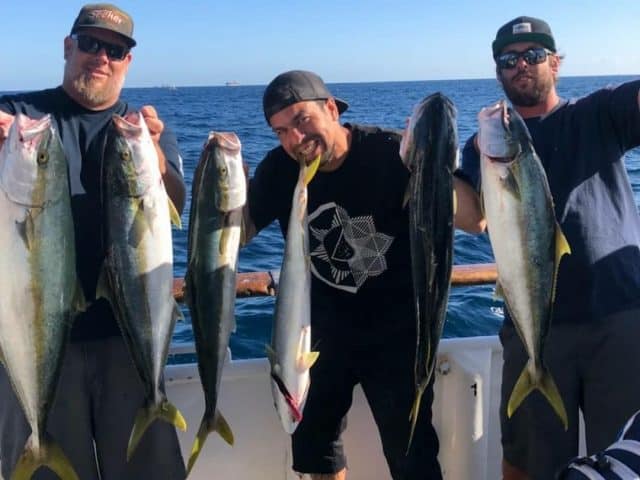 The big news this week is that the yellowtail are biting on the Horseshoe Kelp. On Wednesday, the 1/2 and 3/4-day boats out of Pierpoint Landing combined for 89 yellows for 35 anglers. The fish are averaging 10 to 15-pounds with the occasional 20-pound stand out and are being caught on live bait and surface iron. The bad news is that the bite’s proximity to the harbor, coupled with good weather in the forecast, will likely become a gang bang of epic proportions by this weekend.

If you’re absolutely dying to join in on what’s likely to be a big mess, I recommend heading out early enough to be there at dawn. That should give you at least an hour in the zone while the sportboats leave the dock, head to the receiver, bait up and make their way out. Once on the grounds, these boats will act as a homing beacon to the armada of personal space encroaching, chum line chopping, and completely clueless gang bangers that, “heard the yellowtail are running!” and are happy to drive around making everyone else miserable. My advice? Just avoid the whole fiasco. 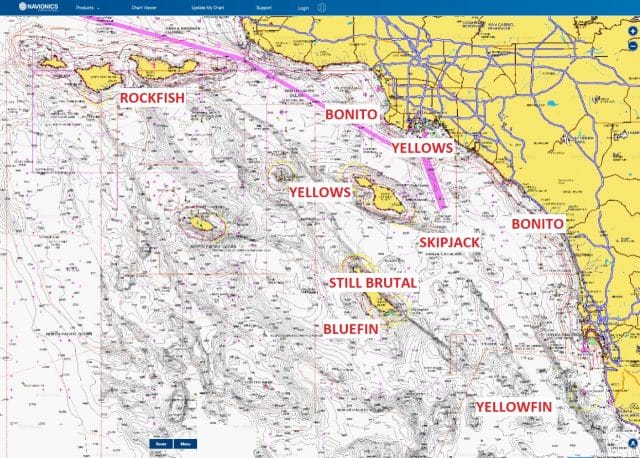 Let’s go to the Navionics Chart and check out our weekend fishing options. I know that I’m starting out of order, but I want to take a moment to talk about a trip I took on Saturday. After the previous week’s horrible day of bass fishing at San Clemente Island, I’m not sure if I hit my head or if I was just in shock at how horrible it was, but for some reason I though that it would be a good idea to go back there on Saturday. And guess what? The bass fishing sucked again! We didn’t even get a single bite in the hour we put in before pulling the plug. Not sure what’s going on but I guarantee that I won’t be going back there this weekend (probably).

Hoping to salvage our day, we ran out to the area where the bluefin tuna were biting on the backside of the island. There were sport boats scattered around over a couple miles and some of them had a fish or two hanging. We drove around for an hour looking for signs of fish but other than the occasional small tuna mark on the meter 80-90-feet down we didn’t see much. The birds were zero help because every one of them was working the sport boat chumlines. We did have a couple fish come up and boil around for a second but didn’t get bit on the one cast we had time for before they split. 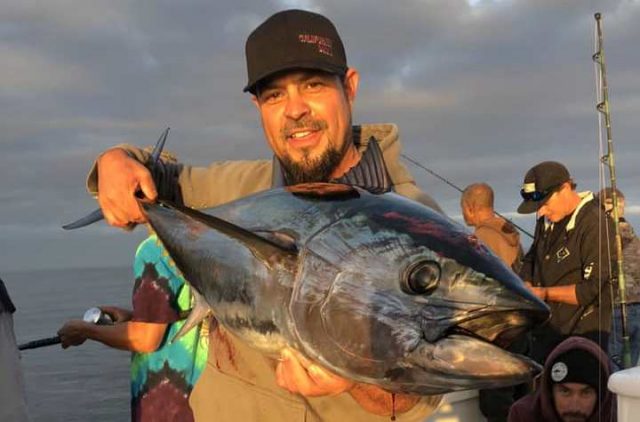 There is plenty of that 30 to 70-pound fish out there right now but they definitely aren’t private boat friendly. I guess you could probably catch them if you slow trolled mackerel around all day (especially with a down rigger) but I just don’t have that in me. We tried slow trolling and I think we made it 300-yards before I was ready to leave. If you want to get in on the bluefin bite, I recommend jumping on a sport boat. The fish are still biting at night so you’re better off doing a 2-day trip because you might miss the bite window on an overnight trip. Make sure and bring a heavy rod to fish the flat fall at night because there are still a few of the jumbos being caught each day. 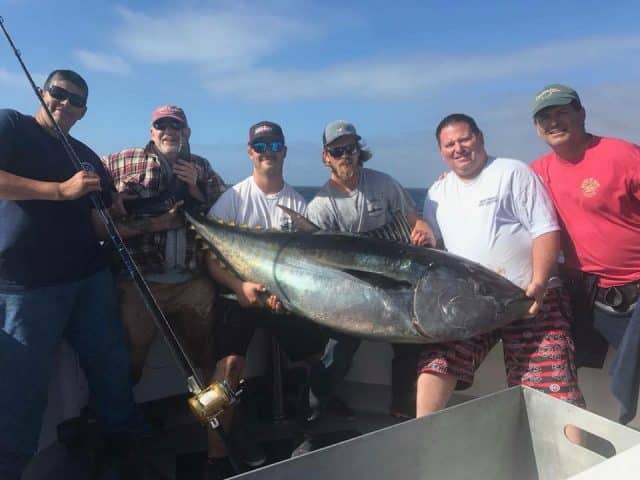 After striking out on bluefin we headed for the mackerel bank to see if we could find dolphin with yellowfin on them. On Friday several boats had limits in that zone so we thought we’d have a pretty good shot. We quickly found dolphin with tuna on them and spent quite a bit of time trying to get a bite but the fish never came within 50-feet of the surface. I’ve talked to a couple buddies about this in recent days and have come to the conclusion that if the tuna under the dolphin are going to bite they’ll usually do it right when you get on them. As a result, I’m going to set a 20 minute game clock on any non-biting tuna I find from now on. 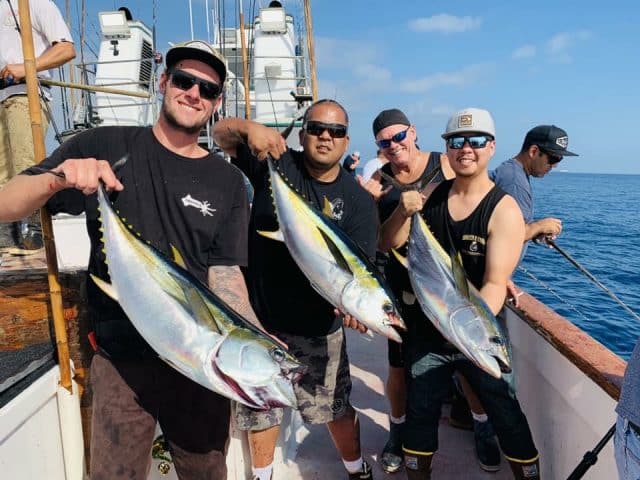