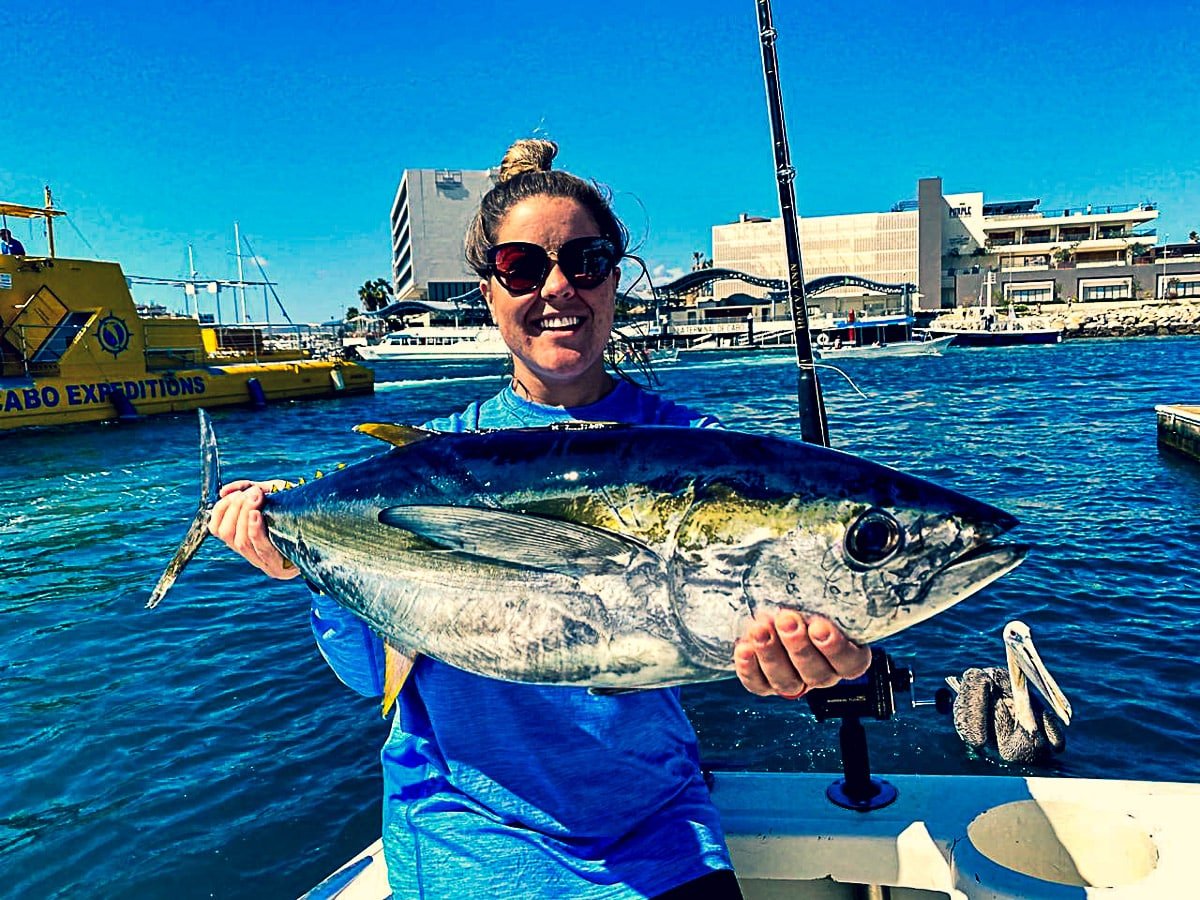 Bluefin happening in March seems to underscore a favorable 2020 season with prospects for the offshore fleet below the border despite the much-needed rain. Down at Lands End, yellowfin and marlin continue to evade anglers seeking some rod bending. Instead, they are getting reports of ear-bending politics as yet another year gets underway.

MONSTER YELLOWTAIL CAUGHT FROM THE BEACH!
We were out for a morning of chasing roosterfish and were pleasantly surprised to hook into this trophy-sized yellowtail…Wesley Brough‎, West-Coast Surf Fishing

The boats in this area see a lot of whitefish, and mostly little rockfish; however, there are not very many boats out. We did not receive any reports of birds, bait or surface fish.…fishdope.com

Yellowtail fishing remains slow with just one or two caught daily on the good days. These yellows are staying deep despite warmer water temps. Yoyo iron is accounting for all the yellows taken after locating schools on the sonar.
Although there was not much volume, some were found in the rockpile area yesterday – a couple of small schools were found in 175 feet of water.

The water down at the Pipe is green, and it is clean and blue up around the Islands. The temp is hovering around 62 and 63 degrees. The conditions are good enough for yellowtail to show up in big numbers. So stay tuned.
Be sure to fill out your DFG/customs declarations forms to bring rockfish back into the U.S. legally. These species are currently closed to fishing. Please note – even with these forms filled, you’re still not allowed to bring cow-cod or any other “no possession at any time” species back across the border… fishdope.com

Yesterday, some 40 to 100-pound bluefin were seen blowing up on micro-bait (anchovy), SW of the Coronado’s in the rockfish area by the San Diego as per Rick Maxa from Let’s Talk Hookup. The boat went zero for five. …fishdope.com

The tuna were up early in the day and were done by 9- to 10-a.m.
The boats found a few kelp in the afternoon for those yellowtail that were from 4- to 12-pounds.
They were willing to bite 40- to 50# fluorocarbon with 1/0 circle hook and a hot sardine! …fishdope.com 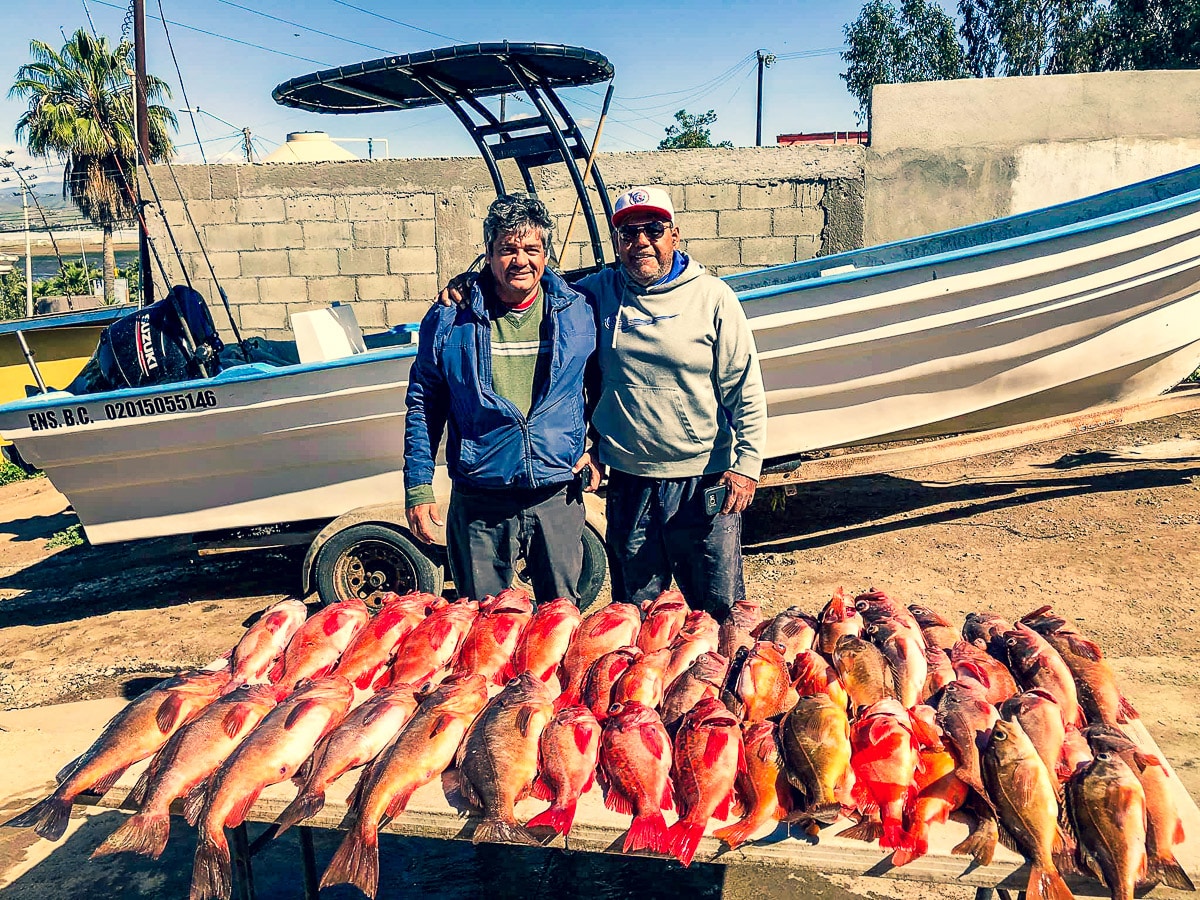 A picture tells the story; bottom fish limits were a sure thing. … Mara’s Sportfishing Ensenada

Our birthday whale camp extravaganza was extra special this year as some of my hometown “peeps” came to celebrate with me! Plus, Alicia Mascho AND Sirena Bondy were there too, so we whooped it up pretty good! The cake shaped like a whale’s tail was epic, and we managed a wee dance party! Thanks to everyone who made it so special…Shari Bondy, Whale Magic Tours, Shari Bondi

Fishing from plastic today with Mark Mizout of San Roque. He did great. I had fun catching calicos, and watching him hang two yellowtail – one 20 pounds and one 40-pounds – both on bass gear. There was one broken tip and one happy camper.…Daniel Powell

We are offering a special rate for friends and neighbors between June 1 – July 15, 2020. Details at https://www.theblackbasslodge.com/friends.html

My friend Joseph Zaragoza joined me at Gonzaga Bay for a couple of days of fly fishing. He and his friends, Chris and Tremor, fished their butts off on the 7th and 8th; it was kinda’ windy, so they called the trip and headed for Ensenada to do some fishing at Last Cast Sportfishing.

Another fishing venture for Joseph on the 7th, where we caught a halibut on the fly, some smallish leopard grouper, and barracuda.

Many thanks to Joseph of SALT JUNKIES INC and MagBay Lodge, in San Carlos, Magdalena Bay. Joseph set me up with a few T-shirts, hats, and hoodies! Muchas gracias, Josue! I’ll see you in Mag Bay in early Oct. …fishonnn my friend.… Juan Cook
Loreto

I was talking to one of our best fishing captains a few days ago, trying to get a handle on any changes or hot spots.

He, like most of the captains, has been touring around the whale watchers. In the middle of our conversation, I could sense a tear wanting to well up in his eyes. Yeah, lots of whales, tourists, and tips, but only limited contact with the real prey.
The story turned out to be another Coronado Island adventure. While cruising over to the beach for a whale watcher’s lunch, they came across a school of 20-pound class yellowtail slashing and slurping down 12-inch needlefish. Cabrilla were mixed in the frenzy, and judging from his arm gestures, the cabrilla were huge.

Aside from a good whale season coming at the usual time, this is a huge indicator of the impending spring bite in Loreto.
(The fishing results haven’t changed over the past few weeks – it’s still hit and miss – no solid action from the limited numbers of trips to the rock piles!)…Rick Hill, Pinchy Sportfishing

MEXICAN MINUTE LA PAZ FISHING REPORT from Tailhunter Sportfishing for Week of March 2-10, 2020
East Cape
“When the wind stops, the people who want to fish come out of the woodwork,” Eddie Dalmau, General Manager of Van Wormer Resorts noted at Fred Hall Sportsman Show in Long Beach. He continued that when that happened this year, the 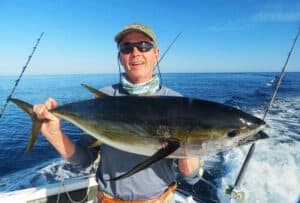 billfish, dorado, and a few surprise wahoo seemed to be out there just waiting for something to bite, much to the delight of the visitors.

Inshore the sierra is still kicking up a fuss chasing baitfish up and down the beaches. Rumors are that there have already been a few yellowtail showing up on the high spots outside of the La Ribera Marina. Adding to the excitement were reports of one group fishing from shore at the Las Arenas Lighthouse that scored dorado, sierra, and yellowfin.
It sounds like the trick is to check the flags in the morning, and if they are not flapping from the north wind, it’s time to go fishing.

Puerto Los Cabos
The weather has been mild, with more than usual cloud cover, and no rain; variable winds predominately from the north, but also switching unpredictably, and finally settling down. Water clarity is a bit up and down due to conditions. Also, ocean temperatures have cooled into the 68- to 70-degree range.
Bait suppliers were working harder to find available caballito, and they were also offering squid and ballyhoo. Local fleets have concentrated their efforts from Palmilla Point to Cardon, La Fortuna, and the Iman area. There are still opportunities now for yellowfin tuna, but the best chances were near La Fortuna while drift fishing with squid or using live caballito. Recently there was a 114-pound yellowfin tuna landed, as well as other tuna over 70 pounds, though the average yellowfin was more like 20 to 30 pounds. It’s an on and off again bite, depending on water temperature, currents, 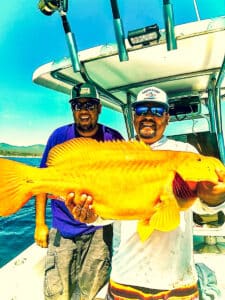 boat pressure, etc. No other areas were producing hot action, so the majority of all the daily charters were congregating on the same grounds, creating a pressure situation. Anglers were doing well to land a couple of these tuna.

Off the various rocky high spots, there are increased numbers of leopard grouper, Almaco jacks, and various snapper, although the action varied from day to day. Anglers were using yo-yo jigs, as well as any available bait. We also saw a golden- phase leopard grouper, a rare species. The Almaco jack averaged around 10 to 20-pounds, although a couple were over 50-pounds. Only very sporadic red crab activity was reported – currents need to be just right for them to drift to the surface where they can be scooped up with nets. There were more triggerfish than any other bottom species,
Every day, a few dorado were caught, most found near shore mid-morning, and averaged about 10 pounds. There were also a few wahoo caught.
Only limited action for roosterfish while trolling live bait; roosterfish were more active early in the morning on most days. A few sierra and jack crevalle were in the mix… Eric Brictson, Gordo Banks Pangas

MARLIN – At the beginning of the week, quite of few marlin were found at Old Lighthouse, then Golden Gate as well. Some were on the Pacific side between Los Arcos and Migriño. Mostly live and dead bait was used – mackerel and caballito.
TUNA – mostly caught at San Jaime and Golden Gate.
Cedar plugs and feathers.
Other – Cortez side close to Chilenos, Migrino and Golden Gate for yellowtail, snapper, and grouper. Fun catches and good sizes, caught while chumming mostly.
DORADO – Only five caught for the fleet on lures.
WEATHER: Overcast, between 70- and 75-degrees F, but the wind picked up midweek and into the weekend a bit, with winds reaching up to 13 knots. Water temp: 70- to 72-F. …Rebecca Ehrenberg, Pisces Sportfishing 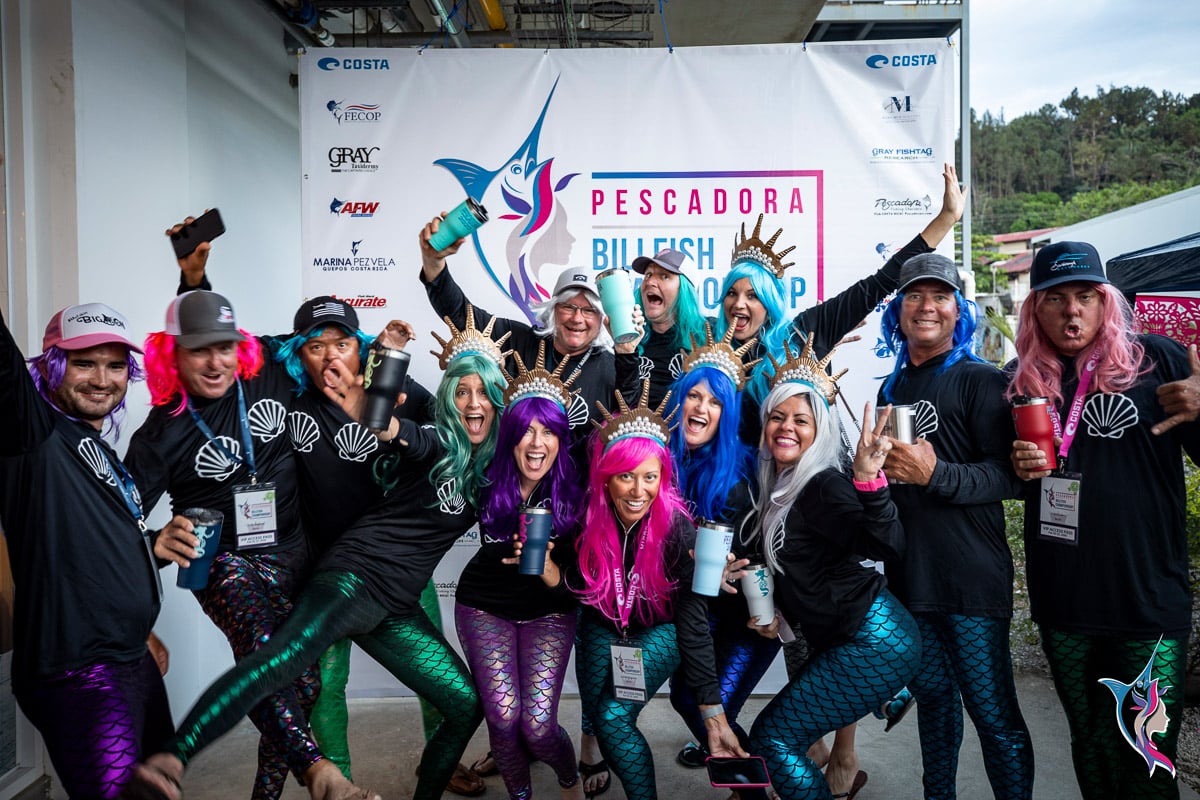 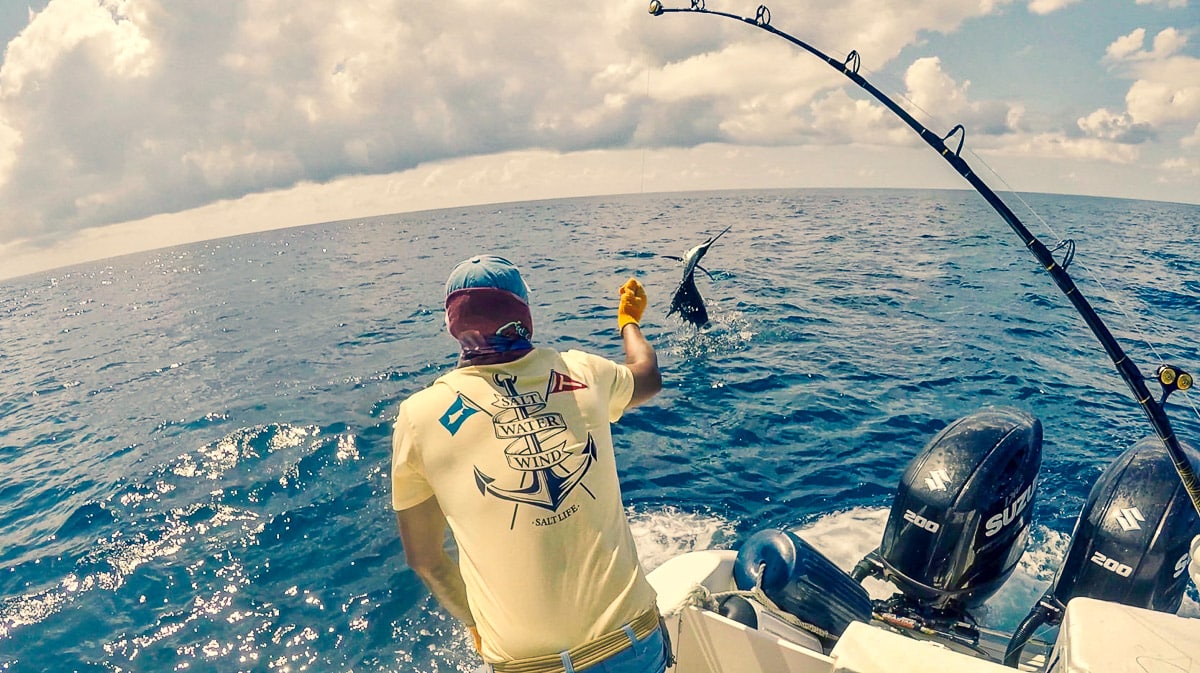