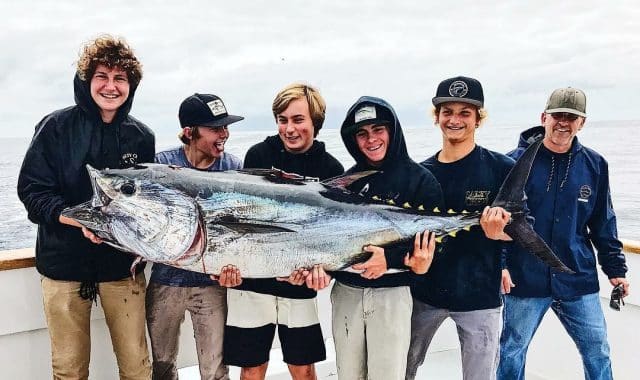 I know that it’s still early in the season but this pic, taken aboard the Liberty out of Fisherman’s Landing on Saturday, is my favorite photo of the year. It’s been a really long time since I was these kids’ age, but I still remember how enthusiastic I was about fishing at the time and how excited I was to see any tuna caught, much less a 140-pounder in 3/4-day range.  Early bluefin bite?

One thing is for sure, those smiles aren’t going to fade any time soon.

At some point, these big bluefin are going to swim away and likely not return for another 100 years, so don’t miss out by waiting for the counts to climb. If you do, you may find yourself on a crowded boat and “You should have been here yesterday” ringing in your ears. Don’t wait.

The day before this photo was taken, Captain Taro Takeuchi reported, “Mama said there would be days like this! We stopped on several nice kelps and had some fish jump around today, but none were eager to bite a hook. We got skunked! With improving weather conditions forecast, we’re hoping the fishing will improve as well!”

Although not everyone got bit, each person that showed up the next morning had the potential to catch the fish of a lifetime. 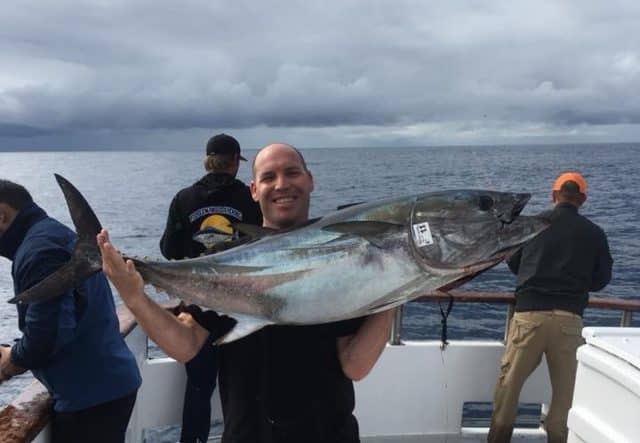 If you’re planning a trip to go out and fish these bluefin, you’re going to want to be prepared with both the proper tackle and mind set. The tackle is the easy part so let’s start there. Captain Taro recommends anglers bring the following; a 25-30# fly line setup, a 40-50# fly line setup and a 60-80# Shimano Flatfall setup. He also stressed that if you don’t have all of the necessary tackle you can rent it from the landing.

Now let’s talk mindset. You need to mentally prepare yourself for slow fishing and by slow I mean that you may only get one bite all day. That bite isn’t necessarily going to come first thing in the morning. Heck, it might not come until 5 seconds before the captain calls lines out for the day. That means that you’re going to need to maintain an athletic stance all day and stay mentally focused. 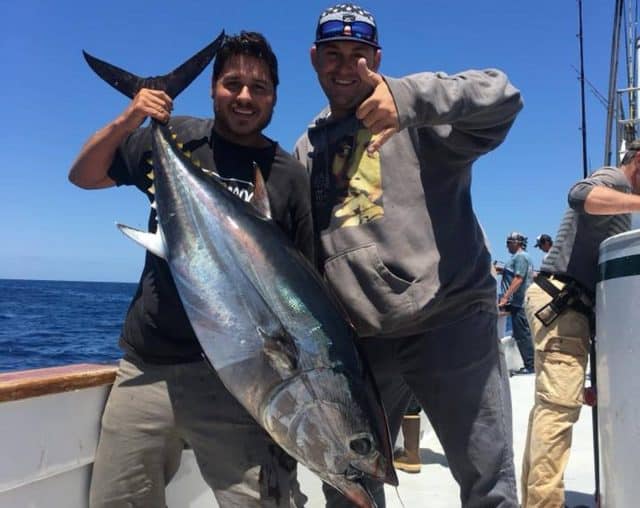 You want to get bit? Once you make it to the fishing grounds you will want to stand ready at the tank the entire time the boat is moving. You should have your eye on a particular sardine in the hand well and when the captain finds a school, calls for chum and pulls the boat out of gear, you should immediately pin that sardine through the nose and drop it back on the slide.

If you get bit that’s great! If you don’t you should wind that sardine in after no longer than one minute and then stand back while everyone rushes back to tangle each other up in the stern. Once the tanglers have followed their tangled lines up the rail and become long soak zombies, you should pin on another bait (preferably butt hooked) and return to fishing. If the fish are boiling off the stern, fish the upwind corner. If the long soakers are getting bit, fish that butt hooked bait off the bow and hope for a bluefin bite.

If you don’t get bit in two minutes, change your bait.

Finally, fish tackle that is appropriate to the size of the fish you’re seeing. When in doubt ask the crew. I know that it can be tempting to drop down to 30# when the big bluefin that are boiling around the boat won’t bite the heavy line but don’t do it. You’re most likely going to lose the fish and you’re going to waste a bunch of your fellow passenger’s fishing time. 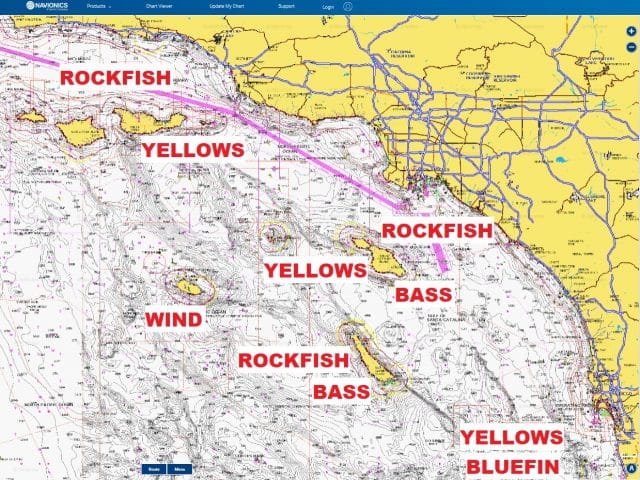 For those of you not interested in the bluefin bite, here’s this week’s Navionics Chart to tell you what’s biting. It’s going to be windy on the outside this weekend so Santa Rosa and San Nicholas look to be unfishable. There are plenty of rockfish and a few yellows biting at Santa Cruz island and the weather there looks decent for the weekend. Not much happening at San Clemente Island other than bass and rockfish right now and the wind is forecast to blow there so you might want to look at Catalina.

There have been some good scores on yellows there in the last week but there have also been some mediocre scores and complete misses, so keep that in mind. Live squid helps a lot and although no one has any for sale there at the time of this writing, they might by the weekend. My friends Jimmy Decker and Rob Kato fished the island without me over the weekend (due to my bad back) and had a good calico bite, with fish to 6-pounds, and hooked and lost one yellow on the surface iron.

The sport boats fishing the beach are mostly targeting rockfish but private boaters are catching both calico and sand bass along most of the coast. Spring is creeping along, despite all of the wind we’ve had lately, so I’d expect the coastal bite to improve. Finally, there are still some yellows biting at the Coronado Islands but the bigger scores are coming by way of kelp paddy fish. Good luck out there this weekend whether you chase the bluefin bite or something else!