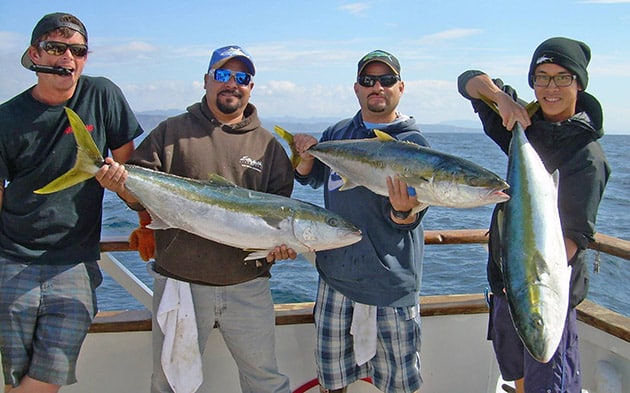 Well, it’s the first week of February and the yellowtail and bluefin tuna are still biting. How crazy is that? I’m sure that sooner or later a storm is going to come along and throw a wrench in the works, but in the meantime there’s plenty of fish to catch. So let’s take a look at what’s happening.

The Cortes Bank continues to produce lots of bluefin tuna for the boats making the run. The best trip so far was for 143 bluefin on the Tribute over the weekend. They went back out there during the week and had another 60 bluefin but caught 140 yellowtail to go with it. The Thunderbird out of Davey’s Locker was out there Wednesday and had a good score on the tuna as well.

Both the yellows and the tuna are a mixed grade of fish, comprised mostly of fish under 15-pounds. That being said there are fish up to 30-pounds in the mix, so you’ve got a shot at getting a few good ones. These fish continue to be line shy for the most part, so if you’re heading out remember to bring some light line and fluorocarbon leader. There are 1 ½-day trips on line at landings from LA to San Diego, so pick your favorite boat and get out there. In other 1 ½-day news, the boats fishing Colonett continue to load up on the big yellows. On a recent trip aboard the Eclipse BD’s Danny Lynch reported there being so many yellows around that the boat had trouble getting away from them to fish rockfish. If you’re heading down on one of these trips, make sure to bring some big yo-yo jigs like a Tady 4/0 or Salas 6X. With most of the San Diego 3/4-day boats doing their yearly maintenance, the Coronado Islands haven’t been getting much attention.

As of last week, there were plenty of smaller grade yellowtail and rockfish to be caught.

The Malihini out of H & M Landing is scheduled to start running again this weekend, so keep an eye out for their reports. This week’s full moon kicked the coastal yellowtail bite back into high gear. The New Seaforth out of Seaforth Landing had 60 yellowtail on Wednesday morning’s half-day trip. Private boaters are also getting in on the action with the guys who are willing to get away from the fleet getting the bigger scores.

As has been the case, there are fish scattered from San Diego all the way to the Santa Monica Bay, but the next high pressure area is Box Canyon. The Dana Point boats continue to scratch fish out of there while managing the occasional big score, all the while being assaulted by an armada of private boaters.

It remains my top pick of places to avoid in 2015. There is a tremendous amount of yellowtail outside of Long Beach but they are getting almost zero fishing pressure. Chris Oakes and I looked around out front on Saturday and marked multiple big schools of yellowtail both at the 150 and on the Horseshoe Kelp. Most of the fish we marked were more interested in eating red crabs than our jigs, but we eventually found some that were willing to cooperate. Those fish came out of a school we found chasing sardines on the surface. We both hooked up on our first cast with the surface iron and then watched fish blow out around us almost the entire time we fought our fish. I’ve had quite a few buddies fishing out there over the last couple weeks and they all report the same thing. Watch the birds, watch the meter and you’re going to find biting fish sooner or later. The best part is that when you do, you’re most likely to have the spot all to yourself.