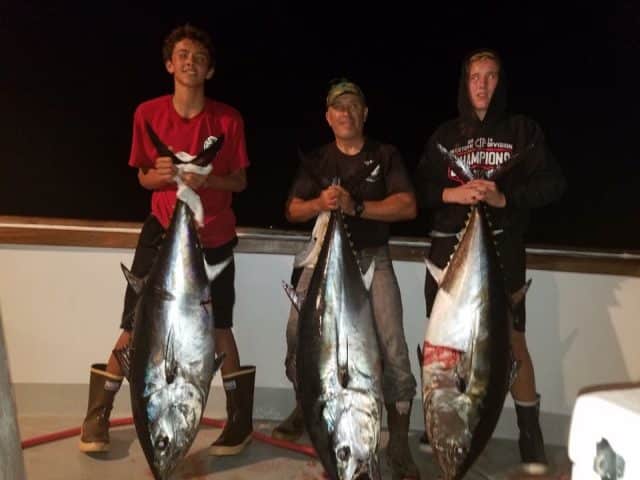 The outer waters saw a good amount of wind on Wednesday and as of the time of this writing on Thursday morning, there hasn’t been much news as to the effect it might have had on the fish. As of now, only one boat has reported in from the bluefin zone and they reported hanging a couple of fish. If recent wind events are any indication, I’d be willing to guess that the short period of wind we received will do much damage. So, keeping my fingers crossed that fish that have yet to be reported are bending rods right now, let’s take a look at what’s been biting in Southern California. 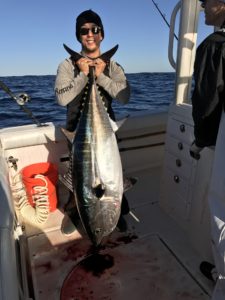 The bluefin tuna at Tanner Bank continue to be the big news and both sportboats and private boaters are getting in on the action. I’m hearing from lots of private boaters who are getting the urge to make the run, weather permitting, but I’d advise against it unless you’re an extremely experienced boater. In fact I was talking to Captain Gerry Mahieu yesterday and he mentioned that multiple people had asked about chartering his boat to take them out to the Tanner. He went on to say that he’d been turning them all down because the run is just too risky to make with clients in a center console boat. “You’re at least 35 miles from San Clemente, so if something goes wrong out there it’s going to be a long time before help can get to you” said Mahieu. “If I were heading out that far I’d have at least one other buddy boat but preferably two. I’ve heard guys say that it’s only a 3 hour ride each way, thinking it’s no big deal, but if something goes wrong that far offshore it becomes a big deal in a hurry”. 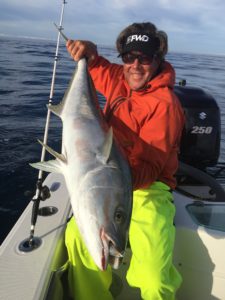 If you want to get out there without dealing with the crowds, I guarantee you that you could find a six-pack boat more than happy to take you and your friends at this time of year as a lot of them are sitting at the dock due to a lack of local fishing interest. Which ever way you choose to get out and try to catch one of these fish, know that live squid is the key to getting bit. I’ve heard that some of the sport boats from San Diego have been working with the LA County boats to get squid at the Tanner, but that situation may change if the bait gets harder to catch. Based on the bait situation, your best bet remains to go on a trip from LA or Orange County as they are able to stop at Catalina to make bait if needed on the way to the bank. Also, these tuna are often biting best early and late, so book at least a 1 1/2-day trip if possible.

The yellowtail bit really well this past week, but don’t let the counts fool you.

There have been some big yellowtail scores coming from the 3/4-day boats fishing Catalina Island in recent days. While catches of over 200 fish might be impressive, the overwhelming majority of these fish are very small. In fact, I recently saw a picture of ten yellowtail stuffed into a five-gallon bucket. If you’re a private boater looking to do some fun catch and release fishing, I’d head over the backside west end of Catalina and have at it. But if you’re a sportboat angler expecting good yellowtail fishing, I’d take a pass on these little guys. 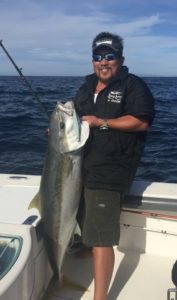 There are some bigger yellows biting at Catalina Island for the boats lucky enough to find the right fish, but the biggest yellowtail on the coast came from San Clemente Island over the weekend. I spoke with Captain Jimmy Decker who ran to the island to fish calicos on Saturday. While fishing a kelp line on the backside of the island Decker said he saw some bait getting chased and fired his Daiwa SP Minnow out into deep water. After a couple quick winds, he paused the bait and had a big yellow come out of nowhere and destroy it. This hook up resulted in a long and lopsided battle on a bass rod and Abu Garcia Revo Beast but eventually Decker managed to land the 30 plus-pound yellow that is pictured above. The fish came up again later and Decker’s clients got into them big time on the surface iron landing 6 out of 10 hook ups on fish from 30 to over 40-pounds. According to his client Rob Kato, the Tady 14 light was the hot jig on the big fish. 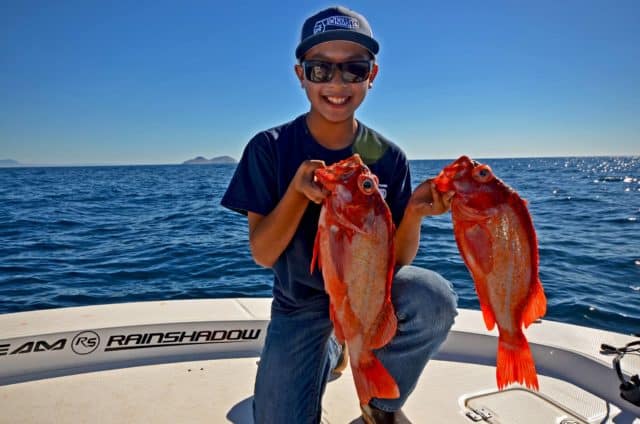 Finally, the rockfish bite continues to be good along much of our coast and at the islands. I fished the 9 Mile Bank on Friday and the fish were in the typical full moon pattern of biting well first thing in the morning and then shutting down until the afternoon tide. We were able to score some nice reds, like the two Logan Noguchi caught on the jig, early in 350-400 feet of water but the salmon grouper got to be a little too thick in the afternoon so we called it a day a few fish short of limits. With good weather forecast for the weekend, I think that most areas should be fishable, but remember that some of the islands got a lot of wind and might have some serious residual swell. I know that rockfish might not be as fun as yellowtail or tuna but remember the fishery closes at the end of December so you may want to do a freezer trip while the weather holds.