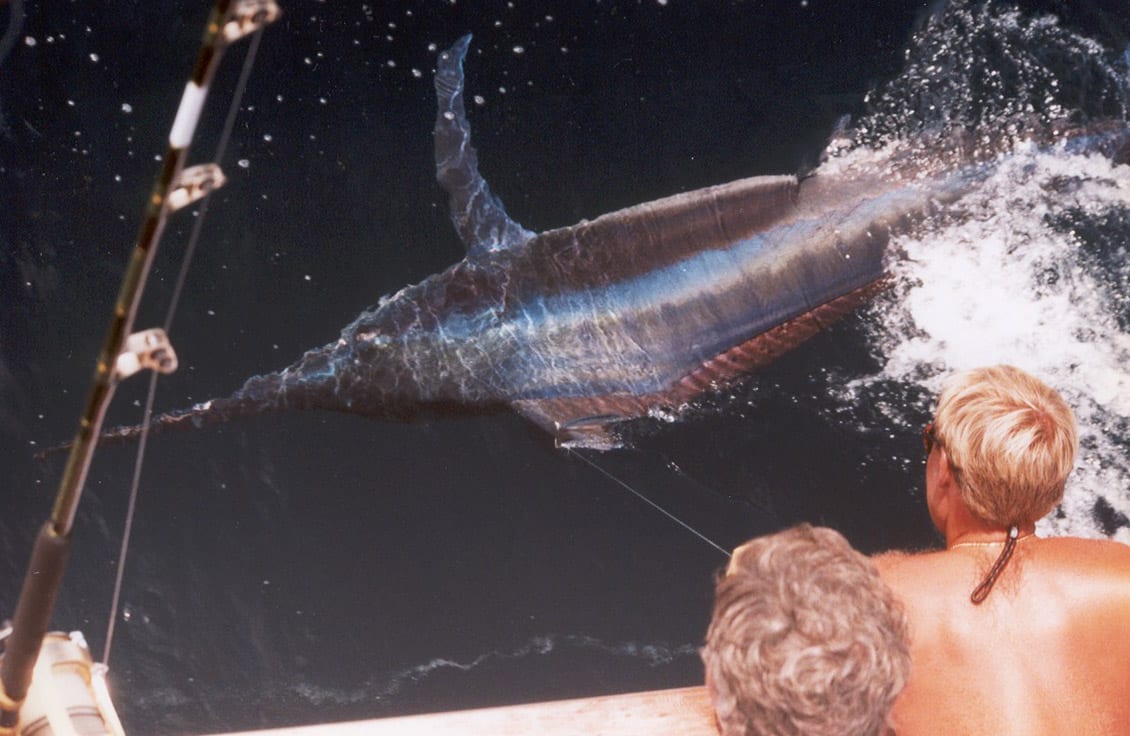 Jason Schratwieser of the IGFA shares some tips on how to ID a blue and black marlin.

This year’s marlin bite in southern California has been nothing short of insane. Not only are there a large number of fish being caught, but there are also a few BIG fish being caught. Whenever a big girl comes to the boat or dock in certain areas of the Pacific, there’s often the question of whether it’s a blue or a black marlin.

Distinguishing between the two species is the hardest marlin-call in the Pacific, but there are few ways that you can tell them apart. Most folks know that blacks and blues have pretty different pectoral fin morphology and behavior. Most notably, black marlin pectoral fins (in fish over 100-pounds or so) are unable to retract and this is a really informative characteristic. However, just because a fish’s fins don’t fold doesn’t mean they can’t fold, so you have to be careful about making a hasty decision boat side. Most of the time, when a blue marlin jumps, and especially when grey hounding, they will fold their pectoral fins so this is a good time to hazard a guess. Both species’ pectoral fins taper to a point, but black marlin are really, really sickle shaped and curve back towards the rear of the animal. Blue marlin really don’t have this characteristic. Sure their fins are pointed and curve a bit, but it’s nothing like a black’s. Blue and black marlin also have somewhat different overall body shapes. Blacks, regardless of size, have the appearance of carrying much more weight around the head and shoulders, while blue marlin seem to carry weight more uniformly through the body.

Black marlin bills appear a bit shorter and heaver- especially through the snout than a blue marlin. It’s a relative thing, but when you compare the two repeatedly, you get the picture.

The dorsal fin is a pretty informative character for these species. Black marlin have the lowest dorsal relative to size than all other marlins. A blue marlin’s dorsal, on the other hand, is significantly taller and comes to a very acute point. A black’s dorsal is also pointed but it often has the appearance of being more curved than pointed. Brancioste-what? Branchiostegals refer to the boney elements in the umbrella-like membrane on a marlin’s “throat” below the gill plates or operculum. A black marlin’s branchiostegals are much longer and reach farther back to the rear edge of the operculum than a blue marlin’s. This gives the appearance of a bigger head and, in addition to the thicker shoulders, makes a black marlin look like it’s got way more weight forward than aft.

Putting It All Together

Unfortunately, under most conditions, you have to rely on relative differences to distinguish between the two species. However, with practice, it’s completely doable and not that hard. And if you find yourself lucky enough to see one up close, with a good side view, the second dorsal/anal fin characteristic is a clincher.