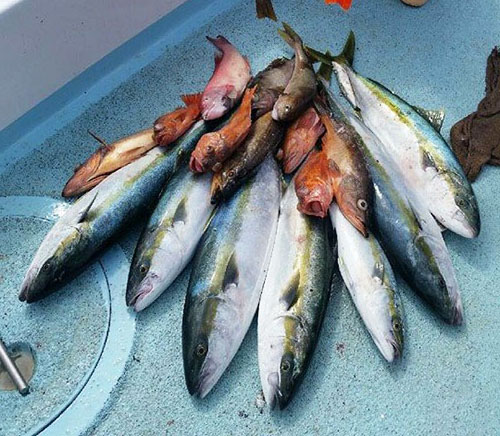 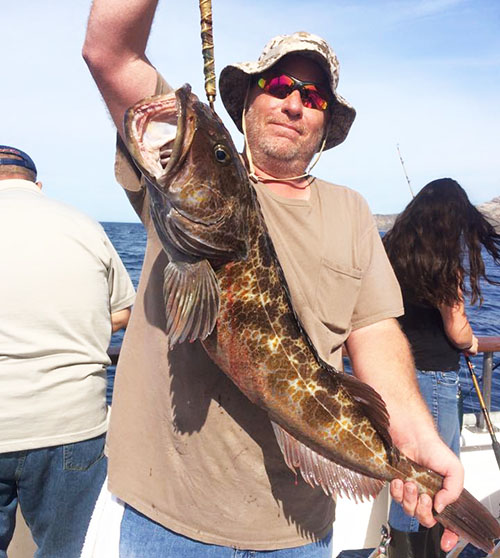 A weak front pushed through our area mid week but it wasn’t enough to keep the boats at the dock and it didn’t seem to put a damper on the fishing either. So, the unseasonably good fishing looks like it’s going to continue for at least another week. Add to that Friday night’s new moon and the yellowtail action might actually improve over the weekend. 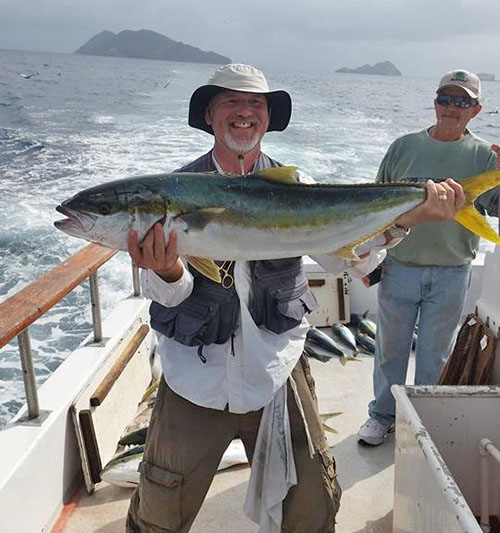 Speaking of yellowtail, let’s start this week’s coverage in San Diego where the fish have been on the bite.

The Coronado Islands are producing some of the best fishing along the coast right now and the 3/4-day boats out of San Diego landings have been loading up. On Wednesday, the Malihini out of H & M Landing had 66 yellows and the San Diego out of Seaforth Landing had 54. 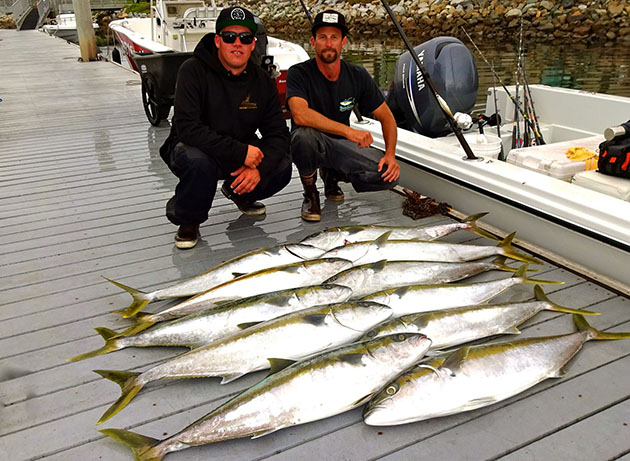 Most of these fish are still coming on the yo-yo iron, but they are starting to bite the surface iron as well. I spoke with Captain Duane Mellor of Seasons Sportfishing who has been fishing the islands daily and he reported that the big yellows came up solid in the afternoon. There were multiple schools up chasing bait on the surface and he was able to get easy limits on the surface iron. 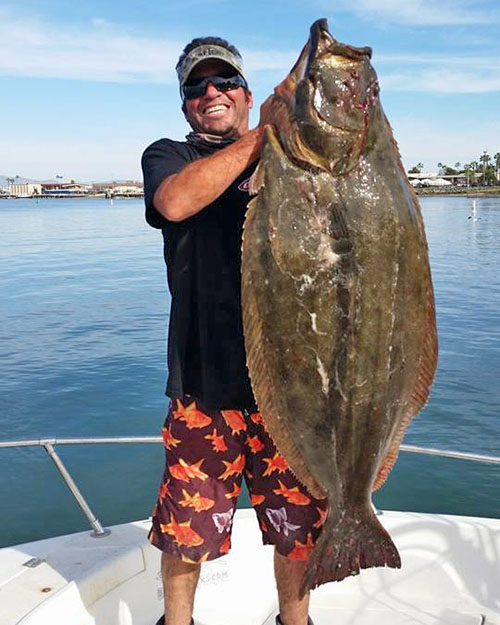 There are also a few yellows being caught by private boaters on the beach, but that bite has been more miss than hit. Cousins Tackle pro-staffer Thomas Aranda fished the beach north of La Jolla this week and caught his personal best halibut, a 48-pound fish. He also managed a small yellowtail and a handful of rockfish. Most of the yellows on the beach are still in deep water, but they could show up anywhere so keep an eye out for birds and meter marks.

Not too much excitement is happening along the coast between Oceanside and Ventura. Most of the boats are fishing rockfish and doing reasonably well. The private boaters who are fishing for them have been catching both calicos and sand bass all along the coast. I fished bass in San Diego on Saturday and at Palos Verdes on Sunday and the bass are actively biting high in the water column. So if you’re headed out, forget its March and fish like its May or June and you should catch fish. 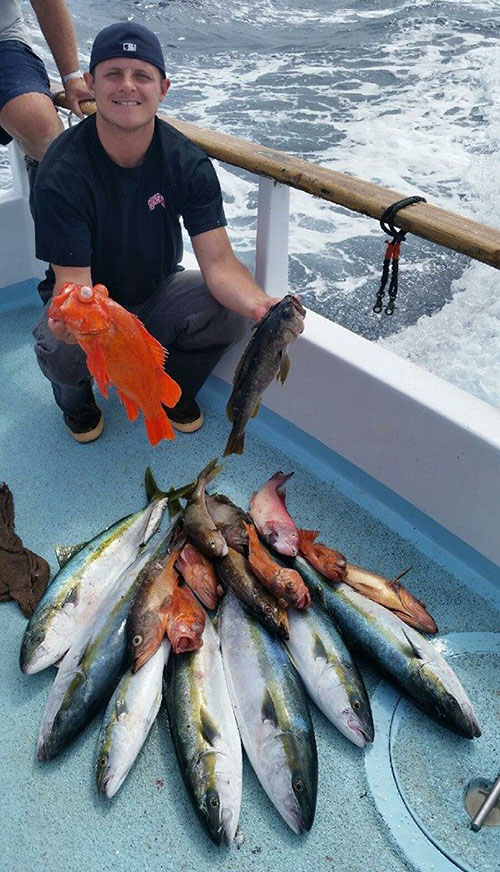 San Clemente Island has been the yellowtail hot spot for boats fishing out of Orange and LA County landings.

There have been fish biting on both ends of the island, which gives the boats some options if the navy closes one end or the other. These are still the same mixed fish that have been biting the last few months. There are lots of small ones, some medium sized fish and an occasional big one in the mix.

Sunday was the big day at Clemente this week, with several boats scoring over 100 fish. The bite has dropped off a bit since then, but it could come roaring back at any time.

This weekend’s new moon might just be the kick in the ass that bite needs to get going again.

If you’re interested in fishing San Clemente, just about every landing in the area is running trips, so jump on your favorite overnight boat and go fishing. The weather is forecast to be good at the island this weekend. 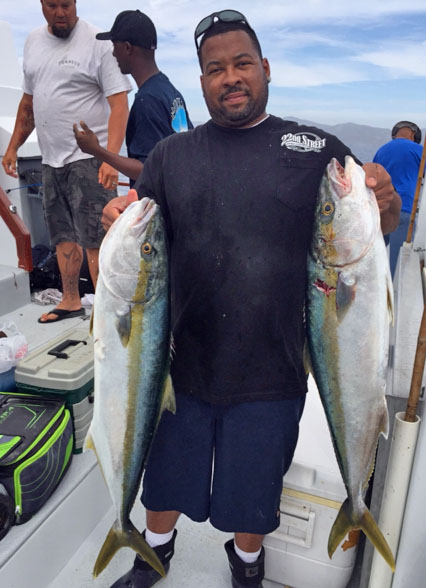 Catalina Island isn’t getting nearly the attention that Clemente is but it’s still kicking out yellows. The Pursuit out of 22nd Street Landing is fishing the island daily. They’ve been catching fish every trip, but the counts are only averaging a handful of fish a trip. There are some bigger fish along the backside of the island and if I were a private boater looking to target yellows this weekend, I’d start looking at the west end and work my way down to Farnsworth Bank looking for birds and meter marks. 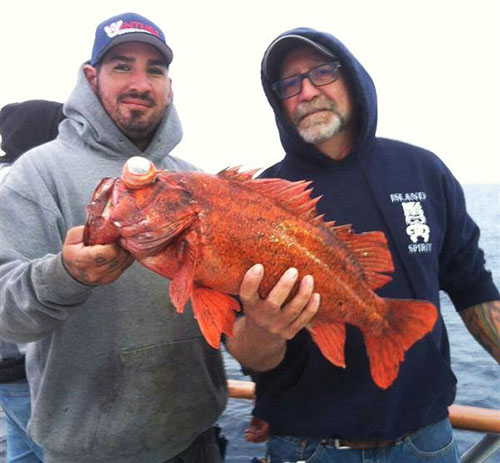 The rockfish bite at the Channel Islands continues to be excellent. 3/4-day and full day trips fishing Santa Cruz Island are scoring limits of quality rockfish on most trips. The best bite remains at Santa Rosa Island where overnight trips are regularly getting three fish limits of lings for their passengers. If you’re interested in an overnight trip, check out the newly renovated Amigo. Captain Bill Cavanaugh recently brought the boat to Ventura Sportfishing and will begin running trips this weekend.