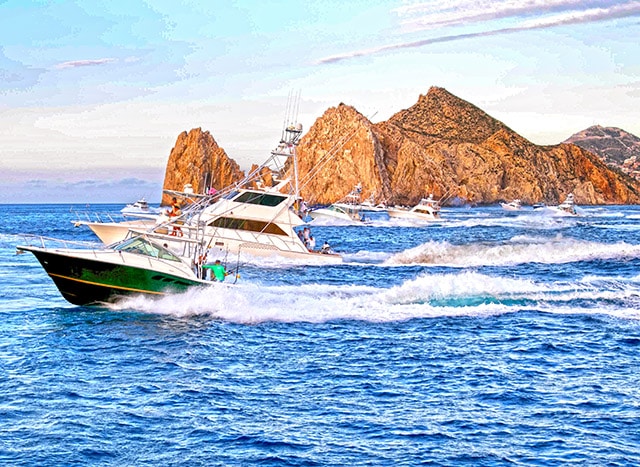 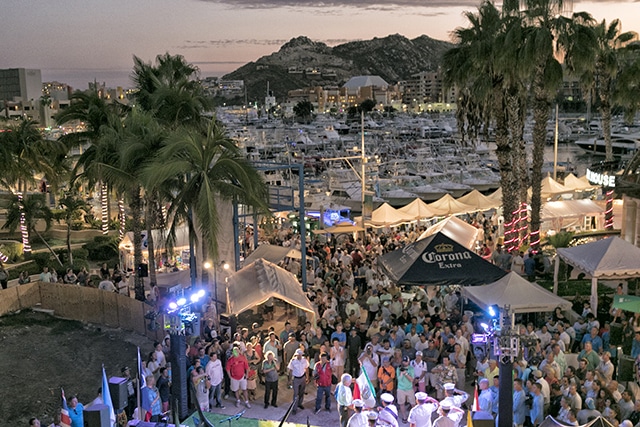 How do you describe the Bisbee Black & Blue Tournament in a few words?

“Some of the best teams in the world are assembled in one spot for the chance to earn more than $3.5 million dollars this year. We’ve been supporting this event for over a dozen years because of that and because of all the Bisbee family does for Cabo San Lucas. We wouldn’t miss it.”

One hundred twenty one teams were in line to register for the 36th Annual Black & Blue at Puerto Paraiso Mall on Oct. 18; many of them had previously competed in the Los Cabos Offshore only a few days earlier … a warm up for this event, the world’s richest sportfishing tournament.

Dan Lewis, owner of Sporty Game and a past champion, enjoys the camaraderie and 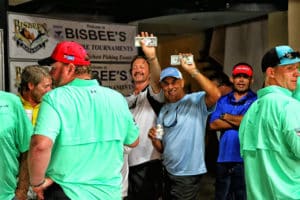 competition this tournament offers. “It’s the greatest,” he said. “There’s a lot of money on the line, so you have to do a good job of finding the fish. We were 100 yards away from Wild Hooker when they caught the winning fish in the Los Cabos Offshore.” 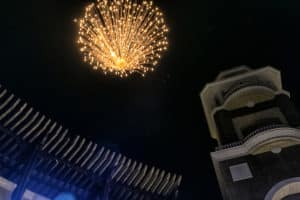 Captain Mike Hennessy, a former champion from Kona, Hawaii, is motivated for different reasons. “A lot of people come to the Black & Blue for the money. I come to beat the best teams in the world. There’s nothing more fun than a short-corner marlin bite and we’re going to kick their ass!”

This year’s Bisbee’s Black & Blue tournament began on Oct.19 with the 8 a.m. flare start off El Arco and the Cabo San Lucas Sportfishing version of “Do you want to be a millionaire.” 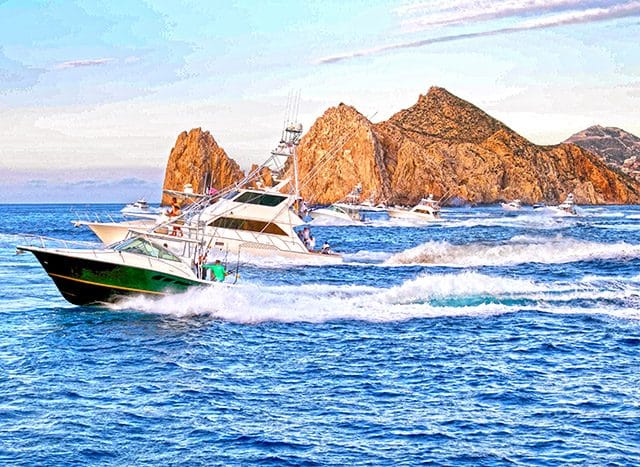 For those who have competed in or followed the event, it’s known for its high-stakes drama over the years. Many a winning fish has come to the scales on the last day – or in some instances last hour – throughout its 36-year history, so the scenario on the first day of fishing added a somewhat early twist.

Hooray reported a hook-up shortly before the 5 p.m. deadline for lines-out. The fish was boated after a brief battle and Hooray began the run from the Sea of Cortez back to the Cabo’s IGY marina. That set the stage for the ensuing theatrics.
With 121 boats vying for the $3.5 million-plus overall jackpot, the stakes were high; Hooray was entered in all the optional categories. No other blue or black marlin had been boated, despite steady reports of hook-ups all day long. So if Hooray’s fish exceeded the 300-pound minimum qualifying weight, it would be worth a cool $1.3 million.

The crowd waited for the sleek 80-foot Viking to back up to the IGY dock. The cart 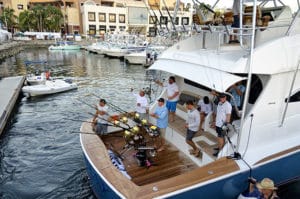 carrying the potential million-dollar fish wound through the gawking crowd. Angler Kenneth Padgett led the procession, his stout conventional bent-butt rod and reel in his good right hand. His left hand, broken and pinned, was in a blue cast, yet he had somehow cranked in the fish. Would his extraordinary effort pay off?

Weigh Master Jack Teschel zeroed the register and activated the scale.
Nearly everyone at the Puerto Paraiso Mall was holding his or her breath. The verdict was shouted out for all to hear, “Two-hundred-sixty-seven pounds!” It was close, but not close enough. Padgett stared at the long but skinny blue marlin in disbelief.
“I released another marlin and we lost two more, including one about 30 feet from the boat,” said team mate Mark Mitchell afterwards. “Those fish were hitting from 1 to 3 p.m. on that full moon. But we’re on ’em and we’re going to come back here and win tomorrow.”
Eighty-seven billfish were caught by the 121-boat fleet that day, including 62 blue marlin, three blacks, 20 striped marlin and two sailfish. El Suertudo led the Release Division with 900 points based on time. Last year’s champion Tranquilo, as well as Reel Quest had 900 points also, while seven boats tied with 600 points apiece.

The second day began with a steady stream of releases until the first fish was boated by past big money winner, Chip Wagner, fishing aboard Bob Patton’s Viking, Fastball. At 10:42 a.m. the 304-pound blue made it to the scales not long after they opened.

Because the boat was entered in the optional Chupacabra Division, that fish would have 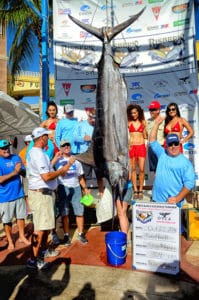 earned approximately $2.3 million if it was the sole daily qualifier. With Quiteña’s fish, however, it would only take two days’ worth of prize money in that optional $20,000 division. A $320,000 payout is still a nice day on the water.
“We were in the salon when we got a knockdown,” Wagner added after the fish was weighed. “I jumped in the chair with the 130. The fish ripped off a bunch of line and got tail-wrapped, but we got it in,” Patton added. “Because it was tail-wrapped, we didn’t have to gaff it, so that probably saved us a couple pounds.” Patton is part of the Guggenheim Baseball Management Group that owns the Los Angeles Dodgers, who were playing in the National League Championship Series against the Chicago Cubs. The Dodgers lost.

“This is definitely a team effort,” Patton said. “I wish my baseball team had won last night, but they’ll have to take care of business themselves. You can see where my priorities are.”

It wasn’t Julio Fernandez’ largest marlin or his personal best; however the black marlin he landed Thurs. morning in the Bisbee’s Black & Blue Marlin Jackpot Tournament – a fish worth close to $2 million dollars – will be his most memorable.

After a fight lasting about an hour, Fernandez and his veteran team aboard Quiteña, boated the 534-pound black marlin with Captain Rich Hamilton at the helm and Tommy Niekirk along with Marlin Parker in the cockpit. 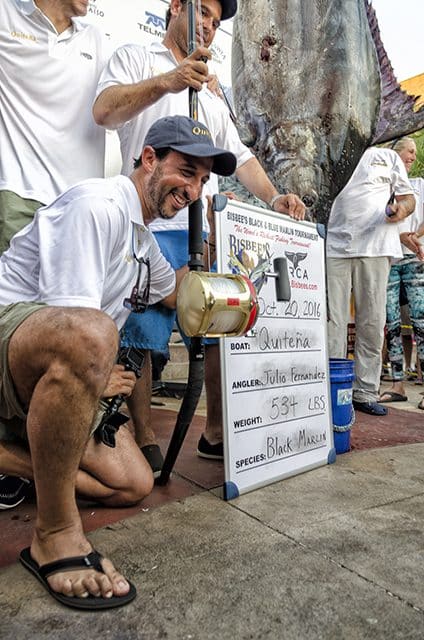 The team was entered across the board in all optional categories except the Chupacabra Challenge. So, with no qualifying fish the first day, the jackpots rolled over, earning Quiteña the biggest score yet for the 2016 contest.

Angler Gilles Asunsolo and his Mexico City family and buddy team aboard Drakkar, a 65-foot Hatteras, brought in the other qualifying fish on Thurs. The 349-pound blue was hooked on the Pacific side and landed after a 40-minute fight. Drakkar’s fish was fooled by a pink/silver Braid plunger lure.

Last year’s big winner, Tranquilo, continued to pull away from the pack in the Release Division. The Costa Rican team had 2,100 points, followed by El Suertudo with 1,200. Five boats tied with 900 points based on time.

The final day of the 2016 Black & Blue began with the Quiteña crew crossing their fingers that they could maintain their lead, while the remaining 120 teams brimmed with optimism.

When So Cal angler Russ Armstrong aboard C-Bandit hooked his fish, they were trolling a 12-pound yellowfin tuna near Vinorama right at noon. Even though it stayed down at first, Armstrong suspected it was a good-size fish. As he applied more 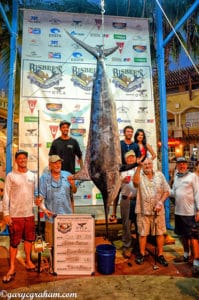 drag, the black came alive and started leaping out of the water 200 feet behind the transom. “As soon as it did, I told everyone it was a qualifier,” Armstrong added. “The fight took about an hour and because we knew it was well over the minimum, we decided to work our way back in. This was my first time fishing with this crew and they were exceptional.”

Owner, Bill McWethy, San Diego, was aware of a number of teams headed toward the scales. “Because of poor radio reception, I was in contact with a friend at the scale via cell phone who reported the weights of each fish as it arrived,” McWethy smiled. After the last team’s visit to the scale, they knew their fish’s weight would need to exceed 350-pounds.
After the qualifier was boated, C-Bandit’s fish, which registered 416 pounds, vaulted the team into second-place overall, trailing only Quiteña’s 534-pound black weighed on Thursday. 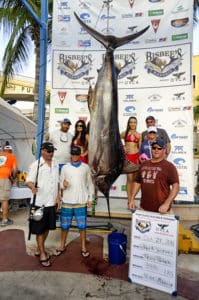 Team Five More Minutes’ angler Troy Patak wound in his 344-pound blue marlin after a 48-minute fight. It was exactly one year ago on the same day that the team weighed a money fish (356-pound blue) in the 2015 contest.
“We were all drowsing, it was so slow,” said Robert Hulsey, also from Southern California. “Everyone was awake in an instant when that fish hit; now everyone is happy, just like last year. Things happen for a reason.” 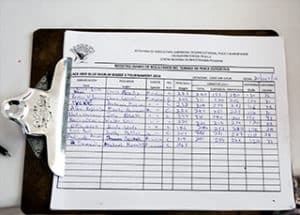 It was definitely a Friday bite as Axel Valdez of Tournament Control tried to keep track of all the hook-up reports. Scales coordinator Bert Merritt and Weigh Master Jack Teschel managed to keep things flowing smoothly as a parade of marlin was carted into position.
Nine other marlin were weighed on the last day, but all failed to meet the 300-pound minimum. 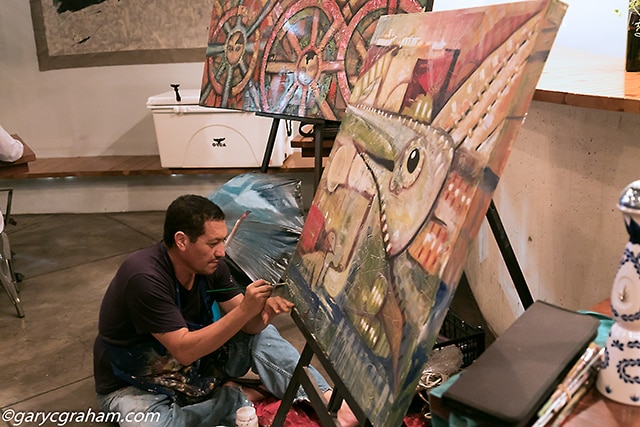 The awards ceremony got underway Sat. evening at the Puerto Paraiso Mall in downtown Cabo San Lucas with a cocktail party and silent auction at the Common Table Restaurant. 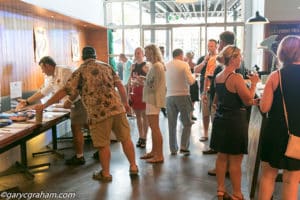 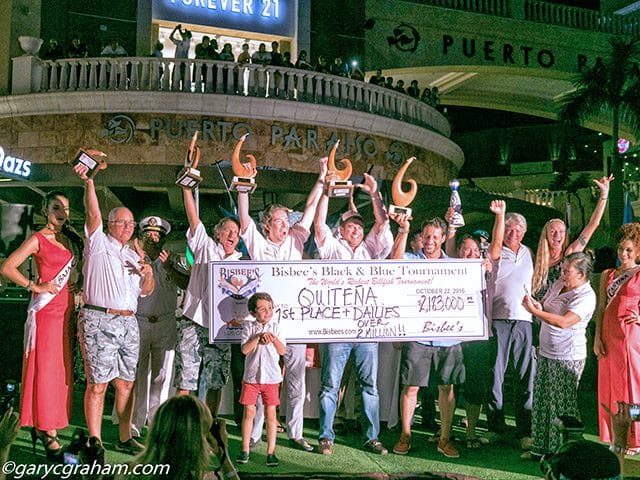 On the stage in front of the Puerto Paraiso Mall, Julio Fernandez and his Quiteña Team claimed the biggest share of the $3.5 million jackpot – a $2,183,000 payout. Fernandez is from Tampico, Mexico and Quiteña (62-foot Viking) is led by Captain Rich Hamilton and based in California. 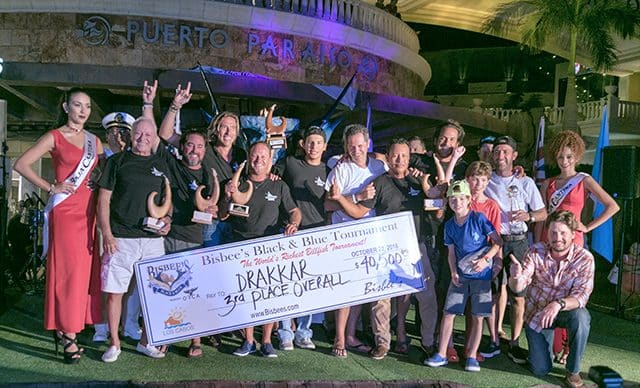 Gilles Asunsolo of Mexico City and his team scored big while fishing on Drakkar, a 65-foot Hatteras. His 349-pound blue marlin won a check for $40,500 for Third Place honors and various jackpots.

For the second year in a row, Team Five More Minutes made the trek to the awards stage, this time to pick up a $10,800 check for Fourth Place honors.

Fastball (82-foot Viking) owner Bobby Patton and his pal Chip Wagner combined to record a 304-pound blue, worth $487,200 as the Fifth Place tournament winner in the daily $20,000 Chupacabra Challenge division. This optional category had eight teams competing for the winner-take-all prize. 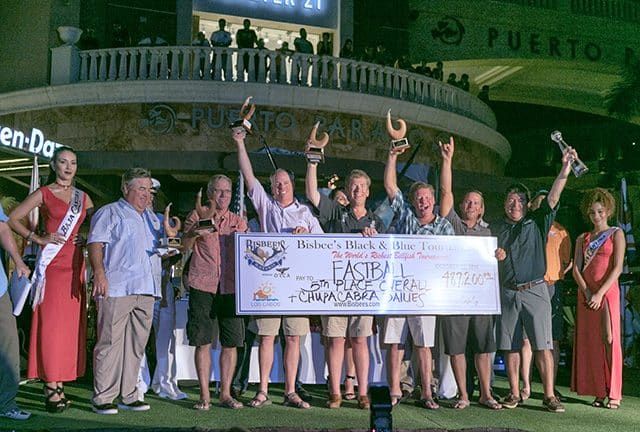 After the check was presented, Patton generously donated $10,000 each to the Los Cabos Children’s Foundation and the Bisbee’s Fish & Wildlife Conservation Fund. 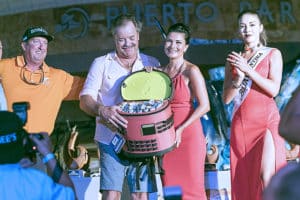 Chris Erickson of Cabo won the $10,000 Conservation Fund raffle (cash stuffed in an Orca Pod cooler), which he promptly donated to the Los Cabos Children’s Foundation as well. 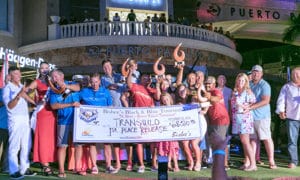 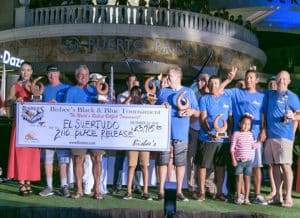 El Suertudo was the second-best release team ($23,715)
Followed by Team Bibi ($13,175) … blue and black marlin under 300-pounds, plus striped marlin and Pacific sailfish caught and successfully released, earned points based on time.

For the week, 234 billfish were caught by the 121-boat fleet, including 175 blue marlin, nine blacks, 56 stripers and three Pacific sailfish. 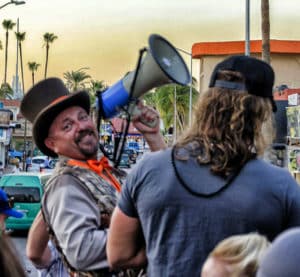 “It’s been a killer nine days,” Tournament Director Wayne Bisbee mused after all the fireworks had faded into the night. “We had some quality fish come to the scales; there was plenty of drama and we gave away an armored-car’s worth of money. I hope to see everyone here again Oct. 24-28, 2017, for our 37th season.”

No one family dedicates such a large slice of time or makes such a large impact on the sportfishing community of Cabo San Lucas through their individual tournaments. Only the Bisbee family has dedicated their lives over the past 36 years to filling those nine days in October with more and more ways of giving back to Cabo, its people and its economy.