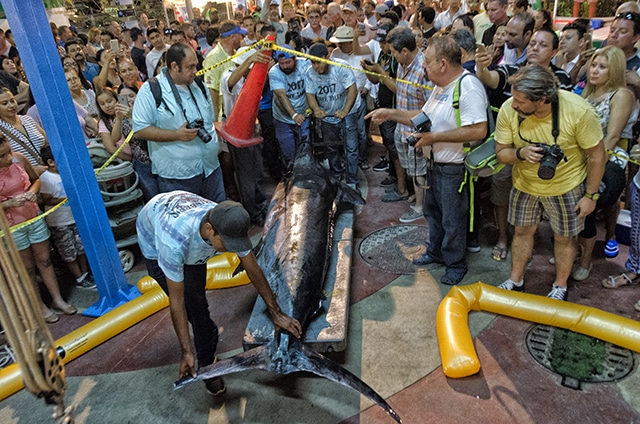 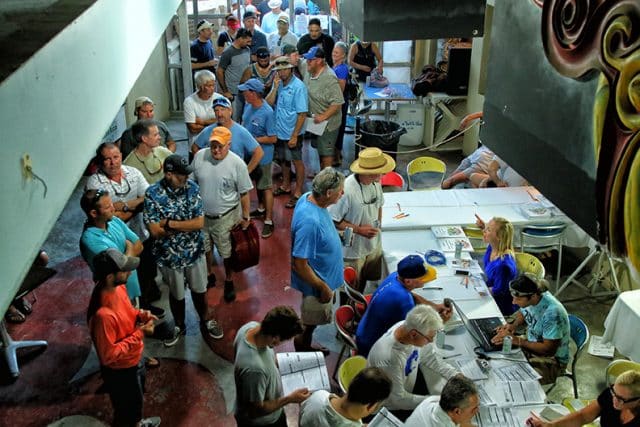 On Thursday afternoon, even though the sun was blistering hot, eager teams had already begun to gather seeking the shade as they waited to sign in with the registration crew of the 19th Annual Los Cabos Offshore Tournament held October 19 – 22 at the Puerto Paraiso Mall in Cabo San Lucas. 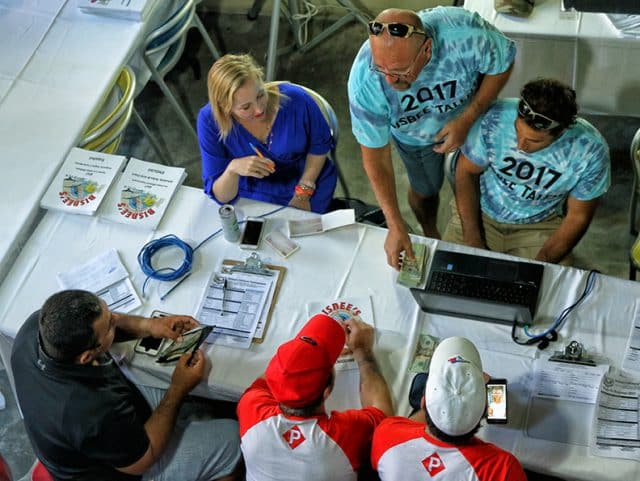 The line grew throughout the afternoon as each team filled out their paperwork and paid their entry fees. The slow-moving line allowed the teams plenty of time to visit with old friends and introduce themselves to new participants.

Owner, Dan Lewis and his team, Sporty Game, named after his 63-foot Bertram, reminisced about prior wins. “It’s not about the money,” Dan mused as he and his teammates and crew waited in line, “it’s about the recognition of your peers.” Teammates Tony Bykerk, angler; Steve Karser, angler; George Landrum along with Captain Carlos Rodriguez and mate Jacob Rodriguez agreed.

In 2010, they had won the Daily with a 426-pound billfish, topping Tiger Spirit by only one pound which resulted in a rule change from the rounding of pounds to include the ounces. 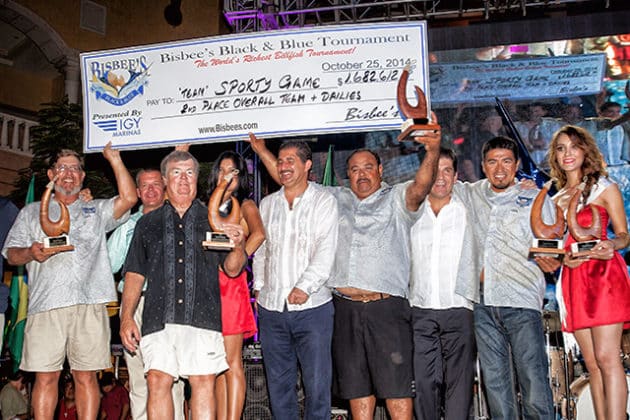 In 2014, lightning struck again, and Dan and his team joined the exclusive Bisbee Millionaire Club winning with a 337-pound billfish that they bested in 17 minutes on the last day. They earned the praise of another member of the Millionaire Club, Martha McNab of the Team Retriever. 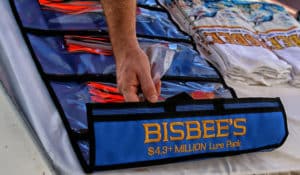 Ken Matney, owner of Hi-5 Custom Lures, held court in his booth as he displayed a special set of lures that had won a combined total of $4.3 million for some of his needless-to-say extremely happy clients. 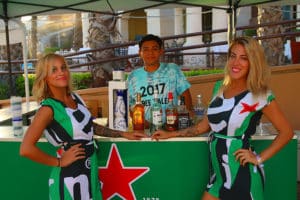 All afternoon, teams checked out the various booths, either waiting to register or just hanging out in hopes of picking up some intel on where the fish were, while tasting free samples of Clase Azul Tequila and Casa San Matias at their popular stands, and the ever popular Baja Cantina booth where there were plenty refreshments available. 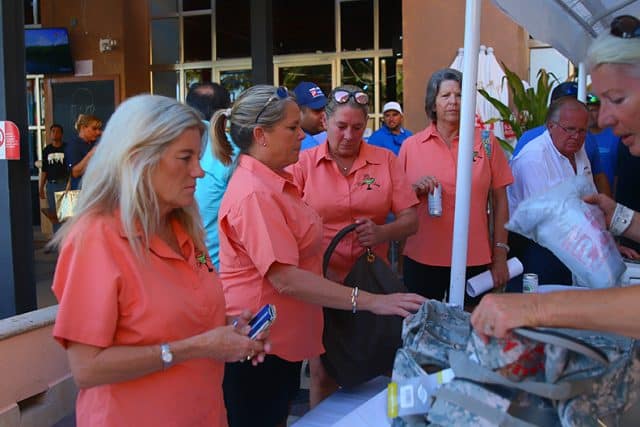 Once teams had completed their registration, they headed to the “Fast Track” tent to pick up their swag and attend the Captain’s Meeting.

“We are overwhelmed by the number of teams this year 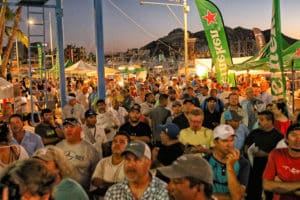 competing for over $823,500 in cash prizes,” Bisbee announced. “A month ago, many members of our Bisbee extended family were devastated by horrific hurricanes, floods and major earthquakes … the natural disasters in Texas, Florida, Baja and Mexico City … and we weren’t sure what our attendance would be. The final tally is 114 teams with 671 participants.

If you had asked me thirty days ago, I never would’ve thunk it!”

He continued, “The “Los Cabos Offshore” can’t be called the “Baby Bisbee” any longer. It’s all grown up! The Bisbee family and staff wants to congratulate every team represented here tonight. We are so pleased to see you.” 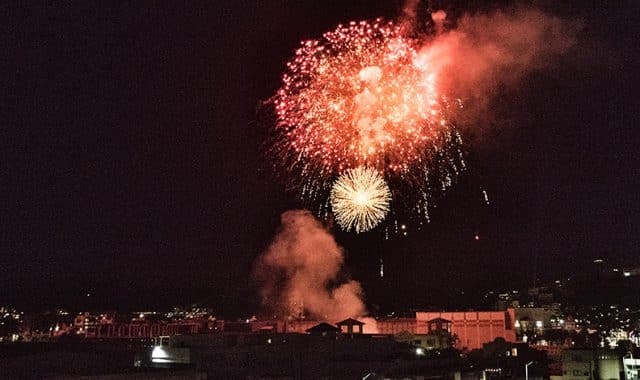 They were followed by the Bisbee’s “Fireworks” that traditionally kick off the upcoming tournaments. 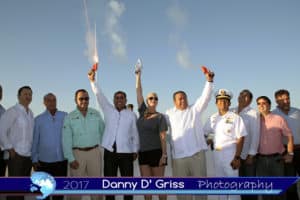 The following morning, the committee boat idled before the flare streaked over the fleet, and Bisbee mused, “Looks like we are going to have great weather and good fishing for the tournament.”

By early evening the list of fish weighed had reached two tuna and six billfish, including a few that didn’t qualify.

The first day started off quickly as Team Bull Rider released a blue marlin before the first hour had even passed. 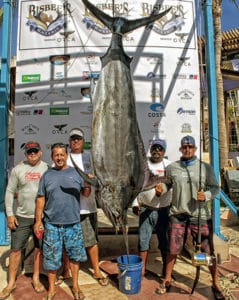 The black marlin had taken the team, led by angler Hugo Pino, Jr., on a one hour and 13-minute chase before being boated. As it was hoisted up on the scales, the spectators and crew tried to out-cheer each other when the weigh master declared the final weight to be 421-pounds.

The owner, team and crew posed with their catch as the flashes of the photographers illuminated the shadows.

Later in the day, the Team “Pescadores Sin Nombre” consisting of Barbara Arthur, Andy Beard, angler; Gary Burk, angler; Chase Rosa, angler and Bryan Whatley, angler aboard the “Sniper” arrived at the scale with a blue marlin of their own.

Once again, the spectators parted as the big fish was carted to the scale. When the fish was hoisted, the crew and angler, Andy 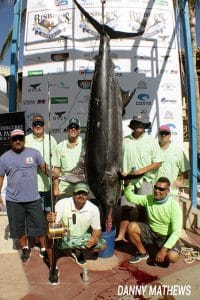 Beard, debated the weight. Would it be heavy enough to move them to the top of the leader board?

When Burt Merritt stopped the fish from swaying, Jack Teschel called out the weight … 350-pounds! The crowd gasped and cheered.

However, lines out of the water was still a few hours away and there were reports that Team Ten Brothers had been hooked up since approximately 10 a.m., plus, there were several yellowfin tuna hooked up as well.

Shortly after lines out, the vessel “Sea Boy” with Team PxP arrived 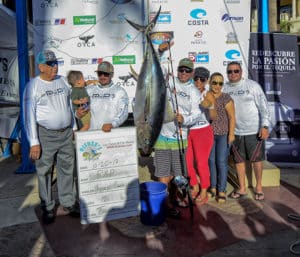 with the first yellowfin tuna of the day. Team member Juan Barajas had landed the yellowfin in just under a half an hour and it was clearly a qualifier. He was joined by his teammates Geraldo Javier, angler and Captain Carlos Peralta, angler at the scales. Although it barely broke the 100-pound mark, it was enough to place his team at the top of the leader board, much to the delight of family and friends who had heard of the catch and couldn’t resist coming to the scales to congratulate the team and celebrate their good fortune.

Still no word from “Ten Brothers” except that Jeff Kleitz remained hooked up to a monster. Finally, as the sun dropped behind the foothills, Tournament Control announced that the huge fish had been boated and “Dreamweaver” was headed for the scales with no ETA.

At last the weigh master received the call that the huge fish was in and on its way to the scales. As “Dreamweaver” tied up with only the tail of the big fish exposed, the crew struggled to unload the fish, finally succeeding, they placed it on the cart and moved it to the scale.

The the crowd had grown when they had heard the monster fish was on its way in; grudgingly they parted, “oohing” and “aahing” at the size of the fish, but they let angler Jeff Kleitz, team, including their team member, the resident Elvis impersonator, and cart make their way to the roped off scale area. Photographers scurried about trying to get a photo of the fat fish as it was hoisted, which was accomplished amid the grunts and groans of the dock crew as they struggled to have t 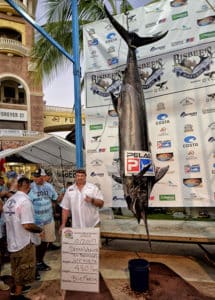 he fish clear the ground.

Weigh master Teschel shouted out the weight – 480-pounds! — and the team and spectators alike erupted with glee! “One fish…one man,” Kleitz bellowed. Many had thought they had already witnessed the winner when “Tiger Spirit” had weighed-in earlier.

By lines out at 5 p.m. there had been a total of 77 fish, either released or boated.

In the Base Entry Top Release Division, the competition was intense and at the end of the day the top three teams were:
1st El Suertudo
2nd Go Deeper 60
3rd Reel Quest 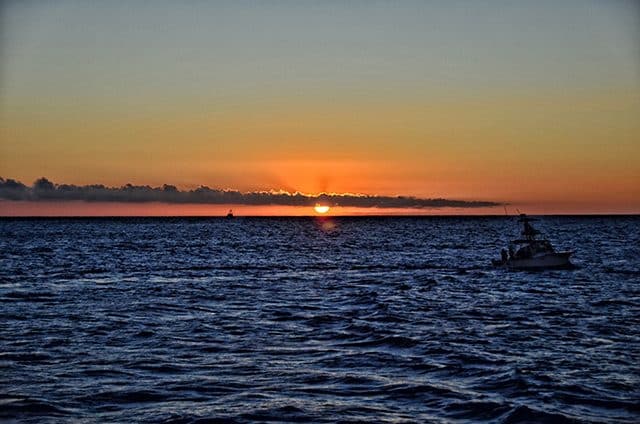 An unusual sky turned red by the rising sun greeted the fleet below on the second day as they raced toward their ‘hot spot’. Team Hooray’s Captain Francisco (Pancho) Bojorquez headed for the Gordo Bank and was rewarded with an early bite. Angler Kenneth Padgett had his blue marlin in the boat in less than an hour … actually 52 minutes. A nice way to start the day.

Meanwhile Axel Valdez at Tournament Control was swamped with a flurry of hookups and subsequent reports of boated fish which included blues and blacks in the Billfish Division, plus both yellowfin tuna and dorado in the Gamefish Division. He cautioned the Weigh Station crew to expect to get slammed when the scales opened at 3 p.m.

John Martin, aboard the Wild Catter, was the first qualifier to arrive at the scales with his 358-pound blue marlin leading a steady parade of boats throughout the afternoon.

By early evening, the list of weighed fish had reached two tuna and six billfish, including a few that didn’t qualify. Team El Torito on the Gladiator arrived with angler Antonio Rohero to weigh in his 362-pound black marlin.

Several teams were still reporting that they were hooked-up after sunset, and the staff waited for those final several hours which passed by slowly. Occasional updates confirmed that Team Hooray was still fighting their fish that had been hooked up since 4:45 p.m.
Finally, the Weigh Station was informed by Valdez who confirmed that the “Hooray” had boated a big fish and were racing in at 40-knots to make it inside the IGY Marina on time. 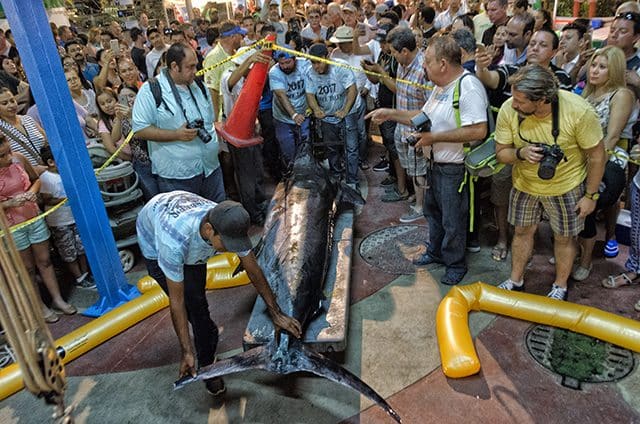 As the 80-foot Viking Hooray tied up to the dock, the jubilant crew and anglers hugged and hi-fives for one another. Pandemonium broke out at the scale as spectators, photographers and staff all jostled for a better view. 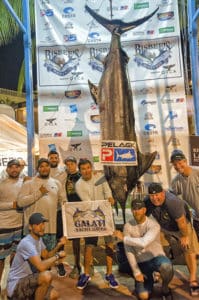 When the fish settled on the scale, weigh master Jack Teschel called – “574-pounds! –verifying that this fish was the largest of the 2017 Bisbee Los Cabos Offshore Tournament.

This was also the largest fish angler Tom Powell, Charleston, S.C., had ever landed and it had taken 3.5 hours to land it (which happens to be the longest time he had ever fought any fish). 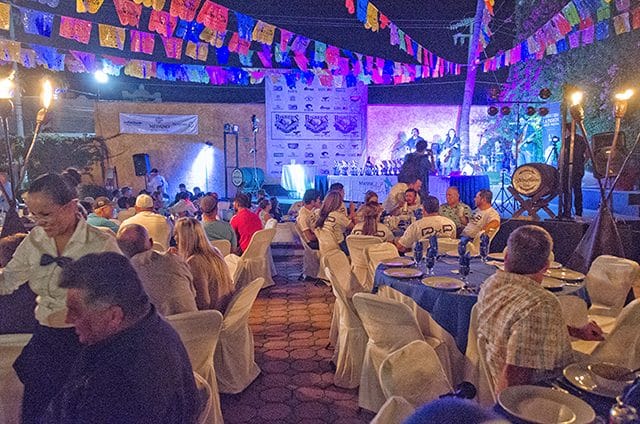 Sunday evening at the packed patio of the popular Maria Corona Restaurant, Wayne Bisbee welcomed everyone who came to honor the eight winning teams. He also thanked the many sponsors which included Casa San Matias who offered samples of their tequila that Captain Horace Barge, Reel Energy, had heartily endorsed earlier in the evening. 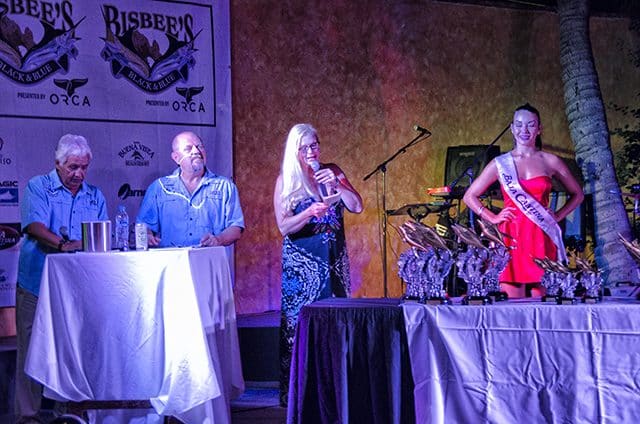 Tricia Bisbee introduced several Wounded Warriors from Chive Veterans Outdoors who had fished the tournament this year. She also introduced and thanked Jen and David Limpert of Hope for Los Cabos who collected all of the fish caught during the tournament, and arranged to have them cleaned and filleted for distribution to Cabo Kids. They have been feeding Los Cabos Kids since 2015; in 2016 they collected 10,400-pounds of fish which provided 31,200 meals.

Following her announcements, the early bird ticket for a free entry was drawn by one of the Ten Brothers’ Team, David Snobel, aka Elvis Presley, who drew Team 11 (REEL JUSTICE).

Before presenting the winning checks, Bisbee mentioned that the Capture Rate for this year’s event was a remarkable 90.48%!
Payouts 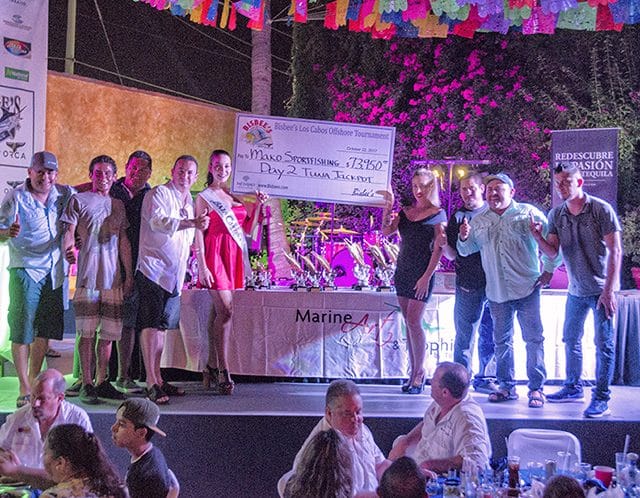 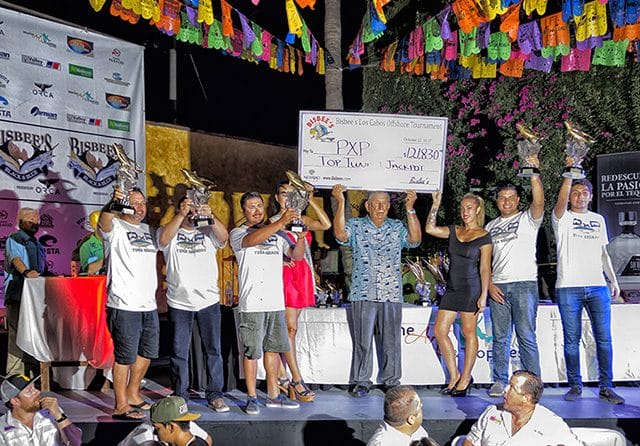 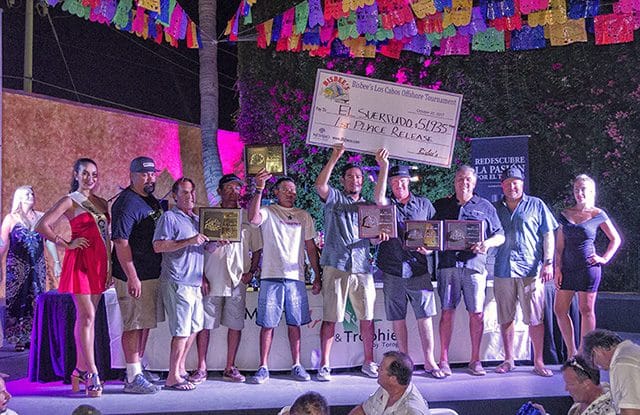 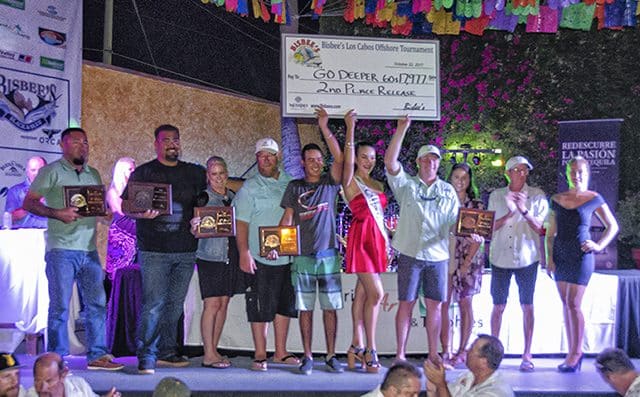 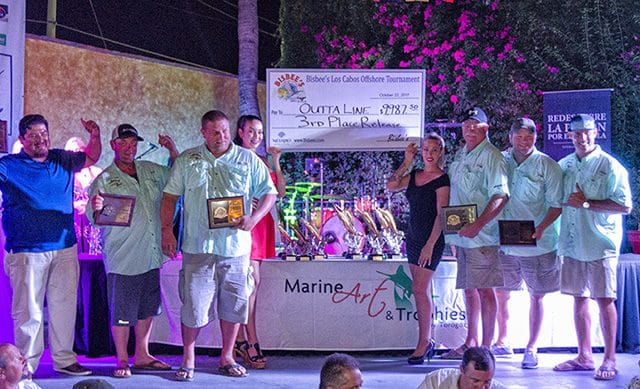 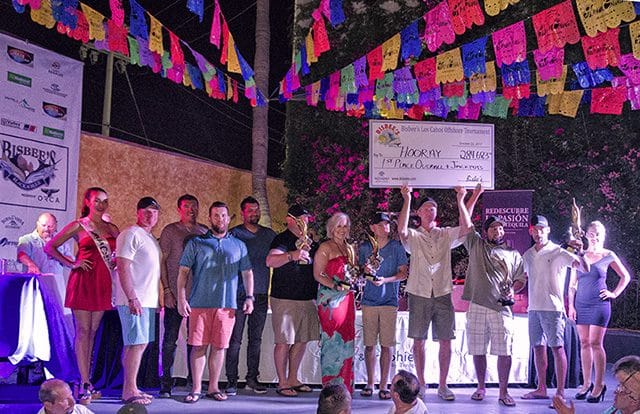 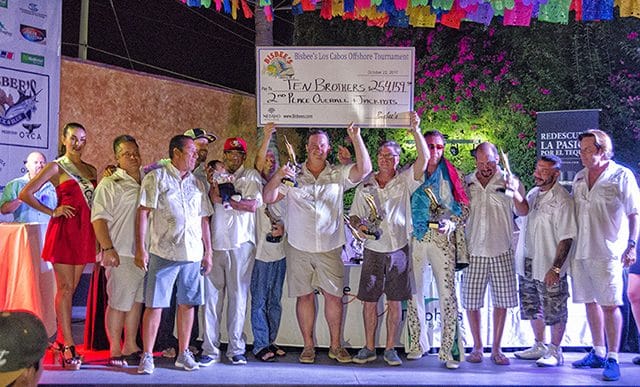 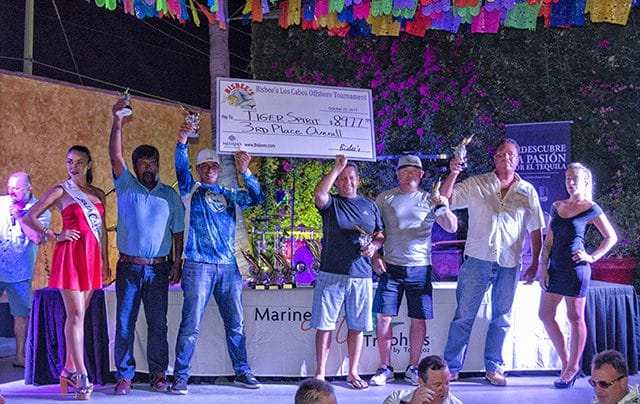 Next up was the final Bisbee tournament of 2017, the 37th Annual Bisbee Black & Blue, October 24-28. This event primarily targets black and blue marlin and must weigh a minimum of 300 pounds to qualify. Striped marlin, sailfish and spearfish are released with special prizes for the top release teams. This year’s across-the-board is $71,500, plus the winner-take-all “Chupacabra Challenge” is $60,000, which boosts the total entry to $131,500. Participants entering the Chupacabra have the possibility of becoming a member of the exclusive Bisbee Millionaire Club.