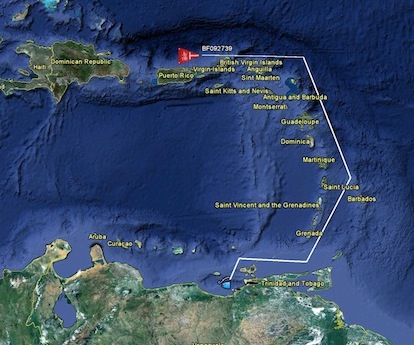 The Billfish Foundation (TBF) recently confirmed a marlin recapture and this fish made some impressive moves.

This white marlin traveled a total of 14 years, 5 months, 18 days with a TBF tag in it! The white marlin was originally tagged in Puerto Rico by Patti Morrison aboard Grand Illusion with Capt. Puchy Sanabria, Jr. The fish was recaptured in La Guaira, Venezuela, and reported to TBF by a local scientist. According to his report, this white marlin grew more than 12 inches and weighed at least an additional 30 pounds.

While this fish appeared to travel “only” several hundred miles, it is more likely that fish traveled thousands upon thousands of miles between tagging events.

TBF would like to thank all of its anglers who participate in active billfish research and conservation by tagging, releasing and reporting their billfish.

Remember to report your tags via mail or online at www.billfishtag.org!