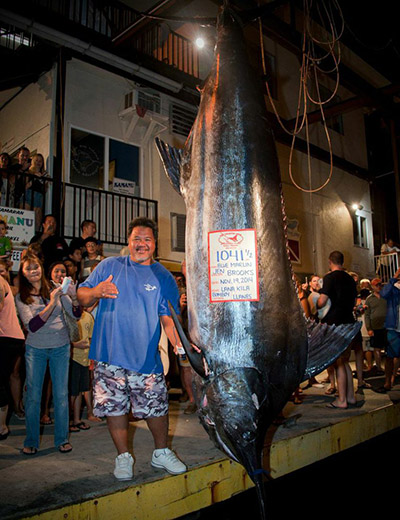 Kailua-Kona, HI – On Wednesday, November 19, 2014, Captain Bomboy Llanes, running a half-day honeymoon charter aboard the Lanakila, and against the odds, landed a 1,041-lb blue marlin.

The famed waters off of Kailua-Kona, along the southern coast of the big island of Hawaii are known to produce ‘Granders’, as in marlin surpassing the 1,000-pound mark are called, with some regularity. However, November is not considered prime time for grander fishing. In fact, until this day, November was the only month of the year in which this feat had not been accomplished.

Now, you can consider any month here a grand time to catch a Grander, or Beast as large blue marlin are called locally. 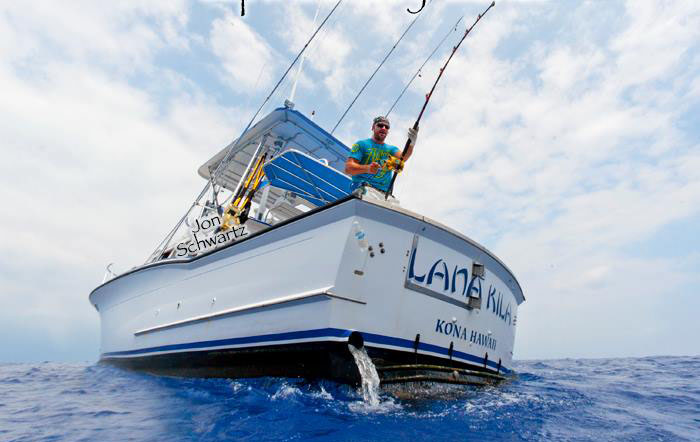 Bomboy and mate Ricky Perkins had met repeat clients, and honeymooners, Evan and Jen Brooks at the dock. The couple was planning a relaxing excursion from the cruise ship that was docked nearby. Shortly after leaving the Honokohau harbor, they deployed a spread of Bomboy’s famed big-game lures. Today’s pattern consisted of the Scarface, in blue vinyl over pink/yellow on the short-corner, the One-on-One (now known as the 1041) in black vinyl over purple/yellow on the long-corner, the Supernut in purple vinyl over black/yellow on the short-rigger, and the M-16 Bullet in blue over black/purple on the long rigger.

At 8:45 a.m., the massive fish ate the One-on-One on a blind strike, causing the clicker on the Shimano Tiagra 130 loaded with 130# Berkeley Pro-Spec, to scream in protest. No one saw the strike, so they had no way of knowing the “Brobdingnagian” proportions of the Blue. Not until it jumped a few minutes after the initial strike did Bomboy realize it was truly a beast. He immediately yelled his estimate of 1050, only to find he was only 9-pounds off later. This was not Bomboy’s first grander as he has previously landed a 1,258-pounder 10 years earlier. In fact, this fish had struck within a mile of where he hooked the previous one. They were trolling the area known as ‘India’ a few miles off the international airport. 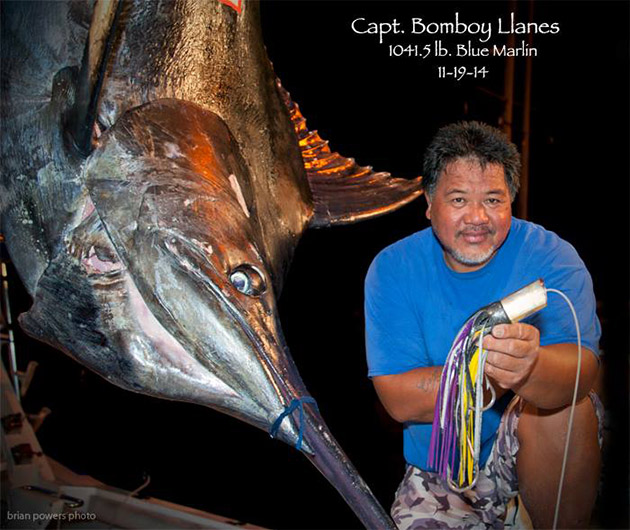 Bomboy prefers to really put the heat on big fish early in the battle. He instructed mate Ricky to push the lever past the strike detent, and all the way to the ‘sunset’ position. Maximum drag appeared to work as within an hour, the fish was nearly straight up-and-down under the boat at 180-fathoms. It would take another 7 hours to get the fish to leader for the first time. The marlin only jumped 6 times, early in the fight, saving its energy for the long battle that lay ahead. A few hours into the struggle, with Jen in the fighting-chair, Bomboy told them that they had a decision to make. They could stay and continue the saga with the adversary at the other end of the line, but they would surely miss their cruise-ship departure. Alternatively, Bomboy could call another boat to come out and pick them up. They chose to stay and play.

The battle had begun in the calm waters off the Kona coast (Kona is Hawaiian for calm), shielded from the relentless trade-winds by the two 14,000-foot volcanos, Mauna Kea and Mauna Loa.

By now though, the marlin had lead them into the rough-water channel between the big-island and Maui. Things were getting sporty, and the effort required increased exponentially. Exhausted by the ordeal, Ricky had been helping by lifting the rod, as the Jen cranked against the intense drag pressure nearing 60-pounds, as it was lowered to recover precious line. All aboard were spent, and when the fish finally came to leader neither Ricky or Bomboy had enough left in the tank to budge the fish the few remaining yards needed to finish the fight, as the living submarine planned on its side, pectorals deployed and not allowing itself to be lead any closer to the cockpit.

Finally, Bomboy decided to call in the reinforcements. He called his cousin Randy Llanes, who was unable to come but told Bomboy he would send ‘da boys’ out to assist. At 5:30 p.m. the SWAT team of brother Ronnie Llanes, Reuben Rubio, Kama de Silva, and Sam Choy arrived. Ronnie grabbed the rod and cranked in the few yards needed to allow Reuben to grab the leader. A few minutes later Bomboy saw his chance and backed-down hard on the fish and Ricky stuck it with the flying-gaff, followed by Ronnie and Bomboy with additional gaffs to secure the catch.

Back at the docks, after the excitement of the weigh-in and confirmation of Bomboy’s second grander, Billy and Laura Kimi, owners of the Kona Bay Hotel, graciously offered Evan and Jen a room for the night. The next day the couple caught a short flight over to Kaui where they met up with their cruise-ship, having had an incredible honeymoon adventure and securing their place in big-game folklore.