Big Hammerhead Released From The Beach 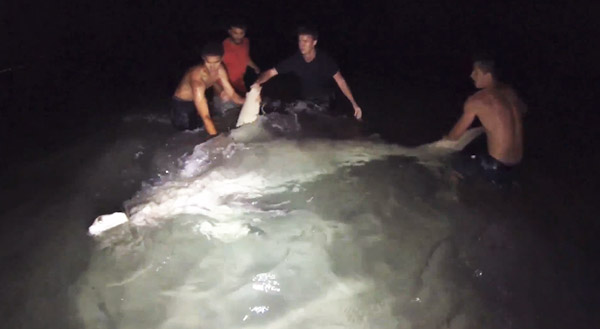 A Tuesday night earlier this year, started like many others for this group of anglers who share a passion for shark fishing from the beach. They prep their gear, set out their baits and then wait for a stirring in the dark.

“We have caught just about every type of shark there is to catch in Florida from the beach. We have been dedicating our efforts to this fishery for about four years”.

The team of friends, who have taken the name, Landshark Fishing on Facebook, consist of Viktor Hluben, Brooke Crist, Garrett Reingardt and Ben Begovic.

The shark took the bait that was impaled on a 20/0 non-stainless, Mustad circle hook. They use this set up to insure the best survival chances for the fish. The circle hook is very reliable for hooking the fish in the corner of the mouth, and the non-stainless steel hook will rust out of the fish in time.

Viktor emphasized, “We put great effort and pride into making a quick and careful release with the sharks survival as a priority”. I fought this shark on 150-pound test mono, spooled on a Penn 14/0 senator. It bit around 10 PM and took about an hour and a half to land. I fought it stand up with a harness.”

Brooke Crist was the camera girl, and often is the angler as well. It took a team effort to land and release this shark that was estimated to be about 14 feet long and weigh somewhere around 700 pounds.

Congrats from BD and keep up the good work.