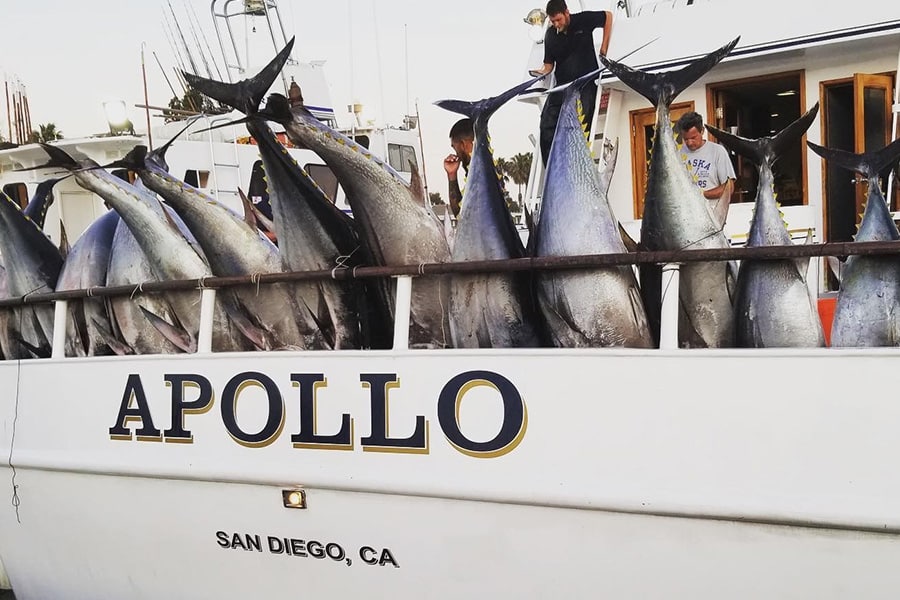 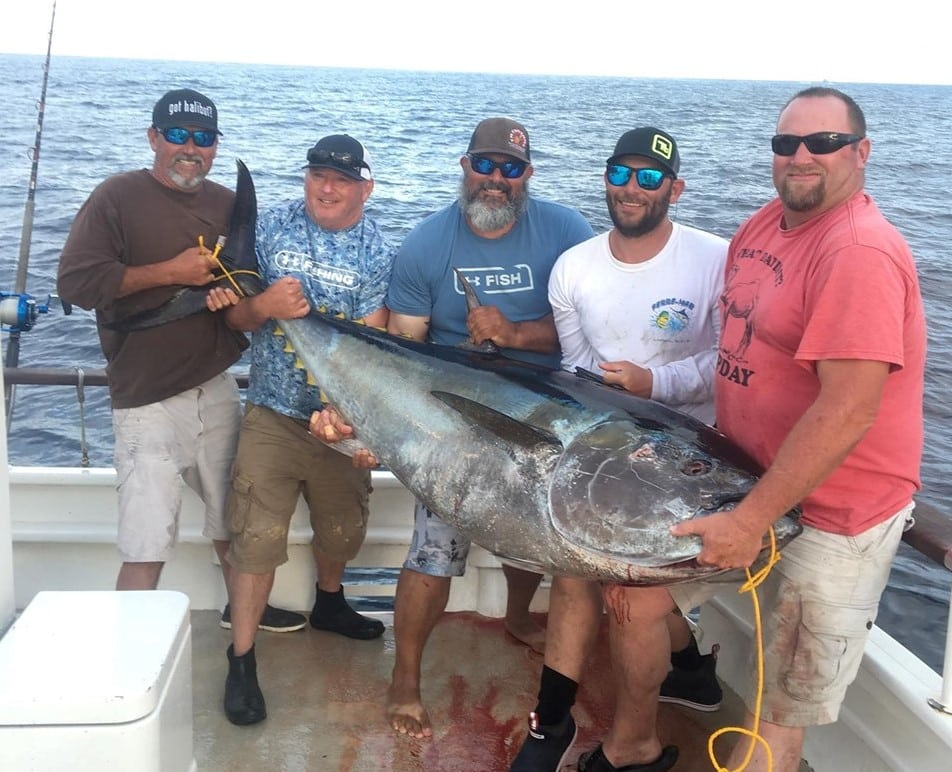 It’s been another busy week of post Labor Day fishing in Southern California. With swordfish and marlin up north, to yellows at the islands, big bluefin showing close to the beach and yellowfin biting down south, there’s a lot to cover this week. But before I get into the details I want to take a moment to note that when I logged on to post this column I noticed that this is the 501st article I’ve written for BD Outdoors. Back when they first asked me to start writing for the site in December of 2011. I had no following, no idea what I was going to write about every week and no idea of how long they’d be willing to pay me to do it. Looking back, the last eight years have gone by in a blur of amazing fishing and I’m thankful to all of you for joining me on the ride. Well enough about that, it’s time to get started on the first of the next 500 articles. 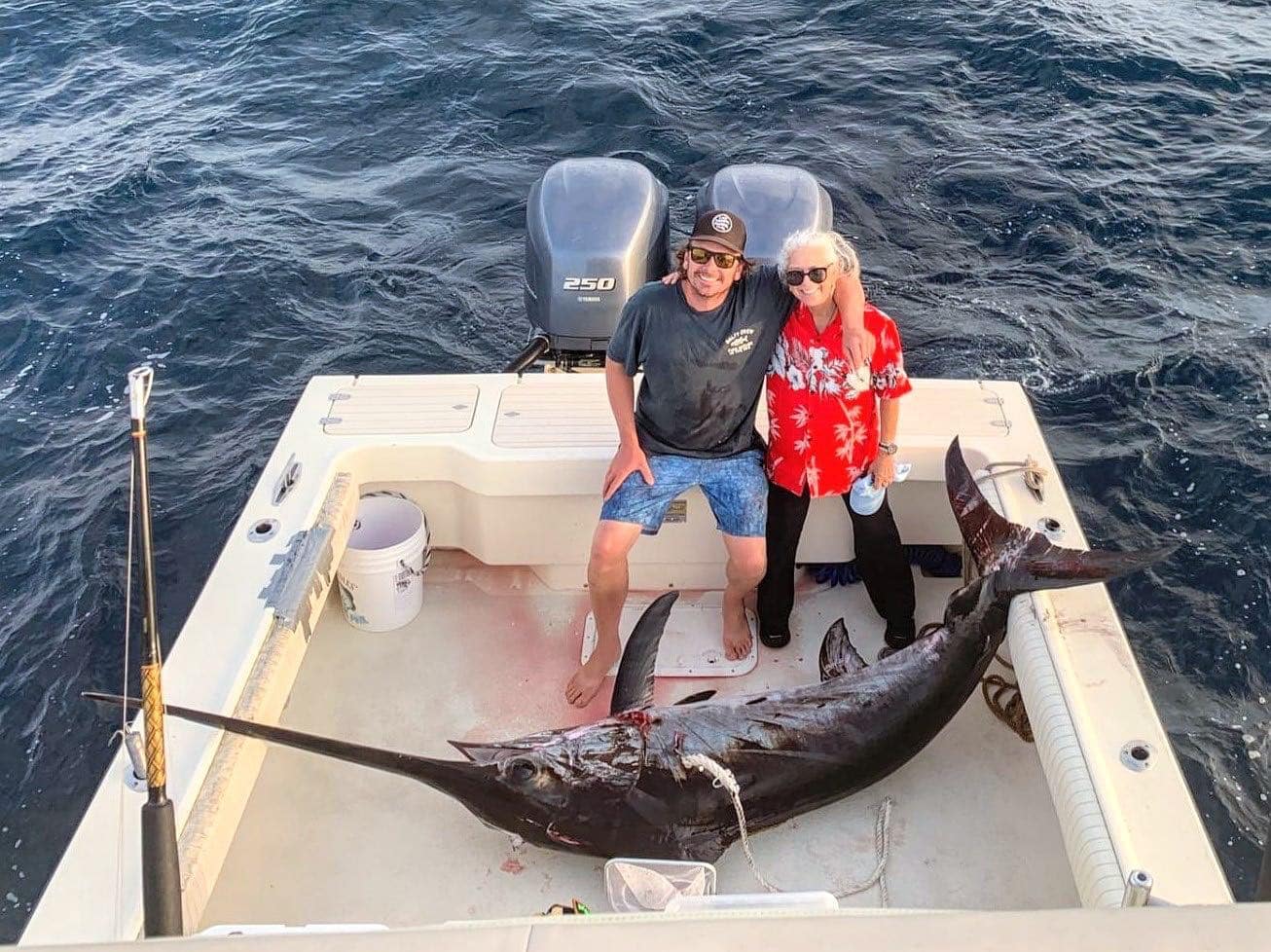 The big news continues to be the emerging deep drop swordfish fishery. There have probably been a dozen fish caught this week, including this one, not surprisingly caught aboard Brandon Hayward‘s charter boat. As usual, Hayward was the first charter operation to switch gears and adjust to a new fishery and reminiscent of his wahoo, lobster combo charters he offered in the fall of 2015, his facebook post had this to say. “After talking about it the last couple of seasons—and how attractive lobster/swordfish combos could be—we decided to do. Or at least Cathy did. She said she was down to fish nothing but swordfish for the rest of the year. After missing one trip prior, she connected on this tanker yesterday afternoon. By far the most incredible, emotional, and most powerful fish we’ve been a part of. Cathy Needleman, the first client to catch a deep drop swordfish in the Southern California Bight, 1 hour, 23 minutes, September 26. The fish went 287-pounds, in true Needles fashion. We will be offering deep drop trips from October 16 to November 30. Rates will be the same bluefin. Clients with bluefin trips in the books can also pivot to sword trips if they want.” Way to go Brandon and Cathy!

There were quite a few swordfish hooked and some landed during the Pesky Billfish Tournament and Avalon Billfish Challenge this week. I fished the first of those and while my team wasn’t lucky enough to catch a swordfish, we did get a marlin though, I got some pretty cool pictures during the tournament. You can see the pics and read my full report by clicking here. 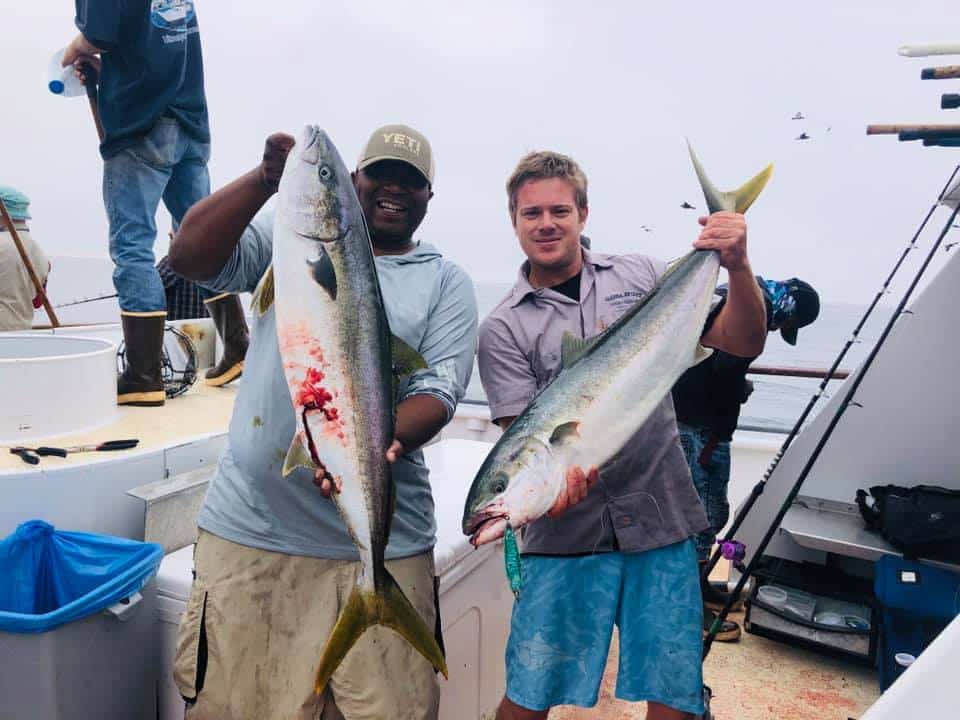 Since we’re on the subject of the Channel Islands, there’s been a bit of a yellowtail bite up there this week and the Aloha Spirit has been on it. The boat’s best score of the week was 36 fish for 11 anglers on Tuesday. The yellowtail are also biting at Catalina Island and 3/4-day boats are catching some just about every trip. Almost all of these fish have been large to very large and they’re losing quite a few of them, so the fishing is often better than the reports reflect. If you’re heading out, I’d go during the week to avoid the crowds and extra boat pressure. 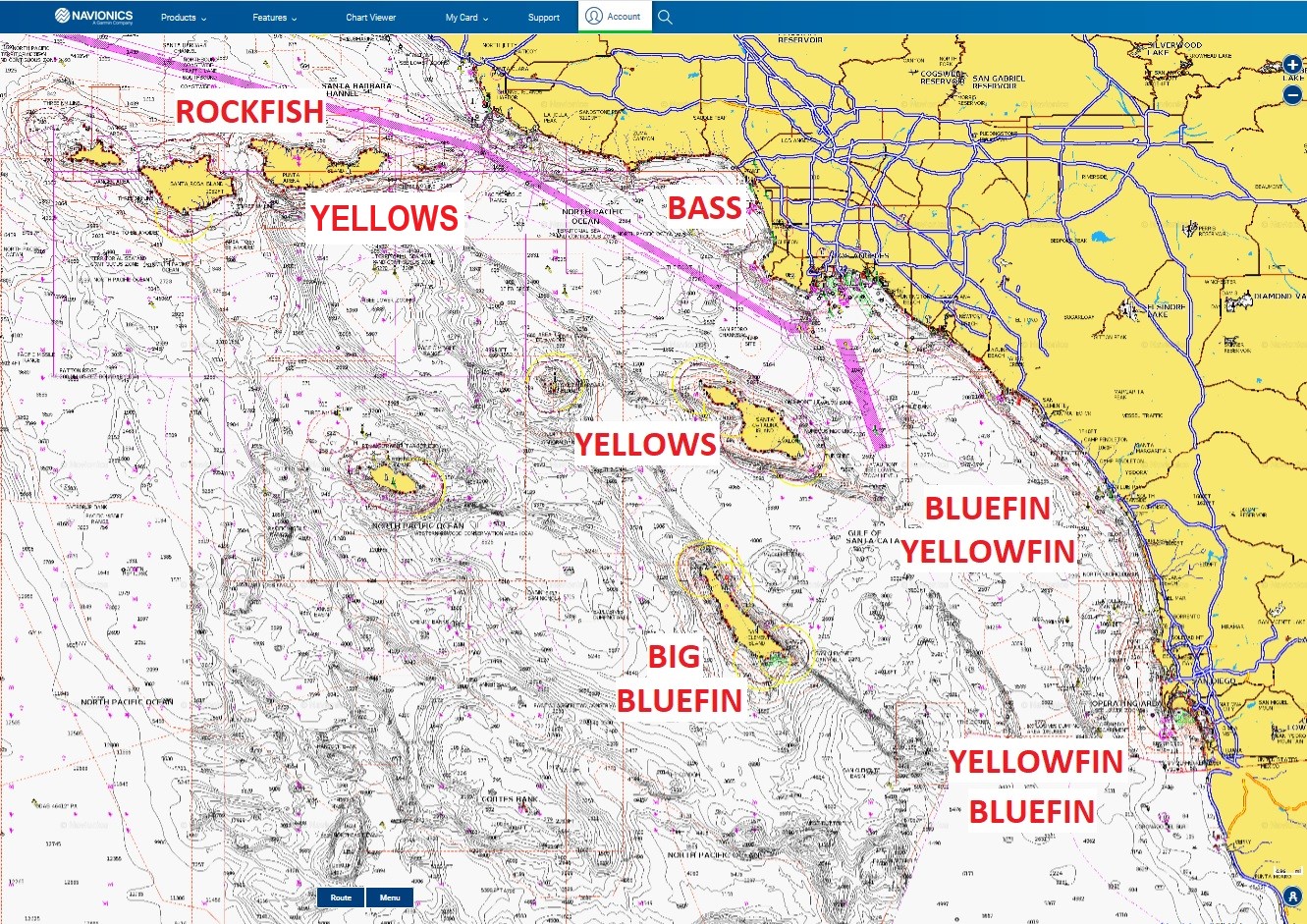 I forgot to add the swordfish on this week’s Navionics map but you could pencil one in anywhere from the Mexican border to Santa Cruz Island, along the coast or on any offshore bank and you probably wouldn’t be wrong. There are a lot of swordfish around right now and I think we’re going to start seeing a lot more of them caught in October and November. There are still some bluefin and yellowfin along the beach outside and below Dana but they were more show than go this week. Captain Gerry Mahieu saw 50 to 200-pound bluefin 12 miles off the beach on Saturday that wouldn’t bite. He went back on Sunday and went one for two on 100-pound bluefin. He ran back out there on Tuesday and found lots of yellowfin in the same zone but couldn’t get a bite despite casting on fish all day. The fish that have been caught are mostly biting later in the day. 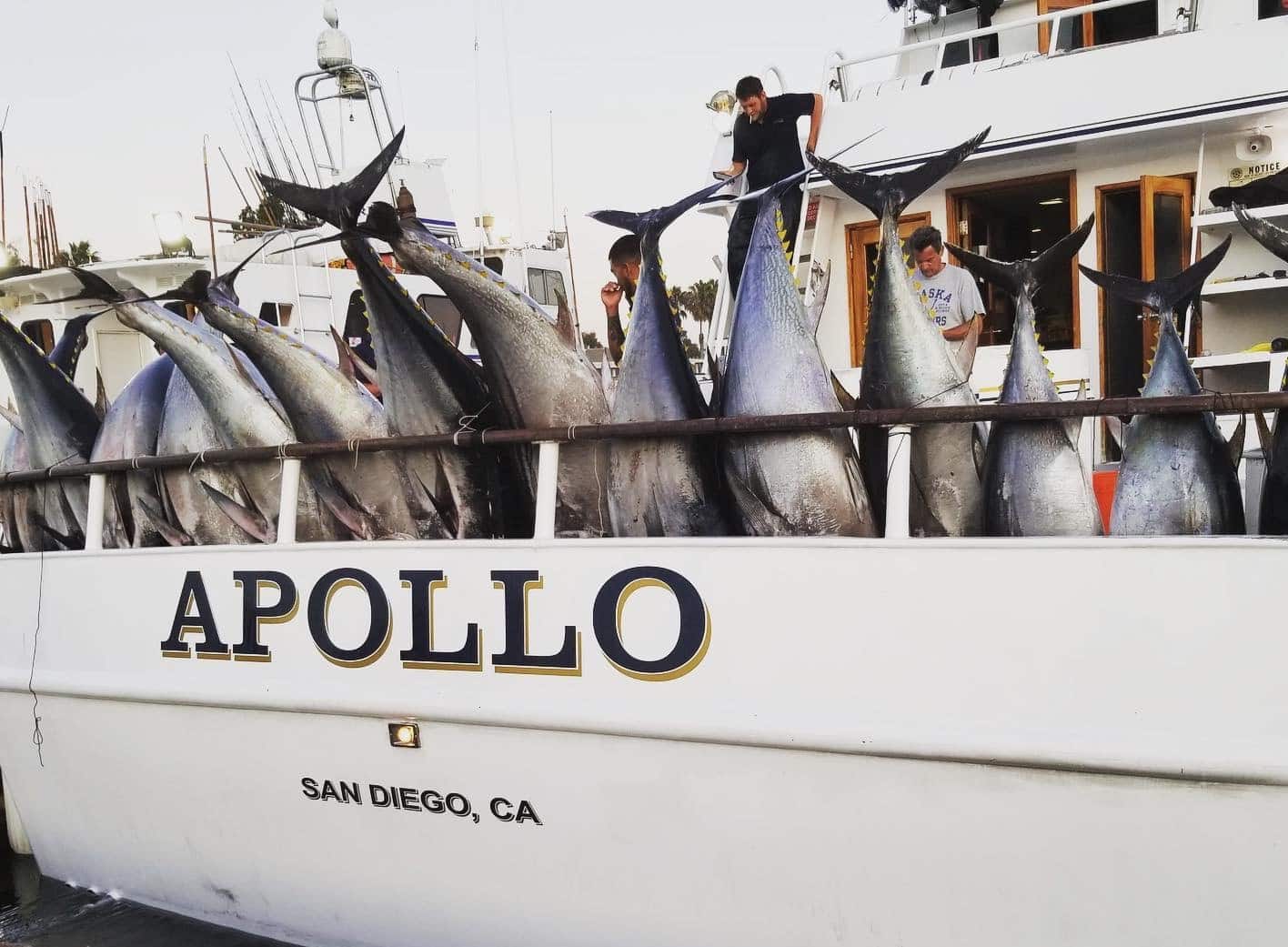 The big bluefin are still biting very well for boats fishing the backside of San Clemente Island. The photo above is from a trip aboard the Apollo this week that tallied six bluefin over 300 and four over 200-pounds for the trip. Private boaters have been getting in on the act as well with fish up to 350-pounds being caught this week. If you’re planning on heading out there this weekend on anything smaller than a sport boat, I’d take a hard look at the weather forecast before doing so. These fish seem to bite better when the wind is blowing but right now the forecast looks like the wind is going to be blowing a little too hard this weekend. Finally, the tuna are still biting on the local bank off San Diego and there has been a recent influx of skipjack makes me think that most of the yellowfin that are coming up this way are probably already here. Hopefully, all of these tuna stick around and bite for a couple more months!