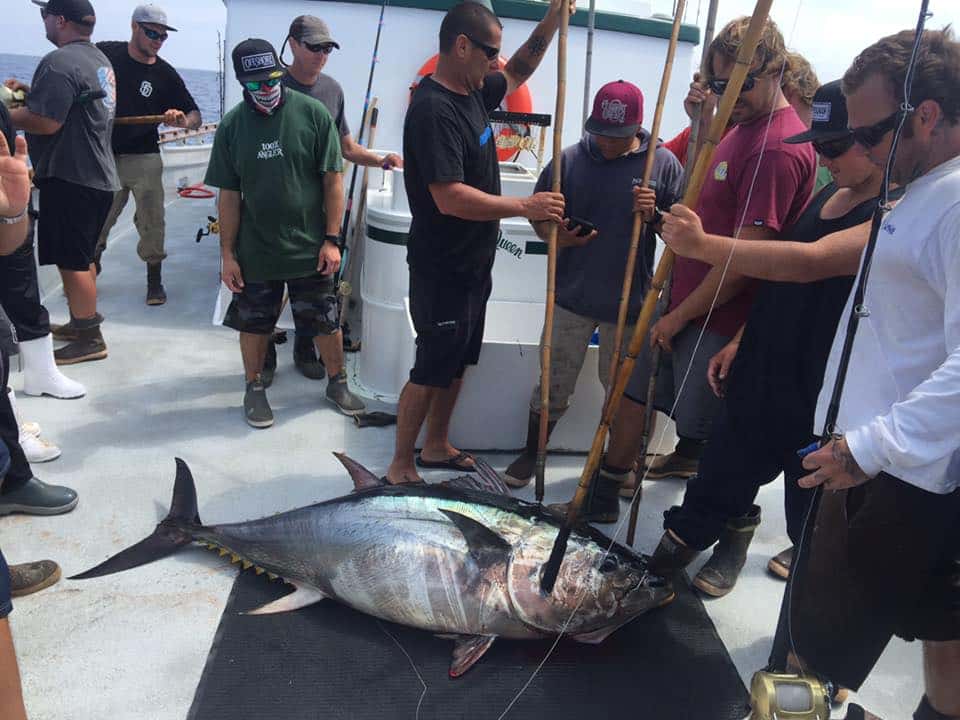 What a difference a week makes! At this time last week the bluefin weren’t anywhere to be found and I incorrectly prognosticated that they might be gone for good. Well, for once I’m glad to say that I was wrong. The tuna are still here and the big ones are biting better than ever.

After the fish showed up again last Thursday, I decided to take a look around on Friday afternoon. Matt Kotch and I launched out of Dana Point at 1:00 p.m. and saw multiple schools scattered from ten miles inside the 209 all the way to the 181. Different schools held different grades of fish and we saw everything from 30-pound yellowfin to 200-pound bluefin. The problem was that the fish were so keyed in on the micro anchovies that they wouldn’t bite our lures. except for one fish that was on and off again in a second on the Colt Sniper. The best show we had was on the slack high tide when the fish had the anchovies balled so tightly that they were jumping out of the water to get away. We only saw a couple other boats the entire afternoon, but heard about traffic jams on the main banks with no fish being caught, so my advice is to avoid running right to any bank and look around on your own instead. were more show than go again on Saturday, but by Sunday they’d decided to bite in earnest.

Spike Ivans was out with his son Fischer and they tag teamed a quality bluefin tuna on a day filled with run and gun action on foamers of fish. That same day my friend John Curry returned from a trip that he’d told me he’d be fishing for marlin, and only marlin, and texted me a picture of a couple big bluefin in his kill bag that, “got in the way of my marlin fishing”. Curry went on to say that the bluefin that he saw were more active than any he’d encountered all season. These schools of 70 to 100-pound tuna where spread from below Oceanside to above the 277 and boat along that entire stretch were reporting action. Though some days have been better than others, these fish have been biting all week long. I spoke with Captain Gerry Mahieu yesterday after he returned from a charter he ran out of Oceanside. He reported having foamers up the the entire day and his clients getting at least 20 bites and hooking 12 fish. Sadly, the big fish biting the small jigs made for lots of pulled hooks but his clients managed to land several quality fish. If you’re going to be casting a Colt Sniper to these bluefin, I recommend removing the stock treble hook and replacing it with a large assist hook. Also remember to use a heavy leader with the smaller jigs as the fish are swallowing them completely and will bite you off on lighter line. Mahieu said that he has a few openings in the next couple weeks if anyone is looking to go out and target these bluefin. He can be contacted through his website. Lots of jumbo bluefin made it to the dock this week as well. I’ve heard of at least a half dozen 250 pound class fish being caught this week. I think that there have been more of these big fish landed lately because guys are figuring out how to target them. Most of these really big fish, like the 250-pounder Chris Lilis caught on Wednesday are coming on the kite.

The kite technique that’s catching these fish is not your standard, drift, fly kite, deploy bait and wait for a bite deal they do on long range trips. Instead it’s a combination of find fish schools, sort of troll kite bait, catch giant tuna technique that took the guys that are doing it successfully a while to figure out. I spoke with Captain Brandon Hayward, who has multiple cows to his credit over the last few weeks, and he said that he’s going to be running cow bluefin or bust trips for the next few weeks or until the big fish move out of the area. If you’re interested in getting on one of the open party trips run by Captain Justin Reynolds aboard the Maritime, you can contact them through the website or by calling (949) 212-0719.

There are a handful of sportboats fishing these tuna, like the Pacific Queen who had seven bluefin over 100 and two over 200 on a recent trip. The problem is that these boats need a consensus of all passengers to target the big ones and since most open party trip passengers don’t have the gear or interest in trying to get a handful of these fish, the trips ended up fishing for yellowfin. If you want to fish a sportboat, I recommend calling the landing and ask about trips specifically targeting big tuna. That being said, your best bet to catch one of these fish is to hire a guide or charter a four or six pack boat.