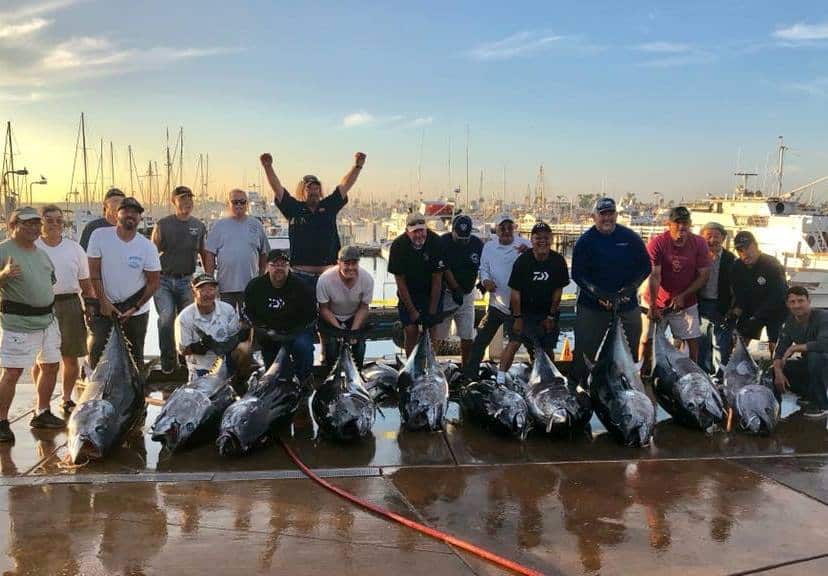 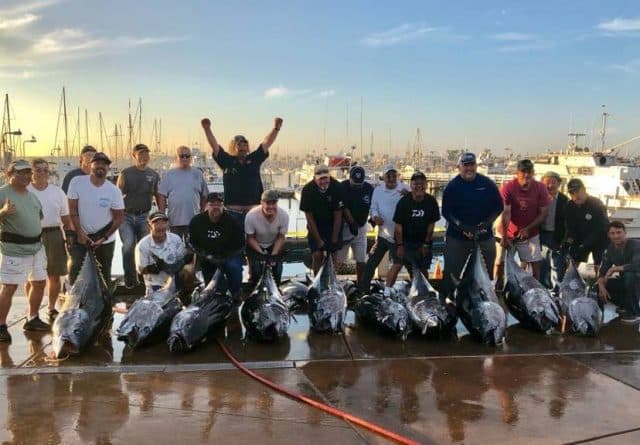 As has been the pattern this year, the big bluefin tuna bit on the full moon for the fourth month in a row. This photo is from a three day trip aboard the Pacific Queen that returned to the dock Wednesday morning with 43 bluefin Tuna, 9 of which were over 200-pounds and one breaking the 300-pound mark. One of the coolest things about this and other photos like it is that it shows just how adept these boat crews have become at targeting these big fish. 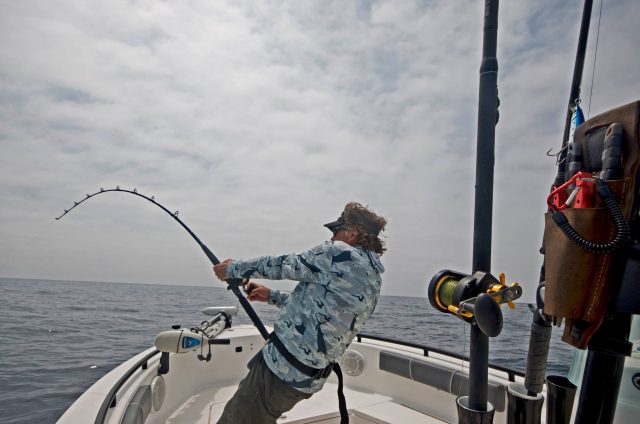 Speaking of being adept at landing big tuna, if you read my report from Sunday you already know that I’m not; as Decker and I went through a lot of bites to land a single fish. That being said, what I have been pretty good at is finding fish without a bunch of boats around and I’m here to tell you that it’s a lot easier than you might think. These tuna have been acting in a very predictable manner over the last few years in that they are popping up in the same areas again and again.

If I were to guess, I’d think that the fish aren’t actually going anywhere far, they’re just not always feeding on the surface so people think they left. Take for example the fish we caught on Sunday. Back in July, Matt and I had found the big tuna off the outside edge of the ridge below Catalina. Over the next few weeks I’d heard occasional reports of fish popping up along that ridge and up the backside of Catalina. The previous week there were some fish caught in the channel between Cat and Clemente and the area got some coverage midweek but didn’t produce.

Decker and I discussed all of these things when planning Sunday’s trip and concluded that running the 500 fathom curve from the ridge up along the backside of Catalina was our best option of finding some fish we could have to ourselves. We also considered that if the fish were going to pop up it would likely be around the morning high slack tide. So we put ourselves in the right general area, on the right part of the lunar cycle, at the right time of day and the tuna ended up being right where they were supposed to be. I don’t spend much time fishing offshore but it seems like finding these big bluefin is a lot easier than trying to figure out the calico bass bite at Palos Verdes when the current is running straight into the beach. You just need to pay attention when you’re not on the water and then have the courage to drive in a direction that the other boats aren’t going. 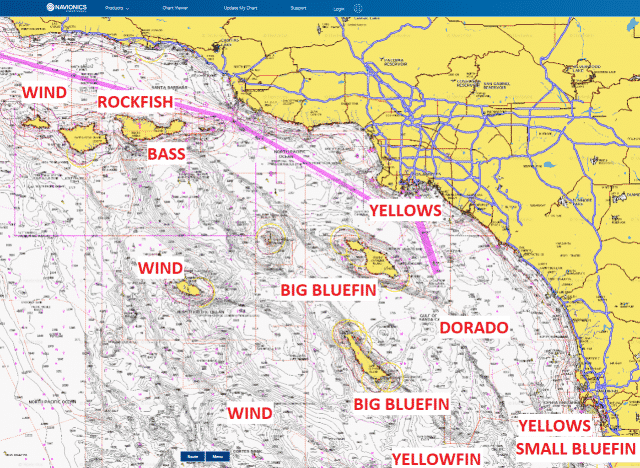 As I reported last week, there was quite a bit of wind associated with this month’s full moon and it’s been blowing across the outer waters all week. At the time of this writing around noon on Thursday, the wind is still blowing on the inner and outer waters but most of the bight should be fishable by the weekend. So, let’s go to the Navionics Chart and check out our fishing options.

The wind is going to continue to blow over the outer waters all weekend, which takes the outer islands like, San Miguel, Santa Rosa and San Nicholas out of the fishing equation. The same holds true for Cortes and Tanner Banks at least through Saturday as winds are calm on Sunday but residual wind waves will likely cause it to be unfishable as well. Other than those zones everything else should be doable on sport boats but private boaters should check the forecast before making any long runs. 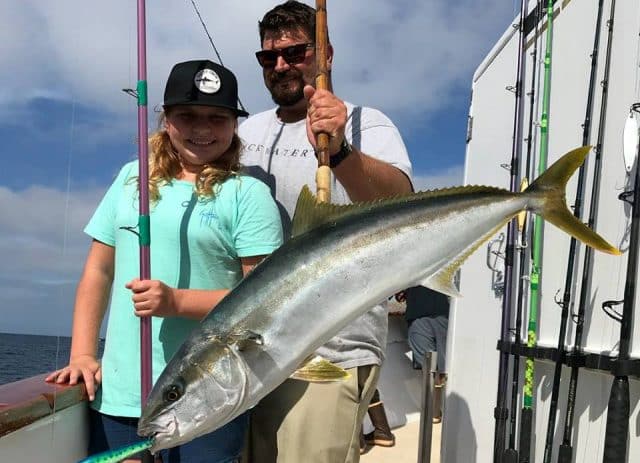 Starting down south, the yellowfin are still biting for the overnight and full day boats fishing out of San Diego. Weather has been a factor the last few days but the fish are still around so the scores should improve dramatically in the coming days. The Coronado Islands are still kicking out lots of yellowtail and a handful of bluefin tuna. Wednesday’s trip aboard the San Diego out of Seaforth Landing produced 13 bluefin tuna, 35 yellowtail and 51 bonito. Tessa Ericson, who’s getting some gaff help from her dad Captain Danny Ericson (who runs the New Del Mar), caught bluefin tuna and yellowtail on the surface iron. 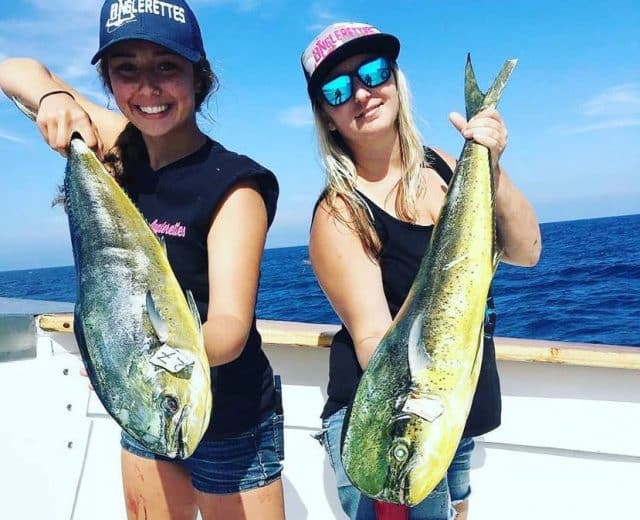 Dorado, like these caught aboard the Liberty out of Fisherman’s Landing, are biting from below the Mexican border up past Catalina Island. The dorado can be found on kelp paddies and there are some open water schools being found while trolling. If you’re looking for dorado, I’d suggest checking the fishdope Chlorophyll chart before heading out because there is a lot of off color water on the local banks right now. There are some dorado in the dirty water but your chances of finding the right paddy get much better if you stick to looking for it in clean water.

I’m sure the big bluefin will still be biting on the backside of San Clemente Island once the weather comes down a bit and they’re probably still swimming around the backside of Catalina as well. There are some yellowtail biting at the Horseshoe Kelp right now, but the sea lions have been brutal. Other than that, there are still a few yellows being caught at Santa Cruz Island, but bass and rockfish are the go-to targets up there right now.