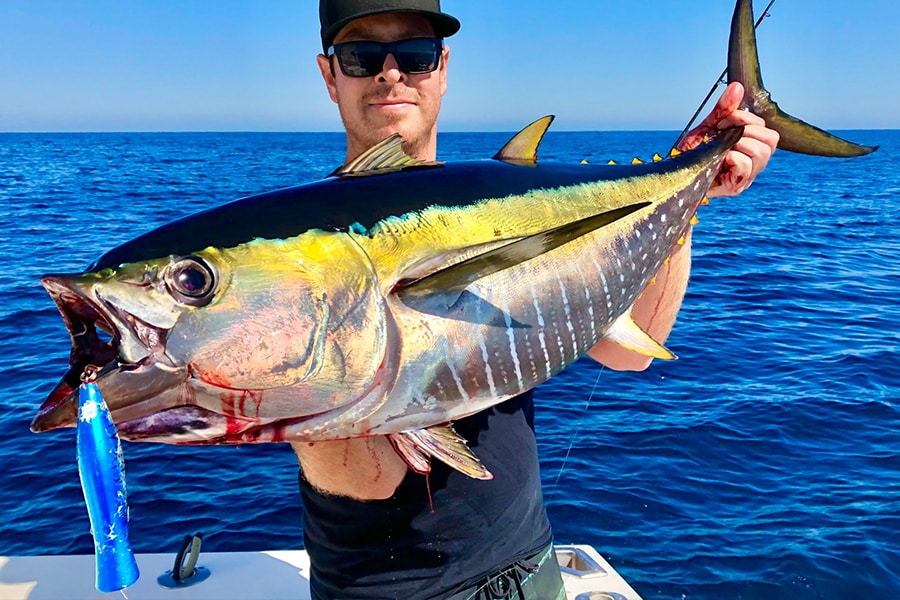 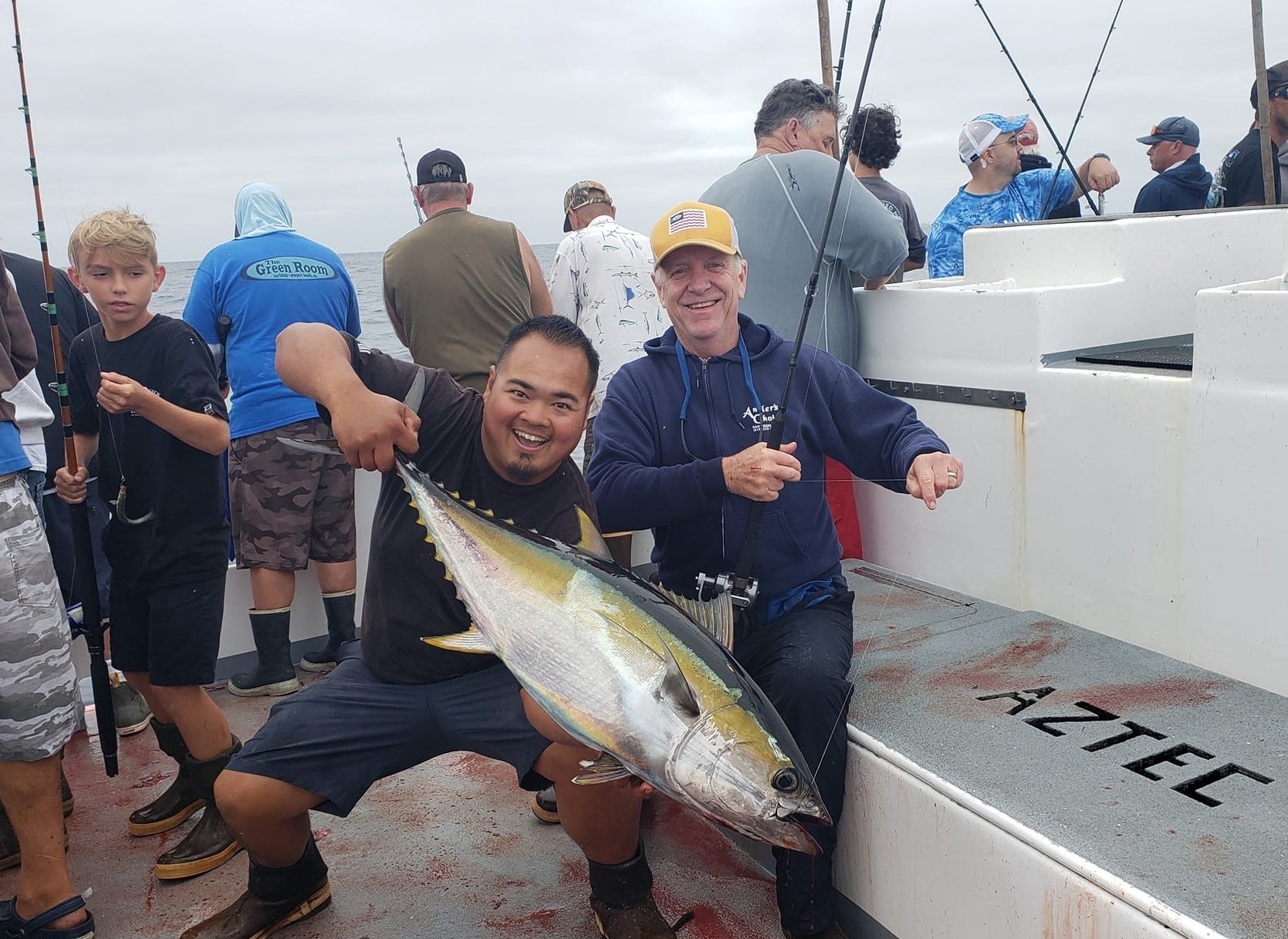 The San Diego out of Seaforth Landing reported in on Wednesday afternoon with, “225 yellowfin tuna 50 skipjack tuna for 45 anglers today. The entire fleet had blood running out the scuppers. The best fishing of the season is happening right now. Don’t miss out.” Meanwhile, the captain of the Grande had this to say, “40 anglers on a full day offshore had 164 yellowfin tuna and 30 skipjack. The yellowfin are mostly 15 to 25-pounds with plenty of 30-pounders. The skipjack are beasts too. We’d recommend a 20-25# rig for finesse fishing with a small size 2 j hook and also bring a 40# rig for getting down to business when they want to bite the way they have this entire week.”

The private boaters are getting in on the action as well as member Ricky Fish reported on our message board, “Threw the trollers in a few miles northeast of the 371 proper pretty far outside of the fleet. Before I could grab the bait rods down from the rack we had doubles going on the cedar plug and blue skirt jig, one being a mean skippie and the other a mini yf. Stopped the boat and bailed a scoop and had them boiling up right away.” Sounds like pretty good fishing to me and with offshore winds in the forecast and a full moon coming on Sunday night, I don’t see any reason the bite shouldn’t continue through the weekend. 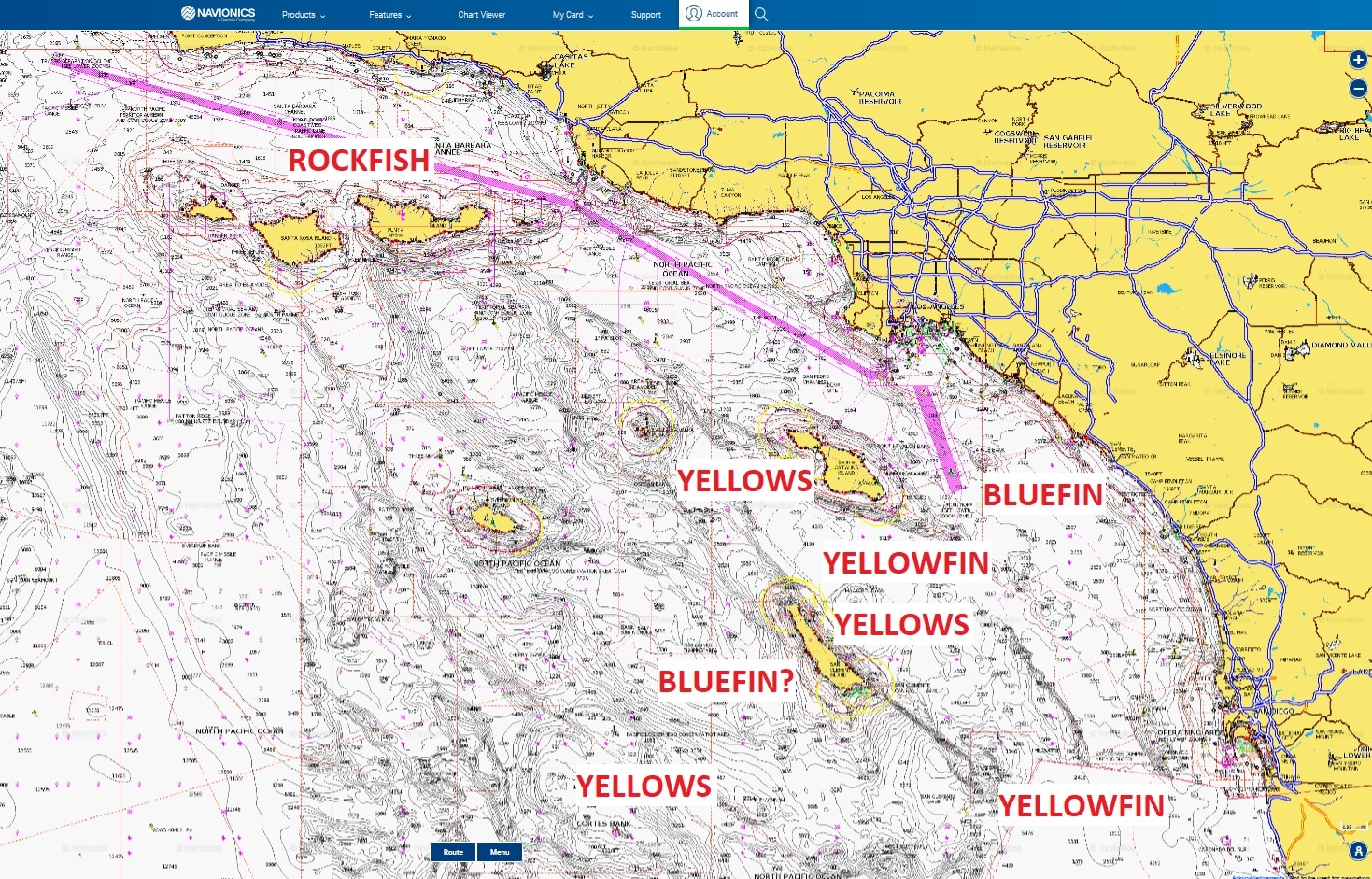 We’ve got a lot to cover, so I’m going to jump right into this week’s Navionics Chart. As you can see, the only non-pelagic fishery I listed this week is the rockfish bite at the Channel Islands. While not as exciting as some of the other stuff that’s happening, with strong Santa Ana’s blowing on Friday, I think that this might be a very good weekend to make a run to one of the outer islands to fish rockfish. Keep an eye on the forecast though as the ride home might be a tough one if the offshore winds continue into the weekend. 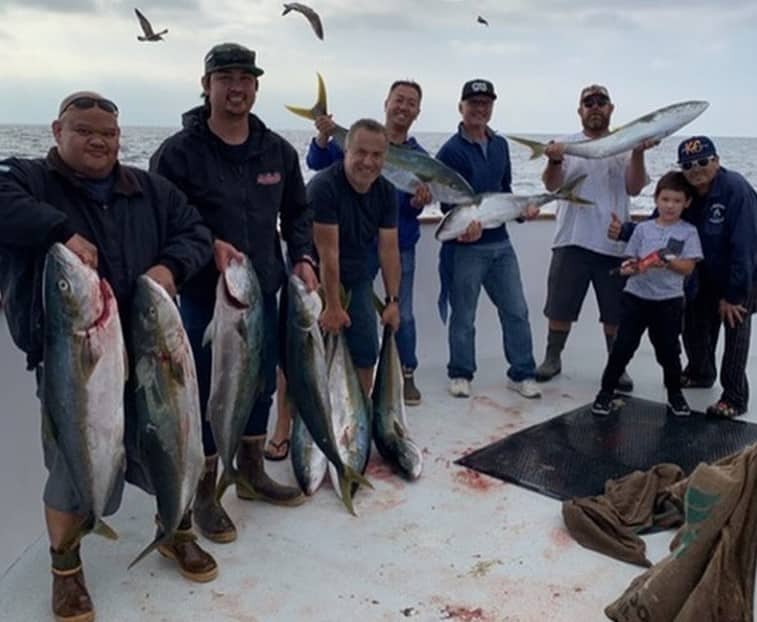 Let’s talk yellowtail. There are big fish biting for the 3/4-day boats fishing Catalina Island. These fish are coming from the backside of the island but that’s all I’m going to tell you because I don’t want the captains blaming me for sending boats over when they inevitably get gang banged by skiffs this weekend. I know one thing for sure, if I ran a 3/4-day boat I’d have all of my customers pose for photos of a blank background, like this pic from earlier in the week aboard the Native Sun out of 22nd Street Landing. If you look at the pictures of some of the other boat’s social media it’s pretty easy to figure out where they’re fishing, just make sure and give them plenty of room and don’t drive through their chum line or pull up and try to order a burger out of the galley.

The yellows are also biting in less heavily pressured areas if you’re looking to take advantage of the good weather and make a longer run. In semi-long run range, there are yellows biting on the front side of San Clemente Island but they aren’t very big. In the extra-long run range, there are Catalina grade yellows biting at Cortes Bank but you’d better jumping on a 1 1/2-day trip instead of trying to make the run in your skiff (yes I’m talking to you Brandon Vulgamott). Regardless of which of the islands you make a run for this weekend, I’d keep an eye out for tuna on the way. 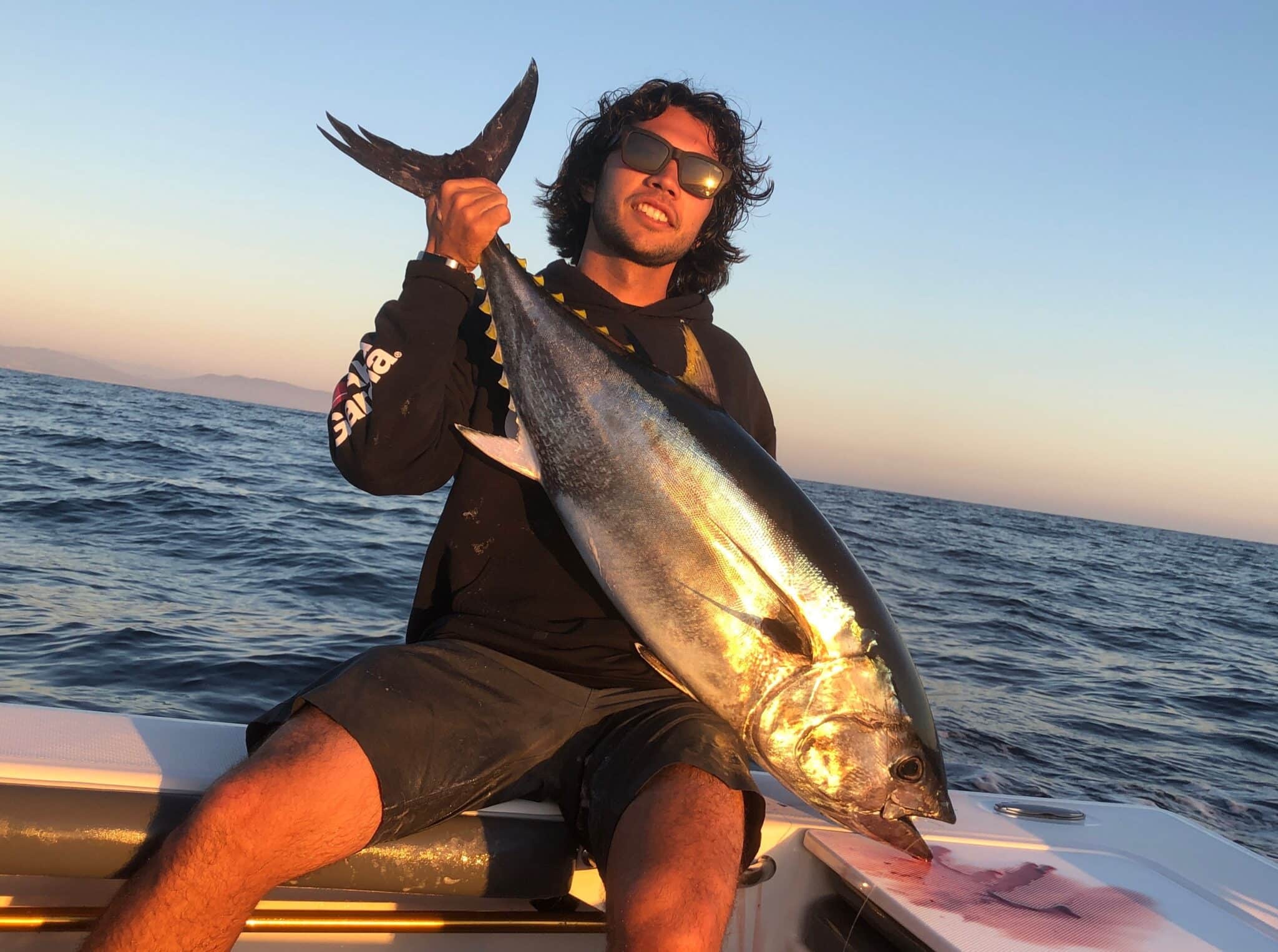 This bluefin is one of four that Jimmy Decker and his son Briggs caught on Monday afternoon while I was stuck in the office. After a slow day of bass fishing on Saturday and a fruitless day of deep-drop swordfish on Sunday, I was over it enough when Decker asked if I wanted to go look for tuna on Monday afternoon that I took a pass without even trying to rearrange my schedule. Well, Decker and his son launched out of Newport around 1:00 p.m. and by 5:30 I got a photo text of a bluefin on deck. That was followed by another pic with a second fish hanging and moments later another pic of number three. Before I could even set my phone down another pic came through with a pic of Briggs pulling on number three with another one hanging in the rod holder waiting to be wound in to make limits for the boat. As good as quick limits of 40-pound bluefin on a Monday afternoon is, getting them less than 8 miles from Newport Harbor made it just that much better. 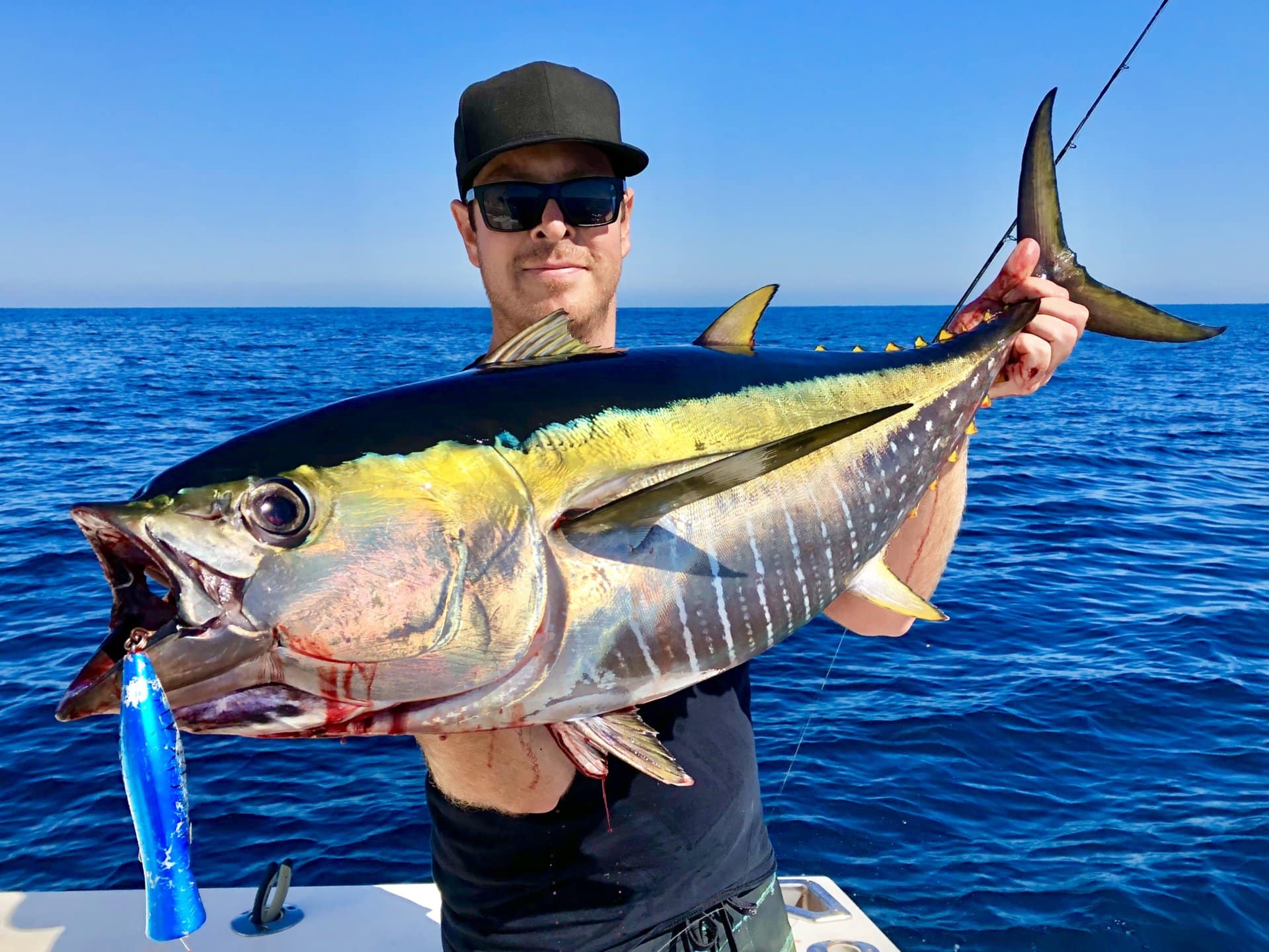 There are also some yellowfin tuna still swimming around near Catalina Island and as usual Jonathon Medrano was there to catch them. You can read his full report here. There are fish scattered around all over the place right now and they don’t seem to show up in the same place two days in a row so you’re going to have to look for them. Speaking of looking for fish, there have been quite a few boats deep-dropping for swords this week and another Southern California first happened on Wednesday aboard the “Seeker”. While deep dropping near Catalina the boat had double hook-up on swordfish and while they only landed one of the two, that’s a pretty amazing feat. It also goes to show that these fish will school up. That’s about it for this week. Good luck out there!