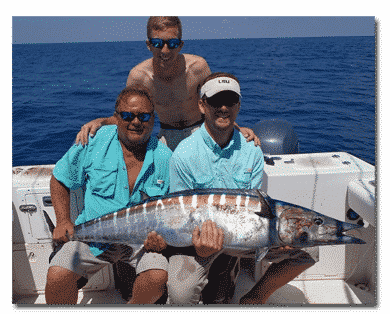 Wahoo are found in tropical and subtropical seas throughout the entire world. With their exceptional speed and firm, delicious meat, wahoo are highly-prized by fishermen everywhere.

Excellent wahoo fisheries exist in many parts of the world. The following are three of the most prolific places to catch wahoo, in no particular order. 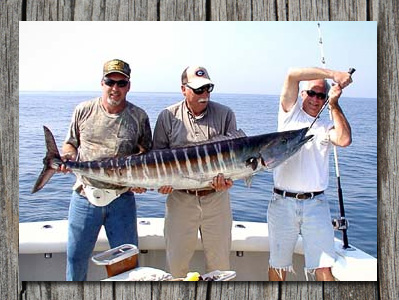 Every winter, a small armada converges on these distant, sparsely-populated Bahamian islands with the sole intention of catching wahoo. With undersea ledges that drop off sharply just off the islands, the area is a magnet for some of the largest wahoo in the world. The best time to fish these waters is between November and January.

Capt. Scott uses Ilander lures rigged with two or three extra skirts and three 3-ounce egg sinkers for extra weight. A 50-ounce trolling sinker rigged on 400-pound cable is used to keep the lure running at the right depth. “Using cable around the sinker is important,” he said, “because wahoo will sometimes hit the sinker 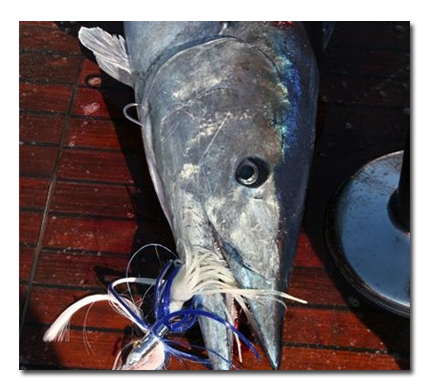 itself, and you don’t want to lose the whole rig.”

Capt. Scott generally trolls only two rigs, although he notes that some captains will put out an entire spread. Running the boat at 14 knots—the speed at which he’s gotten the most strikes—he zigzags along the ledge, trying to stay between 400 and 600 feet. He’s had the best success near Columbus Point off Cat Island.

Fish over 100 pounds are not uncommon. Sharks can be a real problem, though, and wahoo must be brought to the boat quickly to avoid being ripped to shreds. “It’s like the sharks are trained,” said Capt. Scott. “When you hook up with a wahoo, it doesn’t take long before the oceanic whitetips show up, and sometimes even tiger sharks.”

Capt. Ian McGowan of Apex Charters in Grand Isle, Louisiana regularly targets wahoo in the northern Gulf of Mexico. He often runs out to the “canyon” in about 1,000 feet of water where he fishes for yellowfin tuna, mahi mahi and other species, but wahoo are one of his favorite fish to target.

When fishing primarily for wahoo, Capt. Ian finds wintertime to be best. He fishes over natural salt domes and 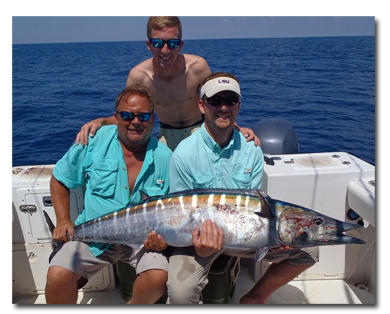 bottom structure—basically anything close to the shelf. “I like to see a ledge with current coming over it,” he said. “The current pushes up water and compresses bait in the water column. The fish will sit on one side and feed.”

Capt. Ian usually trolls diving baits or spreads of marlin lures. Big undersea “humps” seem to hold fish the best, but he also catches them around the oil rigs. “I look for clean water before I start fishing. It’s usually about 30 miles out.”

According to Capt. Ian, the wahoo fishing now is the best it’s been in many years. “My buddy went out yesterday,” he said. “On his first pass, he hooked four wahoo, and on his second pass, he hooked five.”

Aside from oil rigs and bottom structure, Capt. Ian also looks for floating debris. “Logs, trash, pallets, anything floating could hold wahoo. Five years ago, I came across a small bamboo pole. It had some baitfish on it, so we passed it trolling just one bait, and that got knocked down instantly. We went on to catch nineteen wahoo in one hour under that little piece of bamboo.” 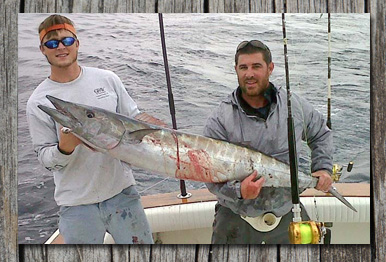 A deep-water ledge off the coast of Northeast Florida, roughly 70 miles offshore Jacksonville and St. Augustine, is a prime hangout for large wahoo. According to Capt. Allen Mills of AC Charters, the wahoo fishing is “jam-up” between January and April, with the peak season being February and March. His boat is appropriately called the Wahoo II.

“When we high-speed troll for wahoo,” said Capt. Allen, “we’re going over 9 knots. We use 50-wide reels that hold plenty of line, because when you hook up with a wahoo, you want to keep going and chances are you may get another strike.”

Capt. Allen usually trolls Ilander lures or Billy Bait lures. He rigs a trolling sinker at about 25 to 30 feet above the lure to help keep it running down in the water. His favorite color combinations for wahoo lures are red and black, or purple and silver. The average wahoo caught on the ledge is 40 pounds, but Capt. Allen has seen fish in the 90-pound range.

Although the occasional dolphin is also caught, the most common by-catch is blackfin tuna. “We put a cedar plug about a thousand feet back for the tuna,” he said.

What are your favorite places to target wahoo?

This variation of the Hawaiian fish preparation known as “poke” uses fresh wahoo and citrus juice instead of oil.

Capt Sean Bloomfield
After getting his captain's license at age 18, Capt. Sean Bloomfield worked at a remote Alaskan fishing lodge and then as a guide through his own char...