When it comes to serious offshore sportfishing, the convertible is a tough design to beat – if that convertible has what it takes to be a hard-core fishing machine.

We love center console fishing boats, outboard engines, express boats, and walkarounds, but if you fish purely offshore and have a budget that can handle the expense, a convertible sportfishing machine probably going to be your boat of choice. Convertibles have the beef to keep you as safe and comfortable as possible in big seas, their rumbling inboard diesels are excellent at raising fish, and their large stable cockpits are the ideal battleground for tackling bluewater pelagics. But all convertibles are most certainly not created equal. And while every boat has its strengths and weaknesses, the best convertibles do share some common traits.

The days of 20 knot cruises are long gone – thank God. To sit at the top of the heap, a modern convertible needs to be able to provide a 30-knot cruise, hopefully without burning so much fuel that the marina calls for a tanker delivery every time you pull out of the slip. But speed is only part of the performance equation. A top-notch convertible also need to be able to dance, responding quickly to opposed engines and turns of the wheel.

Seakeeping is part of the puzzle, too, and to enhance stability having a Seakeeper gyro-stabilizer belowdecks has become a must-have.

Beyond that, obviously, the best convertibles have a hull design that can smooth out rough seas. Each and every boat is different in that regard, and we’re not about to make any generalizations regarding transom deadrise, entry angle, flare, nor running angle. When it comes to how these details all work together, time on the ocean is the only way to properly judge a boat.

The best convertible fishing boats maximize strength while minimizing weight. In smaller boats minimizing weight can have adverse effects when it comes to seakeeping, but convertibles are nearly always large enough that they have the heft to crush waves, regardless of a relatively trim disposition. And as a result, many of the best convertibles are often still built with wood. There, we said it – even though many people will take issue with the claim. And while it’s true that there will always be problems associated with using wood as a marine construction material, it’s just as true that cold molds, plank-on-frame boats, and similar methods that combine woods like Okoume ply and Douglass fir with epoxy and fiberglass composites offer the ultimate combination of strength-to-weight ratios, as well as enhanced customizability. Just look at who builds boats like these: Bayliss, Jarrett Bay, Mann, Spencer, Weaver – the list goes on and on.

What about the likes of Viking, which builds molded fiberglass boats yet has somehow maintained its stature as other molded-glass convertible builders have faded from the spotlight? We certainly don’t want to make it seem like we’re selling their boats short, because Viking builds one heck of an awesome convertible. They’ve made it happen by constantly investing in the latest composite construction technologies, maintaining a willingness to customize their boats to a huge degree, and by keeping the vast majority of the construction and design of the boats’ pieces-parts in-house. So, in this case a molded hull can keep pace, but their success in the current world of convertibles is the exception, not the rule.

There are some convertibles on the water which have the DNA to be great fishing boats, but fall horribly short due to improper rigging or a lack thereof. You’ve seen ‘em – the 60 footer with no tower, no outriggers, and nothing but beer in the livewell. Fortunately this is a problem that can be fixed, but if you see a good deal on a de-rigged convertible, think twice before buying it. Adding these items to a boat can be a huge expense, and the number of companies that build towers is limited; you may miss your first season as you get the boat ready for action.

Here, we get down to the nitty-gritty. The first thing to consider is how much of the boat’s overall size is dedicated to cockpit space, versus cabin space. Sure, we all love that comfy salon, but some boats that are designed more for marketing than marlin have cockpits barely big enough for a mate and two anglers.

Next, consider how that space is used. Mezzanines are nice, and make hours of bait-watching far more bearable. But if you plan to travel or tournament fish, one of the compartments in that mezzanine had better house a bait freezer so you can make sure you have plenty of ballyhoo when all the local sources have run dry. Plenty of tackle stowage, an easily accessible drink box, and a stand-up rigging station are also nice to have. Most convertibles have a livewell in the transom, which works out great, but a surprising number have sub-par fishboxes in the deck. Some have macerator pumps (diaphragm pumps last longer), some have pump-outs that backflow raw water into the box while running, some aren’t insulated, and some have incredibly heavy hatches without gas-assist struts which could take off a toe. The best have integrated freezer plates or are plumbed to an icemaker, so you don’t have to haul hundreds of pounds of ice down the docks at four o’clock in the morning.

In truth, cabin layout is more a matter of personal preference than anything else. If you tend to run your boat to different ports and stay on it for periods of time, multiple private staterooms are in order. If not, you may prefer that more of the cabin is dedicated to salon space. Some people want a full galley, while other anglers could care less. Still, whatever cabin layout you like most one thing to make sure of is that rod and tackle stowage is sufficient.

Different captains prefer different style bridges; if you’re the social type, you probably want a large bridge with extra seating. Some other captains prefer bridges that offer a bit more peace and quiet. Either way, beware of seating next to the helm that forces the captain to move, every time someone gets in or out. Electronics flats should also be positioned for the captain’s convenience. And the bridge should also be designed such that the captain can see both the bow and the transom of the boat while standing at the helm. For those who are older or physically challenged, easy access may also be a consideration. 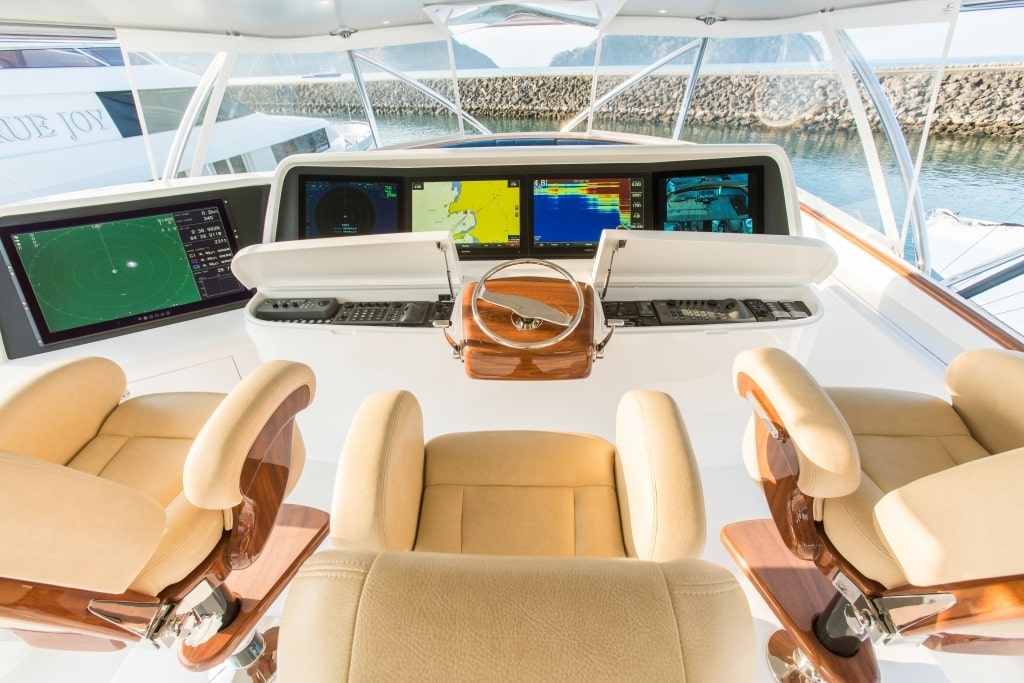 Although not visible in this picture, there’s room behind these chairs on this Jarrett Bay 90 for people to pass through. That’s smart, because when an arrangement like this backs up to a rail, the captain will have to move every time someone wants to get in or out of the port-side chair.

Of course, there are a million other minute details that come into play. Are the rocket launchers positioned correctly? Does the generator have enough oomph to power all the systems? Is the air conditioning zoned throughout the cabin? Does the boat have a digital switching system?

On boats as large and complex as convertibles there’s certainly a lot to look for. In order to be one of the best, however, these significant traits – performance, construction, rigging, and cockpit, cabin, and bridge layouts – must be accounted for.