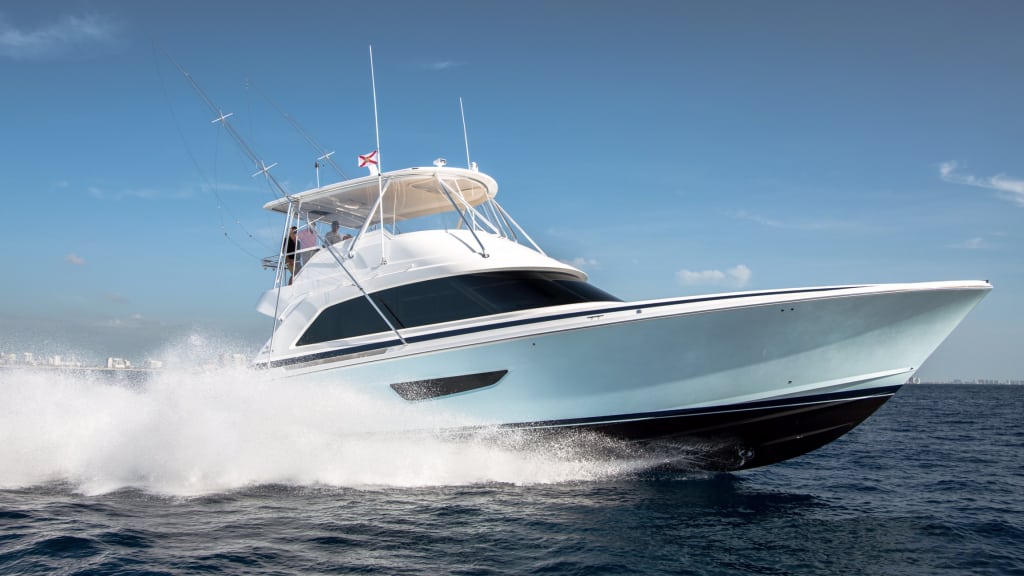 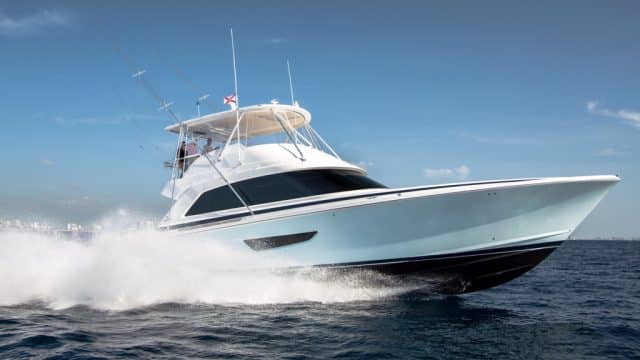 When it comes to convertible fishing boats, the marketplace has changed radically through the past decade. There used to be numerous production builders, with brands like Bertram, Cabo, Davis, Egg Harbor, Ocean Yachts, and Viking, each garnering their own niche. But many of those famous names are now gone, and Viking seems to be the only builder molding fiberglass hulls and selling models of 40-feet and up with consistent success, while custom builders grew to dominate much of the market. Bertram – a legendry manufacturer if there ever was one – has hung around at the periphery, building boats here and there and being bought by the Ferretti Group. Three years ago, however, Beniamino and Gruppo Gavio acquired the company and pledged to “rebuild Bertram in America.” A year later they hired Peter Truslow (the guy who made Edgewater Boats what they are today) to become CEO. Shortly thereafter they launched the headline-grabbing Bertram 35, and this fall they’ve splashed hull number one of the new Bertram 61. 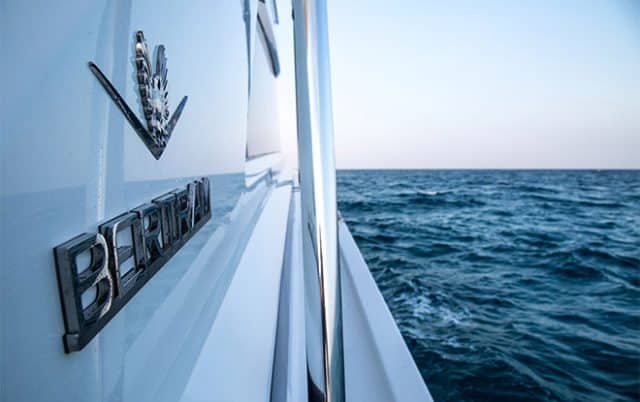 The first thing that grabs you when seeing the Bertram 61 is the fact that the builder managed to retain the classic Bertram look, while also gaining a modern appeal. The boat has the same angular break in the sheer aft of the bridge that predated Ferretti ownership, and the side saloon windows of recent large Bertrams has been replaced with a wrap-around window. The flybridge brow and cockpit overhang, meanwhile, bring some curves into the mix. As to whether or not you like the styling, well, beauty is in the eye of the beholder. Fishability, on the other hand, is not.

One common beef among die-hard anglers was that so many of the production-built convertibles of yesteryear had a compact cockpit tacked onto the back end of a massive cabin. It was a valid complaint, and many “sportfishing” boats had misplaced priorities. But one glance at the cockpit on the 61 erases any fears that Bertram fell into that trap with this new model. 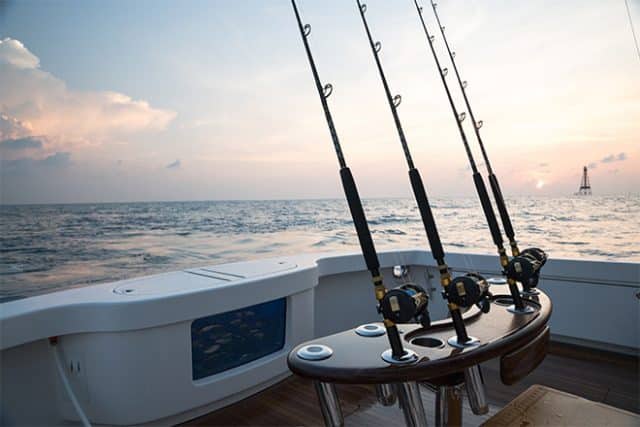 Starting at the transom, you’ll find a huge center double-hatch oval livewell, with a forward viewing port and a baby-blue interior. Then take note of the rather massive fishboxes in the 188 square foot cockpit, which are large enough to stretch out and nap in. There’s room for improvement here in that the hatches are very heavy and difficult to swing open, but the rep on-site said that he believed the gas-assist struts were going to be upgraded to eliminate the issue. Side inwale boxes hold your mops and gaffs, and then there are two steps up to the mezzanine. In a nod to modern convenience the starboard-side cockpit unit houses a built-in electric grill, while the port side units are dedicated to housing the ballyhoo. The cockpit layout and outfitting is, of course, customizable to a degree. If you’d rather have a bait freezer here or a box plumbed to an onboard Eskimo ice maker there, it won’t be a problem. 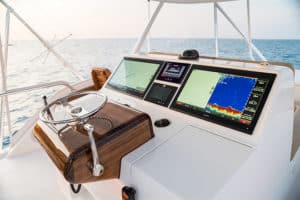 One other nifty perk we found in the cockpit of hull number one was the presence of an MFD, mounted in the port-side wing by the mezzanine seating. It’s always fun to watch the fishfinder while you’re on the troll, and since the boat’s electronics are fully integrated you can also pull up anything from the engine data to the chartplotter.

Caviar in the Cabin

Okay, the 61 doesn’t come with caviar as standard equipment, but it should – that’s the immediate feeling you get upon entering the cabin. The boat’s salon is full of natural light thanks to the wrap-around windshield, and when you combine it with the aft windows and door, provides virtually 360-degree views. Wood-grains in the cabinetry is book-matched, the table and bar stools gleam with varnish, and the use of light-colored fabrics, a white overhead, and white marble countertops makes the entire space feel bright and modern.

Down below there’s a center full-beam master and a guest head forward, both with private heads, and a smaller guest stateroom with twin berths that connects to the day head. Behind a pair of doors in the companionway, you’ll find a washer/dryer and extra stowage.

One thing that jumped out at us in the cabin: the boat is built with the ruggedized attitude of the Bertrams of yesteryear. On some big boats you’ll find surprisingly flimsy doors, hardware, and furnishings. As long as everything looks great, why spend the extra bucks on materials designed for heavier use, right? 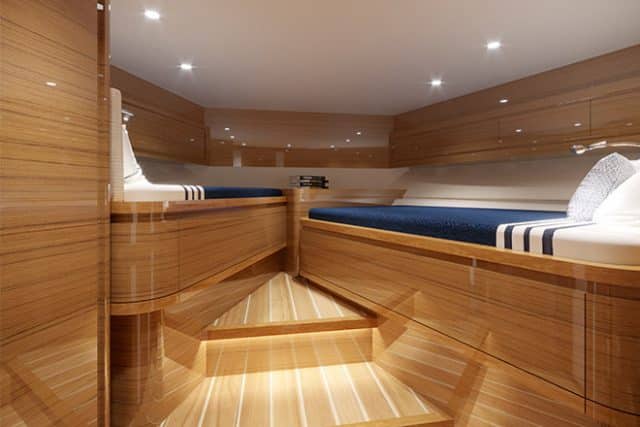 But as we all know, over time everything aboard a boat of every size gets stressed, overworked, and often abused. So we loved it when we slammed the doors and instead of vibrating the doorjambs, they shut with a solid “thunk.” We loved the thick stainless-steel latches. And we loved how the cabinets surrounding the guest’s queen berth firmly clunked closed.

A rugged build was something Bertram has always been known for, and it’s not just evident on the interior but also carries through to the boat’s heart and soul. The new 61 is vacuum-infused with vinylester resin – both the hull and the deck – and the keel and strakes are Kevlar reinforced.

Get Ready to Rumble

One more area of the boat you’ve got to check out, especially if you’re going to be the captain: the flying bridge. Bertram made a fascinating maneuver up here, one we’d wager will be quickly copied by other convertible builders. Rather than put the usual L-shaped or C-shaped seating forward of the helm station, there’s a large forward-facing lounge reminiscent of those found in front of the console on many of today’s high-end center consoles. 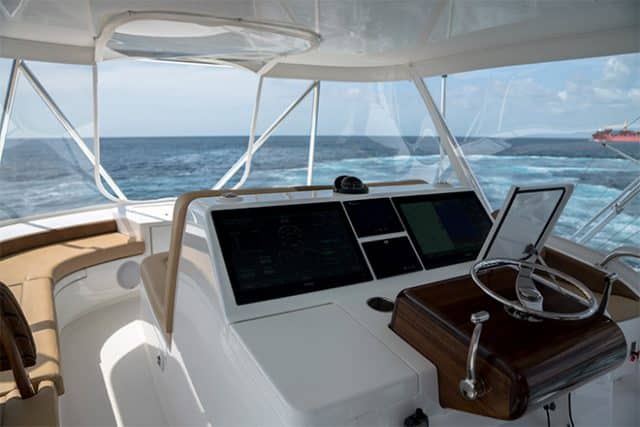 It’s flanked by a pair of lounges to either side which have reversible backrests that can face either forward for the ride or aft to watch bait. The layout turns the entire bridgedeck into a social area similar to the ones found in the bow of the Grady-White Canyon 456, or the Scout 420 LXF, which adds a whole new dimension to riding up top. 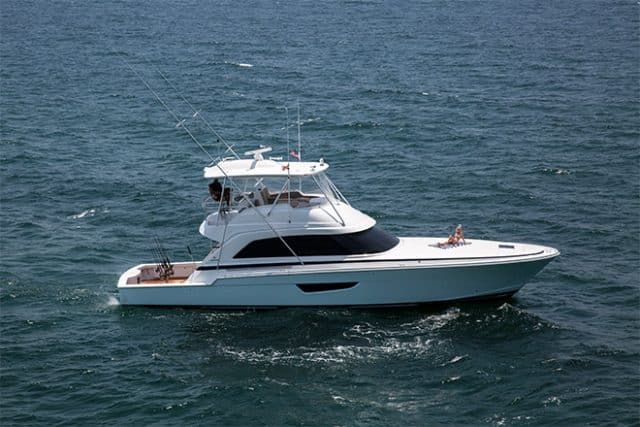 So: will Bertram take the convertible sportfishing world by storm, with the new 61? Time will tell. But we’re certain of one thing: Bertram is, in fact, back.