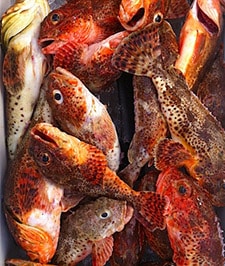 This is the 170th article I’ve written for BD Outdoors. Is the number significant? Not really. In fact, I wouldn’t have even know how many I’ve written had I not saved the file of my first So Cal Scene as “SCS_1” and just kept going from there. So why am I even mentioning it? Well, for the first time in at least 100 articles there is no current fishing to report; an usually rainy week took care of that. I also just realized that the good fishing we’ve had during that time has kept me from writing about an important subject for far too long.

In case you haven’t noticed, the majority of the people in the great state of California don’t care about fishermen. In fact, they don’t even realize there’s a subculture of outdoorsmen hidden within their otherwise homogenized metropolitan existences. That’s fine with me. The only downside is the occasional condescending look I’ll get from some PETA-inclined douche bag that tried to make conversation at a dinner party by asking what I like to do in my free time.

The real problem is the powerful, and very well funded, minority who don’t like fishermen. It doesn’t matter if it’s the NRDC or Western States Petroleum pushing through the MPA process to further their own agendas, or a celebrity who doesn’t want to have to look at fishermen while sitting on the deck of their beach front home. These people want us gone and the bad news for fishermen is that this minority has the ear of the majority who don’t care and they’re telling them that we’re bad people.

So, what does this mean to us as fishermen? Well for starters it means that we really need to stop giving them weapons to use against us.

Throughout the entire MPA process the overwhelming theme of comments coming from recreational fishermen fell into one of two categories. The first was the ever popular, “We’re not doing anything wrong, there’s plenty of fish”. If that didn’t work, the follow up comment was usually, “We’re not doing anything wrong, it’s the commercial fishermen’s fault”. As was made clear by the massive amounts of closures that were handed down, neither denial nor the blame game had the desired effect.

The reality is that it doesn’t matter that we’re not doing anything wrong. Nor does it matter if there’s plenty of fish or if it really is the commercial fishermen’s fault (which it’s not). The only thing that matters is how non-fishermen perceive our actions. To put it plainly, just because fishermen have been doing the exact same thing for decades, doesn’t mean that those actions will be deemed sustainable under the close scrutiny the fishing industry has been given in recent years. Before I get into the sport fishing end of things, I’d like to clear up a commonly held misconceptions about commercial fishing. Squid fishing has been going on for a very long time in California and for a very long time sport fishermen have complained about it. Common complaints included: they’re catching all of the squid before it gets a chance to spawn, they’re catching seabass in the nets too and they’re destroying the squid habitat by dragging their nets on the bottom.

Well, according to my friend Tom Brinton, who owns the Long Beach Bait Company and its associated commercial squid operation, that’s just not happening. “First off, we’re not catching all the squid. We’re actually catching very little of the biomass. Squid only live for about a year and die after they spawn, so if we were overfishing them it would become apparent the next year because there wouldn’t be any squid. There are strict quotas in place to keep us from catching an unsustainable amount of fish and that’s why the squid population is as strong as ever. Also, we don’t wrap seabass or anything other than squid, we aren’t allowed to sell it so why would we do it? Finally, the argument about destroying squid beds is false as well. We catch squid in the same spots year after year, so we’re obviously not ruining our spots with the net.”

The reason I shared this example is to highlight how perception can be different than reality. Sport fishermen see commercial fishing from the outside and assume that it’s bad because they seem to be catching a lot of fish (or squid in this case). On the same token, non-fishermen look at sport fishermen and assume that we are catching too many fish.

The biggest difference is that the commercial fishermen are willing to work with fisheries managers to find a sustainable balance, while all sport fishermen ever seem to do is to deny the need for quotas and complain about any restrictions that come along. Don’t think I’m getting on my soap box or pointing fingers. I’ve always lead the charge when it comes to denial and anger about fisheries management decisions. I’m just saying that I’ve finally realized its not working.

So, how do we define a sustainable balance in sport fishing?

I honestly have no idea and given the diversity of the sport, I don’t think anyone has enough data to draw a definitive conclusion.

This is where the perception, I mentioned earlier, comes into play. If we want sport fishing to flourish, we’re going to need to change our attitude as well as our fishing practices. This article is not intended to admonish sport boats. I am only using them as an example because their fish counts are what drive many fisheries management decisions. It might be the lack of fish in the counts, like the low bass counts that lead to last year’s changes in size and limit regulations. Other times it’s the excessive fish counts, like when the sculpin quota was exceeded this year and the fishery closed (almost the entire 117 ton quota was caught by sport fishermen). I understand that sport boats are just doing what they can to get by in this tough economy, but it’s important to remember that the counts are being closely monitored by people who don’t like what you’re doing. So when the fishing is good it’s important to not appear greedy. Take this year’s yellowtail bite at San Clemente Island as an example. Some boats were getting scores of 50 to 100 big fish in the morning and then going out and filling their limits with rockfish in the afternoon. No matter how you justify it, that type of fish count just doesn’t give the perception of sport fishermen interested in managing their fishery in a sustainable manner.

Private boaters are guilty as well. Did anyone notice how the lobster fishing in Long Beach Harbor went from wide open and all big ones when it first started to tougher fishing with smaller bugs since then? Trust me, the fisheries managers noticed too. With the help of your lobster cards they were able to see just how much impact hoop netting had on virgin ground that’s closed to commercial fishing. I’m guessing changes to trip limits and yearly per angler quotas will be coming down the pipe in the near future.

In the end, any consumptive fishing activity is going to be frowned upon by the powers that be in California. I don’t like it, but I’ve realized that by fighting back we’re only making it worse for ourselves. The only real solution is to be proactive by taking an honest look at what we’re doing as fishermen and asking ourselves if we truly believe that our fishing practices seem sustainable. If they’re not, we need to change them regardless of what the current law allows.

On a brighter note, come March 1st we’re going to be allowed to fish rockfish in deeper water again.

We regained the extra depth because sport boat captains and crews proved that they were willing to use rockfish descending devices to safely release cow cod and over limit rockfish. While that ten fathom increase from 300-feet to 360-feet might not seem like all that big a deal, it sets a precedent that fishermen can win if they’re willing to work within the system and change the perception of what it is we do.