Two weeks ago, the Toronado went out to the Tanner Bank on a day and a half trip looking for bluefin tuna.  Capt. Ray Lagmay found them and they put 12 on the boat.  They had live squid and the fish responded well to it.  Twelve is a good number considering the boat pressure and how these ultra finicky fish are responding to that pressure.

That wasn’t the big story though…

Out of nowhere a school of seabass showed up and stuck to the boat.  Galley boss, Kevin Martin, told me that the school stayed with them from about 8am to past 11am and bit everything (including 80 lb!).  It was that good.  They limited for the boat with fish up to 50-pounds (below). 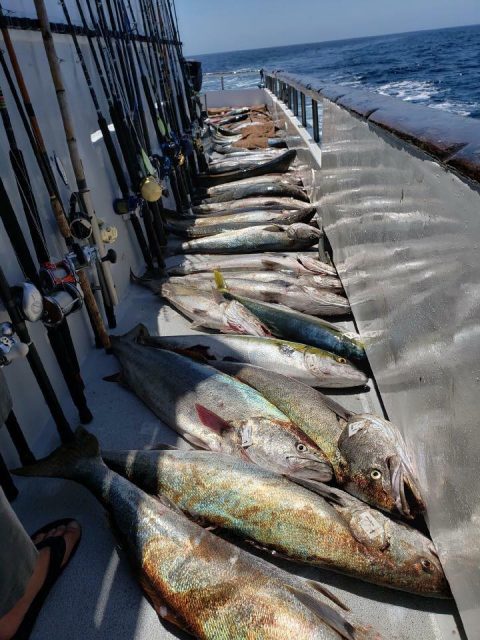 I’m not one to chase counts, but it’s pretty late in the season for seabass and I haven’t gotten one yet this year.  I got on the boat Thursday night fishing Friday.

Much to my surprise, Ray was advising us to rig up the big flatfall for the big bluefin.  Wait what?  I came prepared for seabass and got caught with my pants down.  Kevin let me borrow his wife April’s rod that she left on the boat.  I didn’t end up getting bit, but lesson learned.

As I mentioned in my article last week, we fished bluefin in the morning, rockfished after that, and finished the day on the kelp line of San Clemente for bass and yellowtail.  On the way home, we kept an eye out for signs of fish in the off chance an opportunity presented itself.

That’s a lot of different kinds of fishing in one day!

Typically, a count of tuna mixed with bottomfish and bass is unusual.  These kinds of counts aren’t limited to the boats fishing Clemente and the other local islands though.  I’ve noticed it on some San Diego based boats too.  They hit it offshore and if they have time left, they might give the Coronados a look (provided people have their passports).

I was on the boat again last Friday (August 17th) with my friends Nick Lam and Tim Shiau.  Similar gameplan to my trip the week before, except we skipped rockfishing and went straight to the kelp after the morning bluefin bite window expired.  We ended up only getting one fish that went about 60-pounds…even without its tail.

I definitely felt better prepared for the trip this time around…AND I managed to do it keeping to 5 rods and 6 reels.  Flexibility is the name of the game.

Let me give you an example.  My favorite rod in my whole arsenal is my 9 ft. Teramar (OG Brown, rated 15-30#) swimbait rod.  I didn’t bring it.  Instead, I opted to go with a slightly heavier Turner’s Californian Tri-Flex rod rated 15-40#.

During the bluefin portion of the trip, I paired the rod with a Lexa 400 (power handle) spooled with straight 65# braid, to a short topshot of 50# fluoro, terminated to a 100-gram colt sniper.  It felt better to have the extra spool capacity and slightly heavier rod for tuna.  I didn’t end up using it on bluefin, but when we happened on a foamer of what turned out to be large bonito, it was just the ticket.

The bass fishing ended up being the best part of the day.  Normally, I like to pair the swimbait rod with my Tranx 400.  I brought the reel and put it on for the bass.  The bait was the smaller grade 3-4″ sardines that are typical up and down the coast right now.  It would have been difficult to throw the small bait and get the required distance without the smaller reel.  With the right gear and careful bait selection though, the fishing was pretty automatic.  Conditions were there to get an easy limit.  Had we rockfished, I would’ve put the Lexa back on for the greater spool capacity (and ease of the power handle).

Flexibility…keep it in mind as you’re working through the potential scenarios and putting together your gear.  Make sure you have different weights of fluorocarbon to extend the flexibility of your bait setups.  Bring a variety of hook styles and sizes to accommodate different baits.  Understand that the fishing is pleasantly unpredictable right now, so be ready for anything.