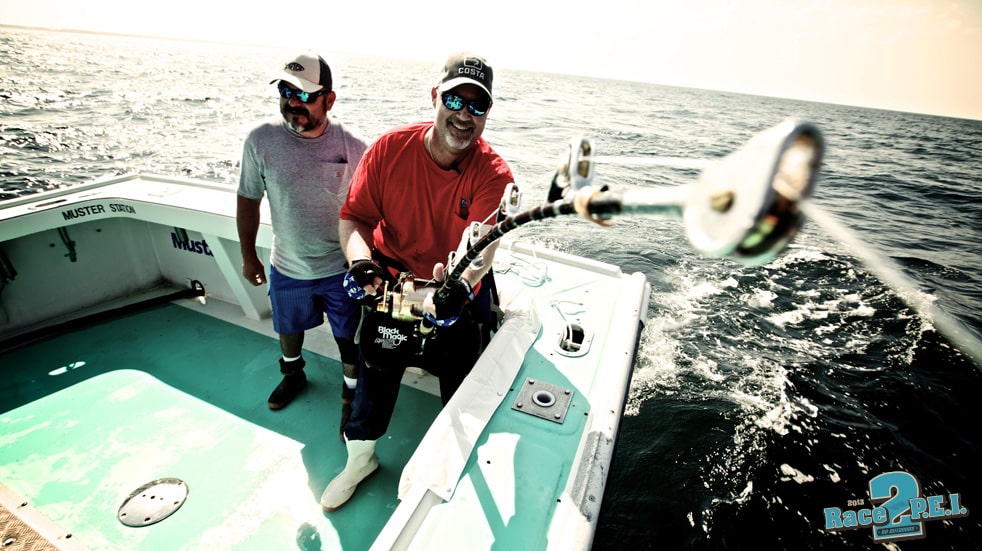 Battle With A Giant 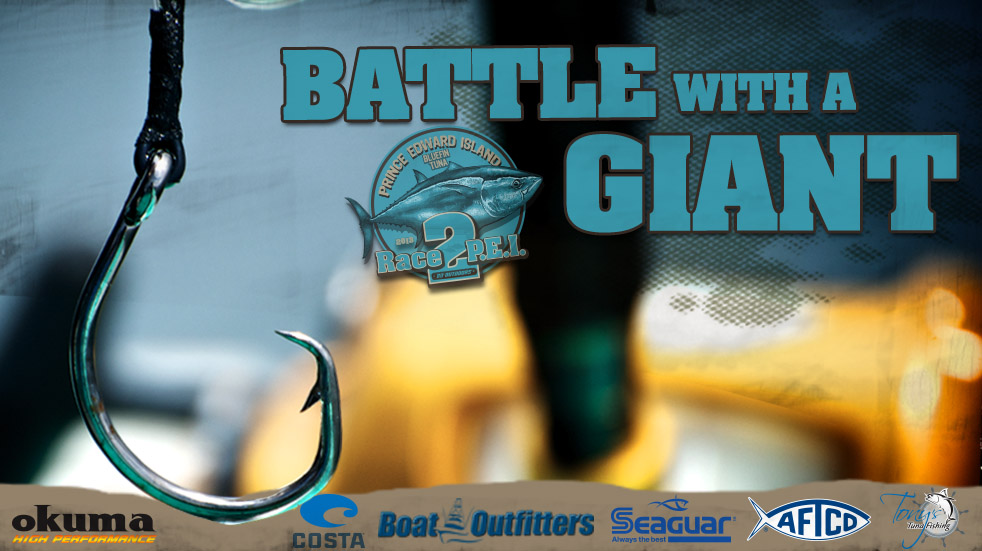 If you have ever been asked “what is the biggest fish you’ve caught,” and felt too bashful to reply, then chances are you probably know what it’s like battling giant tuna. 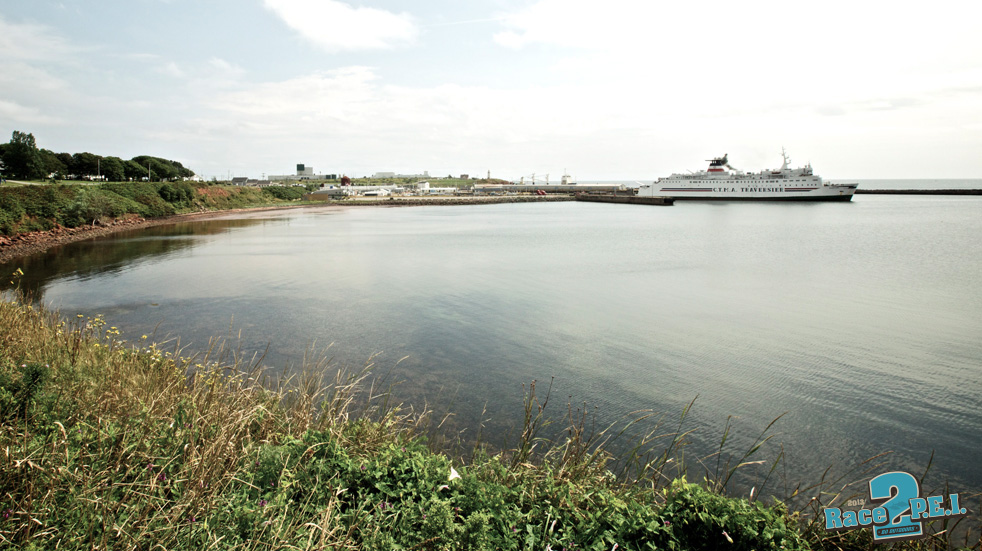 Seemingly a quiet sea-side farming community, this place is hiding a big secret. Giant bluefin tuna, that is, and they are lurking in these fertile waters, gorging on herring and mackerel. 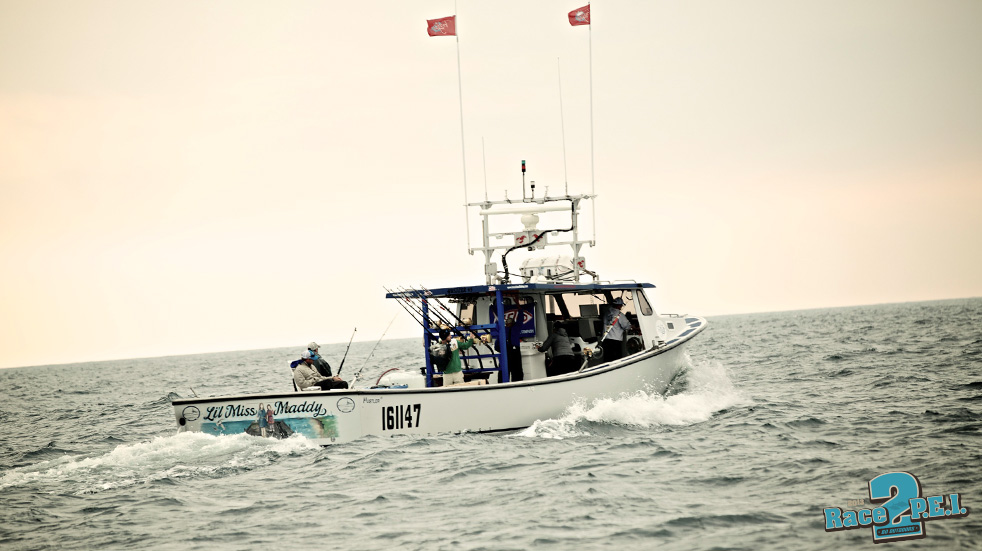 Life on the sea is just a part of living for Tony MacDonald and the crews of Tony’s Tuna Fishing charters. The BD team joined them and brought Race to PEI winner, Gilbert Saucedo, along to catch a giant. 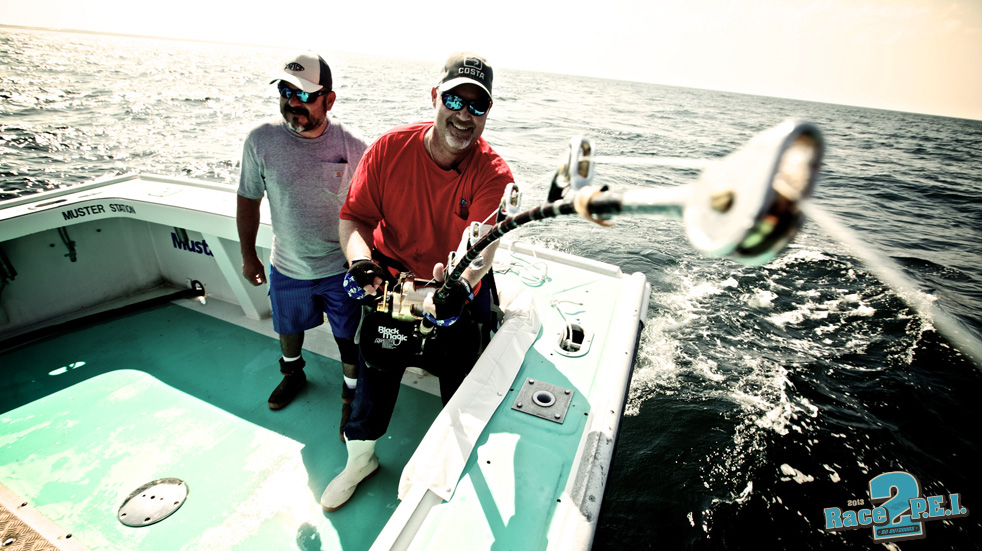 Thrill seeking comes in many forms. I’m not one to climb the hill of a roller coaster, but strap me to a giant tuna and I was happy as could be. This is not your normal fishing situation, but I feel lucky to have been a part of it. 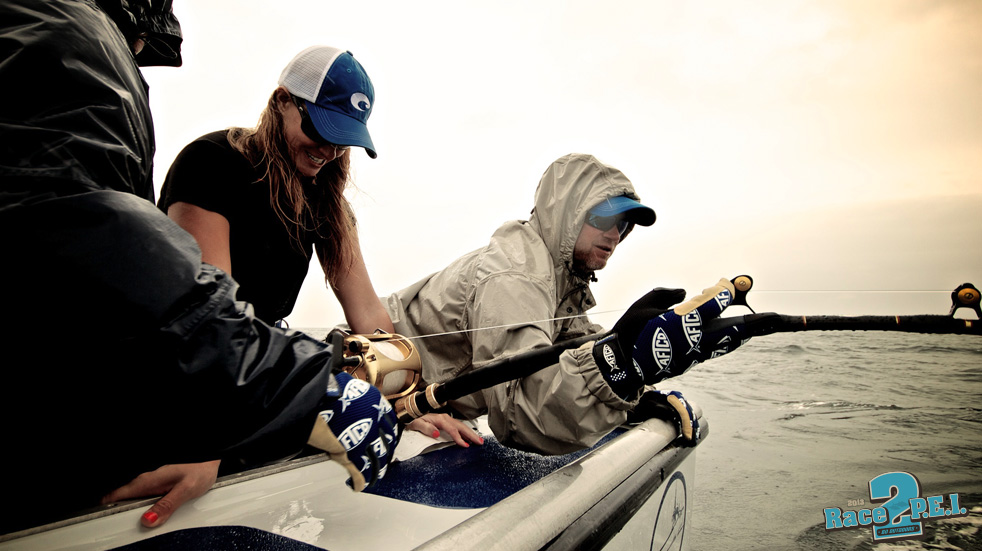 Hooked in water as shallow as 80 feet, these fish are notorious for turning what you thought was a fight almost won, into a fight that just started. 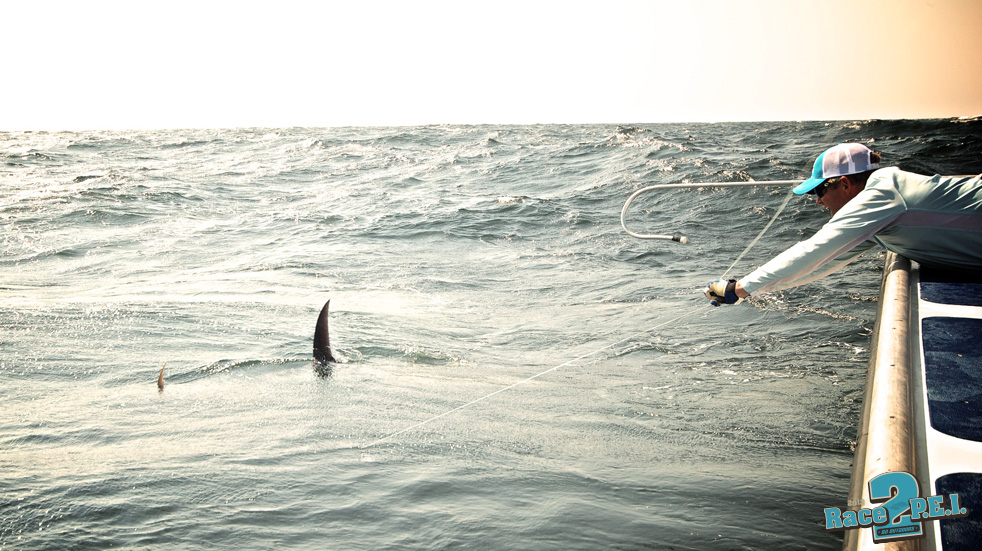 Making it a yearly habit, BDOutdoors’s Brant Crenshaw has a reminder in his calendar that reads something like “reach out and touch a giant.” Fish of this size must be treated with respect and caution because they are way stronger than we are. 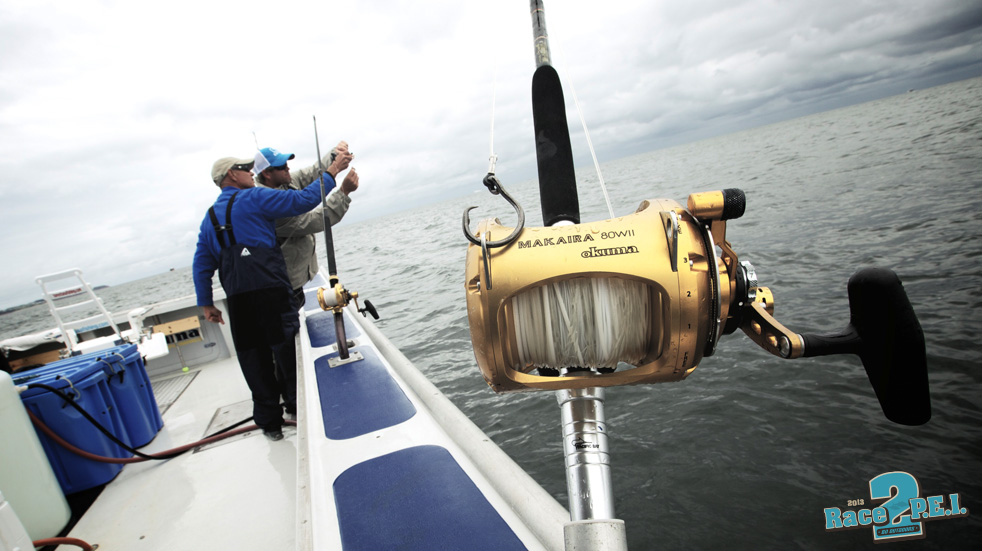 We caught live mackerel for bait each morning and then put three out. One dangled from a kite while two drifted as a long a short flatline. 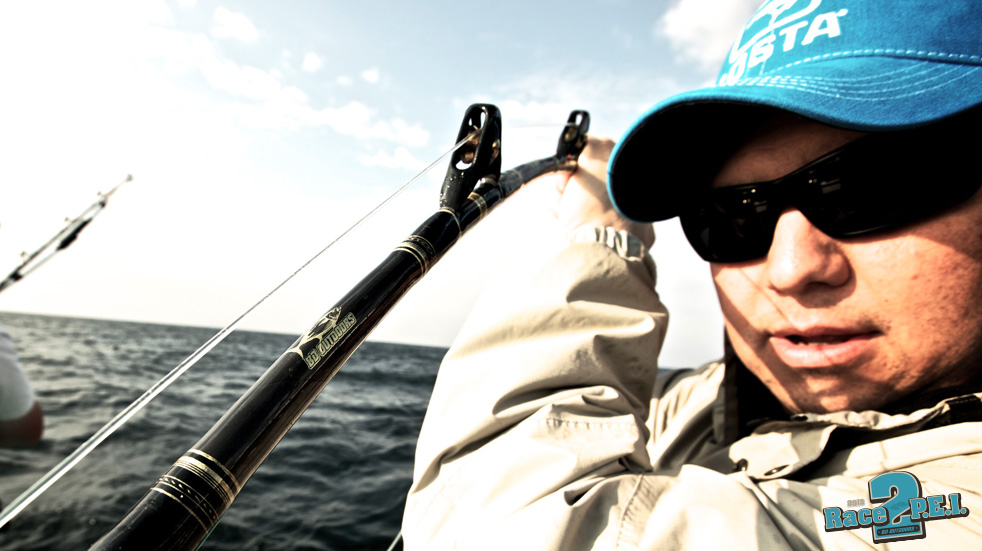 Preparation is key when battling big fish. Jason is putting some test pressure on the rod while the harness is pre-adjusted to each angler, before the fight. 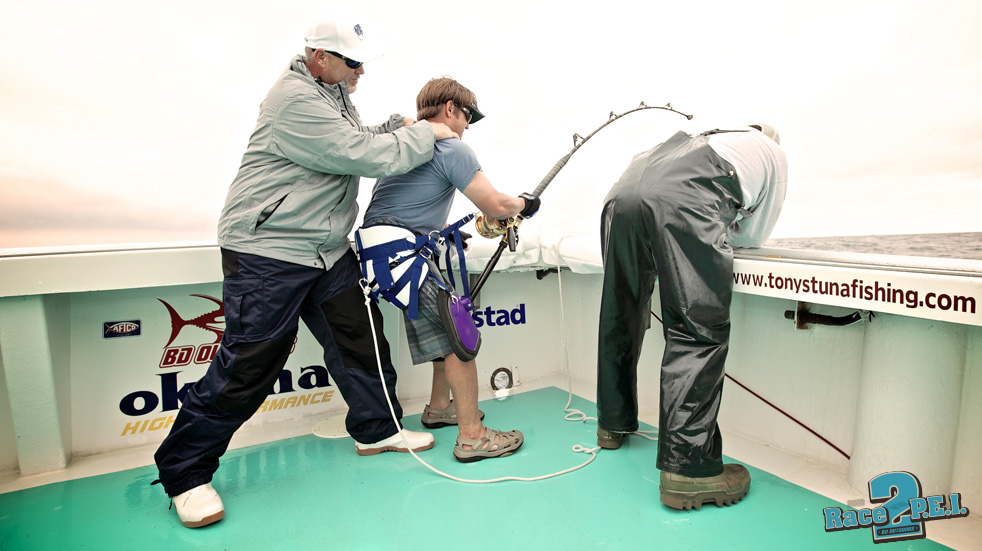 One of the extra challenges we faced with our choice to use standup gear was to remain steady and planted on the deck despite the motion of the boat and the extreme pressure trying to lift you off the deck. 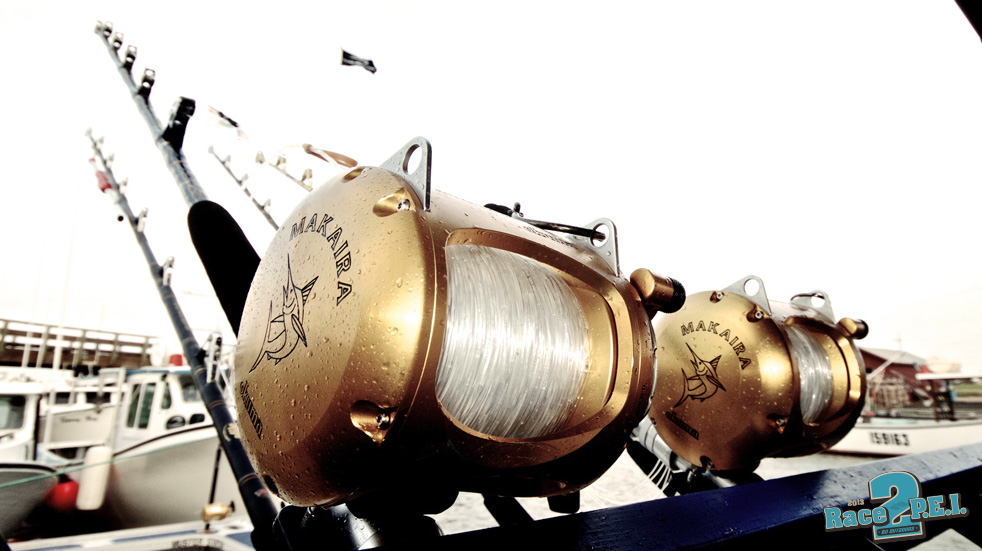 Okuma Makaira 80w, the reel of choice of Tony’s Tuna Fishing. Not too many can hold up to this kind of workout day in and day out. Very Impressive. 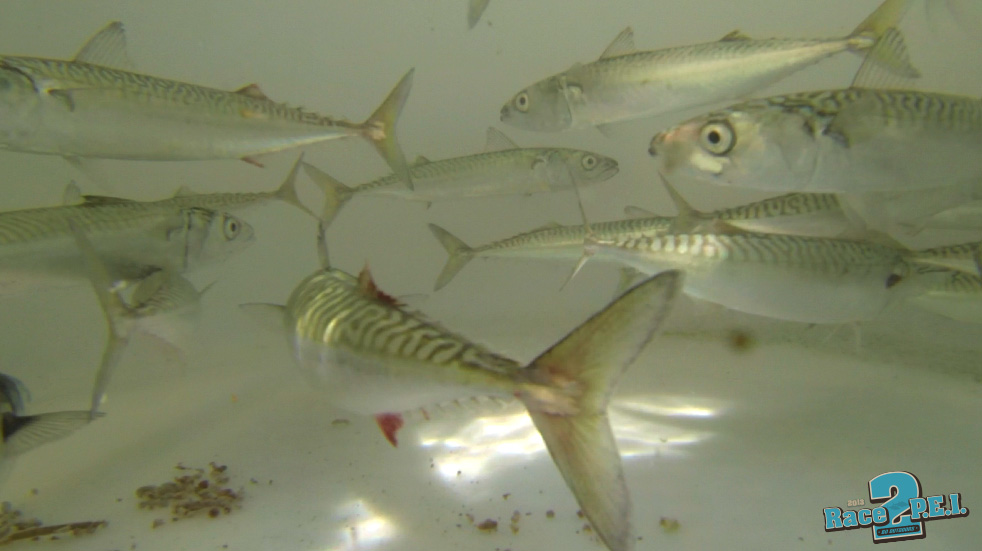 Would not want to be in their shoes: these live mackerels are the target of the bluefins enormous appetite. We were just “matching the hatch” so to speak. 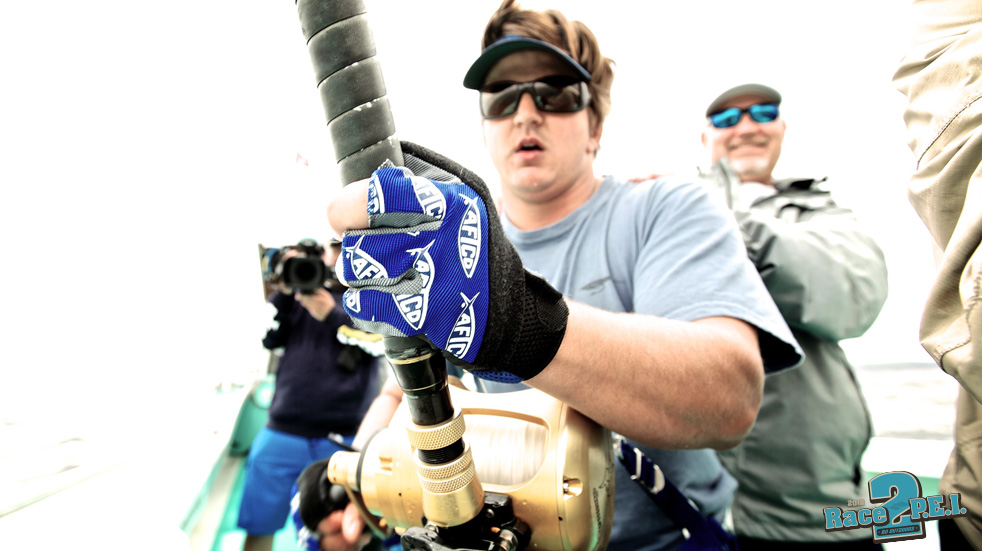 Mike Torbisco, our camera guru, turned out to be a fishing guru as well. He whipped a 550 pound bluefin in about forty minutes. The gloves help your grip and reduce blistering during the intense struggle. 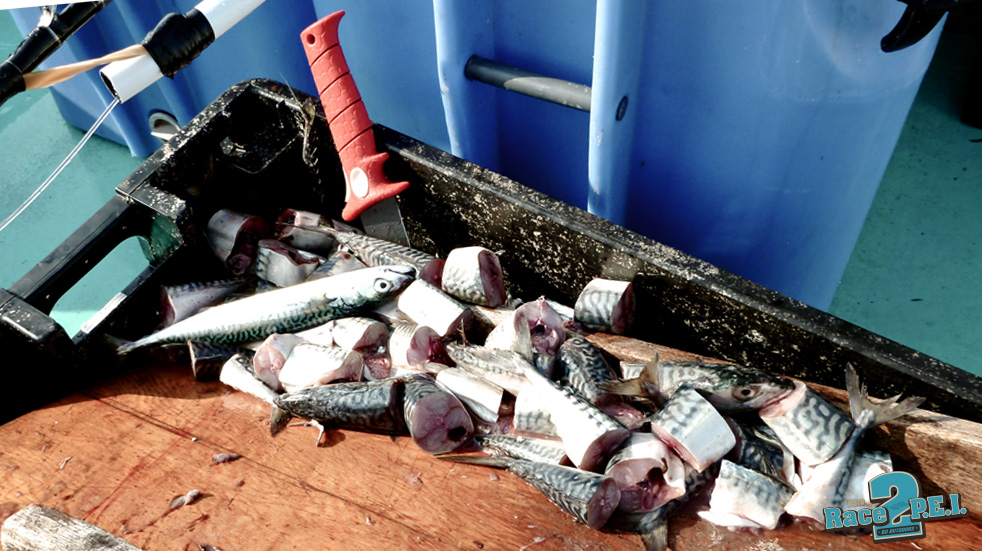 The crew brings fresh mackerel to cut into chunks and chum while we drifted. The goal is to lay down a scent trail that will lead the searching tuna to our baits. We kept a steady trickle of pieces going overboard during the day. 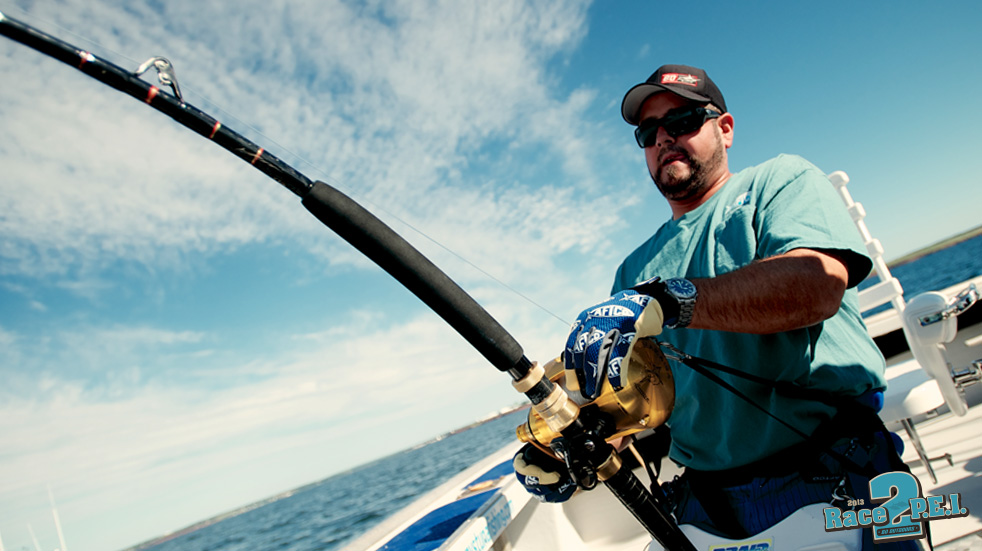 No stranger to battling big fish, Ali Hussainy proved that technique is key to tiring the fish and conserving the strength of the angler. Don’t fight the gear, it’s as much about timing your effort to the fish’s actions and the motion of the boat. 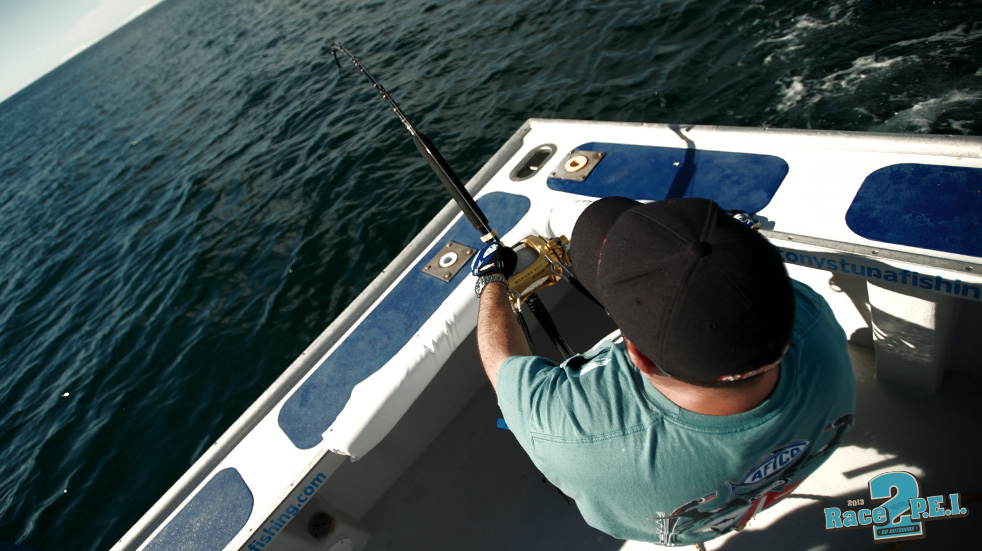 One thing to remember in a fight like this is to never take a hand off of the rod or reel. Even though the pressure is being held by the harness, if the line were to break, the recoil will send the rod into the face of the angler. I have seen it leave permanent scars. 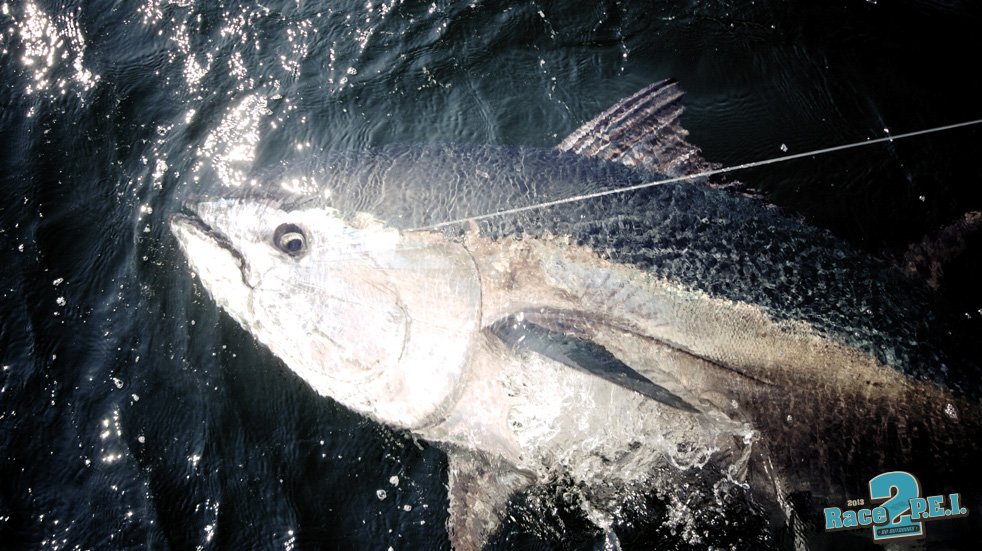 The laws require the bluefin to be released quickly so as not to fight them to the death. We were using 200 pound braid with a topshot of 200 pound mono. The Okuma 80’s were set at about fifty pounds of drag, which we would bump up near the end of the fight. 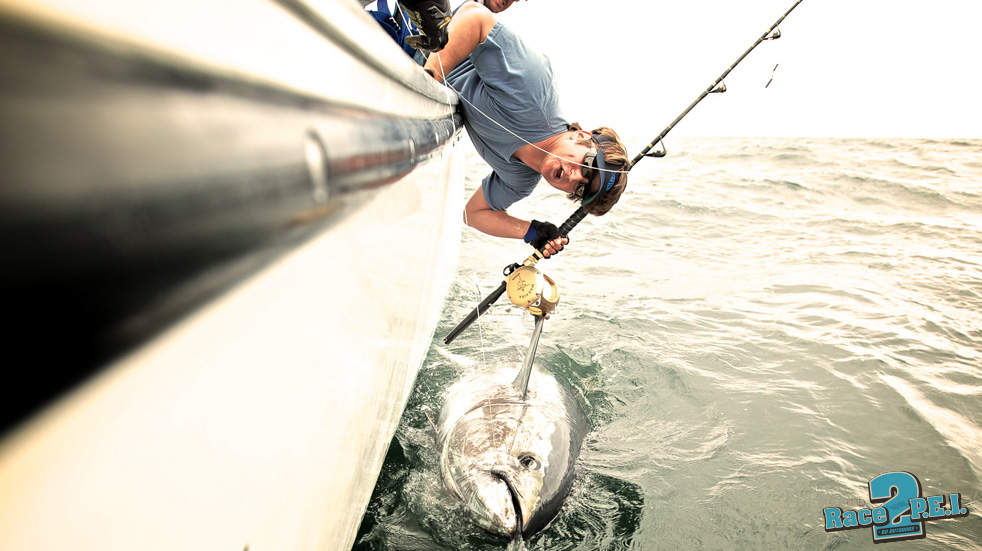 The bluefin are brought along side the boat which has a ruler on the side of the hull to get a length measurement before the leader is cut close and the fish swims away for another day.

Giant Bluefin on the Surface 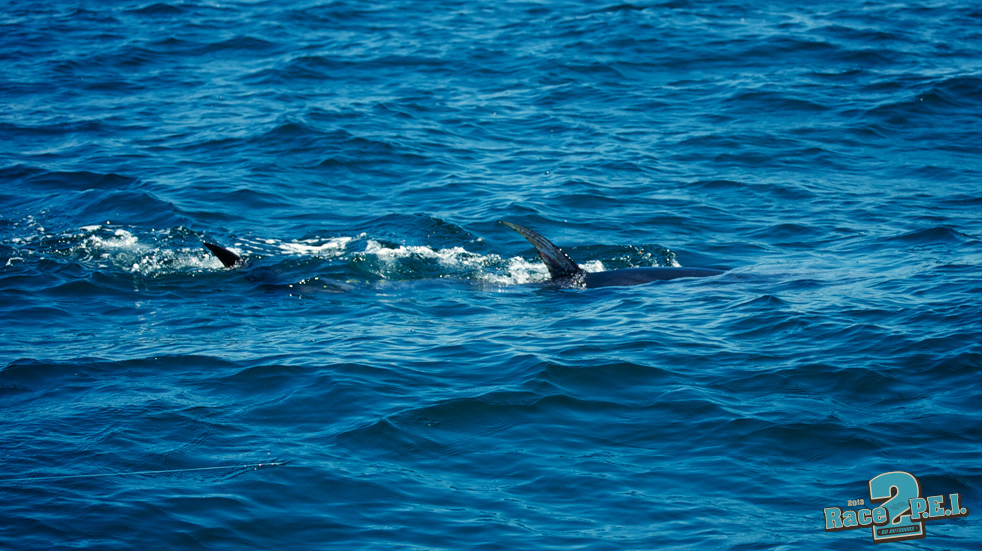 The tuna have several tactics they use during the fight. Some stay near the top and are more erratic in direction, while others dig down deep and make big circles. This is the one that hurts the angler the most as the pressure is straight down. 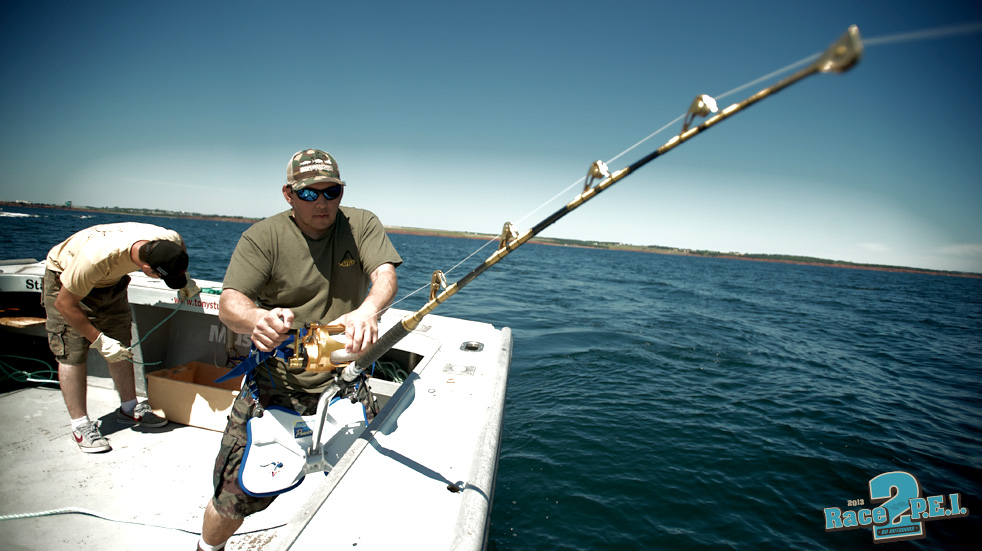 Jason Hayashi battles a giant. There is a safety line attached to the angler, who is strapped to the reel. I’m sure its just to save the rod and reel. 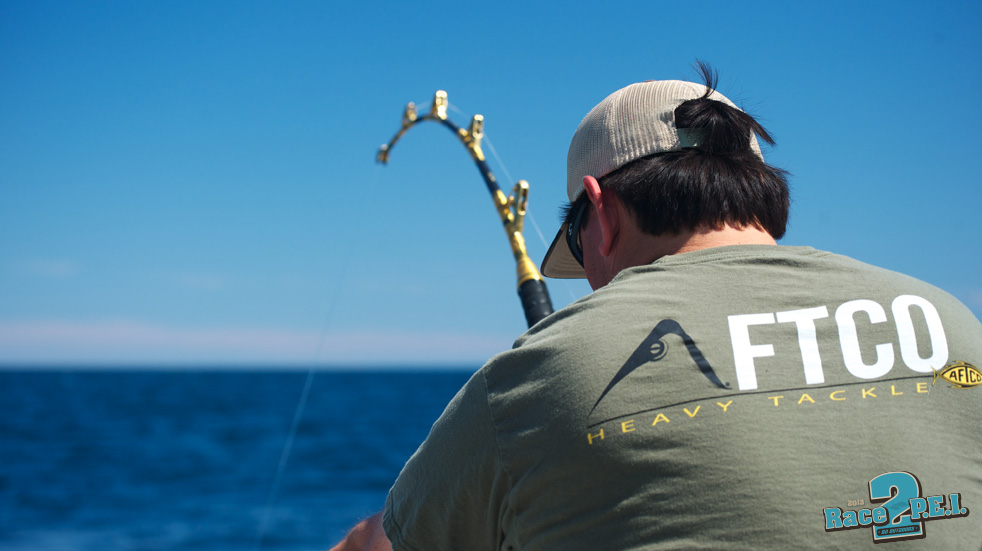 Only with quality equipment can you apply that much pressure between a fish and an angler and expect everything to hold up. Fifty pounds of drag will find the weak link if there is one. 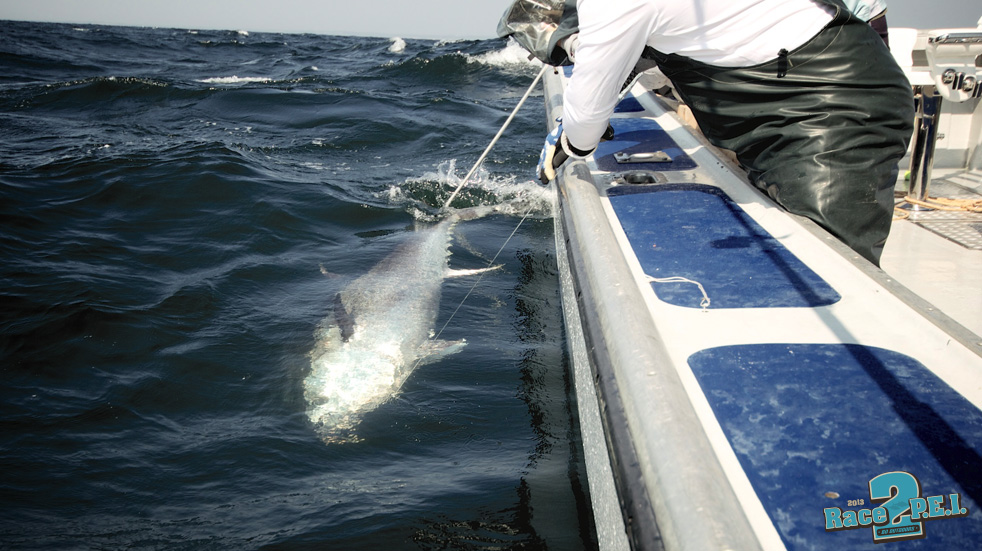 Tony’s crews use a large blunt hook to cradle the tail of the tuna while it is being released. Sometimes this is quite a challenge. 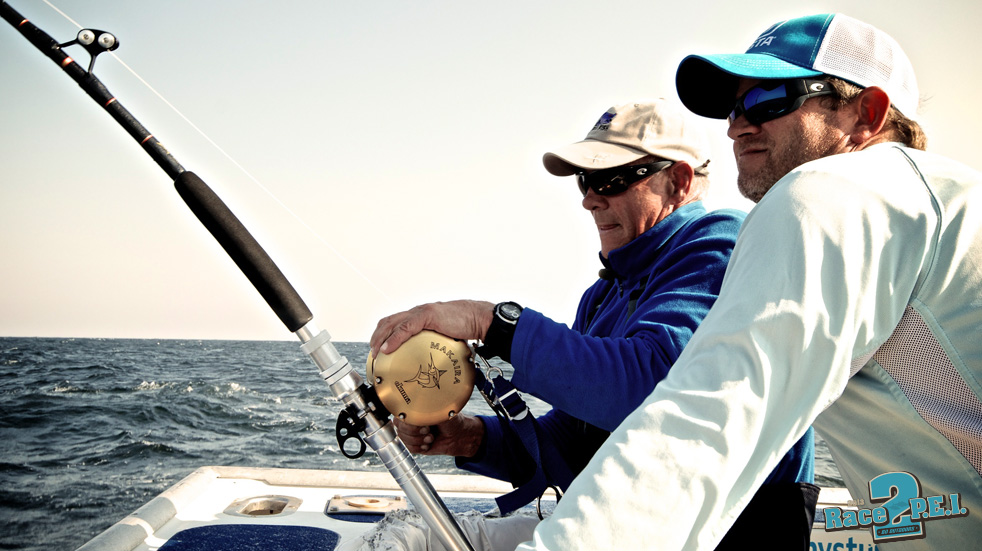 Larry Dahlberg fights a giant tuna while shooting an episode of Hunt for Big Fish. He joined the BD team for this trip to PEI. 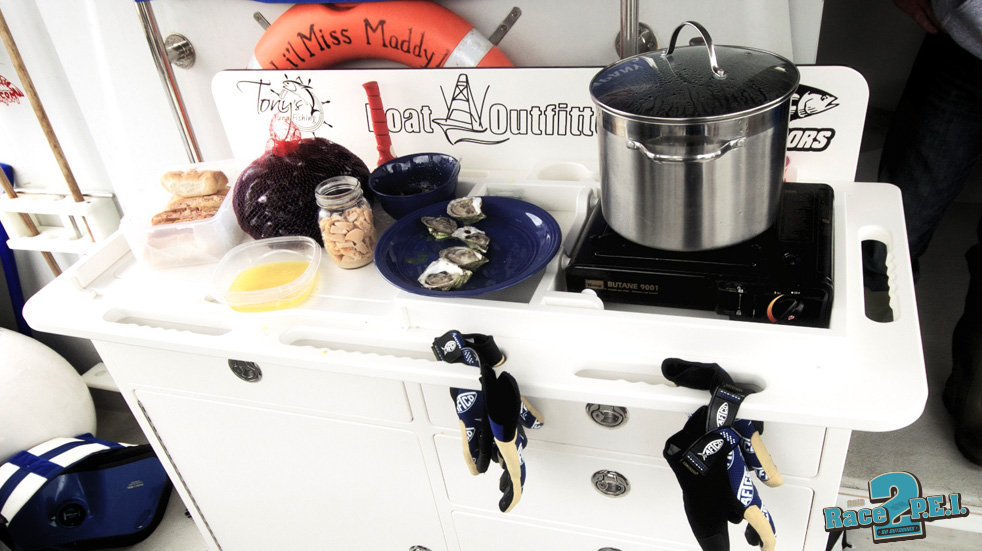 The Boat Outfitters Tackle Station was built custom for Capt. Tony’s boat. It not only organized the tackle, but held the cooking pot as well. 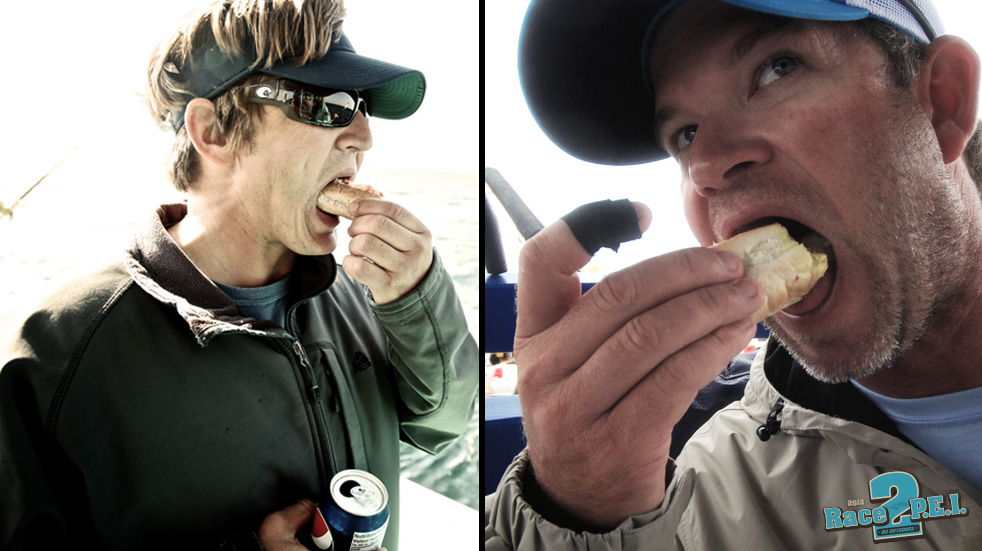 You might not be able to tell who had the biggest fish, but we can certainly keep track of who can eat the most lobster rolls. 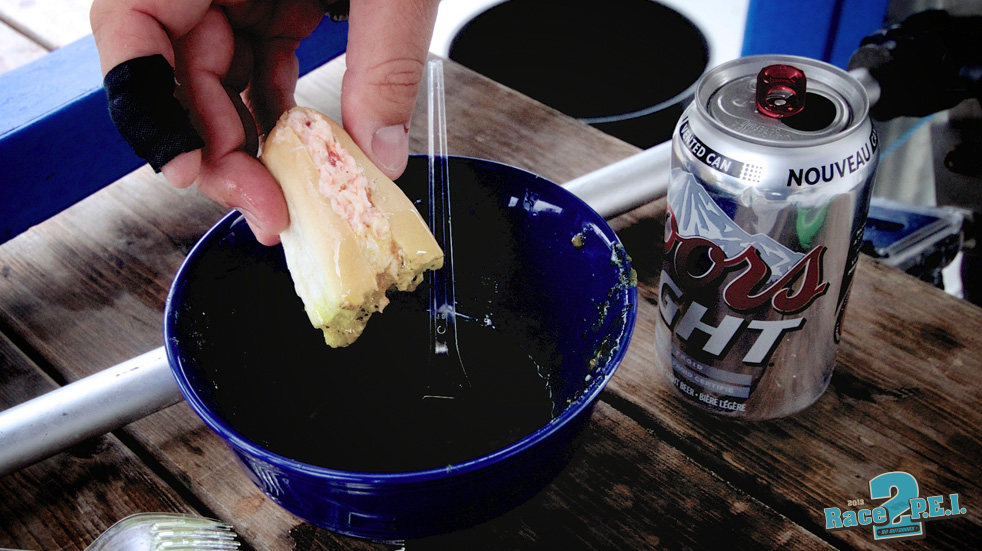 You have to be a disturbed individual to feel you need to dip your mayo-layden delicious lobster roll into melted butter. I wont identify whom the culinary criminal (or genius) was in this instance but we will give two hints. He prefers tape instead of band aids and his name is Brant. 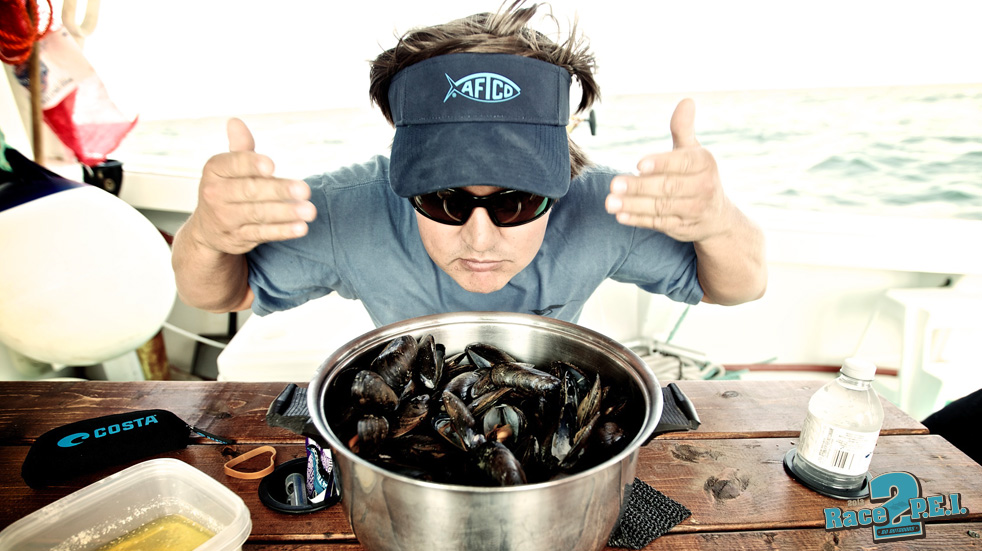 What better way to pass the time during the battle than to throw down on a pot of fresh steamed local mussels. Wow, you could get spoiled up there. It was a nice change from lobster rolls.