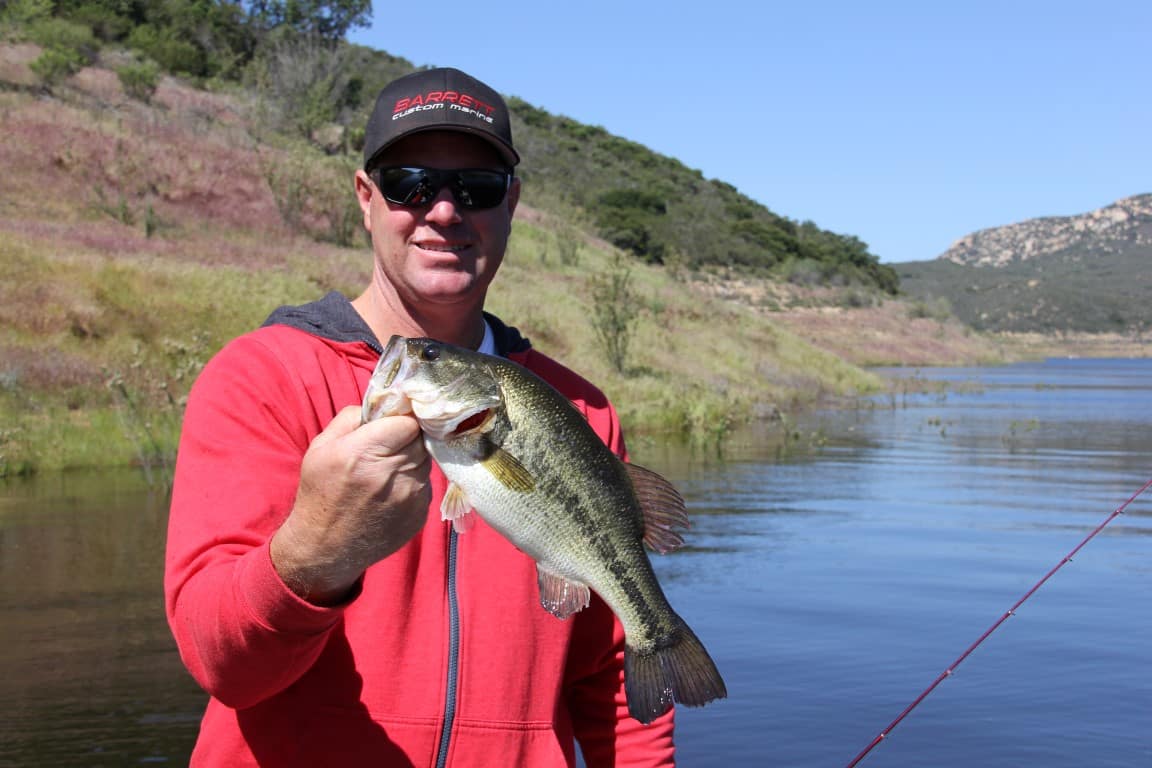 I had the opportunity again this year to fish Barrett Lake before it opens to the public. We arrived at the lake at 6 am and planned to fish all day to maximize our opportunities. The first thing that anyone who is familiar with the lake will recognize is how much water there is now after this winter’s big storms. Just getting the first look at the lake, I instantly knew this was a much different place than it was just 12 months ago. 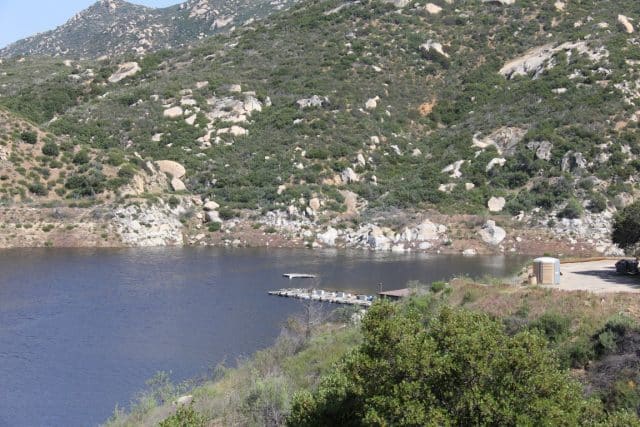 This view of the launch ramp really tells the picture. You can see the high water line and how little bank there is left below it. Last year there was close to 100′ of bank in this same spot. 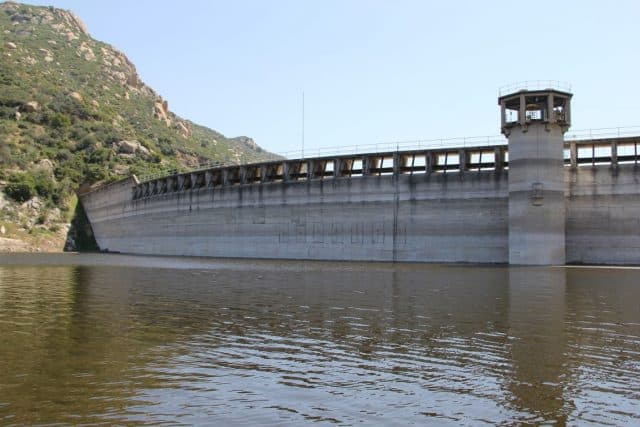 There was close to 100′ of dam visible last year, this year it appears to be more like 40′. That’s a huge increase for a reservoir this deep! 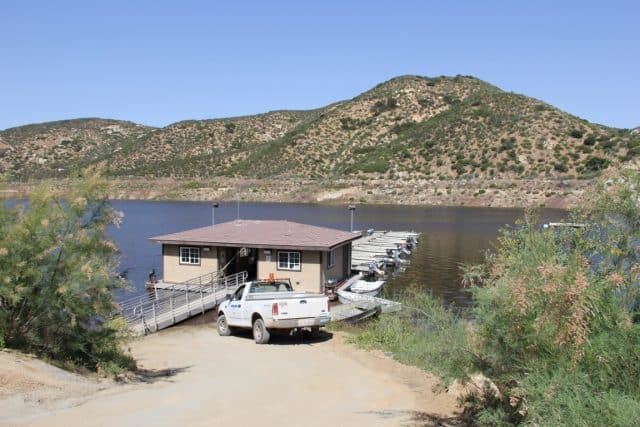 We were on the lake and underway by about 7am. As usual the first hour and a half was slow. It seems that these fish really need some sun on the water to get moving. This reminds me, if you’re coming here early, DRESS WARM and in layers. When we arrived at the lake it was 33-degrees, when we left it was 77-degrees. The temperature swings are just crazy.

Around 8:30 or so we started to pick away at them at a pretty good pace.

After a couple hours we both had 12 or 15 fish each. The fish were here, in many cases we could see them but the were lethargic for sure. Not a lot of bites by Barrett’s standards and many of the bites were really soft and we couldn’t hook the fish. 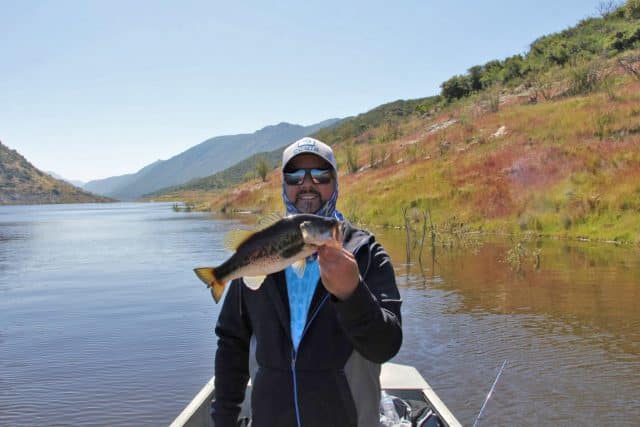 The one thing I noticed right away was the lack of fish busting shad on the surface. In every year prior, there would be boils and fish busting all along the shoreline but this year we saw very little.

We continued to pick our way along the entire lake quickly working from spot to spot if we didn’t get more than a bite or so. This allowed us to survey the entire lake and it was GREAT to see how much lake there is once again. Again and again we would see fish in the shallows and get them to lazily chase a bait but they just didn’t want to eat. 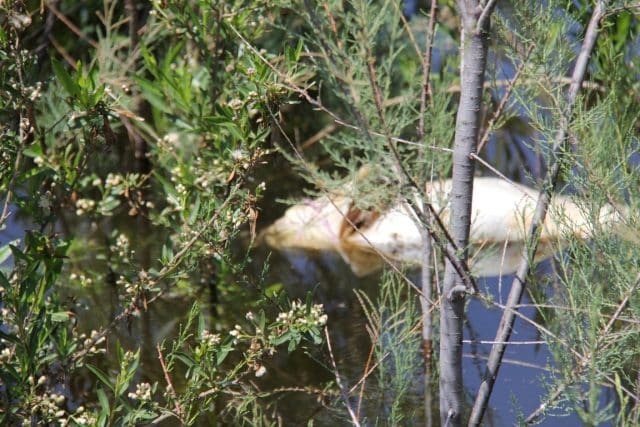 We found this really nice fish in the Honor Camp arm dead from choking on his last meal. Bit off more than he could chew I guess. 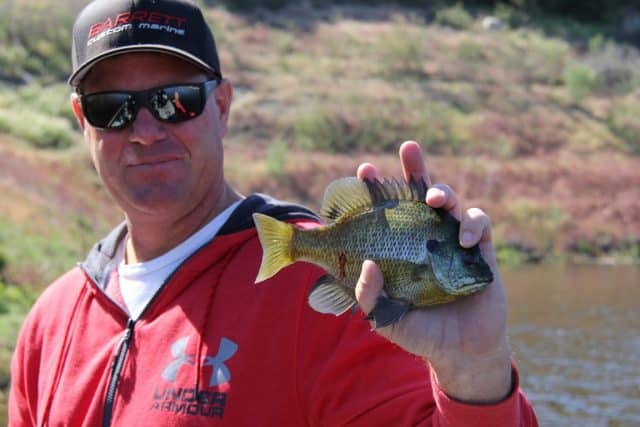 We also caught a handful of these guys on plastic worms. 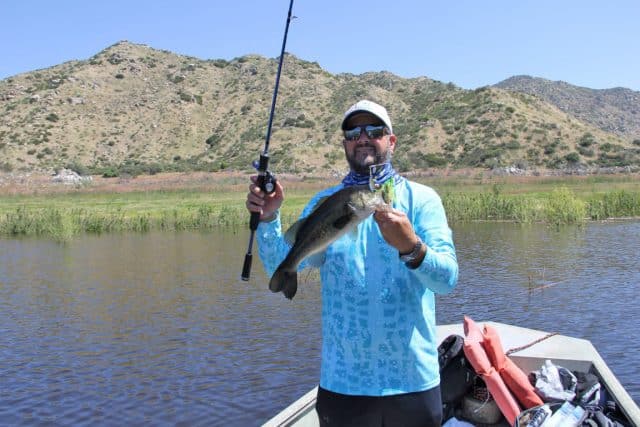 All of the fish we did catch looked really happy and healthy.

The two nights prior were very clear with a full moon. I have to think these fish were just stuffed from feeding all night. Just a week prior, Rockcod Rick and Pete Gray saw full speed action like we have come to expect. You can read their report here.

In the end we caught 43 fish between us by about 2pm. We worked most of the lake and the fish seemed scattered with no single hot spot. Most of our bites came on rock structure and a little deeper than normal. I’m guessing 6-12 feet was about the ticket.

As for baits, once again the chartreuse spinner bait was the leader with Tom’s pumpkin and clear sinko worms not far behind.

Our average fish was probably 1.5-pounds and we had a few pushing 3-pounds or so. We did see MANY 5-pound class fish in the shallows but we weren’t able to hook any.

I would also recommend bringing a trolling motor and battery. It’s a must for working the lake with the normal afternoon breeze and sneaking up on the fish.

After spending the full day pounding the shoreline it was very clear that the lake is once again in great shape with plenty of fish. I would expect another great season for the lake.

Tickets are now available on Ticketmater to fish the lake this season. Click here to get yours.

Also, remember Barrett is catch and release only and a barbless lake. Don’t forget to crimp down those barbs or risk getting a ticket.

I’d like to thank the entire City Lakes staff for making the lake available to us. I look forward to this trip every year and it’s my official start to spring fishing. 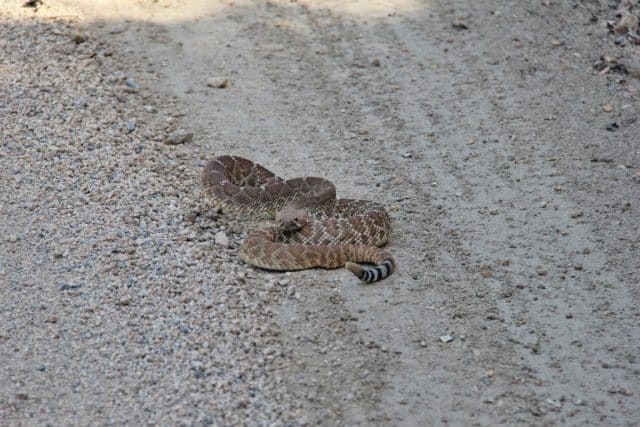 As a last note, BE CAREFUL walking around the lake. There has been a bumper crop of these guys this year and you don’t want to have a bad experience.