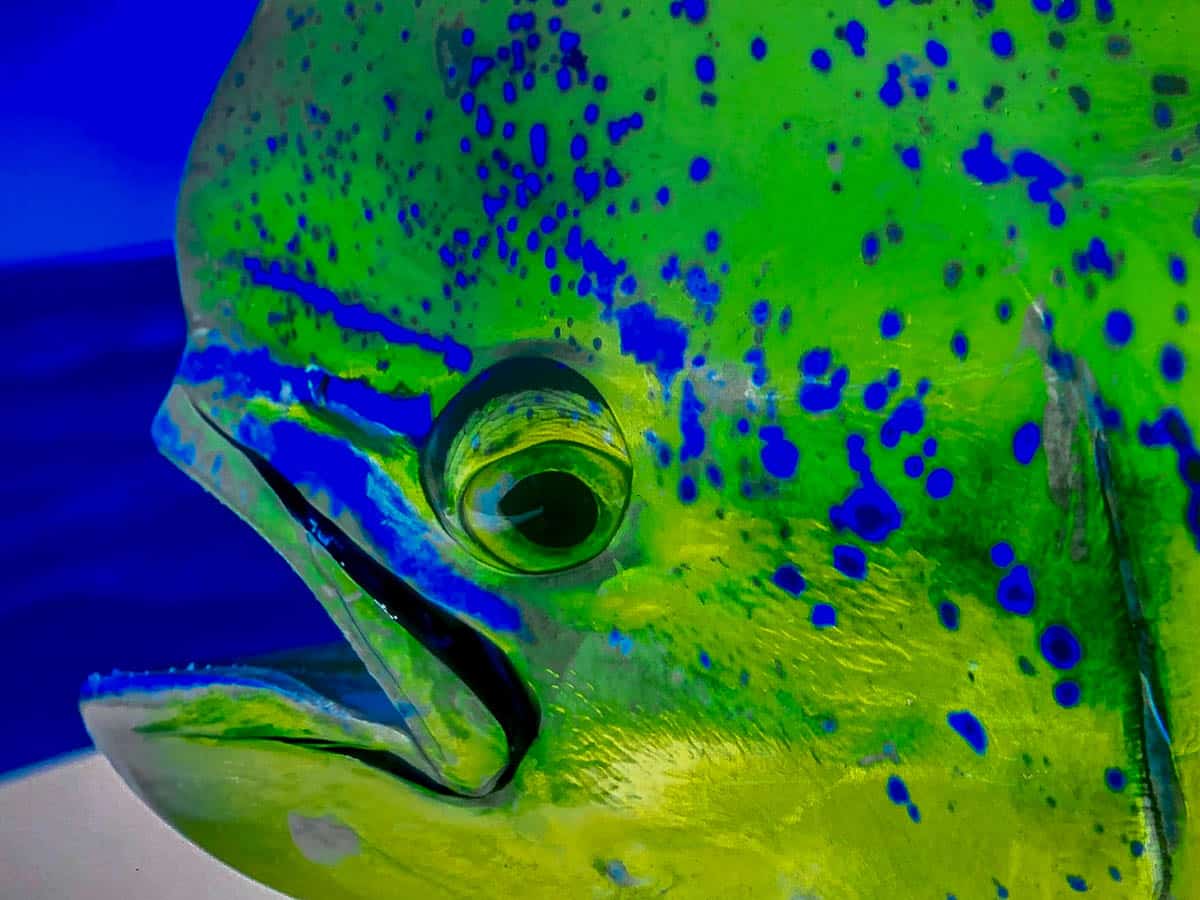 Masks, social distancing, and port closures are the norm for all of the Baja peninsula. And so far, opening dates for sportfishing, air travel, hotels, and restaurants have been changing; they have been moved forward, canceled, and left hanging numerous times. Even still rumors abound, and no one, not even government officials, seems to know when the peninsula will open for tourists again.

Our thanks to Rebecca Ehrenberg, Pisces Sportfishing, for sending the above video that was shot at IGY Marina. It underscores how rapidly the resources have thrived and bounced back as a result of the lack of pressure from the “no fishing” closure to tourists due to Covid-19 these past few months. All of the Baja Sur areas are reporting similar conditions.

Suffice it to say, when the opening finally takes place, the fishing, regardless of the targeted species, should be impressive! 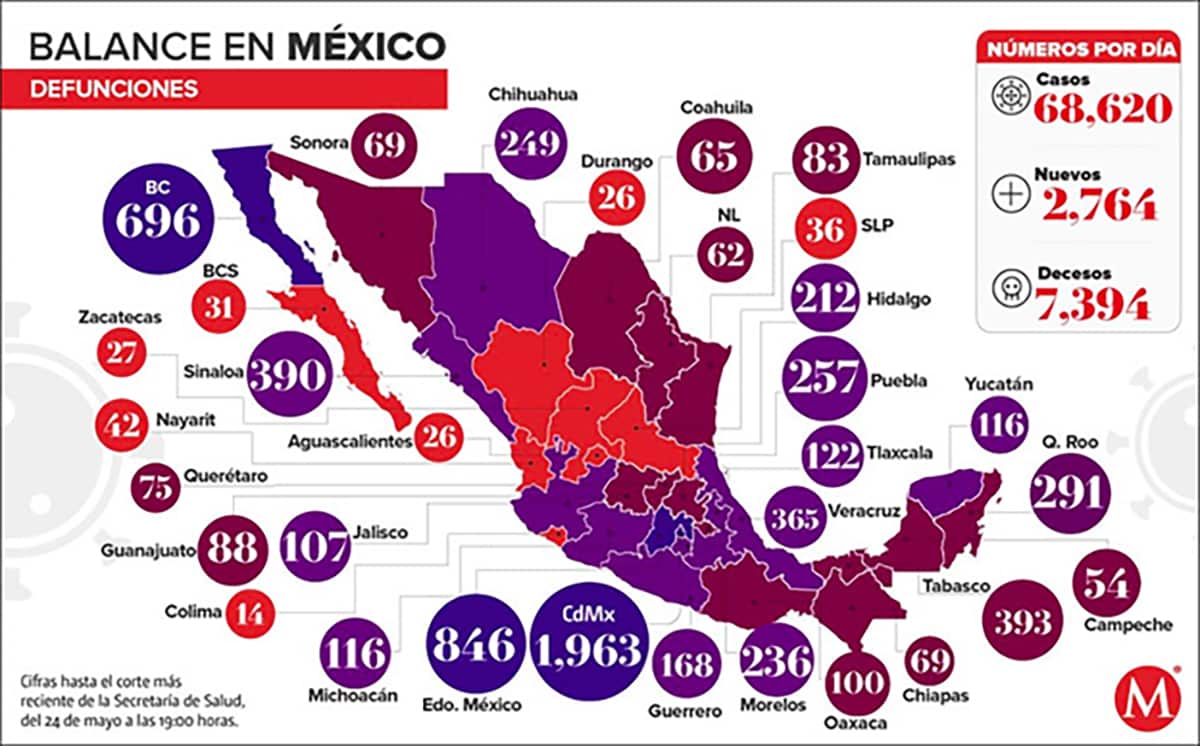 Coronavirus deaths by state. MILENIO
Two-thirds of the Covid-19 deaths in Baja California occurred in Tijuana, which has recorded more fatalities than any other Municipality in the country.
Story Link 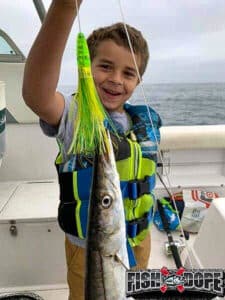 There are many barracuda found in the area. Trolled mackerel X-Raps and chartreuse feathers are the best bets.

I also got a fluke calico on a colt sniper while it dangled in the water when I took a barracuda off of my son’s line, plus we got a rockfish on a dropper loop with a gulp bait.
Cheers!-Brian Semper Fishing …Fish Dope

Coronado Islands / Rockpile
Water temps have dropped a degree or two, and the water clarity is down a bit as well.
There are yellows around, but not in any big volume. On top of that the fish seem to be moving around quite a biter – they are very “hit and miss.” One area that was good yesterday might be dead today.
That said, over the past week yellowtail have been caught at Pukey Point, the Keyhole, and the lee side of North Island…Fish Dope

The Middle Grounds and the Gun Site have both had some yellowtail. Ribbon Kelp and the Lighthouse at South Island have also seen sporadic yellowtail bites. There were reports of yellows near the Pens, but we strongly recommend you stay well clear of those.

Some are also catching a few mixed-grade bonito and small numbers of barracuda. The latter (nearly 100%) are coming from Ribbon Kelp and the lee of South Island.

Lastly there is some decent fishing right now for calico bass. The lee side of North Island, the boiler rocks around the Middle Islands, the north end of South Island, and the kelp in the lee of South Island are all seeing action for big bass. Lots of them are up in the five to seven-pound class …Fish Dope 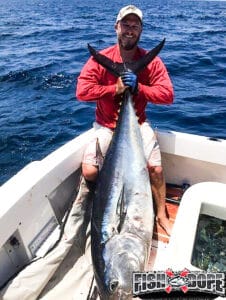 Still, there were plenty of boats zig-zagging back and forth, trolling the kite or yummy flyer, and boat fishing the kite/balloon dead flyer rig. If I had to pick one method, I would go with the dead flyers, but those things are expensive, and right now guys are getting bit on the yummy flyer so…

Much of the attention today was spread from roughly 32 09 down to 32 00. The boats were also out as far as 117 28 and into about 117 15 with a few exceptions in as far as 117 10.
There were also a few reports of yellowfin, most of which were coming on long soaked sardines on 30# to 40# fluoro while drifting and also while fishing the balloon/dead flyer rigs.
Word of Advice;
Please use extra caution: The boats are moving around a lot and most of them are dragging very long lines out to kites and bait. You need to figure out which way they are going LONG BEFORE you get up to them…Fish Dope

Closed. Only locals can fish for food with masks and social distancing required…Mara’s Sportfishing Ensenada 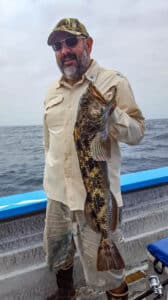 I was happy to go check in with the parents and make sure the house was still standing, but I was able to make it out for a short trip and did well. It meant I had to work for them but we had a fun time…Fishond
https://www.bdoutdoors.com/forums/threads/erindira.745949/ 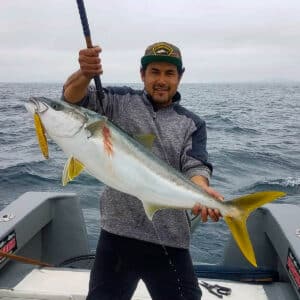 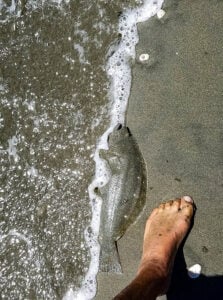 Another “tater chip” released today near the house. This time on the Kroc and the right gear…Daniel Powell 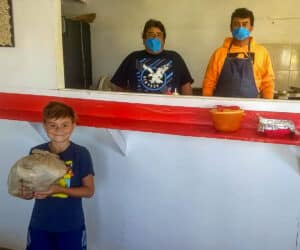 Light at the end of the tunnel! Tacos Don Ramón opened this weekend for takeout and the shrimp & fish tacos were better than ever!… Shari Bondy 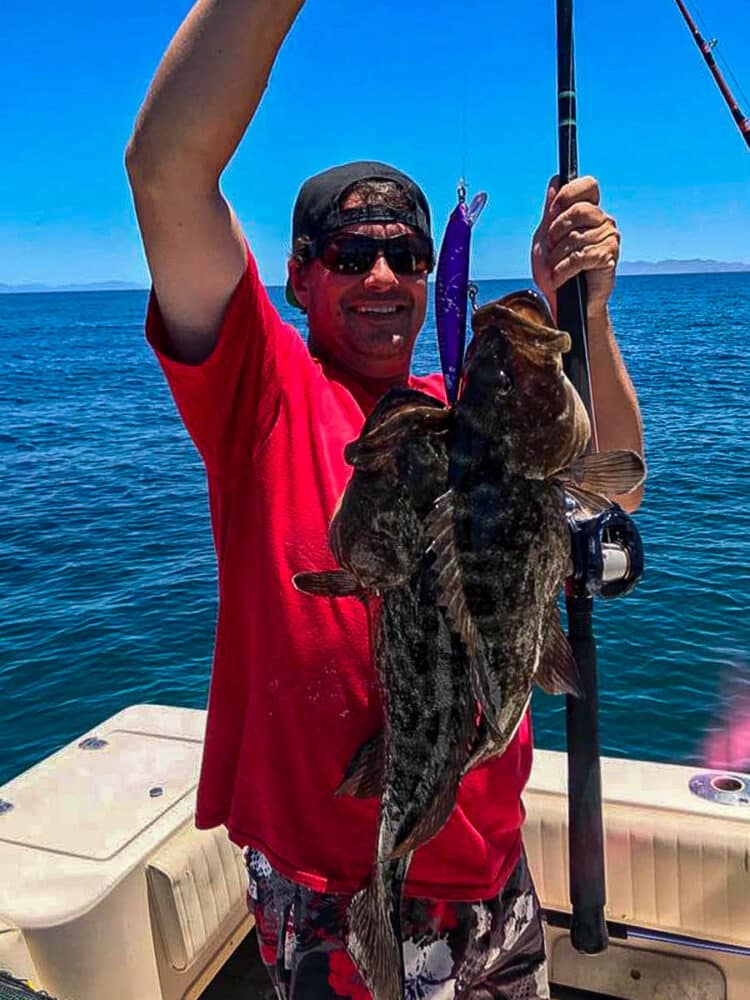 Gordon Ecv West The Sardinera were hungry – two for one.

Seabass are biting! 61-pounds on a swimbait and my bass rod. Several others also caught
Bass fishing is definitely picking up. The surface iron bite is coming alive
Yellows have slowed down on the South End.
Water temp dropped 2 degrees but the weather has warmed significantly so I’m sure the water temp will follow. Red crabs by the millions everywhere...Jeff Mariani-Cedros Tackle 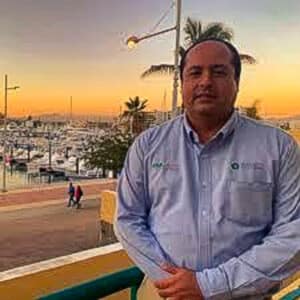 In a radio interview, Fernando Hoyos, Director of the Cabo San Lucas Comprehensive Port Administration, spoke about the Intercontinental Conference in which minutes before he had just participated, along with representatives from all the Ports of America.

To plan the return of port activities and with the help of the competent authorities, a circular of recommendations and guidelines was drafted so that service providers and vessels take them into account, as are the work protocols that will now change to ensure the health of the arrival personnel and passengers.

The use of disinfectant products was also discussed since the use of chlorine in ports is restricted by marine pollution it produces.
All boats must be sanitized before and after boarding, as well as at the closing of activities.

The first attempt to open operations at the port is expected from July with the return of the cruises.

Likewise, several renovations have been completed in the port, taking advantage of the temporary suspension of activities in the marina.

The water is warming up enough to keep the few marlin from last week in the area. Last week’s bunch of billfish have been joined by some others, bringing the total to what one captain described as, “tons of marlin and sailfish.”
These billfish have been hanging out close to town and the big assumption is that there are dorado out in bluer water as well.
Not much talk about triggerfish and pinto bass. Yellowtail and cabrilla are another mystery blowing in the wind, at least this week. 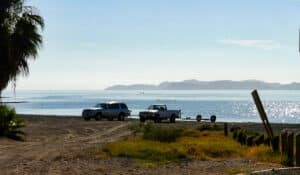 It’s not perfectly clear when the chain at the boat ramp will be put back in storage. I have heard “June 1” and “July 1” among the chatter.
I guess that will be the surprise we should prepare for. The other huge surprises are waiting out in deeper water.
Whenever it happens, the first few weeks won’t be packed with nonstop action for lots of boats.
It will take a while for travel and tourism to get back swinging. The fish are here and gas prices are down. Time for hunting in the blue water…Rick Hill, Pinchy Sportfishing
La Paz

Delegacion de Los Barriles is with Luis Enrique Lucero and 11 others.
IMPORTANT INFORMATION
The delegation of Los Barriles reported that from Monday, May 25, will be working “ONLY” in the following areas:
• Office of the Delegate.
• Municipal Collection.
• Mail from Mexico.
• Secretary of Welfare.
On a schedule from 9:00 a.m. to 1:00 p.m., Monday, Wednesday, and Friday.
In turn, SAPA will be open on the same schedule on Tuesday and Thursday.
Garbage collection will perform its normal routes and schedules.
Civil Protection is working on its regular schedule.
It is recommended to address the following recommendations:
1. Use Mouths Cover.
2. Don’t wear escorts.
3. Disinfect your hands with gel at the entrance of the delegation.
Let’s stick together and respect the recommendations in the face of this health contingency. 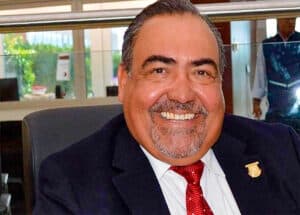 Fishing tournaments, opportunity to stimulate the economy: Van Wormer
San José del Cabo, Buena Vista.- One of the opportunities that come to the East Cape despite the complexity of the COVID-19 pandemic is that the fishing tournaments have not been canceled and with this, they hope to recover 50-percent of the tourist occupation at the end of the year, this was considered by the local deputy, president of the permanent tourism commission, Carlos José Van Wormer.
Complete Story

These were on his boat, the “Jaqueline.”
Larger tuna out of San Jose also. Gonzalo Castillo, Captain of winning tuna on “Sirena” last year, and Arturo his brother, landed some nice-sized tuna.

Cabo side for marlin, much calmer at 1150 spot although not many getting out there. Great ROOSTERFISH bite right now, some good yellowtail and still some good cubera and snapper! Dorado spotted inside Marina Del Rey by the old cannery and fuel dock, and jack crevalle have been making their way into the Marina, all chasing after lots of ballyhoo (bait)…Rebecca Ehrenberg, Pisces Sportfishing

Cabo San Lucas
New to the fleet, the 38-foot “REEL CAST” Crew and Owner, headed out on the San Jose side and had three striped marlin.
A report in Cabo – The port was closed most of this week. Only one day was allowed for fishing and “Chasin Tail’,” Capt Pepe de la Pena went to San Jaime Landing with around 20 yellowfin tuna weighing from 20- to 40-pounds; the weather conditions? LOTS OF WIND! 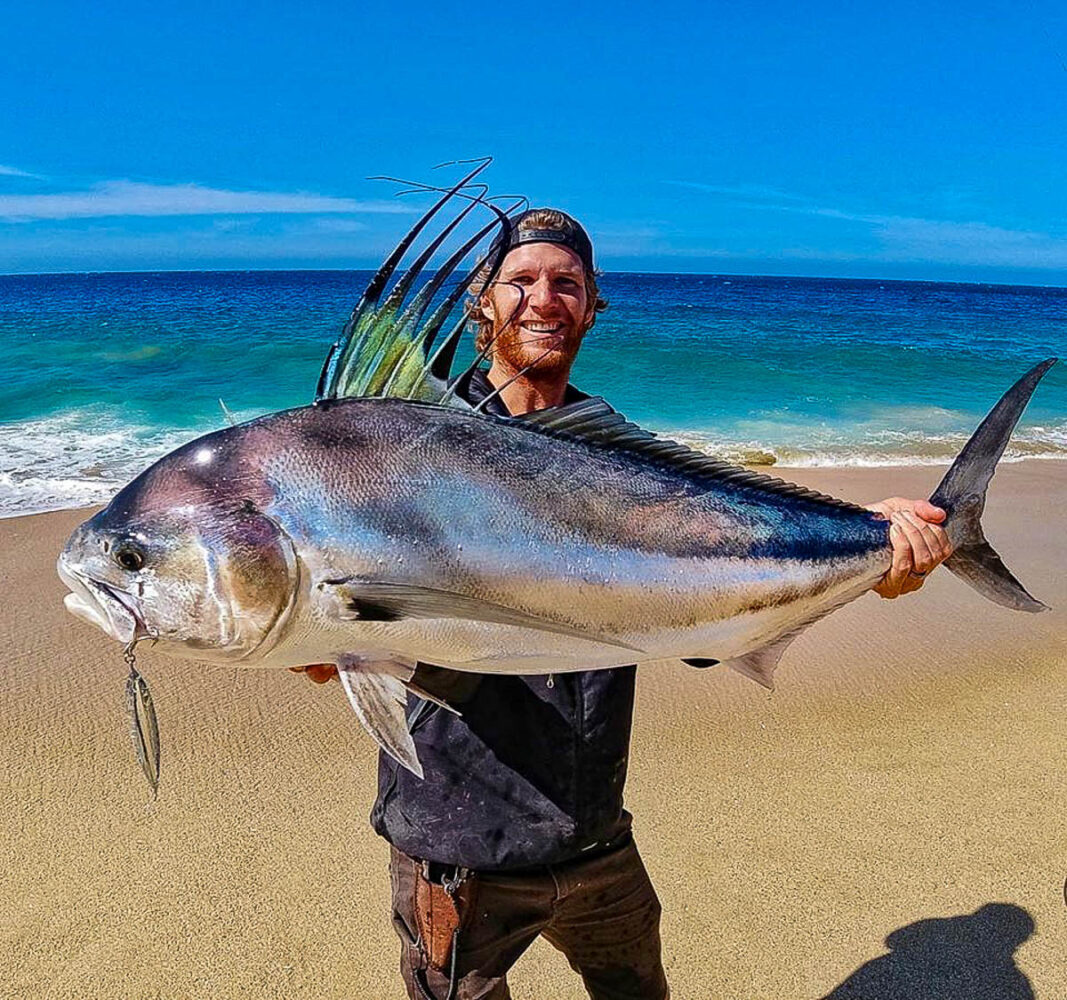 HIGH TIDE was when the fish decided it was time to eat!!
We fought, we took pictures together, and we went our separate ways!
What a fun ROOSTER…Wesley Brough-Cabo Surfcaster 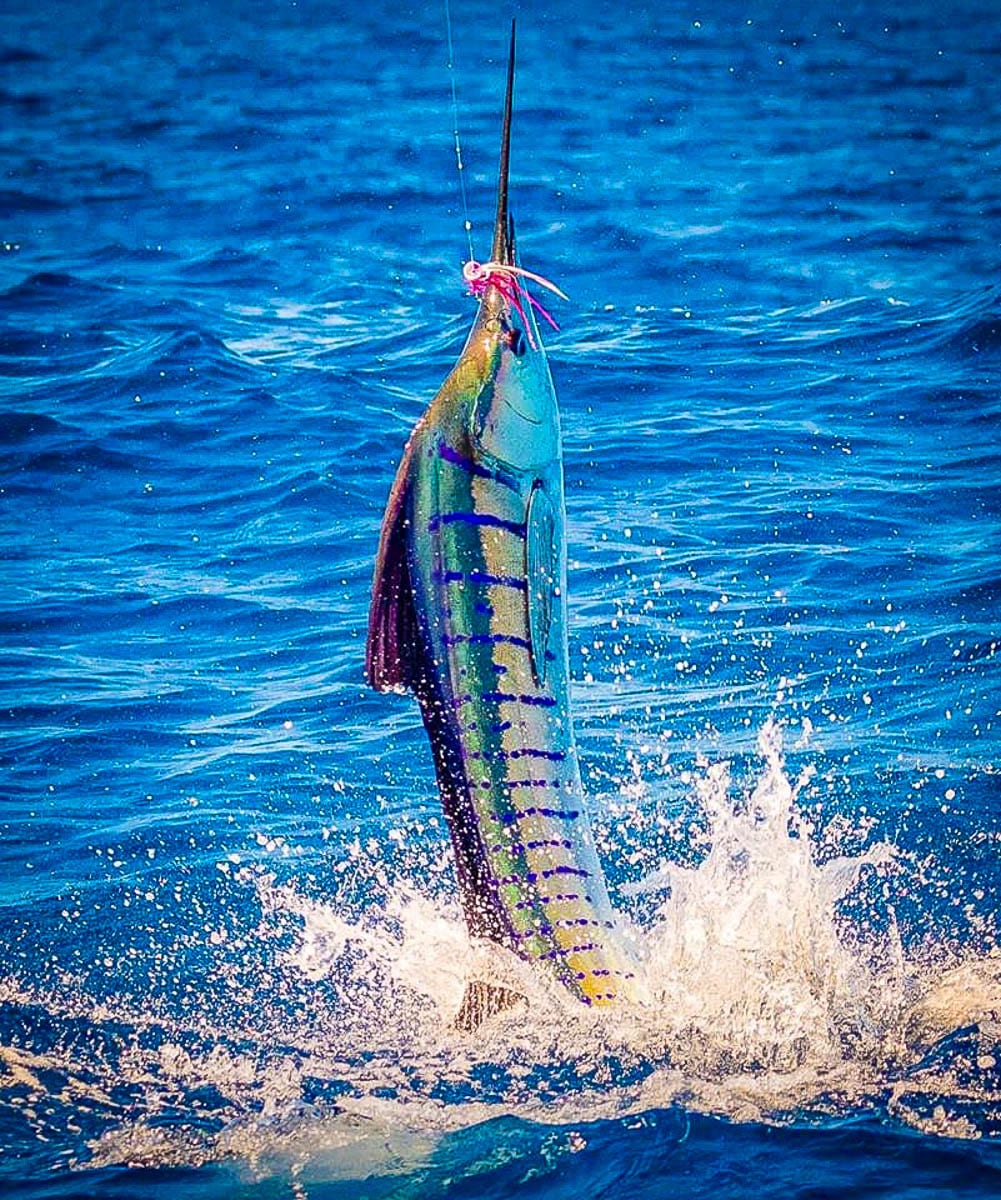 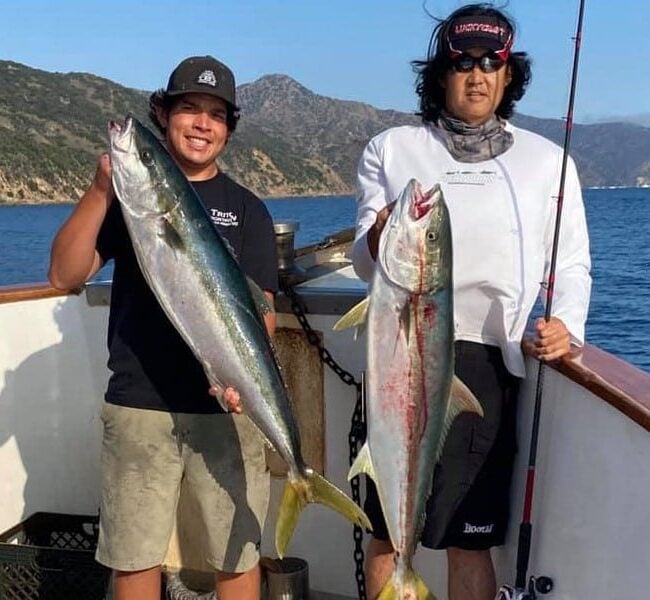